Most people who glimpse this strange glowing boulder emerging from the hilly landscape between the countryside and the walled market city of Plasencia, Spain will only do so while passing by at high speeds in a car. That’s why architects José Selgas and Lucía Cano of the firm SelgasCano “planned it as a snapshot or a luminous form, acting as a sign for passengers by day and by night, playing at being a correspondence between sensation and reality, between the position it seems to be heading for and the position from where it will move.” 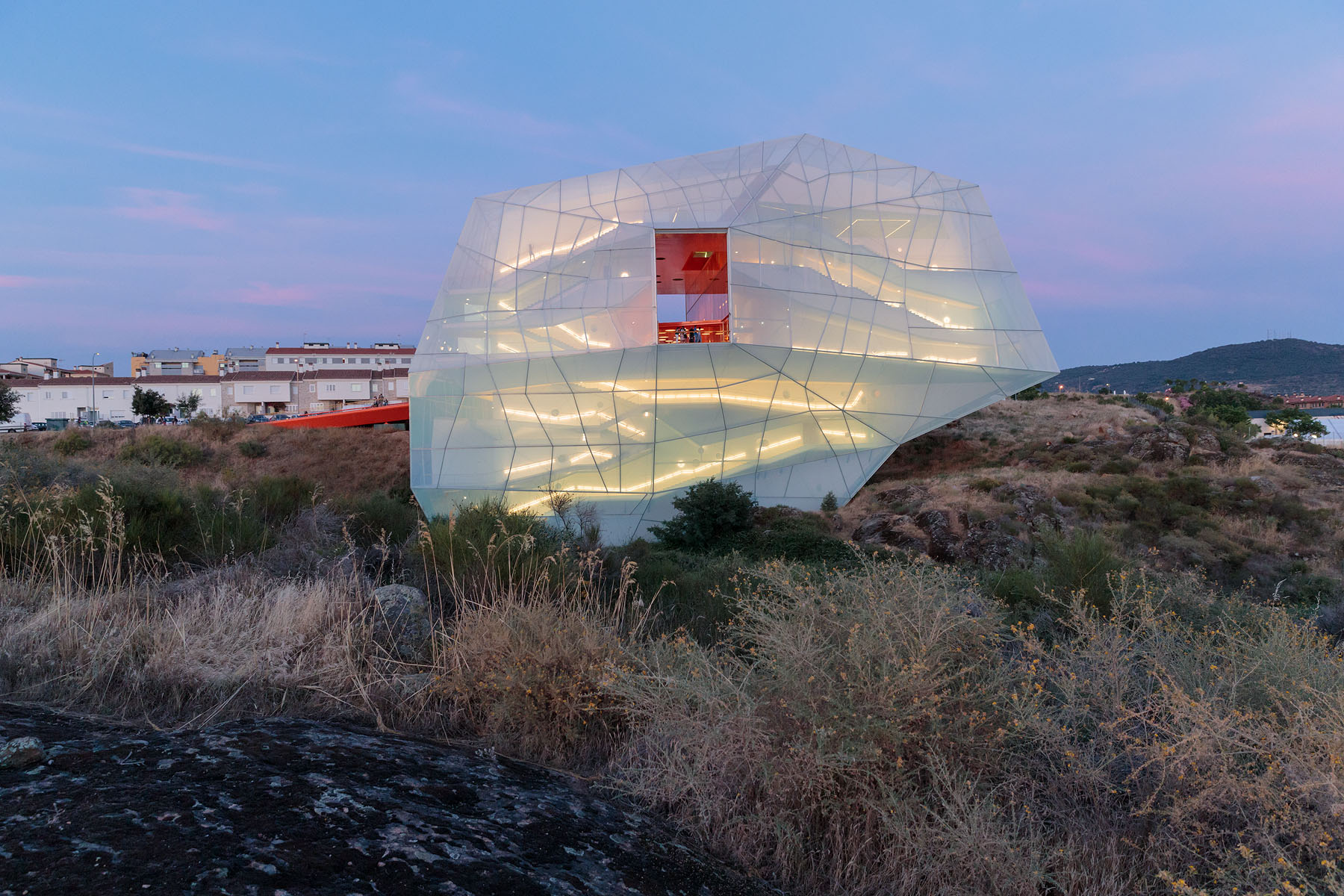 Continue reading below
Our Featured Videos
The faceted translucent exterior of the Plasencia Conference Center and Auditórium may give it an amorphous appearance from the outside, but it actually conceals a complex multi-layered floor plan full of vivid colors and dynamic spaces. The building is a contradiction in terms, appearing both organic in form and utterly alien, gleaming in all its artificiality over the rugged natural landscape. Occupying a steeply sloped plot on the side of a hill, it seems delicately balanced. Its perched position beside a retaining wall and parking lot reflects a need to impact the rocky landscape around it as little as possible — to the point where it physically juts out at one end. 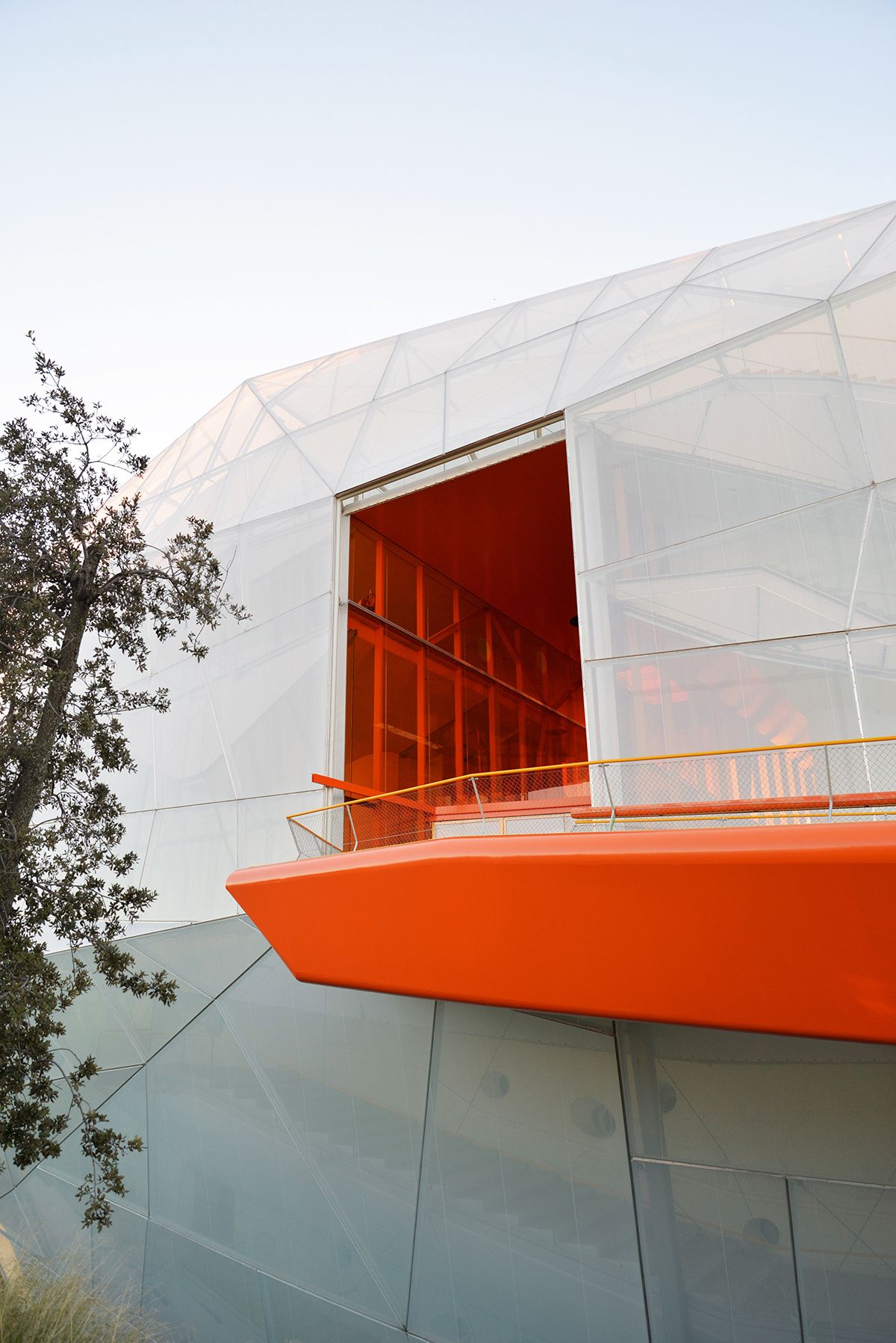 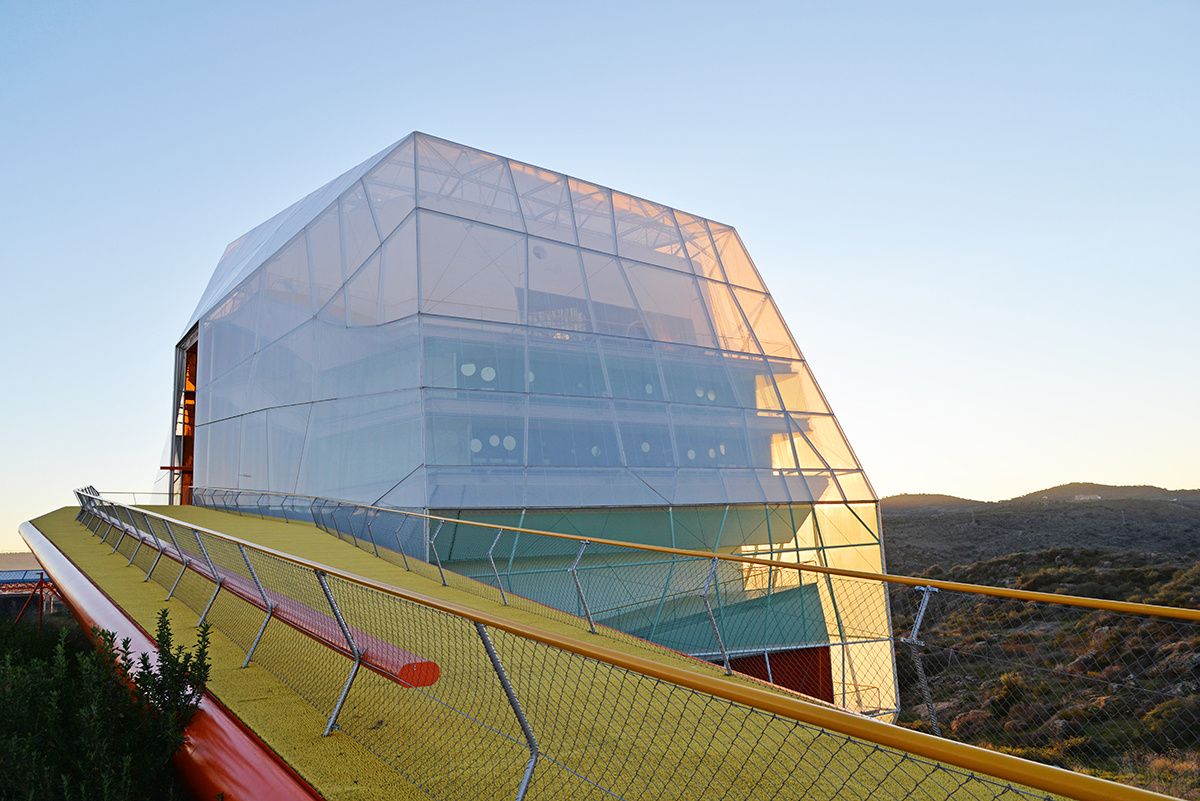 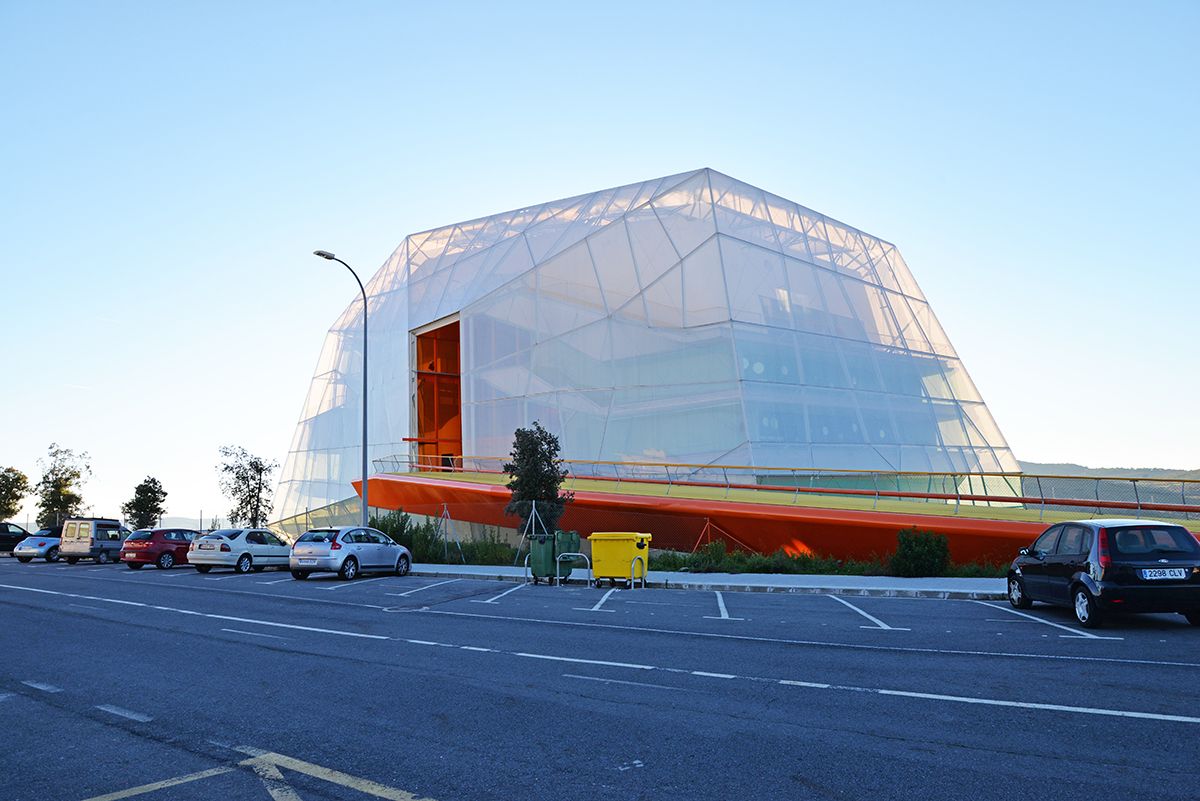 The semi-translucent ETFE panels wrapped around the conference center give it the look of an enormous lantern by night, similarly producing a skin-like effect by day as visitors access its scarlet innards. Comprised of an entrance lobby, a secondary hall for 300 guests that can be divided in three, a restaurant, and exhibition halls, the building is accessible via the bright orange gangway that cuts a stark diagonal line across its facade.

“From here it is possible to move all around the central concrete shell, [going] up or down on a set of ramps and spiral stairs that mingle exterior and interior spaces,” explain the architects. “This is for two reasons, economy and expenditure. Economy by not climatizing or using glass to enclose certain parts. Expenditure due to a crossing of spaces — in-out-in on account of the mixture of their climates.” 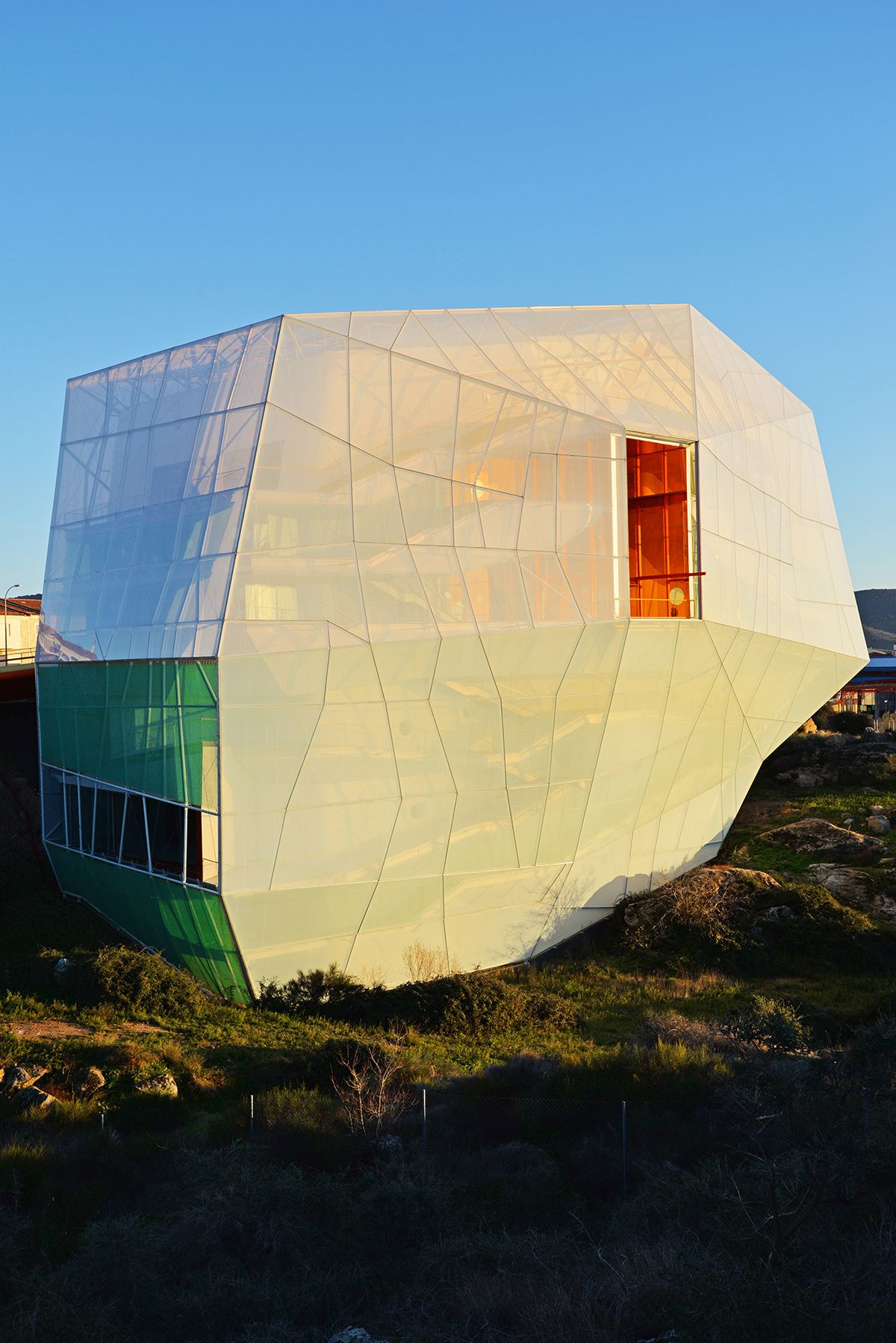 The architects see the project as a midpoint between urban life and what’s left of the wild after human intervention. One side has been altered by our own activity, the other by only climate and wildlife. Everything that’s been touched by humanity “has covered up those millennia with the sweep of a trowel in a few years.” While it’s certainly artificial, the Auditórium aims to show maximum respect for the land, and with that goal in mind, it’s designed to be dismantled. 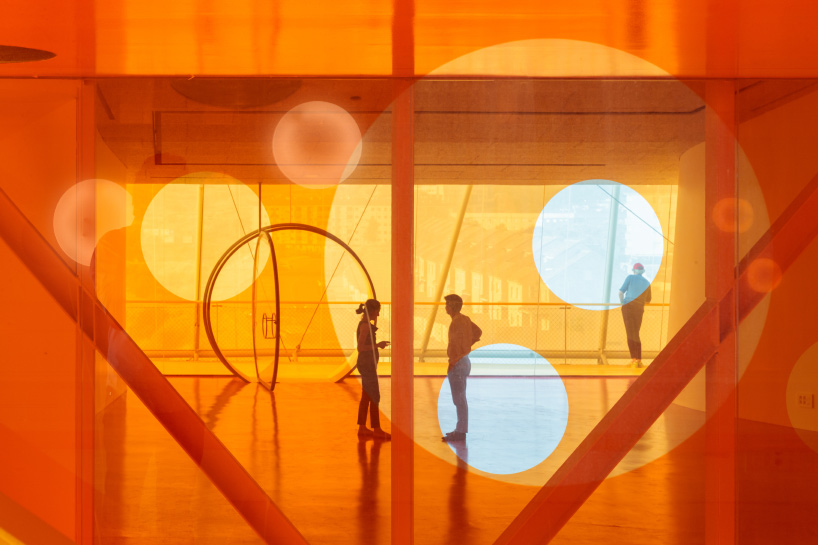 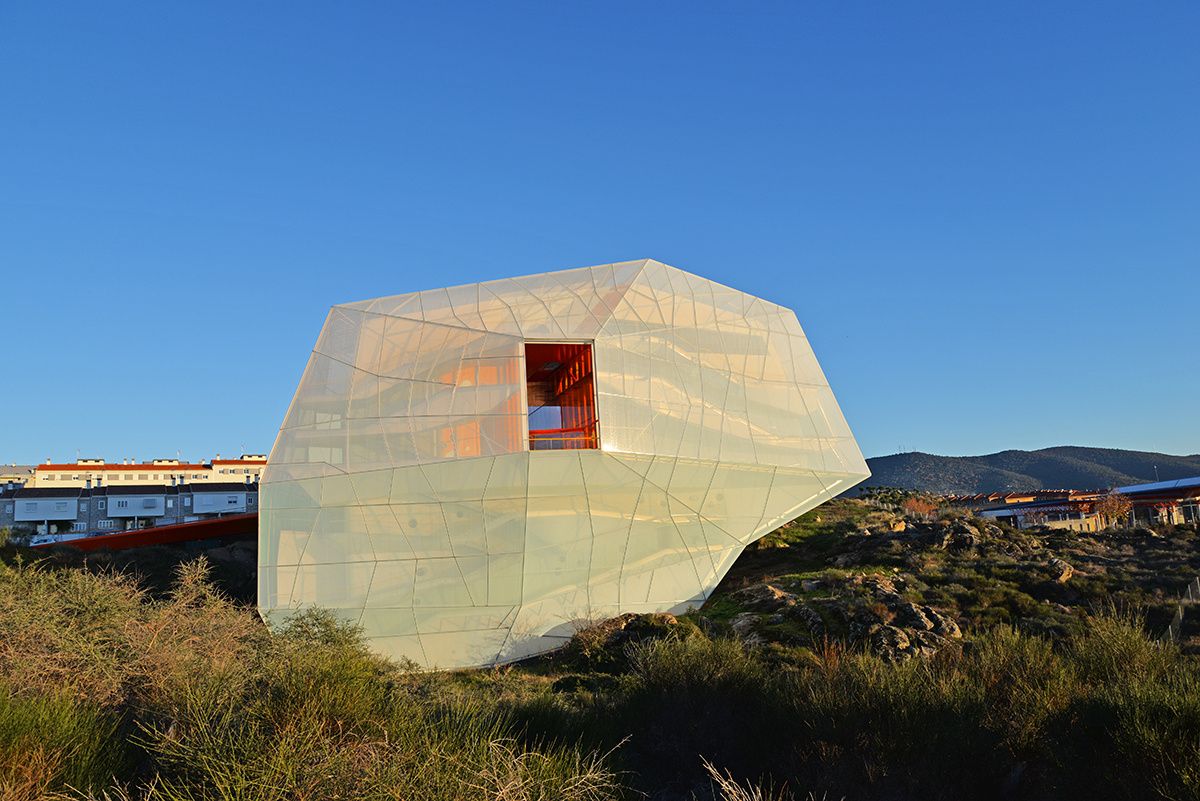 The space the conference center now occupies represents a preserved island of natural earth in a future expansion zone, even if it’s ultimately little more than “a small puddle in the sea” among the construction that will inevitably spring up all around it. One could argue that such a tourist-drawing development as the Auditórium can’t help but contribute to continued expansion and its negative effect on the environment, but the architects see the transition from untouched wilderness to suburban sprawl as a kind of unstoppable force. At least this way, some small part of the hillside will remain as it has always been.