Urbanization is dramatically transforming Vietnam, ushering millions of people away from their quiet, slow-paced rural lives into cramped urban living spaces within hectic cities. Ho Chi Minh City-based architecture firm 23o5 Studio has some strong opinions about what this means for their country and culture. Encouraging people to live separately from nature isn’t progress, they argue, but “disorder and vandalism.” The mass transition away from wide-open lands dotted with fields and rivers to overcrowded cities fosters a collective anxiety that pushes people apart and leads them to spend more time alone in their homes, despite being physically close together. Could this be alleviated by designing urban homes that feel more like sanctuaries, giving residents a sense of peace and calm? The architects think so. 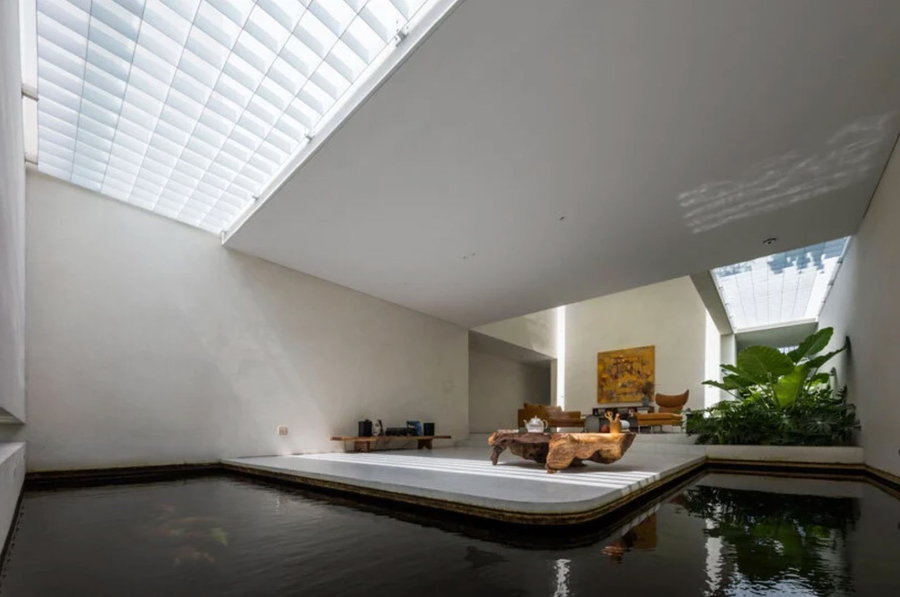 That’s why the firm focuses on designing homes that feel connected to nature and as peaceful as a monastery. 23o5 Studio isn’t trying to force rural architectural vernacular into urban settings, though. Their designs are modern and well-suited to their environments, often made of concrete. But each one is envisioned not just as a shelter, but as a place that makes you forget all your worries the moment you step in the door. In 2015, they completed “Longcave,” located in the city of Vinh Long, a long and narrow home that blocks out views of direct neighbors and city streets while bringing in elements of sunlight, water, and living greenery. Now, with “Longcave 2,” the architects have taken that sense of serenity one step further by introducing an indoor fish pond that surrounds the main living area. 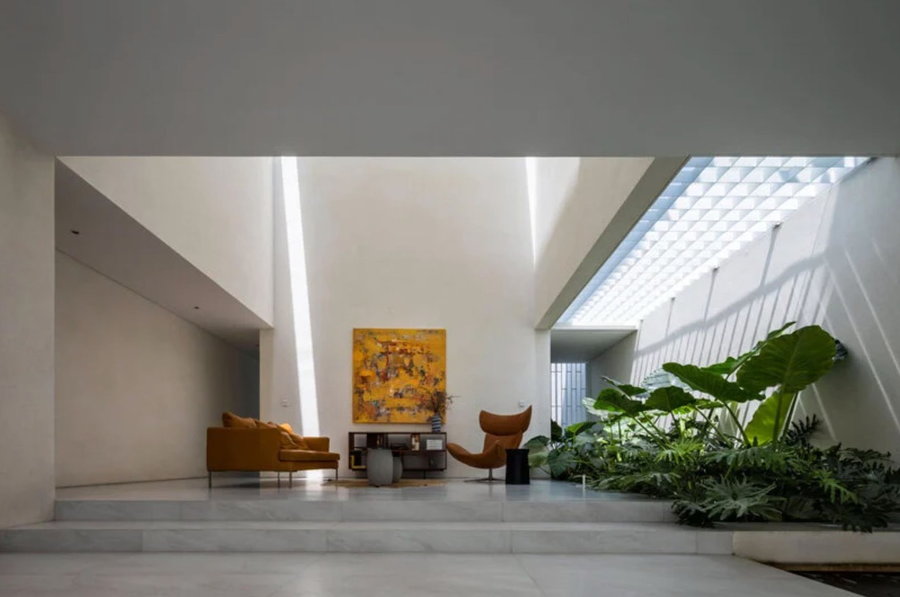 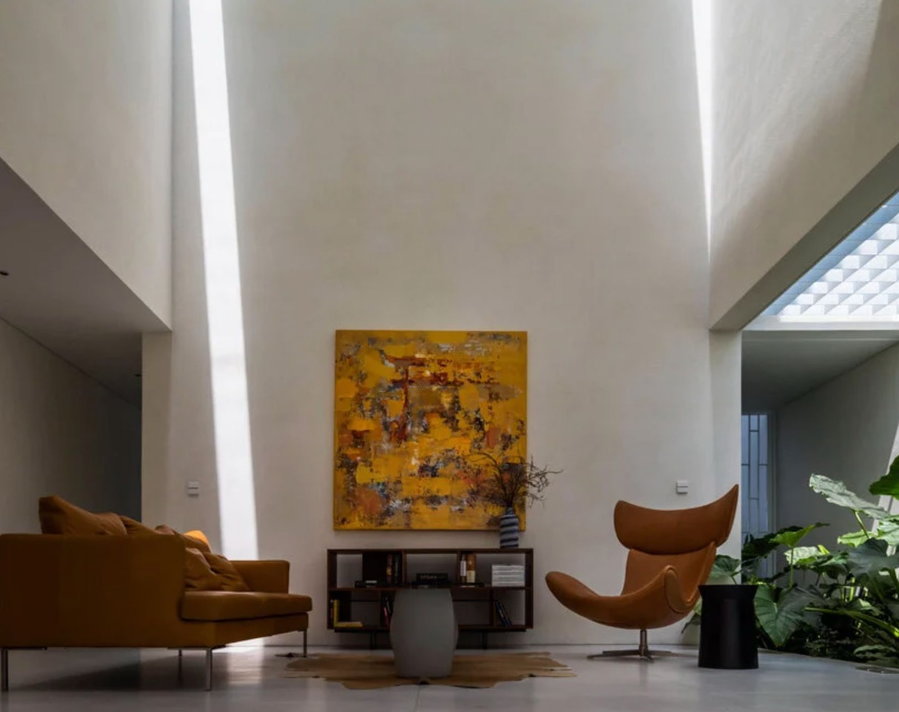 Inspiration for the project came from Hang Son Doong, a cave located with the UNESCO-listed Phong Nha-Ke Bang National Park. It’s the world’s largest cave when measured by cross-section, renowned for its spectacular underground rainforests, unusual formations like cave pearls, rays of sunlight streaming through natural openings overhead, and placid pools full of fish. From the street-facing facade, the all-white home doesn’t look like much, but that’s because the wonders within are only visible to the residents and their guests. 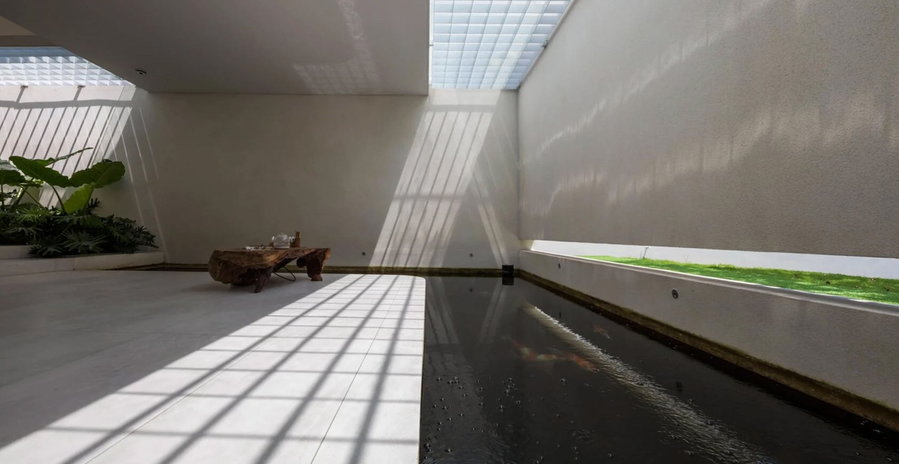 The architects conceived the home as a series of voids. Like the original Longcave, it occupies a long skinny strip of urban real estate measuring about 32 by 164 feet. Indoor spaces are staggered with perimeter walls and private courtyard gardens to encourage a sense of discovery. The primary living spaces are completely open and lacking interior walls, their areas defined instead by the positioning of skylights and double-height atriums. The dark ribbon of water forms a perimeter around the living room and tea room, koi glittering beneath the surface. Rays of sunlight piercing the skylights, broad-leafed tropical greenery, and the feeling of openness combined with varying ceiling heights do, in fact, make the home feel like a cave — in a very good way. 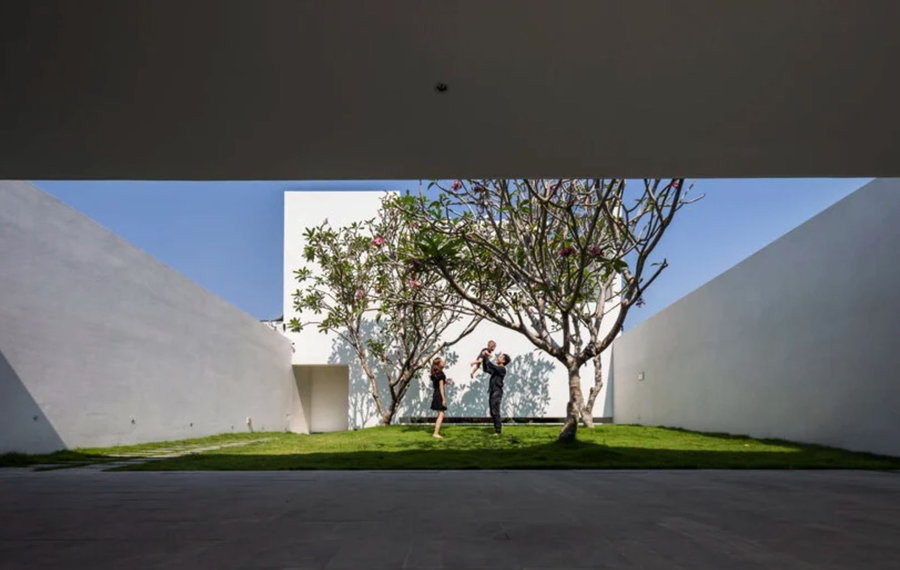 “With thoughts create a place, not just a house, but it is where emptying anxiety, fear, the only remaining calm,” the architects say. “’The Longcave’ is inspired space section of Son Doong cave, and human life in the initial period of the cave. When stepping through a door and step in space without walls, the space is a combination of the voids. The different sectional shape for the same equivalent area create different feelings for each space. The boundary between inside and outside is blurred away. Light is deliberately set up with zones that directly and indirectly separate the space into different components: light, materials, transitions, tranquility.”

Obviously, homes like this are out of reach for most urban residents in Vietnam (and virtually everywhere else in the world). A private oasis in the middle of a dense, highly developed city is a luxury, especially when it’s as beautifully designed as Longcave 2. One can only daydream about a reality in which everyone is deemed significant enough to deserve access to the comforts of nature left behind as society urbanizes. Who’s ready to campaign for skylights, courtyards, and indoor pools for all?