The concept of a “man cave” doesn’t come without controversy — mostly because it conjures caricatures of overbearing wives waving rolling pins at their husbands for putting their feet up on the coffee table, sending them scurrying away in search of more casual (and ostensibly less clean) environments. Yes, you could write an entire dissertation on man caves, the implication that the home is the woman’s domain, and the notion that gender makes us so different that men need entirely separate spaces to stew in their masculinity. But in a world where simple things like soap and writing instruments are still being marketed separately to men and women, the man cave, “manland,” or “mantuary” doesn’t seem to be going away anytime soon. 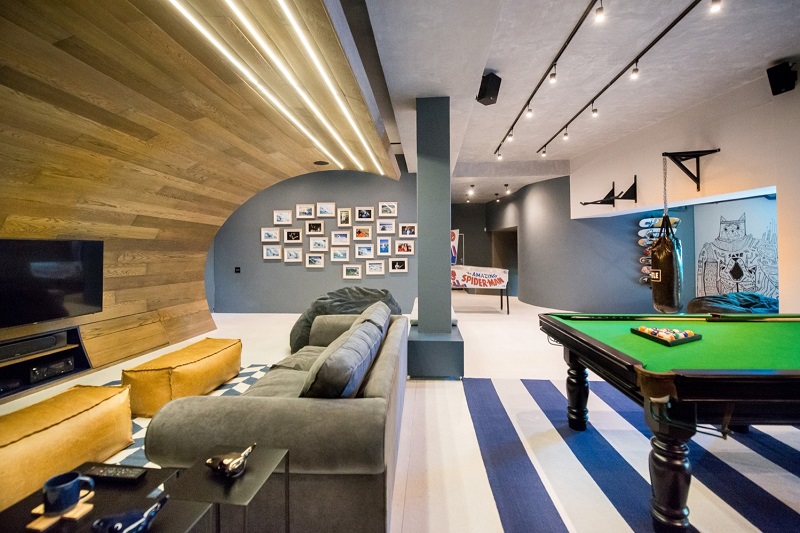 Most commonly associated with sports, leather furniture, pool tables, and refrigerators dedicated exclusively to beer, man caves are seen as places where men can relax and be themselves. In the popular imagination, these spaces are ugly, gleefully disheveled, and probably smell a little funky. But some proponents of the man cave argue that they can be just as thoughtfully designed as any other interior space — all it takes is the incorporation of a few decidedly “masculine” features and aesthetic sensibilities. 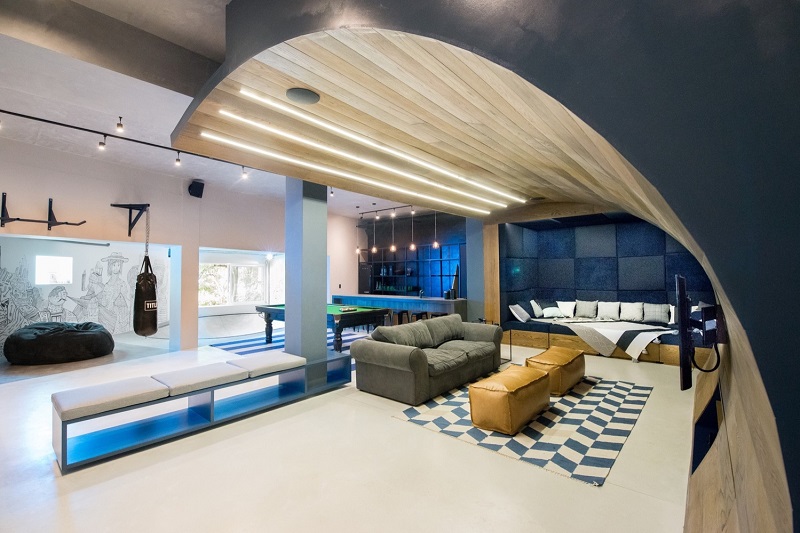 This spacious lounge by Inhouse Brand Architects in Cape Town, South Africa is one example of a refined take on the man cave trope. Measuring just over 2,000 square feet in size, it occupies a previously underutilized segment of a luxurious residence, providing a new “industrial-inspired dream pad” for the family’s teenage son and his friends. The designers tailored the space to his interests, which include skating, surfing, playing pool, and watching television. 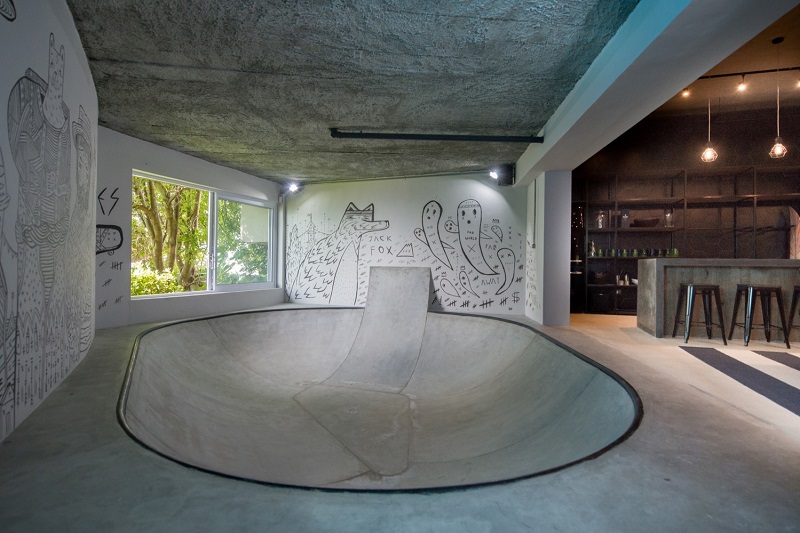 In fact, a private indoor skate bowl serves as the crown jewel of this teen lounge, taking up an entire room. Getting it into place was no easy feat — the designers originally envisioned the bowl as a stepped-down recess, but as it turned out, the structure couldn’t support the weight of its framework. Instead, they removed an entire floor of the home and replaced it with timber fins, flexible plywood, and polystyrene supports. 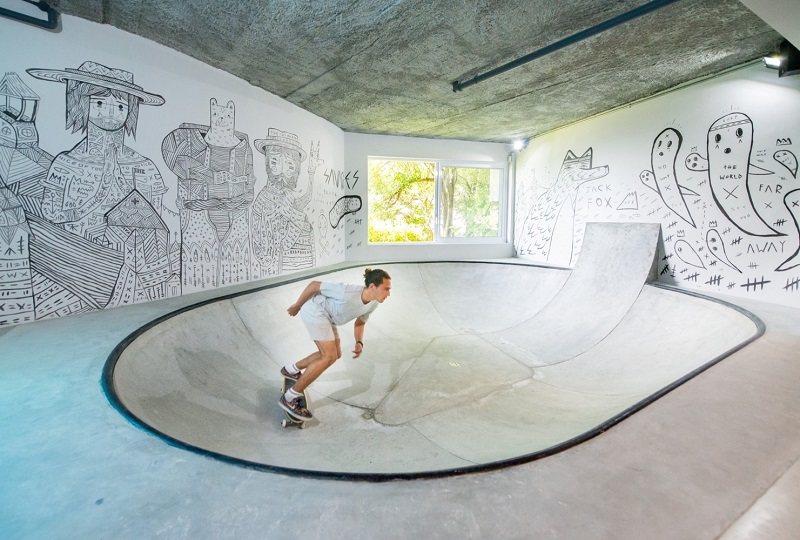 “To embellish this remarkable feature, emerging South African street artist Jack Fox applied his signature illustrations to the walls surrounding the bowl,” say the architects. “The celebrated artist worked without a set design and completed the impromptu artwork in a twelve-hour, nonstop operation.” 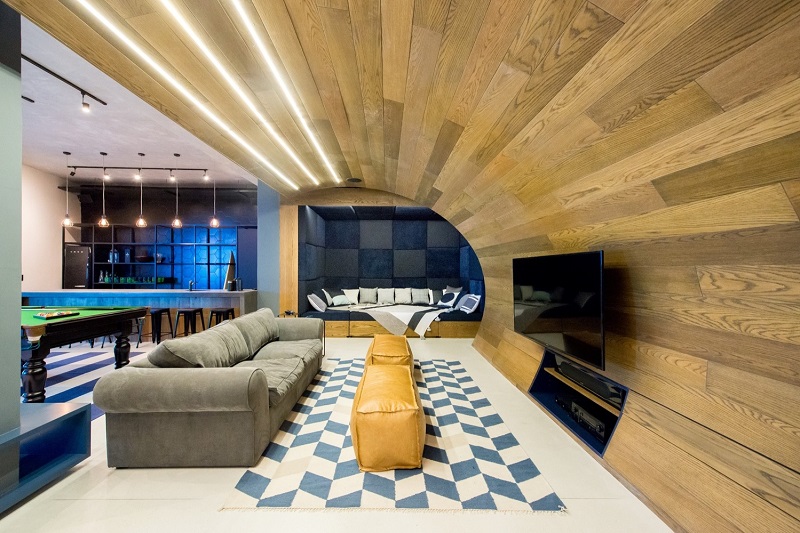 “Another striking design feature comes in the form of a grandiose, curved timber wave that cascades from the ceiling down to the floor to create an extraordinary zone for watching movies. This ‘wave’ is crafted out of steel fins that are clad in timber and lit up with three LED strips. It is kitted out with surround sound to produce a genuine movie theater experience.” 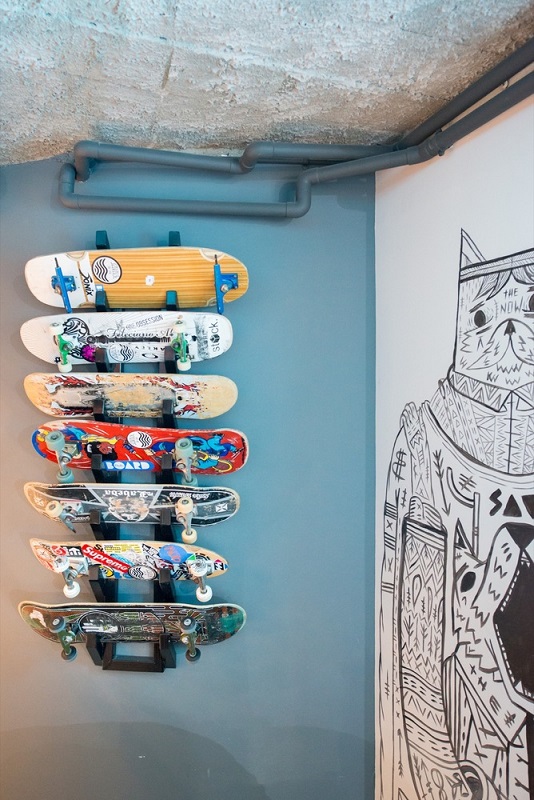 A skateboard rack beside the bowl shows off the teenage resident’s most prized possessions and allows them to double as art. The space is primarily black and white and full of stark contrasts, with a concrete ceiling setting off the rugged materiality of the skate bowl area beneath it. It’s a retreat that’s sure to make many a teen boy envious, but let’s be real: plenty of teen girls (and adults of all genders, for that matter) wouldn’t mind having a space like this to call their own.