In the French city of Lyon, one of Europe’s most extensive Renaissance neighborhoods has retained its Old World character, its cobblestone streets and weathered archways still looking much as they did when they were first built in the 15th and 16th centuries. Once home to wealthy banker-merchants, political leaders, silk weavers, and traders, the Vieux-Lyon has been an urban district for over 2,000 years, and it contains a wealth of classical, Gothic, and Romanesque architecture. 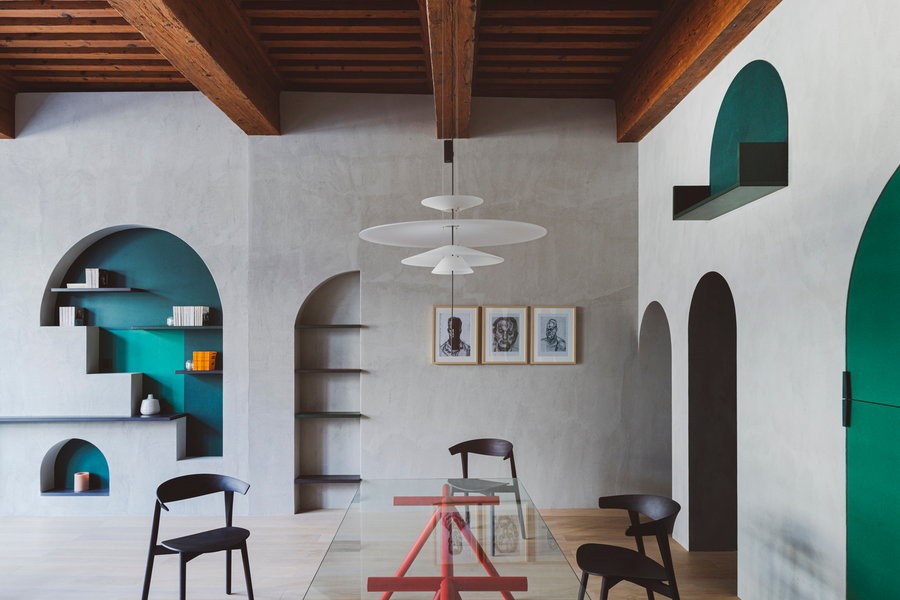 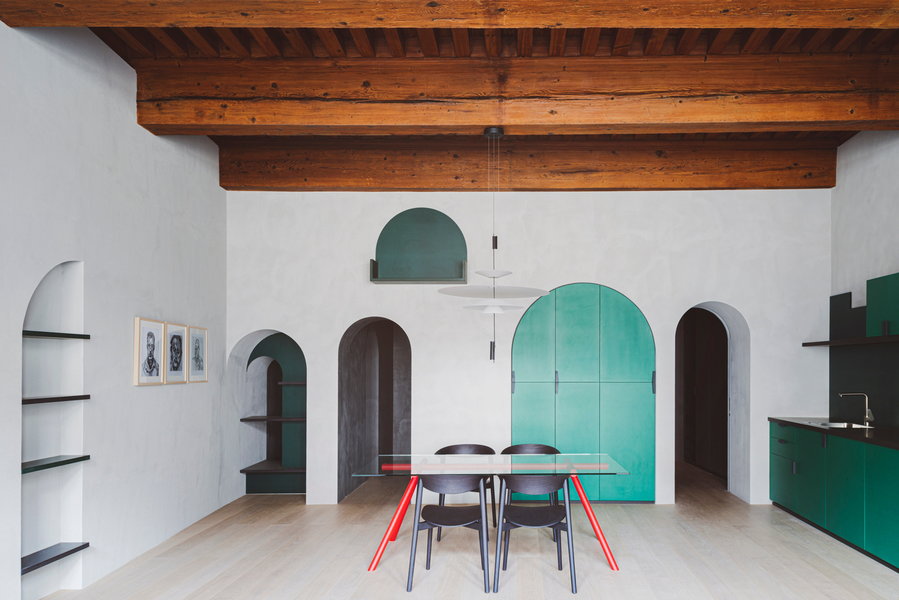 When architecture firm Studio Razavi was approached to renovate an apartment within one of those historic buildings, they wanted to craft a design that was rooted in the Vieux-Lyon’s historic past, but modernized for its current occupant. The client, a young scientist, lives mostly alone, and needed just one bedroom within the 864-square-foot space, leaving the rest of the apartment open for a generously proportioned living and dining area. 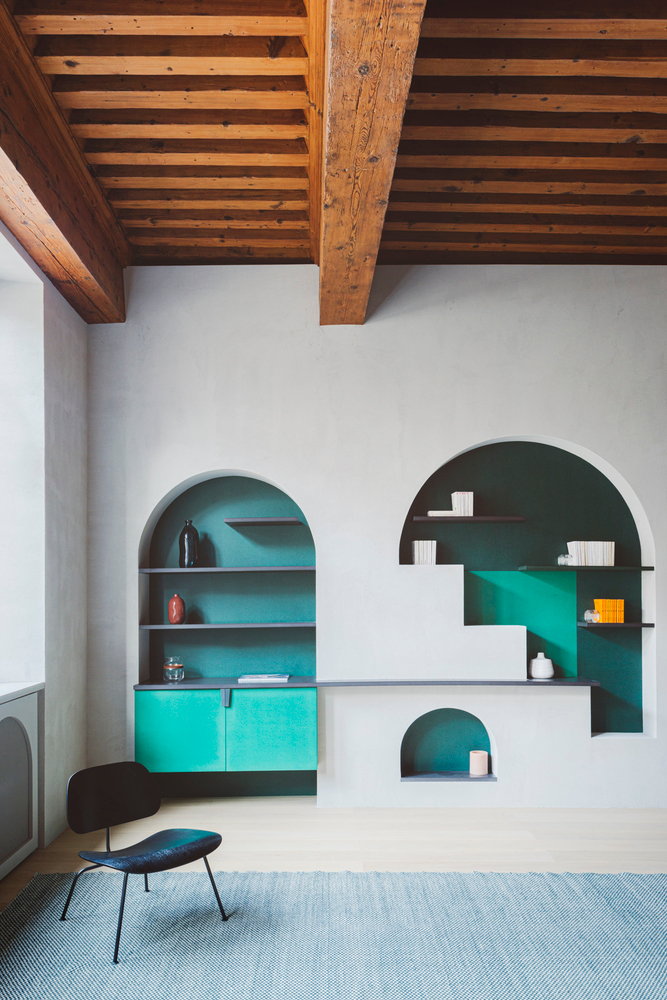 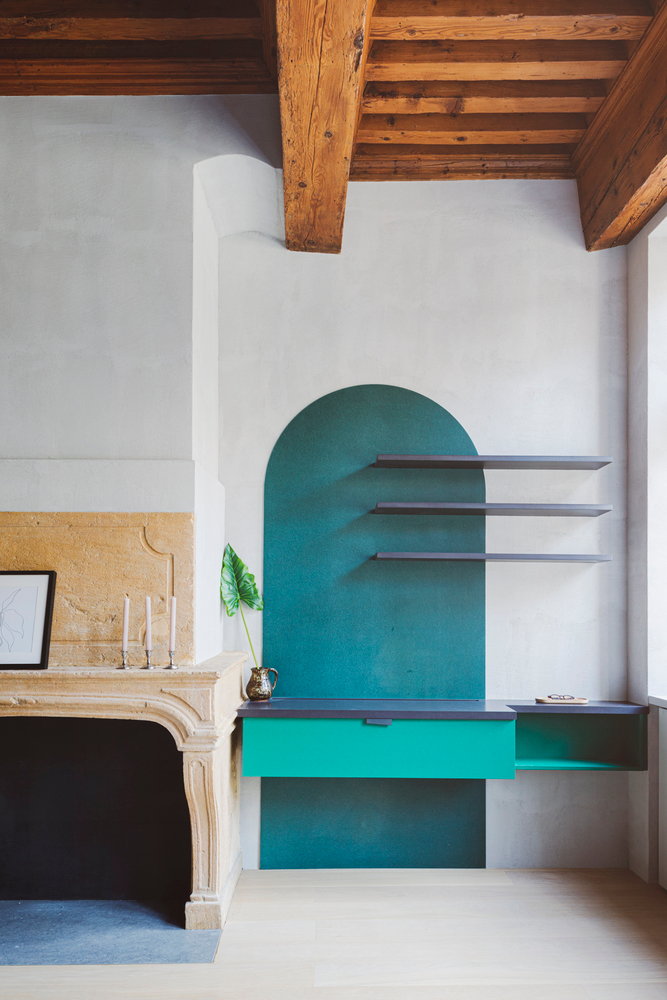 The apartment already had a lot going for it. 14-foot ceilings, oversized oak beams, and two enormous stone fireplaces were among the original features the architects wanted to preserve and celebrate for the new design, contrasting them with modern minimalist interiors and surfaces. To make the space as cohesive and simple as possible, they used nothing but concrete, wood, and rough plasterwork for all of the new walls and arches.

“Relying primarily on the use of a single material with a limited color palette, we designed a series of events so as to create what we refer to as an ‘introspective space,’ a place to allow for reflection, for creative seclusion,” the architects say.

Part of the appeal of the space is the irregularity of the apartment’s footprint, itself a testament to the age of the building. Visible in the architects’ plans, the slight slopes and angles in the walls clearly called for some creative solutions that can subtly help even out the lines and angles within the apartment to keep it from feeling disorienting. 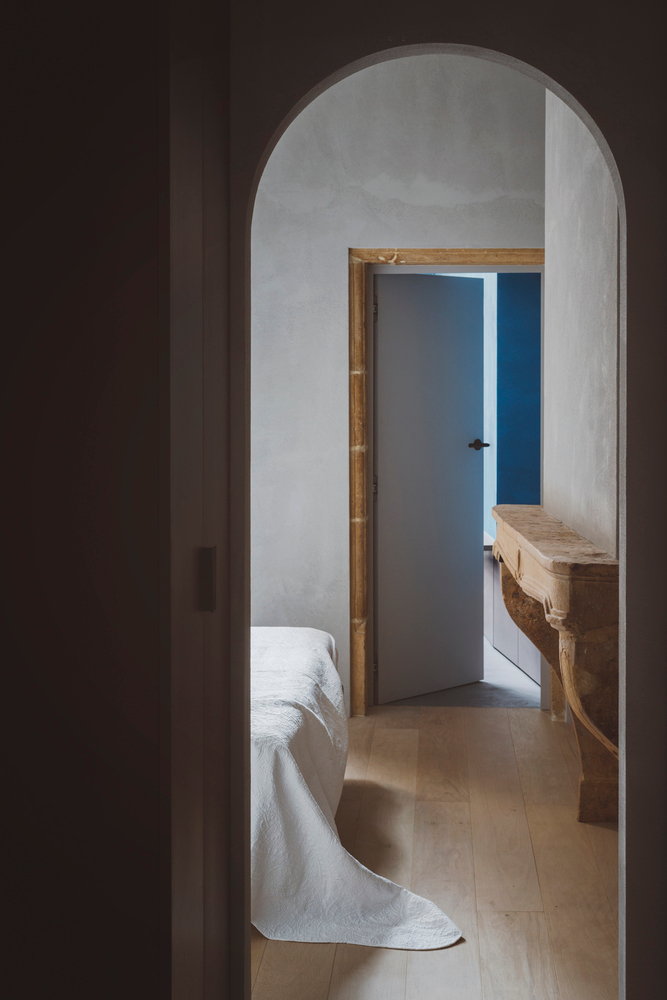 In addition to its single bedroom and bathroom, the newly renovated apartment features a living room, dining room, and kitchen. The archways used throughout the space, from doorways and windows to built-in shelves and niches, echo the Renaissance architectural features outside so the space still feels tied to its historic context. The sleek, uncluttered surfaces and lines are balanced by the weight and texture of the oak beams overhead, and the repeated use of a gorgeous gradient of jade greens gives the home a decidedly tranquil vibe.

The curated color palette is especially striking in the kitchen, where the brightest green shades anchor the cabinetry and single wall-mounted shelf directly beside one of the original fireplaces. Stepped blocks of color echo the stepped shapes built into the recessed bookcase on the opposite wall. The mottling of the plaster surfaces adds a lot of nuance, too – an effect you can mimic in your own home with zero-VOC lime paint, even on ordinary drywall. 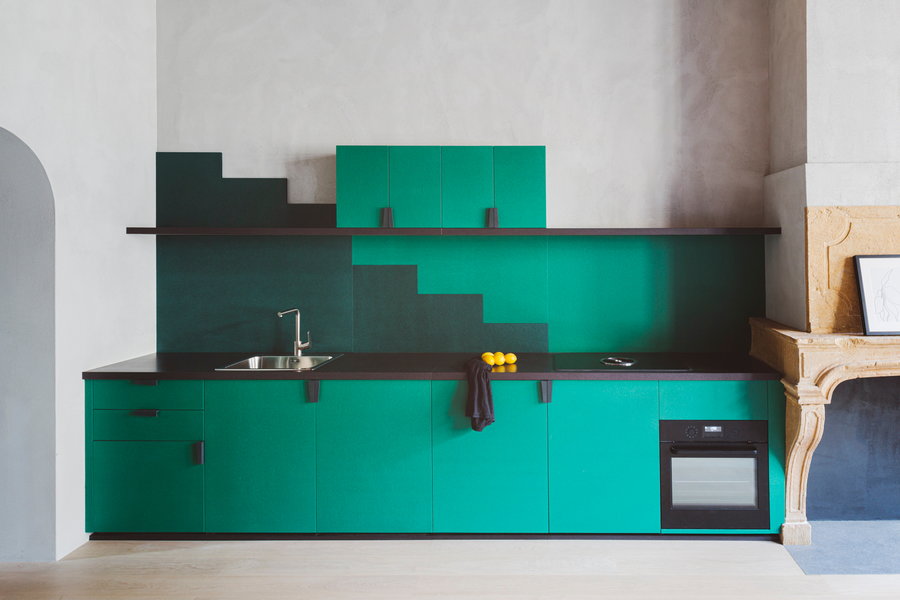 The result of this refreshing renovation is a space that feels unified and creative, never lacking anything interesting to look at, and it certainly doesn’t hurt that it’s decorated with restraint and a keen eye for detail. Clearly, mostly-monochromatic interior designs don’t have to be boring.