The first woman (and first French architect) to be named as a laureate of the European Prize for Architecture, Manuelle Gautrand is celebrated for her “boldness and non-conformity.” Throughout her career, she has produced creative spaces that feel both adventurous and comfortable, rooted in their local context while taking unexpected forms. Her works are typically grand and large scale, including museums, cultural centers, commercial complexes, and theaters. So it’s interesting to see how her style translates to a small space like this 17th-century apartment she renovated in the Marais neighborhood of Paris. 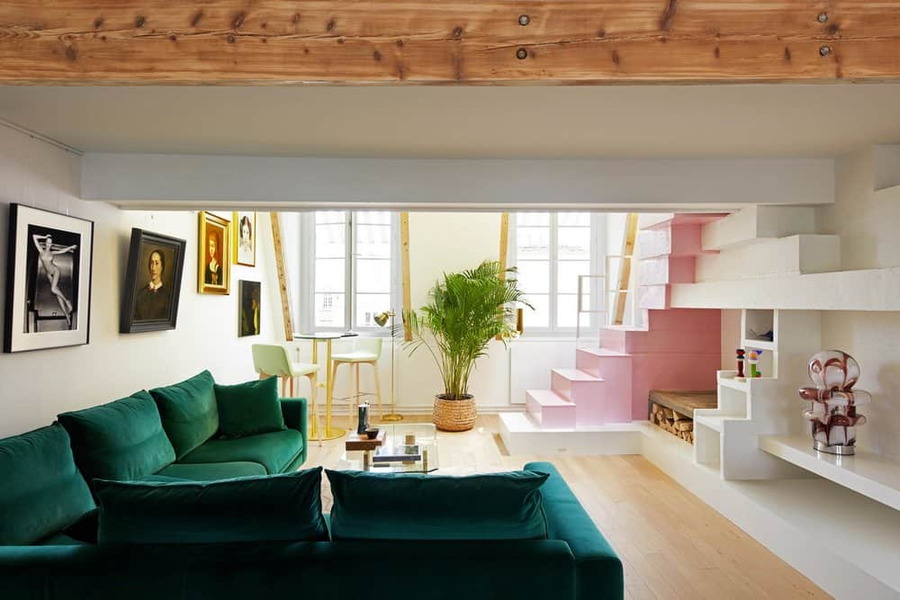 The 1300-square-foot apartment is Gautrand’s first private interior design project. Like many Parisian apartments of a similar age, the space started out rather dark, with a lot of small, enclosed rooms. The clients wanted Gautrand to open it up, infuse it with daylight, and make it feel more modern and playful. 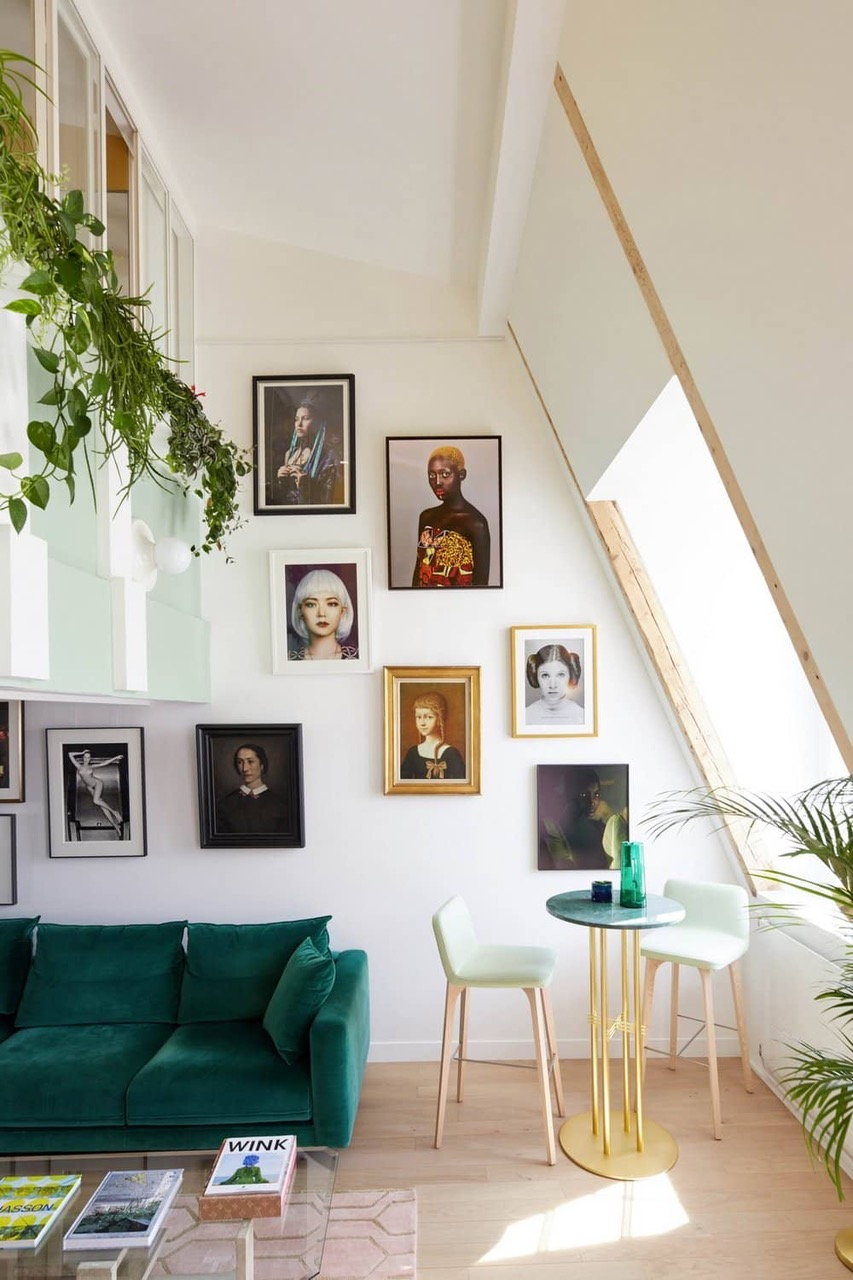 “We wanted to break from the ideas and images of Bourgeois Parisian apartments and lean more towards something that is more in the order of a holiday house, like a ‘cabane de plage,’ those small but colorful shelters from which one steps out to the sun and sky,” says the owner. “We wanted to create something that leaned more towards an artistic statement, and not just a historical one. We wanted to use color and we wanted to sculpt the volumes.” 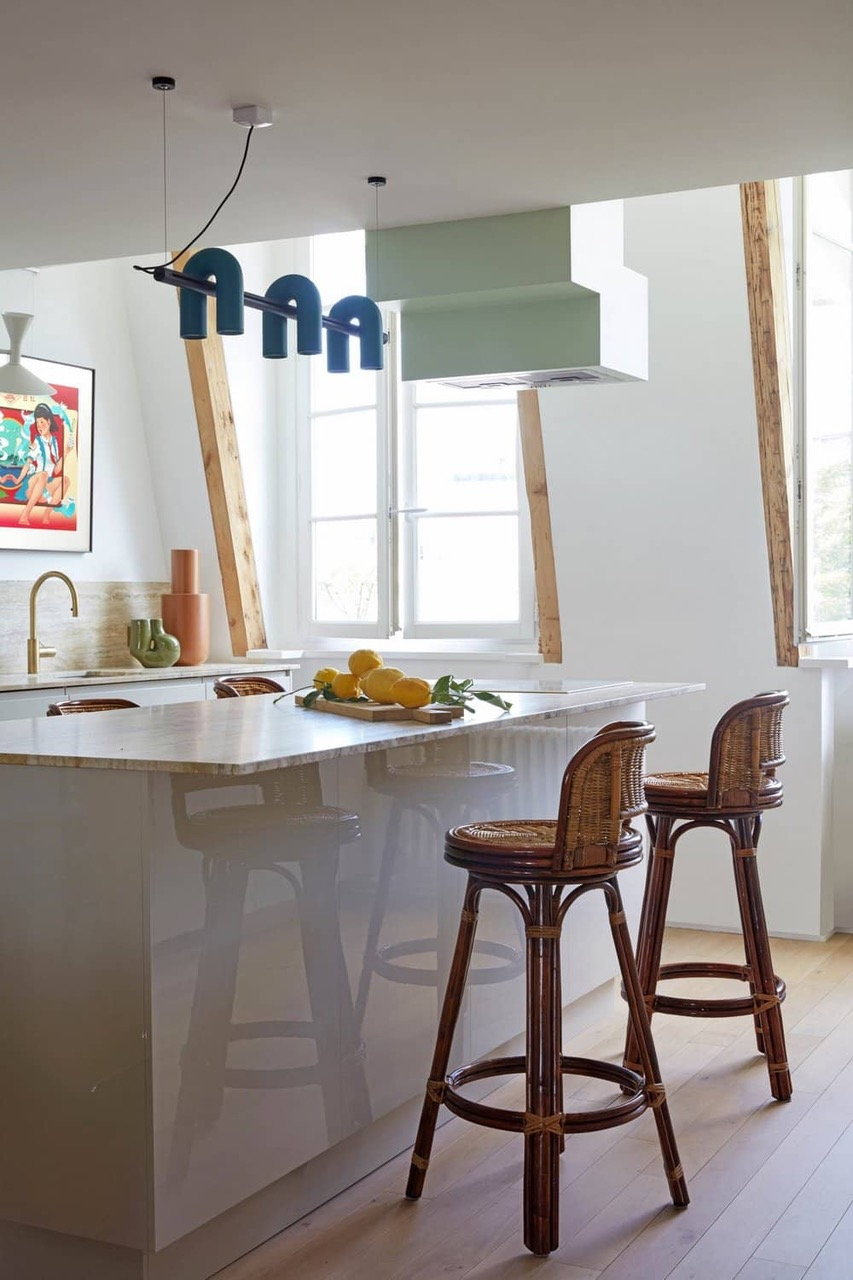 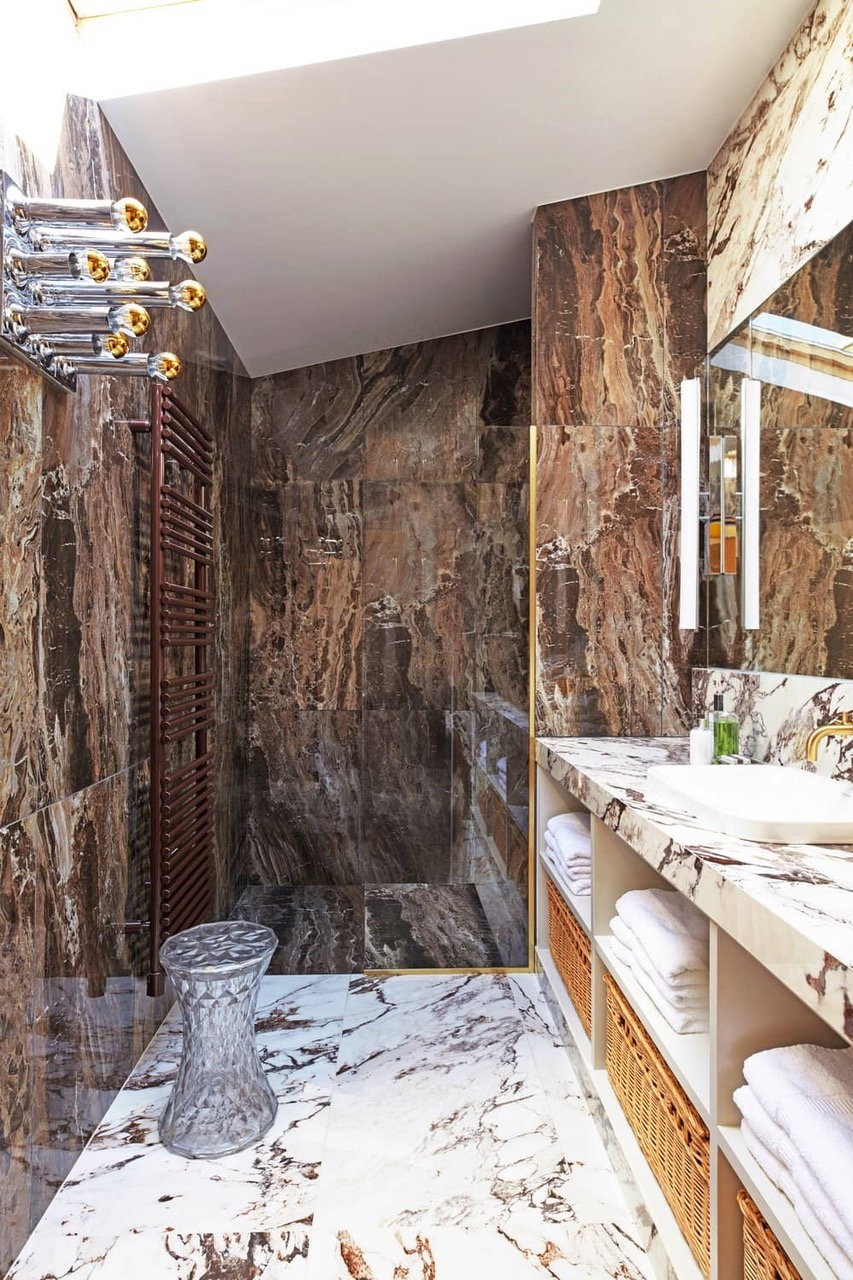 “Sculpt” became the key word for the renovation. Gautrand approached the project almost like an assemblage, slicing out some areas and bringing in new shapes and modes of circulation. Walls were removed and new voids created to take full advantage of the large windows on the eastern and western facades, allowing the light to travel to two levels of living spaces. These spaces were then divided into zones, each with their own particular style and mood. 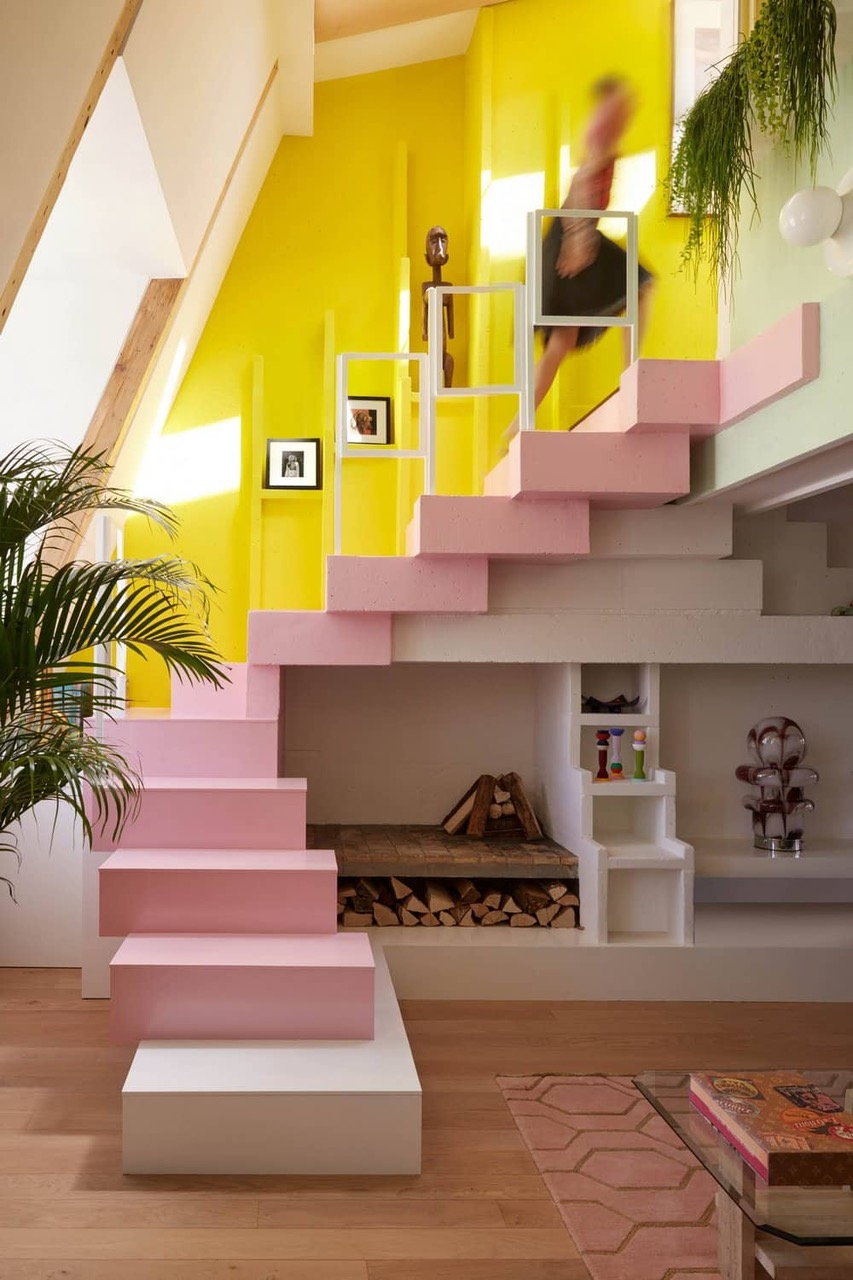 At the center of the home stands its most memorable feature: a blocky new staircase in a soft shade of pink that makes the yellow wall behind it look even sunnier. Slightly offset from each other, the steps almost start to cantilever out to the left as they reach the landing and turn upward, arching over niches for a fireplace and shelving. 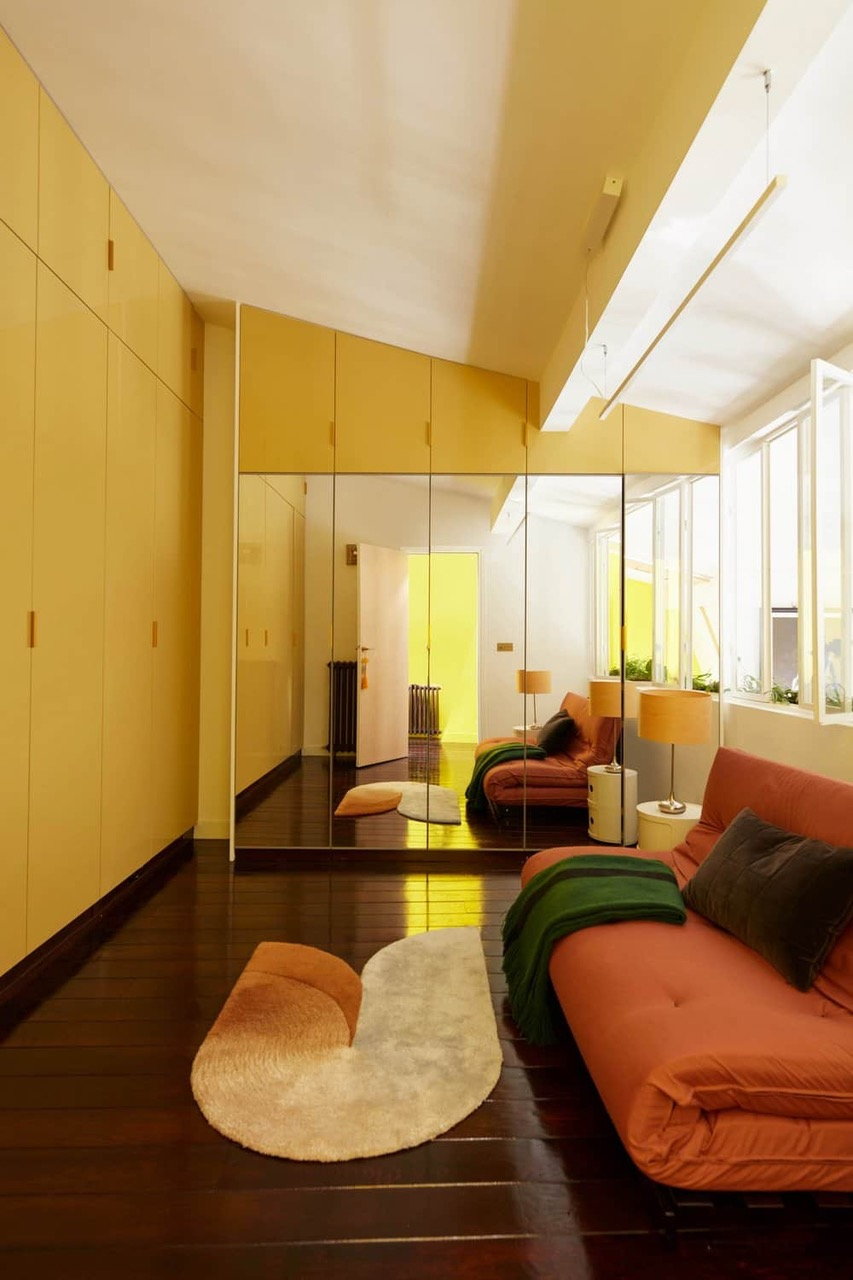 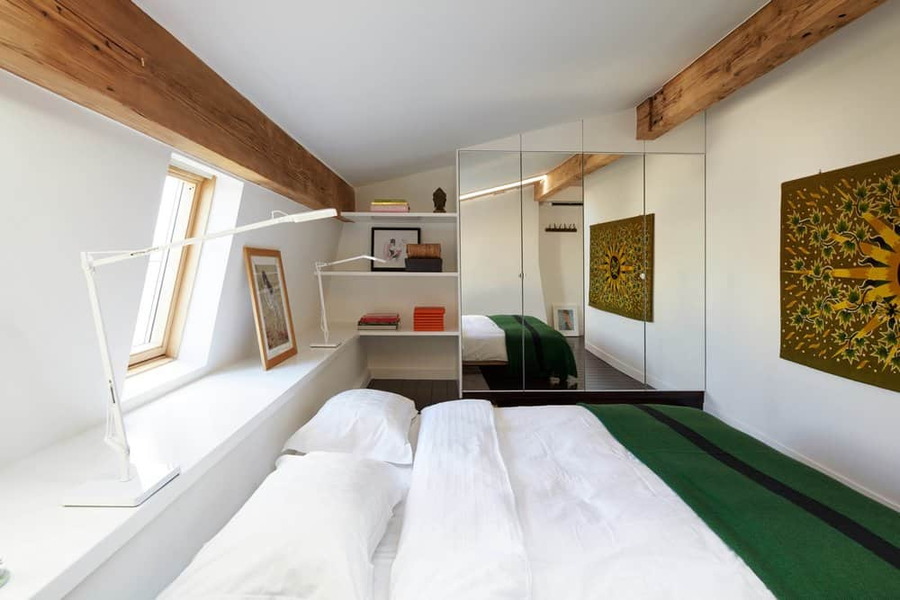 The stairs lead from an intimate, understated living room tucked beneath the loft up to a vivid yellow mezzanine with an angled ceiling, just beneath the roofline of the historic building. This level contains the primary bedroom, a guest bedroom full of built-in storage, a strikingly textural marble-lined bathroom, and a hallway topped with a long, narrow skylight. Best of all, the bedroom opens onto the full-height living room atrium via atelier-style windows. 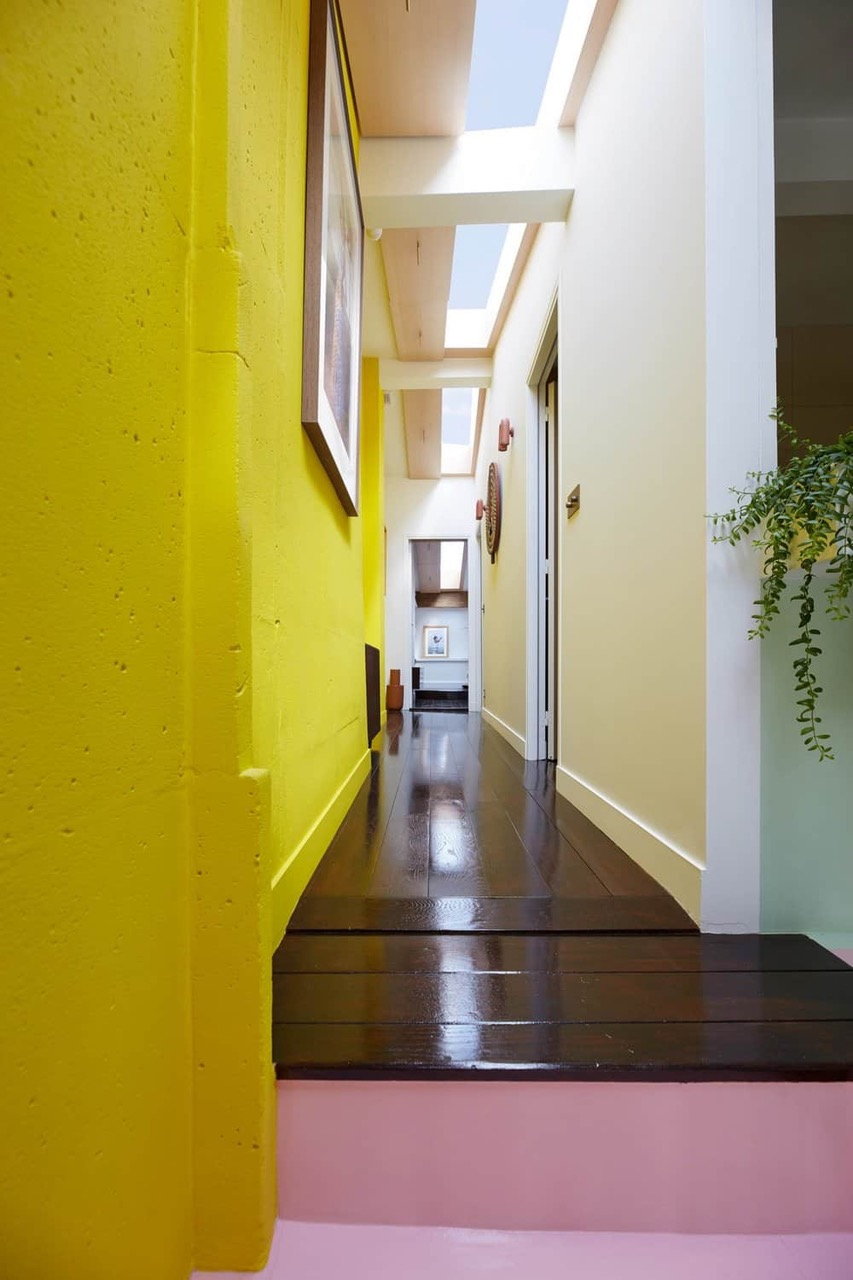 “The goal was to create a strip of natural light, through which the sun’s influence, whether it be cold white winter light or warm summer, could cast its shadow and influence the interior, upstairs and down, throughout the day,” says Gautrand. “A traditional staircase would have interfered with the continuity of this strip of sky and so I began playing with the relief that these 20-centimeter thick pieces of cellular concrete would make, and the stairs came out of this. Then I decided to make it even bigger, so that it extended up the wall of the mezzanine and onto the wall under the skylight.”