If you aren’t already obsessed with RuPaul’s Drag Race, Pride Month is a great time to binge-watch one of the most fun reality TV shows of all time. With 13 regular seasons, 5 All Stars seasons, and an ever-growing array of international spin-offs under its belt, Drag Race is a phenomenon that has introduced hundreds of memorable drag queens to the world. They’re all iconic in their own ways, but some queens have the kind of charisma, uniqueness, nerve, and talent that makes their style instantly recognizable.

Now, the friendly folks at Household Quotes UK have interpreted the personal style of seven of those fabulous drag queens in a whole new way: through interior design. These fantasy drag queen bedrooms capture the essence of each performer’s special personality. 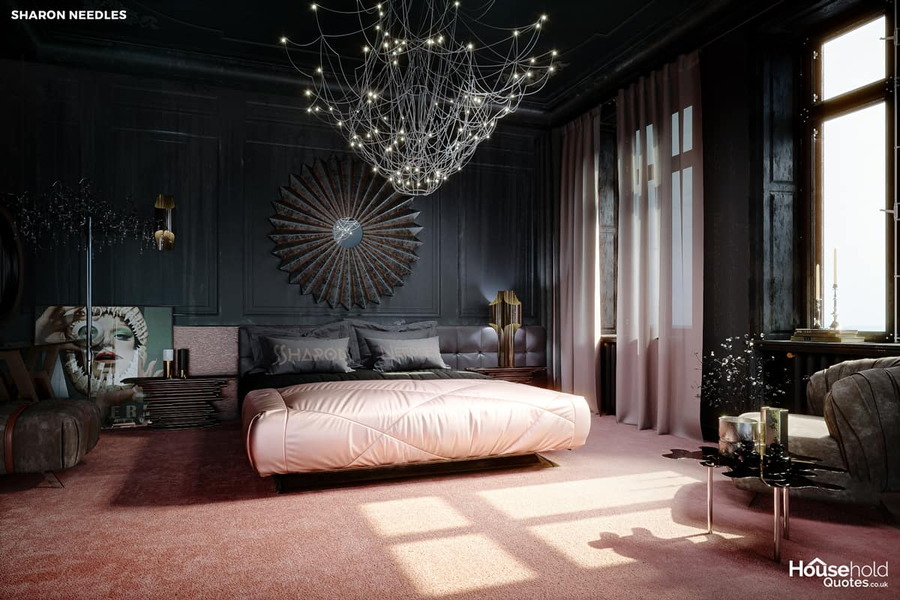 From the moment she walked into the Season 4 Werk Room with white contacts and a witch hat, it was clear that Sharon Needles was one of a kind. As the Household Quotes designers mention, Sharon truly “single-handedly redefined what it meant to be a drag queen” with her edgy interpretations of each challenge on the show. She brought a gritty punk authenticity to her season, but also high gothic glamor.

For Sharon’s bedroom, the designers chose a black and pink palette contrasting dark and light. An elegant contemporary chandelier, a baby pink satin bedspread, black painted wood walls, and furniture fit for a queen are accented by a little bit of cheeky ego in the form of a self-portrait from the cover of her album Taxidermy and her name emblazoned across the pillowcases.

Trixie Mattel (Season 7 and All Stars 3) 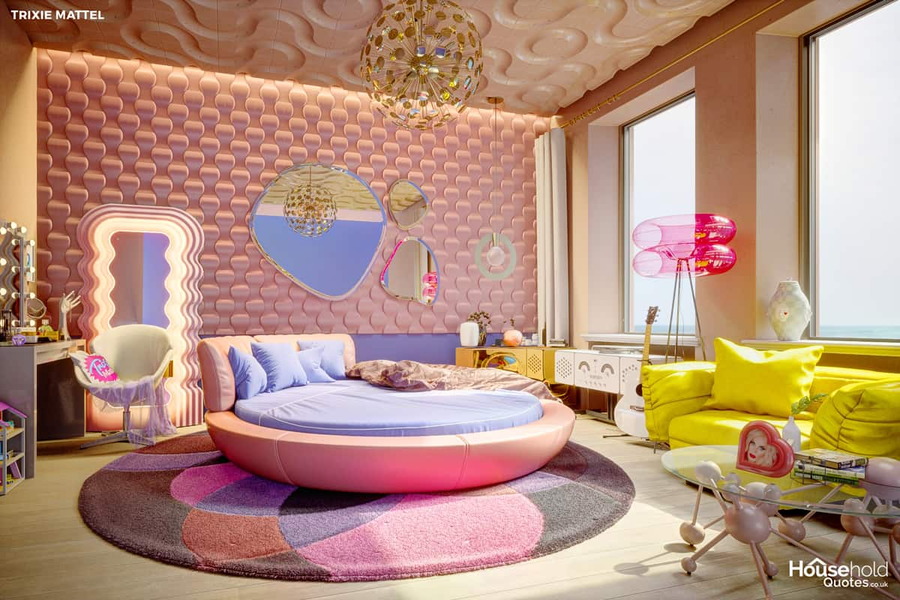 Trixie might look like a Barbie girl, but this queen’s got layers. Best known for the sharp lines of her dramatic doll-like makeup and her career as drag’s most successful folk music artist, Trixie embodies ultra feminine hippie-chic style. Fittingly enough, her fantasy bedroom looks like a combination of Barbie’s Dream House, 1960s retro-futurism, and Dolly Parton’s dressing room. “With wide-open spaces, we think there’s plenty of space for Trixie to compile yet another landmark folk hit,” the designers say. “You’ll also notice we’ve incorporated both her famous white guitar and autoharp.”

The best part? A photo of Trixie’s drag queen bestie Katya in a heart-shaped frame. 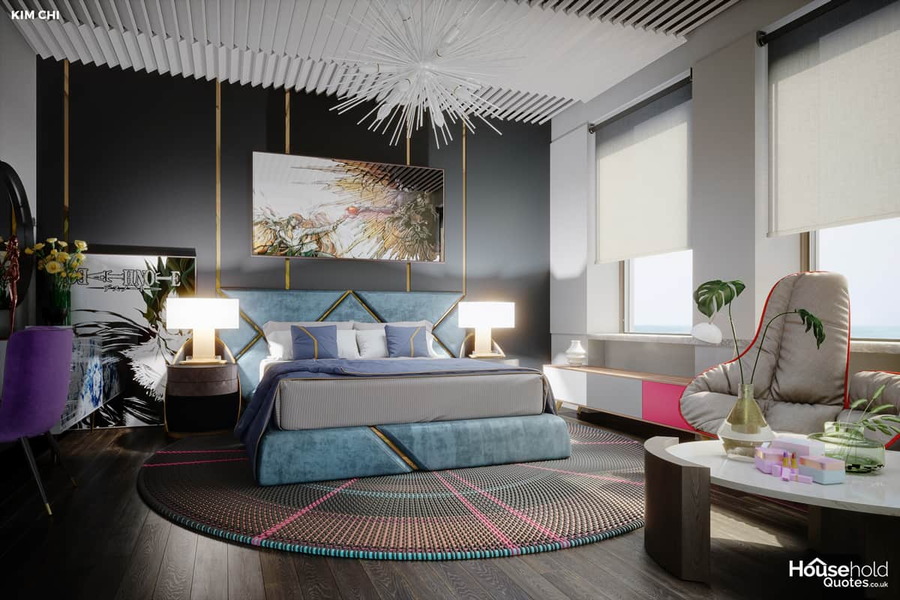 A work of anime art brought to life, Kim Chi might have two left feet, but she can also turn a fierce look, and her makeup skills are second to none. On season 8 of RuPaul’s Drag Race, the Korean-American queen stole the hearts of fans with her impeccable ensembles and awkwardly sweet personality. Her fantasy bedroom decor captures her love of anime with a poster from the Death Note series, layered with pops of bright colors, unexpected shapes, vivid patterns, and a backdrop of quiet seriousness. 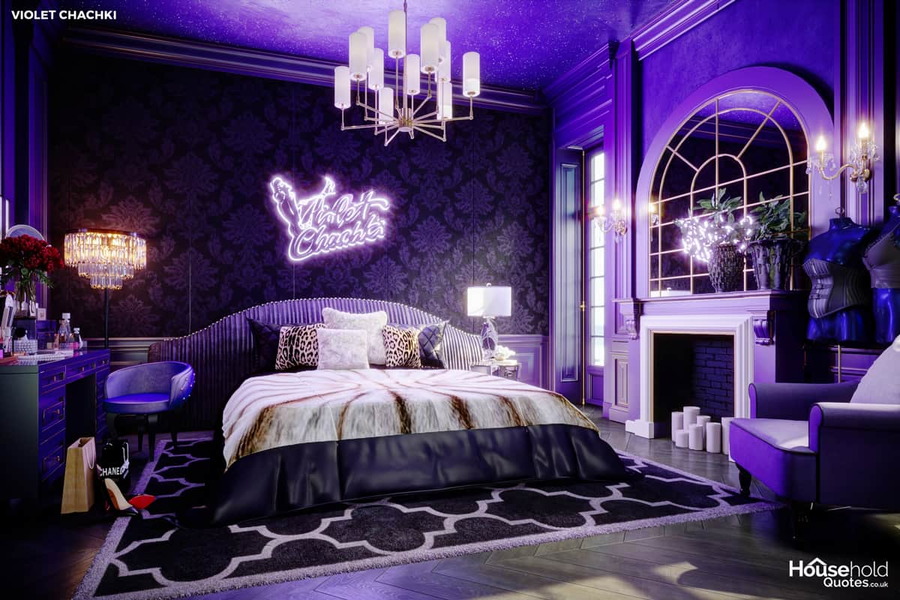 When Violet Chachki walks into a room, you can practically hear a va-va-voom burlesque soundtrack accompanying her. Appropriately enough, her bedroom is sultry, moody, and aloof, with nearly every surface from floor to ceiling rendered in striking violet hues. It’s a little dark and mysterious but also high fashion – check those Louboutin heels and Chanel shopping bags in the corner. “We’ve paid homage to the Corset Queen’s distinctive fashion sense with a mannequin opposite her Hollywood glam dressing table,” say the designers. “We see Violet’s bedroom as a mixture of a Disney vampire castle and the elegance of an aristocrat’s country home.” 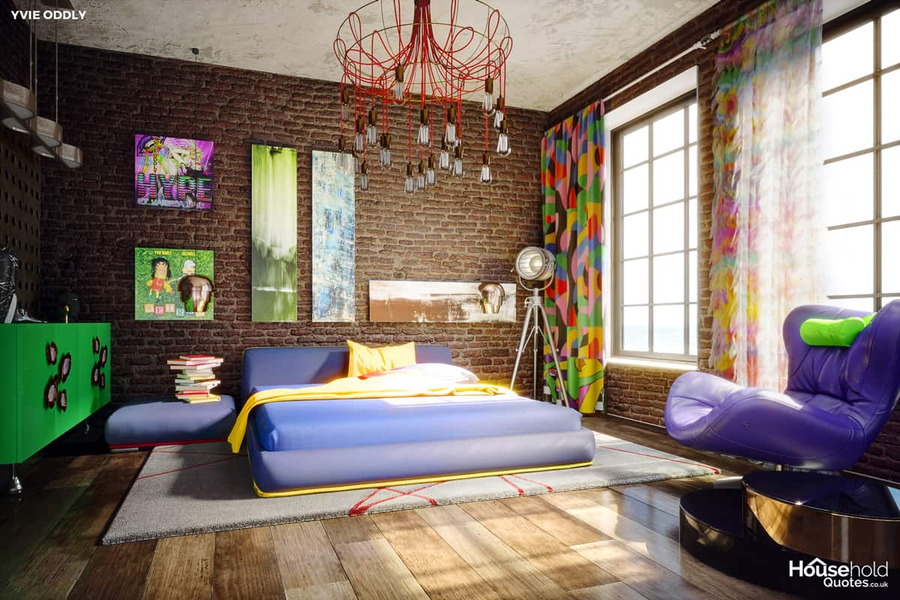 Raw, kooky, and rough around the edges, Yvie Oddly lives up to her name. Her drag is always resourceful, colorful, wacky, and unexpected, bringing a bit of Burning Man-style wildness to the franchise. Reminiscent of an artist’s New York City warehouse studio in the late 70s, her bedroom features rustic surfaces like wide plank wood and exposed brick accented by eclectic patterns. The Household Quotes team adds that they’ve “paid homage to the focal point in the room with an authentic Hollywood movie lighting camera in the corner. Just in case you forget who’s the star of the show!” 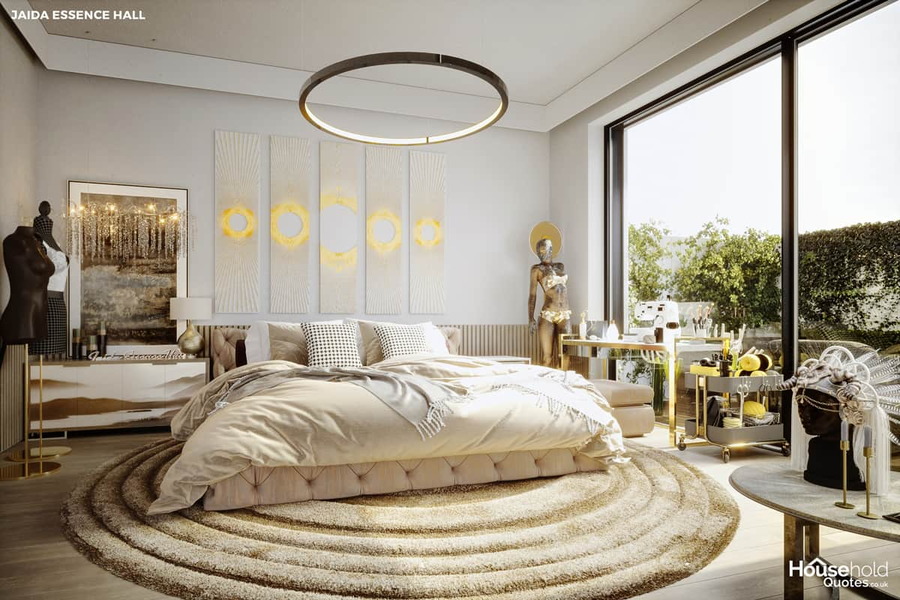 One of Jaida’s most impressive qualities is how impeccably put-together she is at all times. There could be a tornado raging around her and somehow she’d still look perfect, without a hair out of place. She might just be one of the most poised and refined queens to ever appear on the show. The Household Quotes designers call her “the ultimate billionaire’s trophy wife,” a fitting compliment for this gorgeous and highly talented performer. Jaida’s bedroom is just as sophisticated and expensive as she is, full of gold and neutral accents. 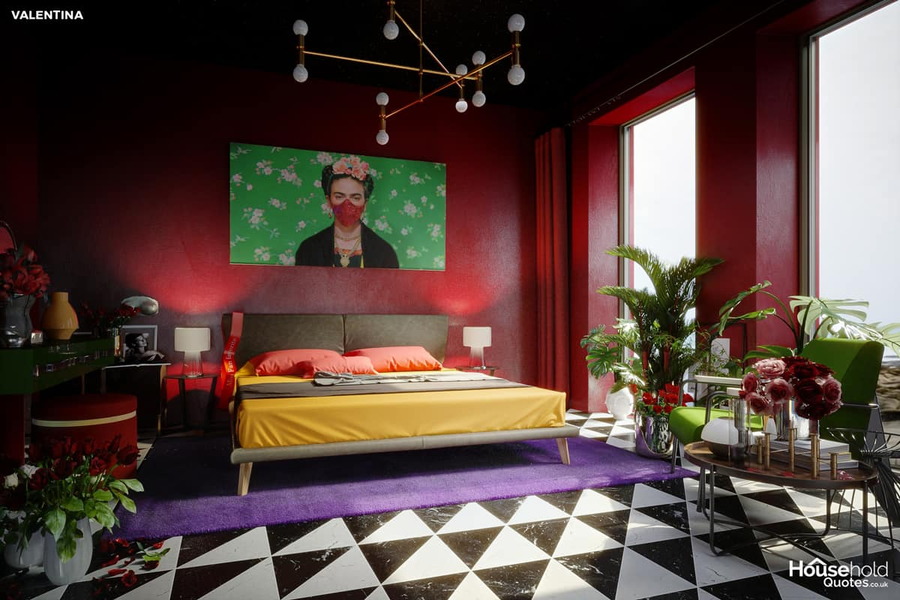 Few queens are quite as beloved by Drag Race fans as Valentina, an absolutely stunning Latina whose persona is somewhere between a Selena-style Spanish-language songstress and the star of a telenovela. Her charm, wit, and effortless grace are unparalleled. Valentina’s dream bedroom captures her fiery personality, with rich reds, an abundance of roses presumably gifted to her by legions of adoring fans, and a giant poster of Frida Kahlo wearing a red mask – itself a reference to one of the most famous moments in Drag Race herstory. “I’d like to keep it on, please!”

Household Quotes notes that “while designing the fan favorite’s bedroom, we spent a lot of time playing with the lighting to spotlight the heart of this room. Valentina bewitched millions across the world, and we decided to highlight that through a dark-to-light gradient from corner to center.”