All cities can get dreary in the wintertime — even New York. But there’s a bright new spot (literally) in NYC’s historic Garment District thanks to a traveling installation that aims to get urbanites active and playful all the time, no matter how cold and gray the weather might be. Located on Broadway between 37th and 38th streets, where an entire block has been closed to vehicular traffic, “Impulse” is a collection of 12 illuminated see-saws temporarily installed as part of a year-round public art program. 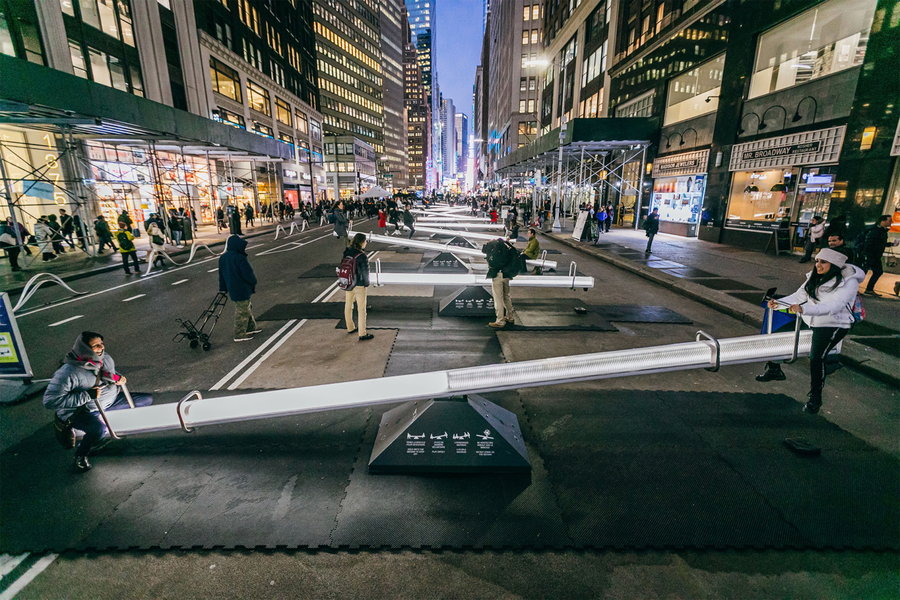 The interactive installation was first created by Lateral Office and CS Design in collaboration with EGP Group for the sixth edition of Luminothérapie (“Light Therapy”) in 2015 at the Place des Festivals in Montreal’s Quartier des Spectacles. Since then, it has traveled to Chicago, Boston, Scottsdale, and other cities around North America, bringing a whole lot of fun along with it.

There’s more to “Impulse” than a dozen glowing see-saws, which range from 16 to 24 feet long. Up to four users can climb on at a time, swinging up and down to activate sequences of light and sound. The installation’s initial aim was to draw more people to Montreal’s main arts district during a time of year when it tended to be underutilized. 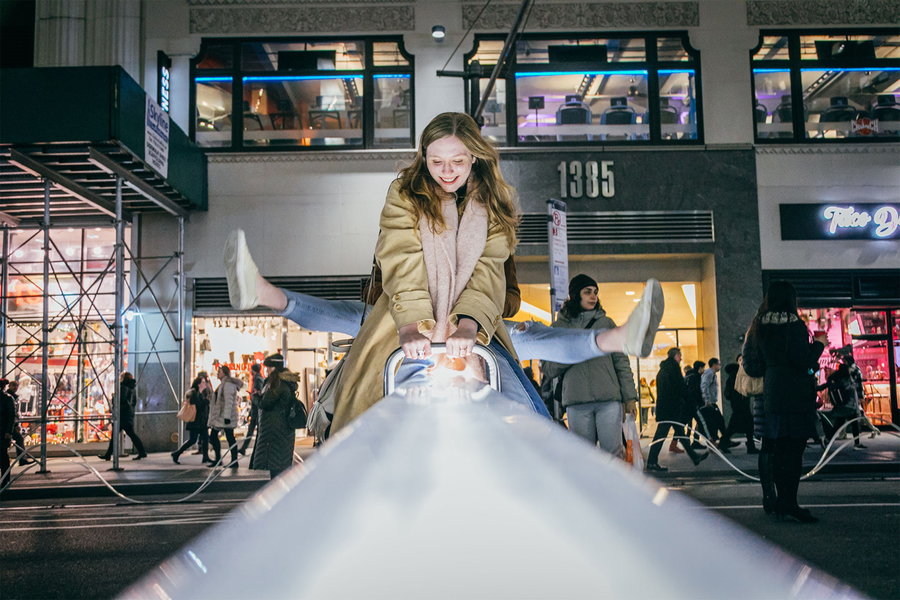 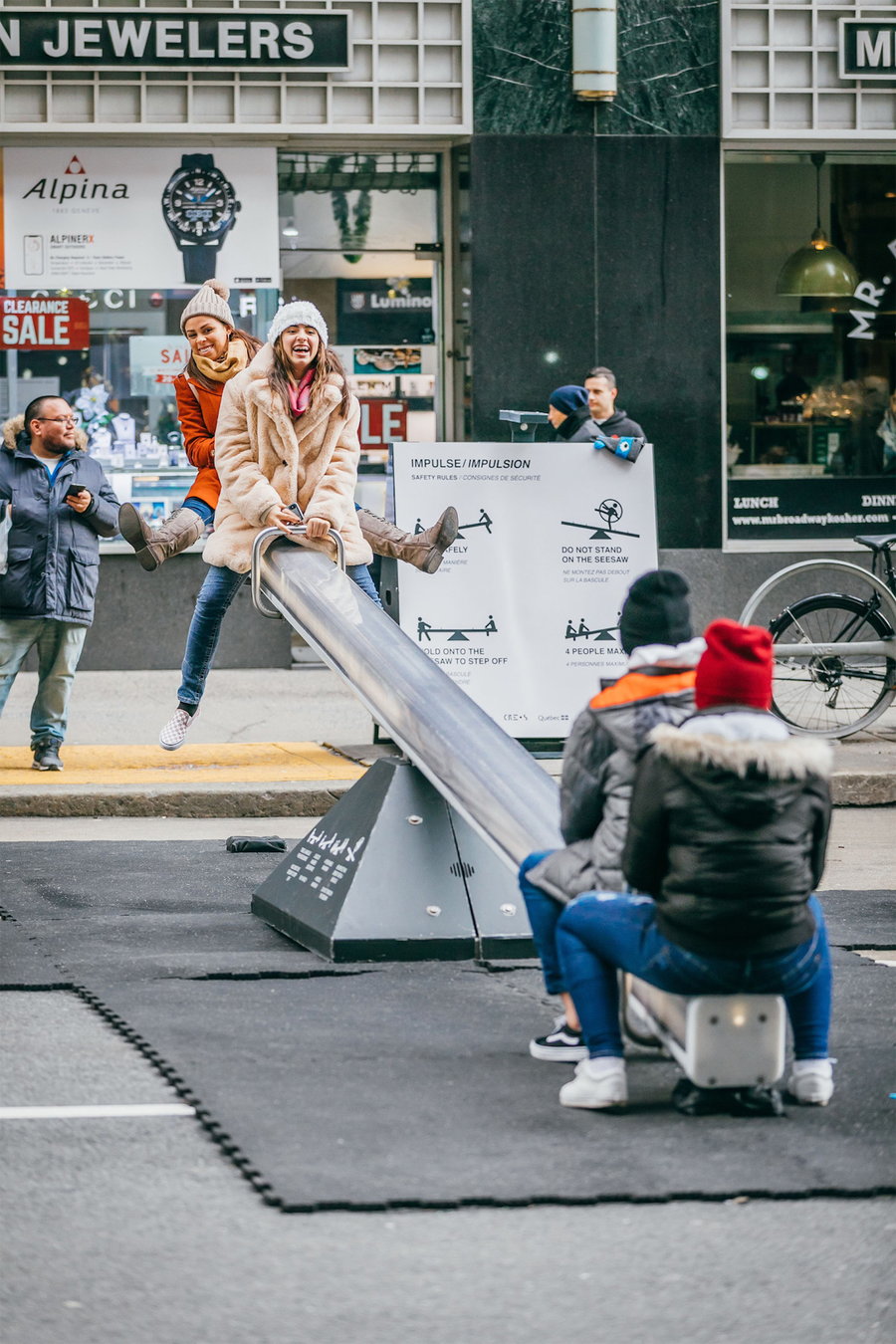 The designers took inspiration from a pretty unexpected source, too, explaining: “Inspired by the iconic cover of the Joy Division album Unknown Pleasures, as well as Steve Reich’s serial, minimal music, which plays with repetition, rhythm, and syncopation, [the] ‘Impulse’ project explores how architecture can visualize sound.”

Envisioned as a “dynamic, interactive landscape,” the installation responds to the movements of its users, making the public an active participant in how it looks and works. LED lights and a “pool” of sounds are stored within a micro-controller in the base of each see-saw, which in turn is activated by the speed, rhythm, and intensity of its motion. 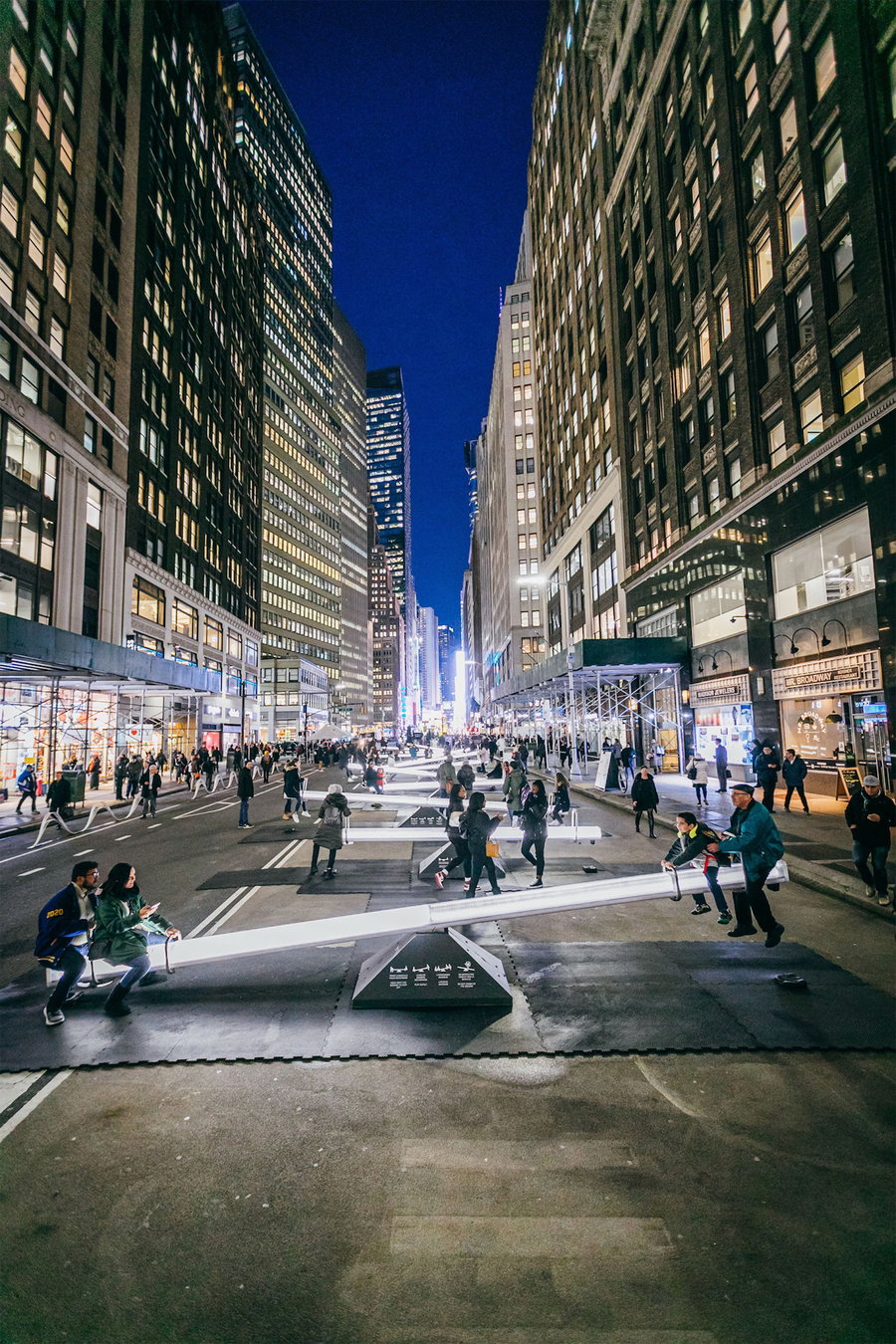 The designers add: “The Place des Festival in the Quartier des Spectacle is transformed into a space of urban play through a series of 30 interactive acoustic illuminated see-saws that respond and transform when in motion. The seesaws, of two lengths, form units of light and sound that can be activated and played by the public to create a temporal, ever-changing event. ‘Impulse’ embodies ideas of serialism, repetition, and variation to produce zones of intensity and calm within a large public space.”

“When not in use, the see-saws stabilize to the horizontal and remain at a lower glowing level. When activated by users and inclined, the see-saws, wired to LED lights and a speaker, will augment in light intensification and emit a sound sequence. The 30 see-saws shift along the length of the Place des Festival in plan, while their vertical motion creates a dynamic light and sound wave. ‘Impulse’ is an ever-changing urban instrument.” 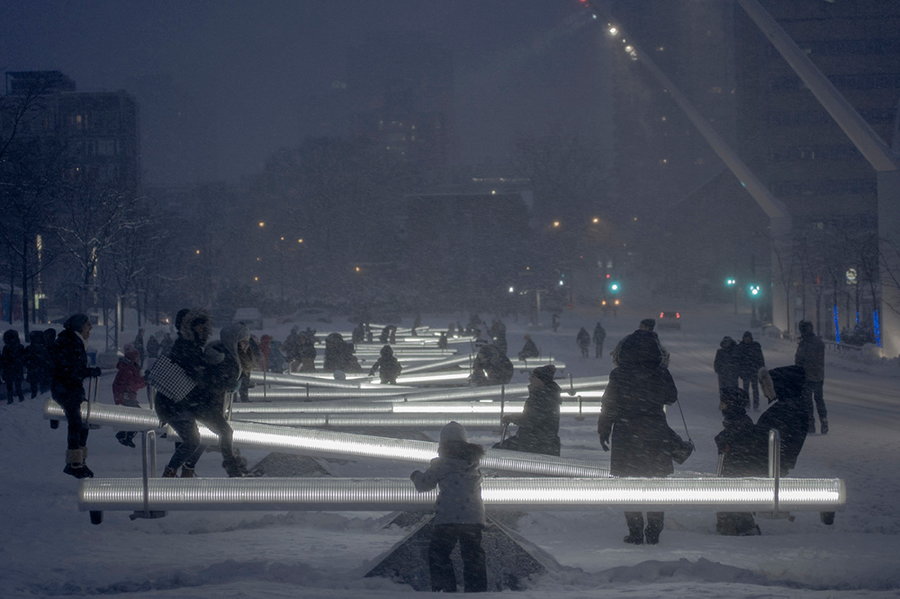 All that basically creates a constantly changing light and audio show that active users and passersby alike can enjoy. It’s certainly livening up the Garment District, where it will remain in place through the end of January. It’s also fun to see its previous incarnations, like the snowy scenes in Montreal. Check out more photos at the Lateral Office website, or on Instagram.