What to do when you drive yourself crazy trying to put together that brand new furniture from IKEA? Post on social media, of course. In fact, Twitter can often be used as an informal measure of the what, where, and how of consumer emotions. With that in mind, Household Quotes analyzed nearly 50,000 tweets pertaining to IKEA. The results show exactly who’s the most frustrated, where they live, and what products drove them to share about it. 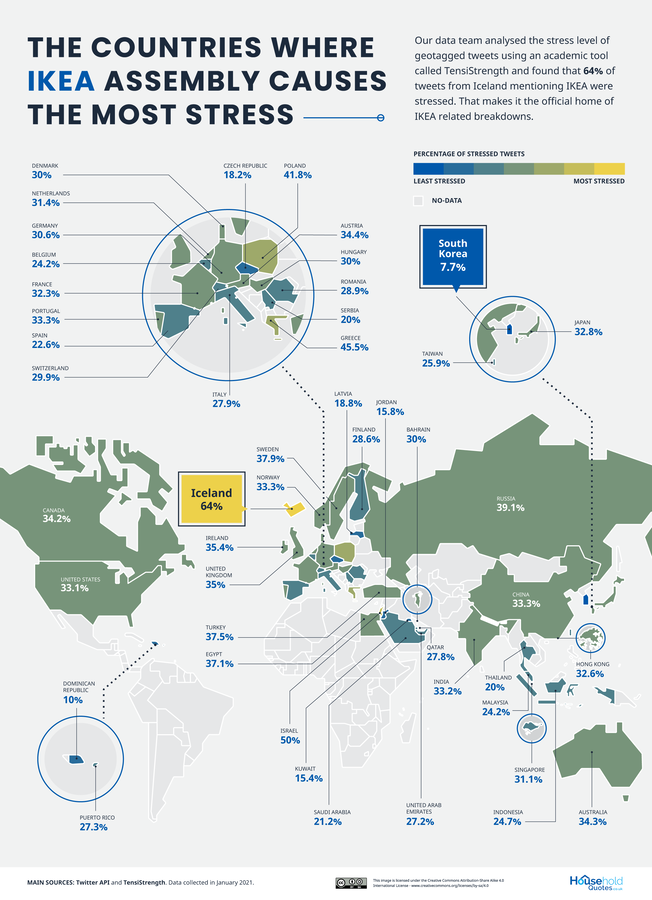 The research team used the academic TensiStrength tool to decide whether tweets were stressful or not. They then ascertained locations and broke them up by gender, as well as isolating comments about specific pieces of IKEA furniture.

What they found is that the company’s packaging, products, and directions seemed to cause more stress in Iceland than any other country. 64 percent of IKEA-mentioned tweets there came from a stressful place. Moscow, Russia, and Quebec, Canada weren’t too far behind, with 60 percent of their respective IKEA tweets expressing frustration. Household Quotes put together a visual map that calls out the stress level of dozens of countries. Of course, their data could be a result of higher Twitter use in certain areas, or maybe it just displays a cultural phenomenon. Either way, most countries reported at least a 30-percent rate of frustration. Tiny Israel measured large on the stress scale at 50 percent. Greece reported at a rate of 45.5 percent, and Poland, 41.8 percent. On the other end of the spectrum, South Korea has either mastered the art of flat-pack construction or Zen meditation, since they only reported a 7.7-percent frustration level. 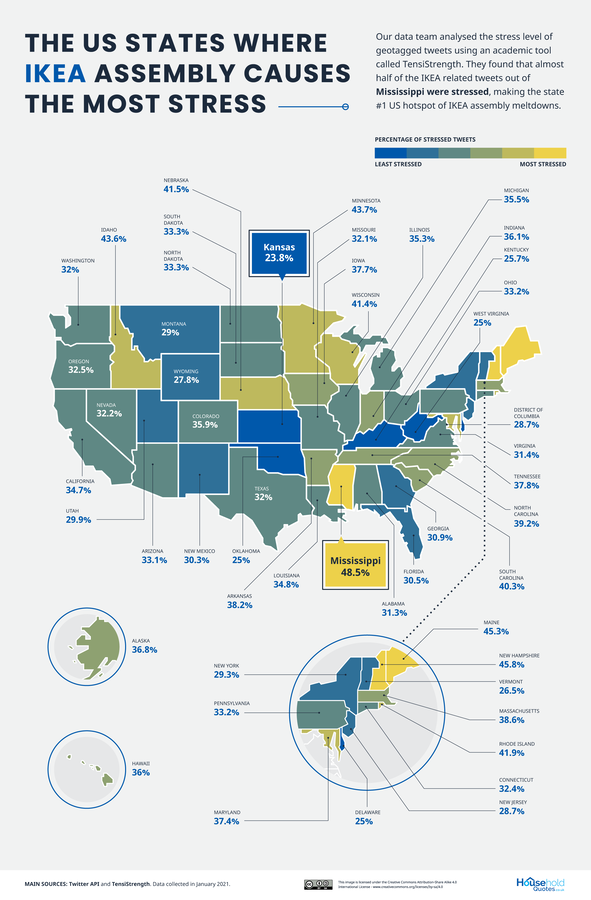 If you’re interested specifically in the United States, as a whole the country came in at 33.1 percent. Broken down further, the majority of states fell into the 30 to 40-percent range. Mississippi showed the least amount of patience, reporting 48.3-percent stress. Minnesota, Idaho, Nebraska, Wisconsin, South Carolina, Maine, New Hampshire, and Rhode Island also came in at over 40 percent. Apparently the lowest risk of IKEA-induced divorce is in Kansas, where most Tweeters simply swell with pride in their accomplishment, and only 23.8 percent express frustration.

When it comes to particular pieces of furniture, IKEA couches take home the ribbon for most frustrating, with 50.6 percent tweeting specifically about their assembly. Other furniture was nearly as blood-pressure inducing. Cabinets came in at 50 percent, nightstands at 48.5, dressers at 48.3, and cribs at 48.1. Headboards, benches, bookcases, chairs, beds, tables, shelving units, and drawers were also all over 40 percent. Desks, wardrobes, armchairs, and cabinets seem to push less stress buttons for people, but still rank between 30 and 40 percent.

Breaking down the data further showed that certain names seem to be associated with either feeling furniture-assembly stress or reporting about it. For instance, women named Rose, Ruth, Marie, Kathryn, Michelle, Stephanie, Linda, and Martha, in order of occurrence, all reported at 50-percent frustration or higher. Men named Jose held a dominant lead at 64.3 percent, so you may want to partner up with someone else for if you have a soft spot for the Scandinavian retailer. Johnny, Russel, Terry, and Noah also reported over 50-percent irritation.

While IKEA furniture is the ubiquitous solution for quick and inexpensive decor changes, overcoming the assembly process might be more frustrating than you think. Come prepared with plenty of time, a partner other than Rose or Jose, and perhaps a glass of wine to smooth the process over.