Singapore is a tiny, densely populated island city-state that’s almost entirely urbanized, but it’s also the greenest city in Asia, and its vegetation covers more and more ground with each passing year. You probably wouldn’t expect such a lush, vibrant, and tropical place to boast some of the most innovative architectural designs in the world. The country is so committed to marrying the natural and metropolitan worlds that it requires its developers to replace any greenery they might displace when constructing a new building. For this reason, it’s not so surprising that it will be the home of the world’s largest indoor waterfall, which is being built into the new “Jewel Changi Airport” extension of the existing Singapore Changi Airport. 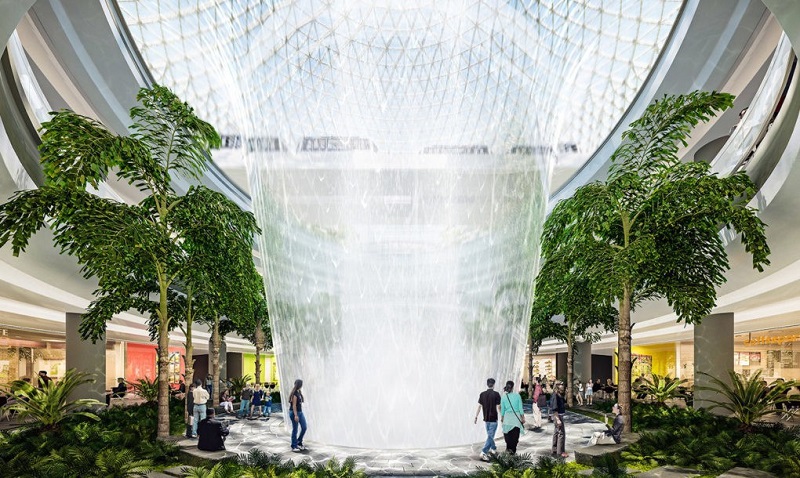 What better way to welcome visitors to a place known for its clever integration of architecture and plant life than a jaw-dropping feature like this? Imagine stepping off of a plane feeling parched and haggard after a long international flight and walking right into a temperate jungle with a 131-foot waterfall at its center, streaming out of a massive hole in the ceiling like something from a sci-fi movie. Conceived of by water feature design firm WET in collaboration with Safdie Architects, the cataract will stand as the centerpiece of ‘”Forest Valley,” the airport’s new indoor garden. 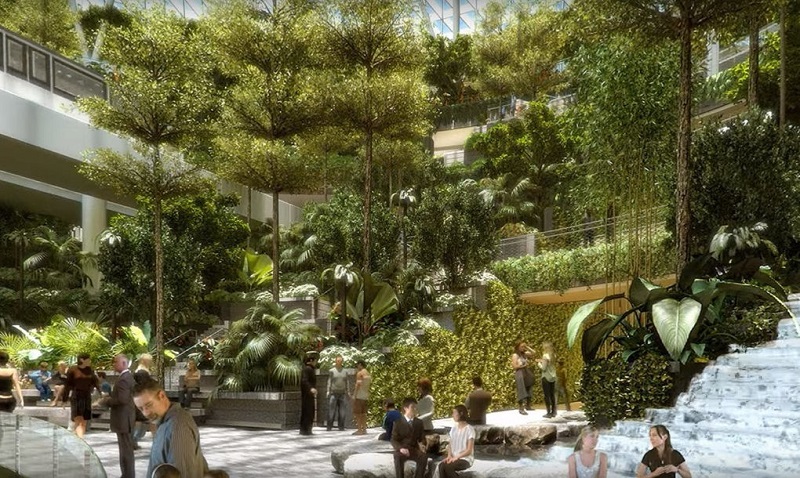 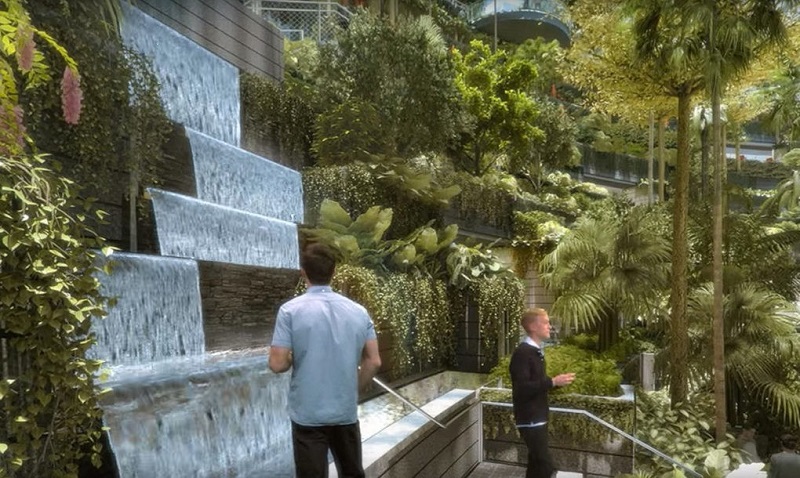 Set beneath a massive glass dome, the forest will be planted in a series of tiers to resemble a hilly landscape. In the space of 1.4 million square feet, this sprawling urban park will house a series of elevated walkways, hiking trails, and rest areas alongside its retail, hotel, restaurant, and entertainment facilities. To better blend in with the aesthetic, the dome will be supported by tree-like structural columns. After dark, the central waterfall will light up, cycling through an array of vivid colors as part of a choreographed LED light show. 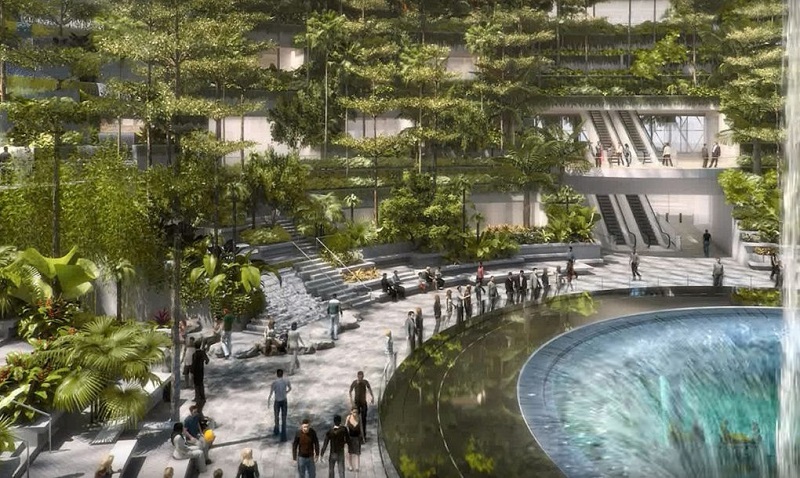 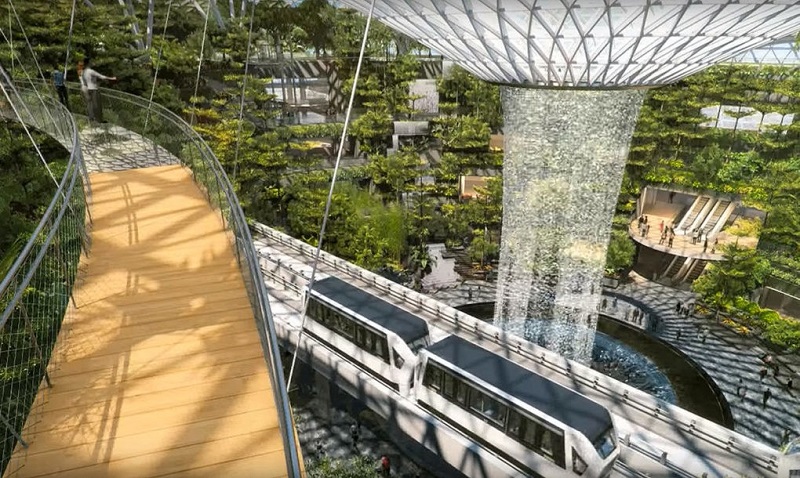 “The project redefines and reinvents what airports are all about,” says architect Moshe Safdie. “Our goal was to bring together the duality of a vibrant marketplace and a great urban park side-by-side in a singular and immersive experience. The component of the traditional mall is combined with the experience of nature, culture, education and recreation, aiming to provide an uplifting experience. By drawing both visitors and local residents alike, we aim to create a place where the people of Singapore interact with the people of the world.” 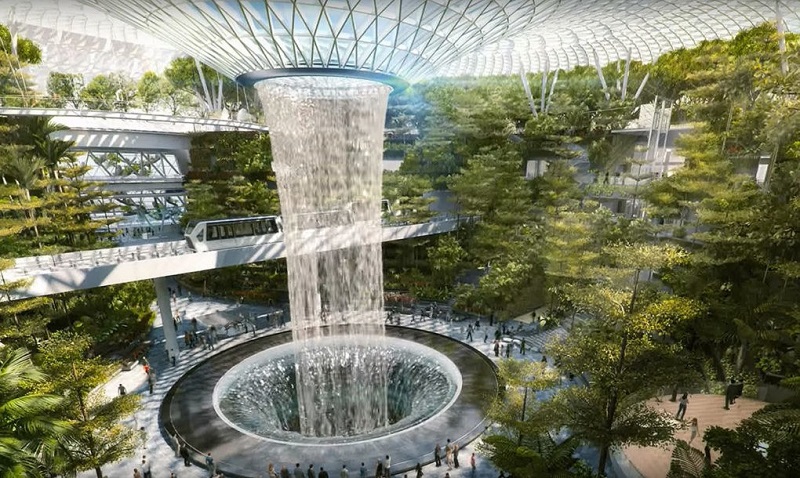 You might be thinking that this whole thing looks like a colossal waste of natural resources or that the humidity created by the waterfall would fog the dome’s glass up, but Forest Valley’s designers and engineers have already thought those potential kinks through. To maintain the waterfall and its surrounding vegetation, the Jewel Changi will be equipped a rainwater harvesting system. After conducting a series of airflow studies, the architects were able to come up with a design for the dome that prevents humid air from accumulating around the cascade. The airport extension is currently under construction and is expected to reach completion in 2019. 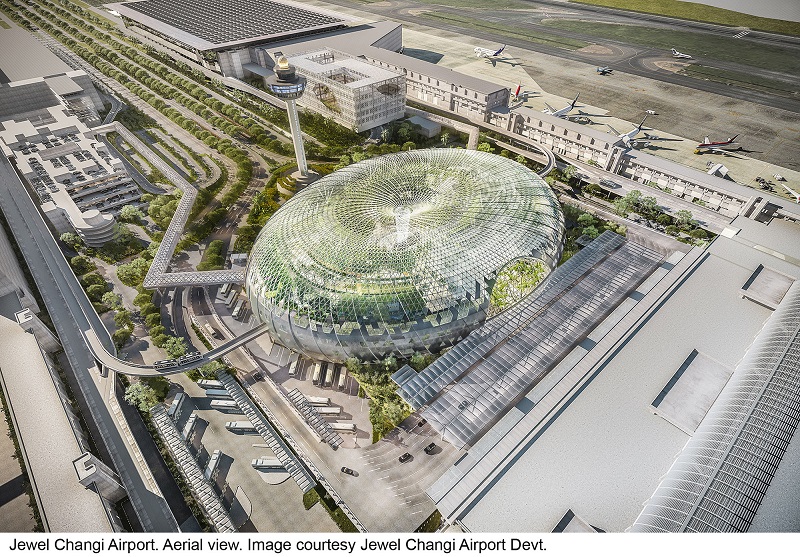 Surely, any layovers or delays you experience at this airport will be some of the best you’ve ever had to endure. Maybe one day, people will even start going to the airport for fun.