Living in a place where it snows all winter long isn’t always all it’s chalked up to be. It’s easy for people living in warmer climates to romanticize white winters filled with shimmering landscapes, ice skating rinks, ski lodges, and hot chocolate. The unfortunate reality includes a lot more shoveling snow and shivering than those people would imagine, but that doesn’t mean that some type of balance can’t be achieved.

Take, for instance, this highly unusual prefabricated home in Stockholm, Sweden. Conceived of by Street Monkey Architects, the roof of the “Pulkabacken House” (Swedish for “Sledding Hill”) doubles as a bunny slope. 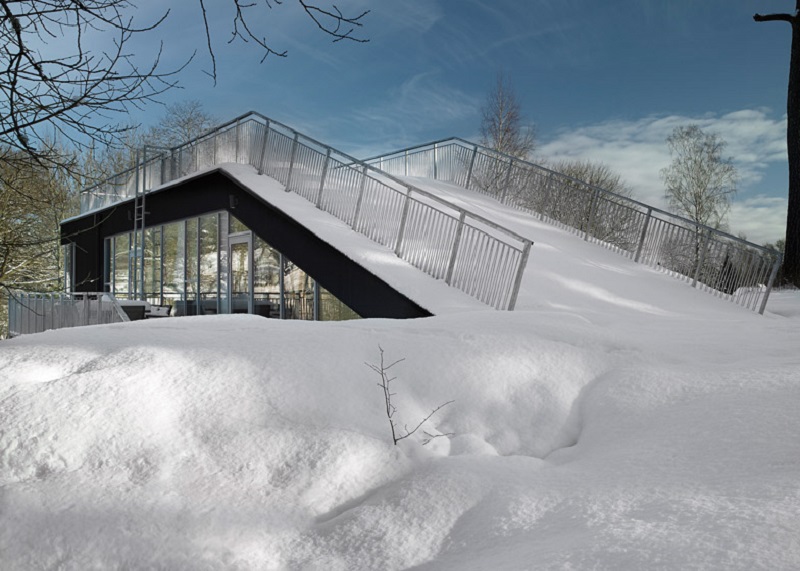 Pulkabacken House is deceptively simple when viewed from the back. Constructed from concrete modules and black steel panels, the home mostly looks like a standard modernist unit and contrasts beautifully with both winter snow and summer vegetation. Walk around to the front of the house, however, and you’ll think you’ve accidentally wandered into a ski resort. 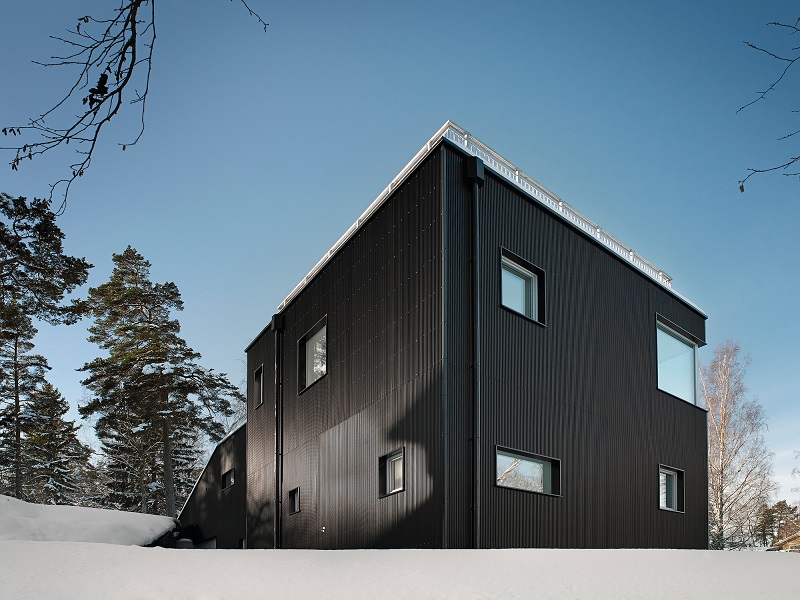 Built on a sloping site on Värmdö, an island in the center of the Stockholm archipelago, Pulkabacken House is warmed and protected by its neighboring hillside. The clients wanted their home to feel like a refuge, camouflaged and obstructed when viewed from the road despite its close proximity to other houses. In reality, the architects chose to angle the home’s roofline down toward the higher end of the hillside for privacy purposes just as much as they did for recreational ones. 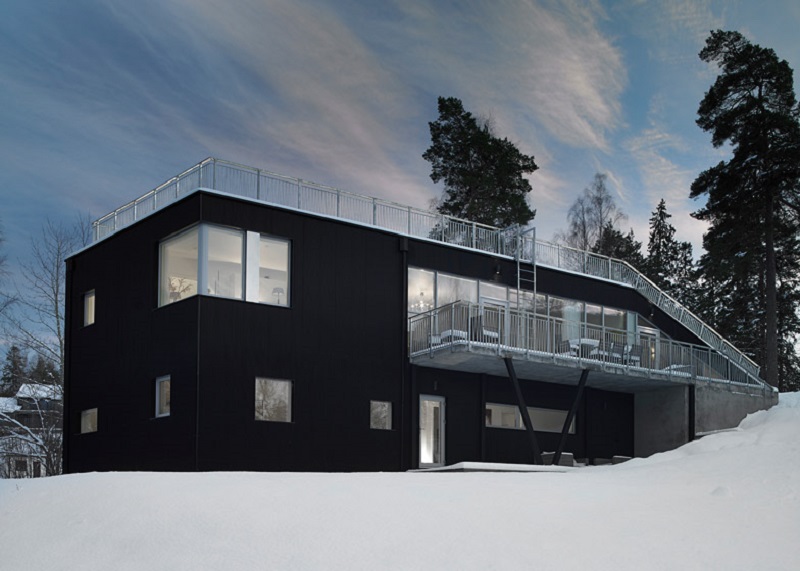 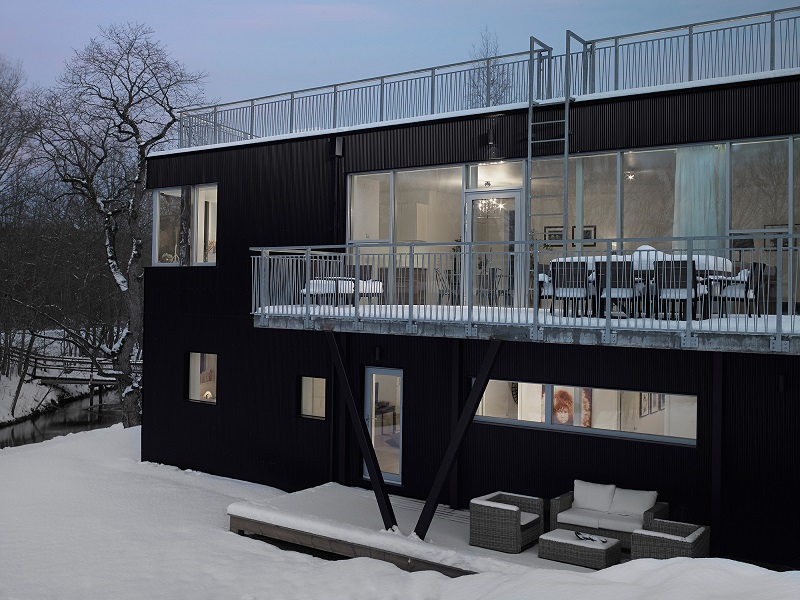 Most of the ramp’s surface has been made smooth for sledding fun. Below, on the home’s second story balcony, a ladder conveniently leads back up to the roof for those who want to go down the hill a second (or third?) time. This same balcony opens into the main living area, which looks out onto the sea. This floor boasts living and dining spaces, a kitchen with a study bar, a master bedroom, and two bathrooms. An internal stairwell leads down to the ground floor and features a cozy reading nook for those days when it’s just too cold to go outside. 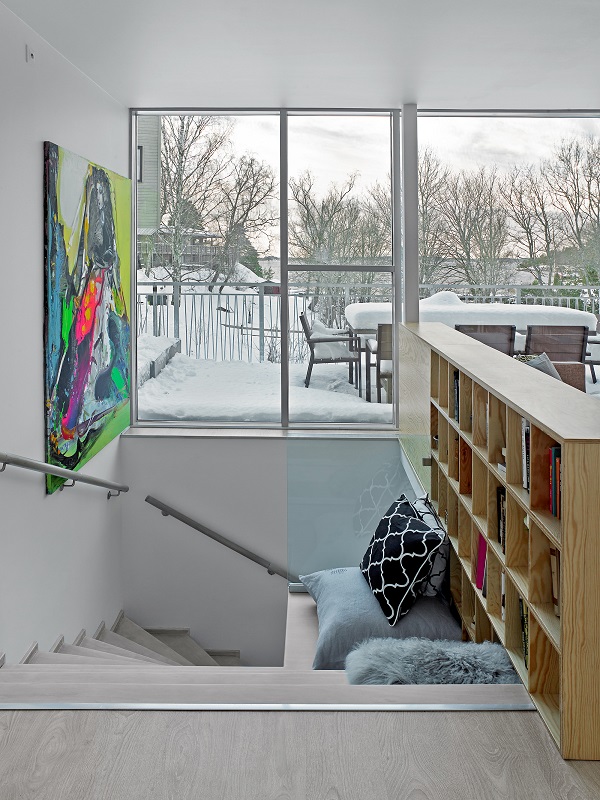 Three more bedrooms, a family room, and a bathroom are all located on the Pulkabacken House’s bottom level, along with an outdoor terrace that steps out into a garden. The entire interior makes heavy use of a wintry color palette, whose recurring shades of white and silvery gray help blend the home into the surrounding outdoor landscape. The result is very much in line with the clean, orderly aesthetic of modern Swedish design. 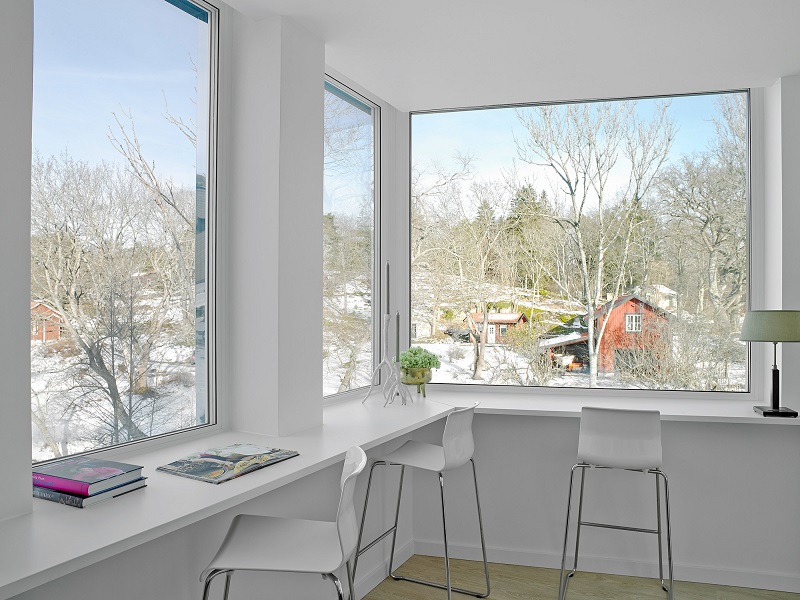 During the summer, the rooftop ramp is covered in grass, transforming the slope into a terrace that the architects have called a “party deck.” In fact, Street Monkey sees the home promoting a vacation lifestyle all year long. While most homes on Värmdö are only used in the summertime, Pulkabacken House seems to have been made for all seasons. Plus, as Stockholm continues to grow, more people are beginning to inhabit its surrounding islands beyond the summer peak season. 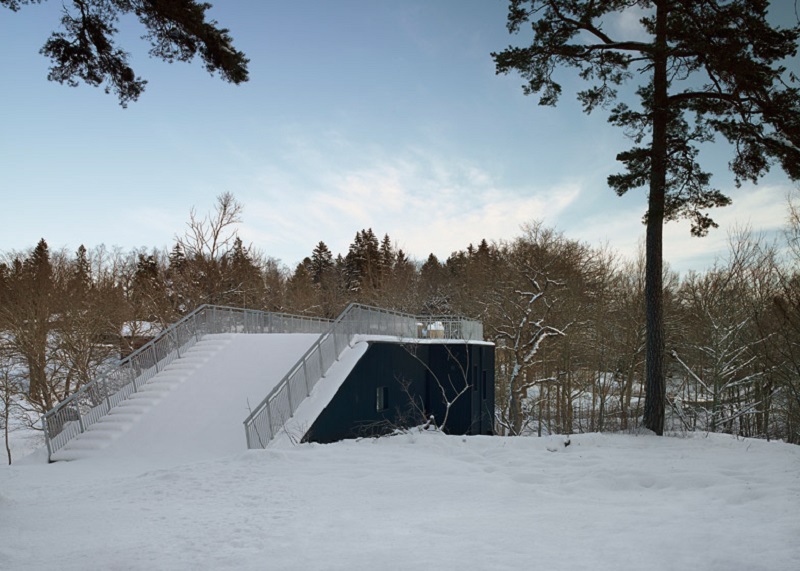 “In the summer, the population of this area doubles and children migrate in packs from house to house,” explains architect Cage Copher. “One night you could end up with all of your friends’ children sleeping over, so the bedrooms are large and many.” On the local reception to the sledding roof, he says, “The kids who live nearby seem to be making the most of it!”