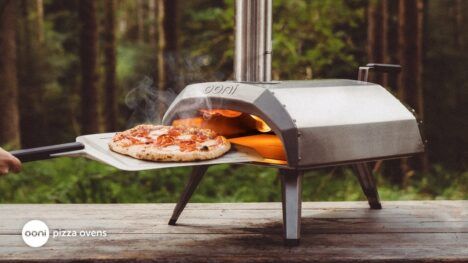 Wood-fired ovens produce pizzas of a singular quality, searing them at incredibly high temperatures to produce a slightly charred, crispy crust that’s still tender on the inside. Traditionally, the ovens are made of fireproof bricks in materials like terra-cotta, stone, clay or cob, and they’re very large and heavy.

But fans of crispy, smoky wood-fired pizza can now achieve similar effects at home without investing in a space-hogging conventional oven of their own. The Ooni Karu is a portable wood-fired pizza oven that breaks down into such a compact package, you could take it camping, tailgating, or to the beach. 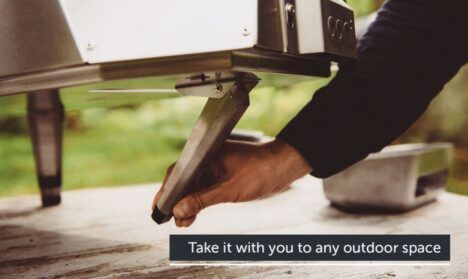 Cooking with real wood and charcoal, the oven is capable of heating up to 932° F, just as hot as the ovens you see at pizzerias. It also gets to work a lot faster than you’d imagine. Just fifteen minutes after starting a fire, you’re ready to cook, and then it takes just sixty seconds to heat up a pizza to bubbly perfection. 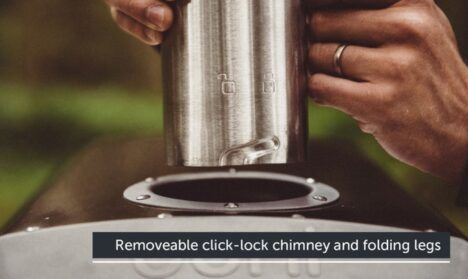 The Ooni Karu features a thick stone baking board to retain heat, as well as a removable click-lock chimney and folding legs. It’s made of high-grade stainless steel and packed with ceramic fiber insulation with a perforated fuel tray that maximizes airflow. It weighs just over 26 pounds (12 kilos) which the creators say is about the same as a case of beer. 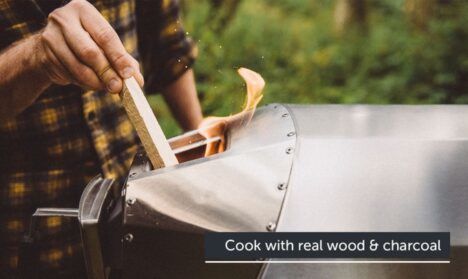 What is likely to consume the most time out of the whole pizza-cooking process is just waiting for the oven to cool down after use so you can pack it back up. Show up with this thing to a party and you’ll probably be the most popular person there.

This model is the most recent (and most advanced) iteration of the stove by Ooni, which launched the world’s first portable pellet pizza oven on Kickstarter in 2012. They’ve taken feedback from early users and translated it into an updated design that can be used with an optional gas burner for even more convenience.

“Cook with real wood and charcoal, or both, with Ooni Karu. Designed for use with high-quality solid fuels, it becomes a roaring inferno so you can fire out epic pizza. Ready to start cooking in 15 minutes, Ooni Karu heats to 932°F, or 500°C, and cooks incredible pizza in just 60 seconds. Ooni Karu is also ideal for cooking wood-fired meat, fish and vegetable dishes.”

“The oven’s extra thick stone baking board retains heat for longer, whilst the superior insulation means Ooni Karu holds onto more heat for an efficient burn and less fuel needed to reach those soaring temperatures. Ooni Karu is also compatible with the Ooni Gas Burner if you prefer to cook with propane.”

There’s still time to hop on the Ooni Karu Kickstarter campaign as a backer for early bird deals. $259 gets you a single oven at 26% off the retail price of $349, or you could choose from a tier of other rewards that add carrying covers and pizza peels to the package.