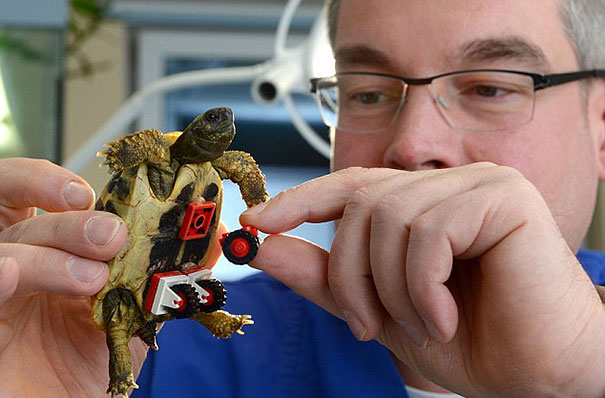 Internationally recognized and beloved by people of all ages, LEGO bricks have earned their reputation as creatively stimulating toys. The possibilities of what can be built with LEGOs are virtually endless, and that’s exactly what makes them so fun. Of course, these little plastic blocks are useful well after playtime is over, whether they’re being incorporated into modern furniture designs or colorfully filling in damaged patches on a building’s exterior. Now, one of the most unexpected LEGO creations is giving disabled animals a new way to get around.

When an injured turtle was brought into the Maryland Zoo’s hospital, doctors patched up damage to the underside of his shell, but they weren’t sure how to keep him off it as he healed. Turtles tend to heal slowly because of their slow metabolisms, so the shattered fragments needed extra time to fuse back together.

“They don’t make turtle-sized wheelchairs, so we drew some sketches of a customized wheelchair and I sent them to a friend who is a LEGO enthusiast,” says Garrett Fares, veterinary extern at the zoo.

The result is pretty brilliant. Not only does the turtle’s new LEGO ride help him cruise around during the healing process, but it also preserves his ability to perform crucial turtle tasks, like fully retracting into his shell whenever he feels threatened. The external frame elevates and stabilizes the turtle’s shell and sits on four LEGO wheels. The clever assistive mechanism is held in place using plumber’s putty, so it doesn’t hurt the turtle at all. 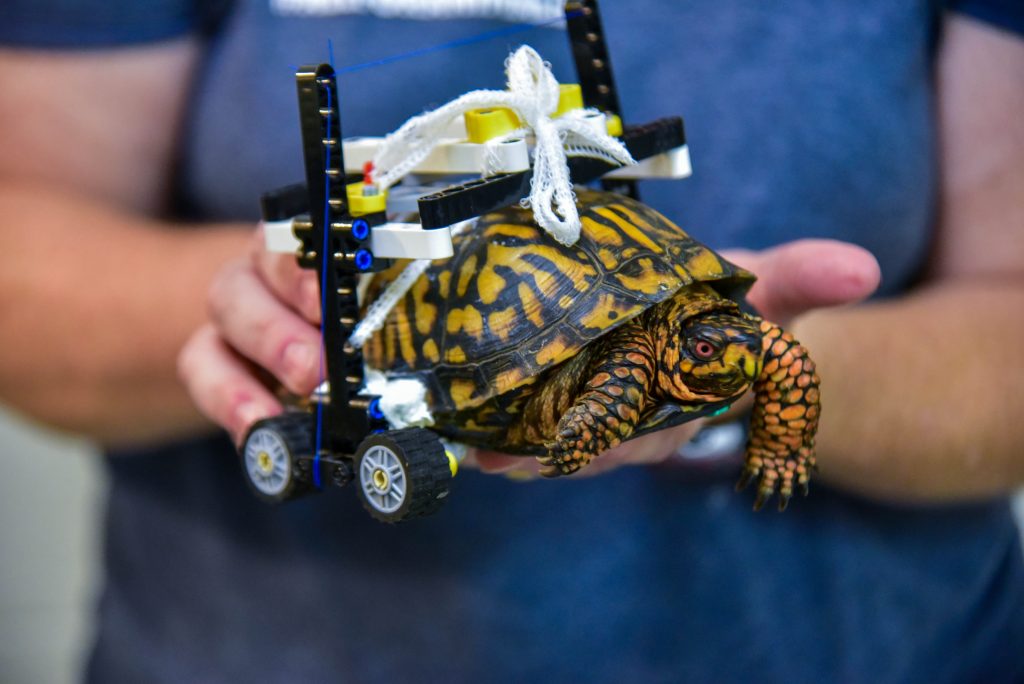 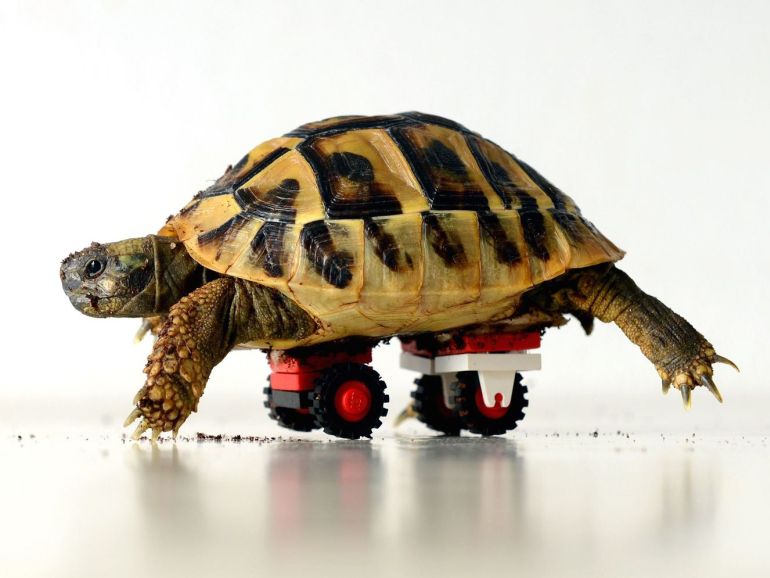 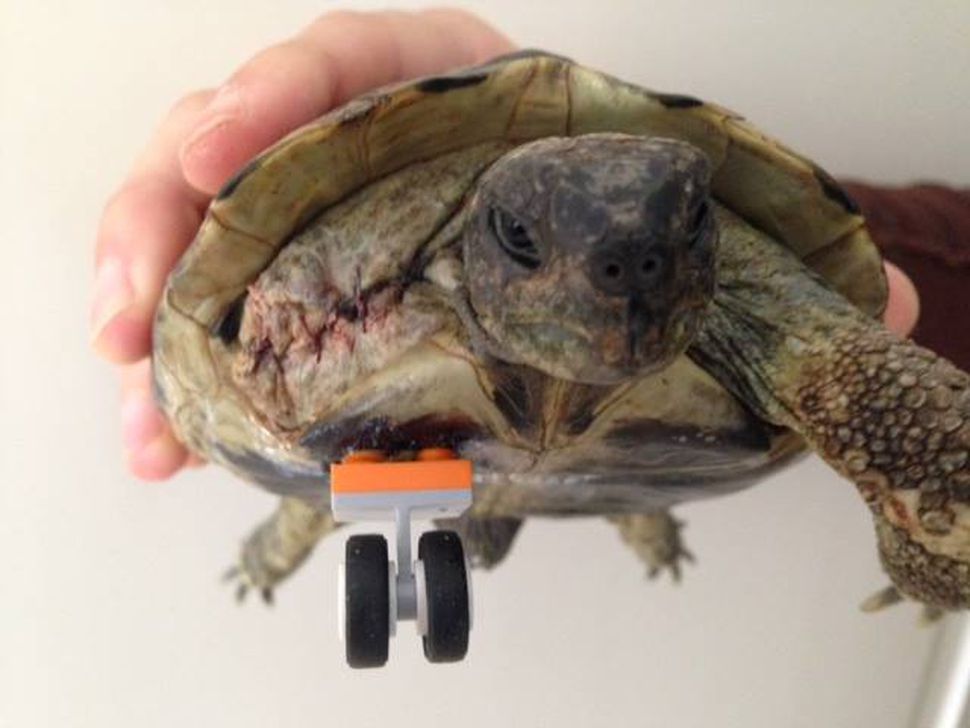 Believe it or not, this little guy isn’t the first animal — or even the first reptile — to get a LEGO wheelchair. Previously, a tiny tortoise named Blade got a shiny LEGO wheelchair of his very own when a growth condition weakened his legs, hindering his mobility. This chair’s three-wheeled design is a lot simpler than that of the last one, since Blade didn’t have a specific injury to protect. Elsewhere, Schlildi, a pet turtle living in Germany, was the lucky recipient of an awesome LEGO prosthetic after losing a leg.

A tiny hedgehog named Chappi was beginning to experience difficulty walking due to the adorably named Wobbly hedgehog syndrome, a degenerative disorder that can cause loss of muscle control. Upon realizing that she could no longer use her feet, Chappi’s owner built her a custom LEGO wheelchair that made a big difference in her quality of life. 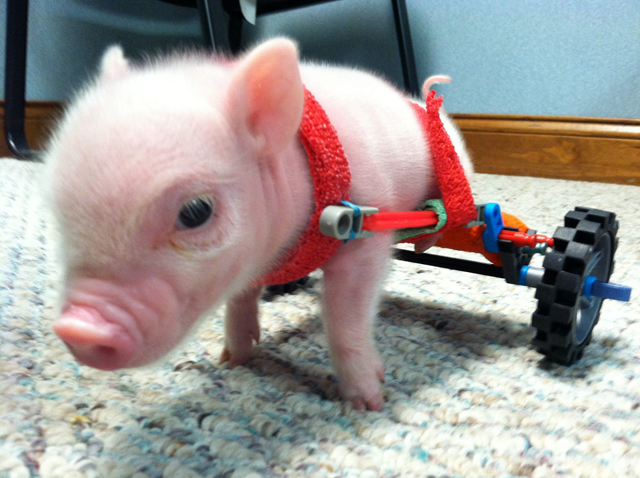 Another toy commonly used to build DIY wheelchairs for animals is K’NEX, a construction set that was widely popular in the 1990s. In 2013, a Florida veterinarian named Dr. Len Lucero fashioned a K’NEX wheelchair for a piglet named Chris P. Bacon, who was born unable to use his legs. Having since grown absolutely enormous, Chris now prefers to crawl around.

In Massapequa, New York, an abandoned kitten with temporarily paralyzed back legs graduated from a LEGO wheelchair to a K’NEX one as he got bigger. As an adult, “Mac N’ Cheez” — named after the box he was in when he was delivered to the vet — regained full control of his legs.