What could be more romantic than sleeping under the stars, especially in the Swiss Alps? Brothers and conceptual artists Frank and Patrik Riklin took that idea and flipped it on its head, creating an open-air hotel room that’s the antithesis of dreamy. 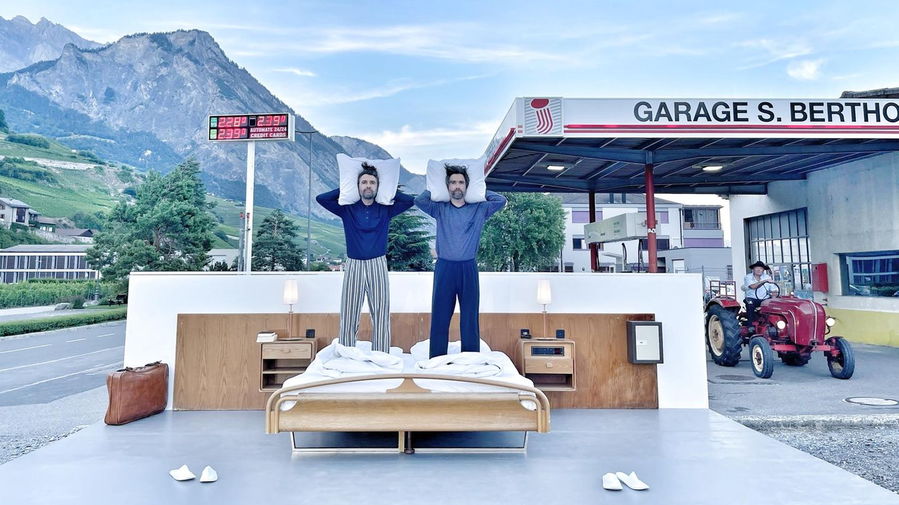 The “Anti-Idyllic Suite,” the latest installment of their Null Stern hotel chain, is located just off the freeway in the Saillon region of French-speaking Switzerland. Situated in the corner of a gas station parking lot, the “room” consists of a high-end queen-size bed atop a raised platform, flanked by mounted nightstands. Besides a half-wall behind the bed’s headboard, there are no true walls and no ceiling. Guests can watch customers fill their tanks, listen to the rush of freeway traffic, and be lulled to sleep with the smell of gasoline wafting through the air, all for 325 Swiss francs (roughly $340) a night. 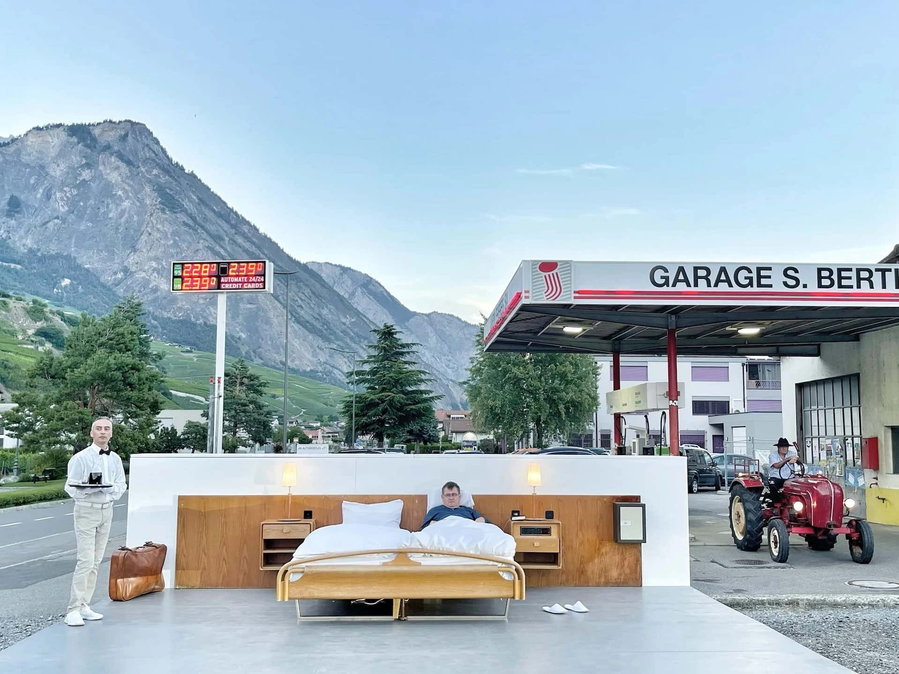 Why would anyone want to rent this hotel room? The whole point is that they wouldn’t. “Rather than a place of rest, this new version aims to keep you awake and offers a place of reflection on current affairs such as the climate, the economy, security, or equality,” the Riklin brothers explain on their website. “In view of the current world situation, there is no time to sleep,” they add.

The duo, who partnered with hotelier Daniel Charbonnier to produce the Anti-Idyllic Suite, encourage individuals, companies, schools, and associations to use the space “to exchange, brainstorm, or create ideas.” Former iterations of the Null Stern Zero Real Estate suites feature the same wall-less rooms but actually are located in picturesque locations. 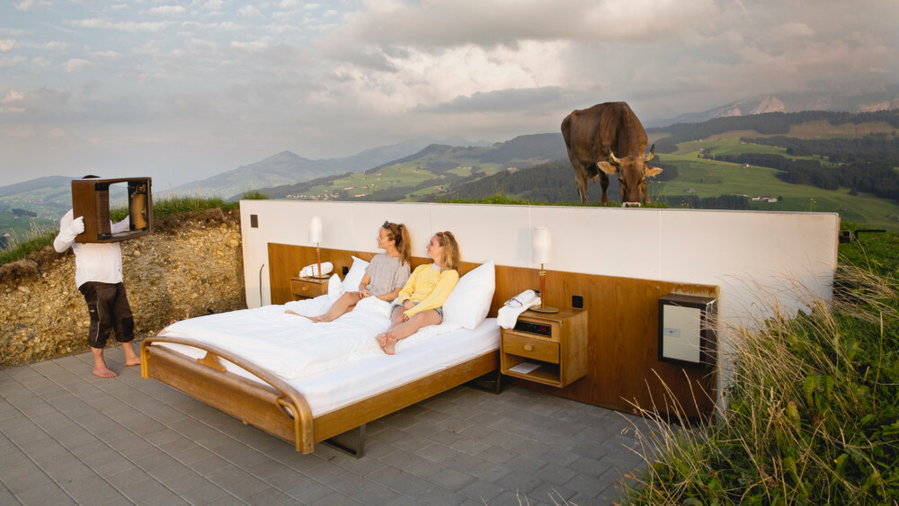 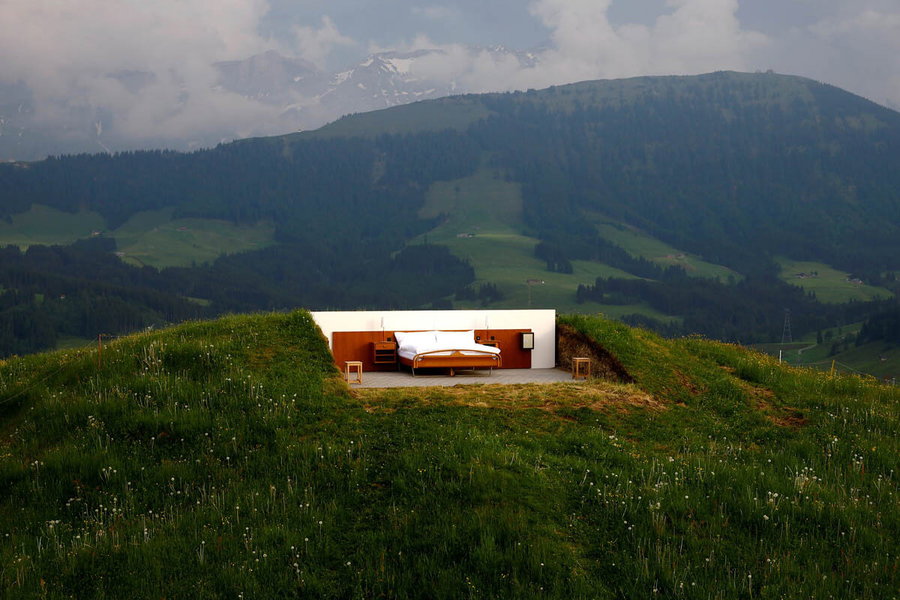 The Vineyard Suite sits on a small road in a valley of grapevines, with a magical view of a nearby medieval village and the tower of Saillon. The 13,000-foot-tall Bietschorn mountain forms the backdrop for this room. 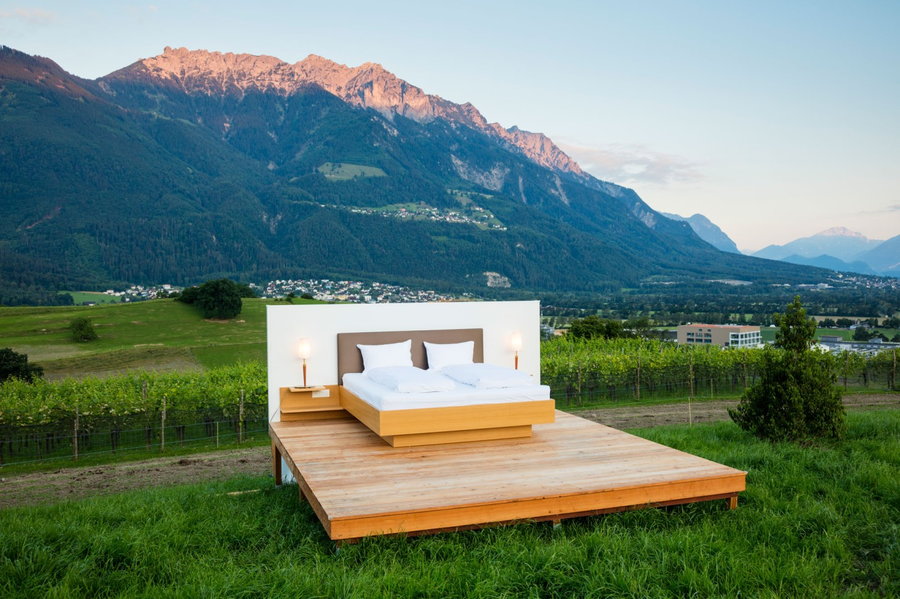 The Farinet Room is placed on a mystical hill in the same region called Colline Ardente, which also shares a home with the smallest registered vineyard in the world, with just three vines. While it was originally owned by a French actor, it changed hands to Abbé-Pierre, a World War II French resistance fighter and Catholic priest. He in turn gifted it to the Dalaï Lama, who still owns the deed today. This Null Star spot has become something of a pilgrimage spot for global travelers. 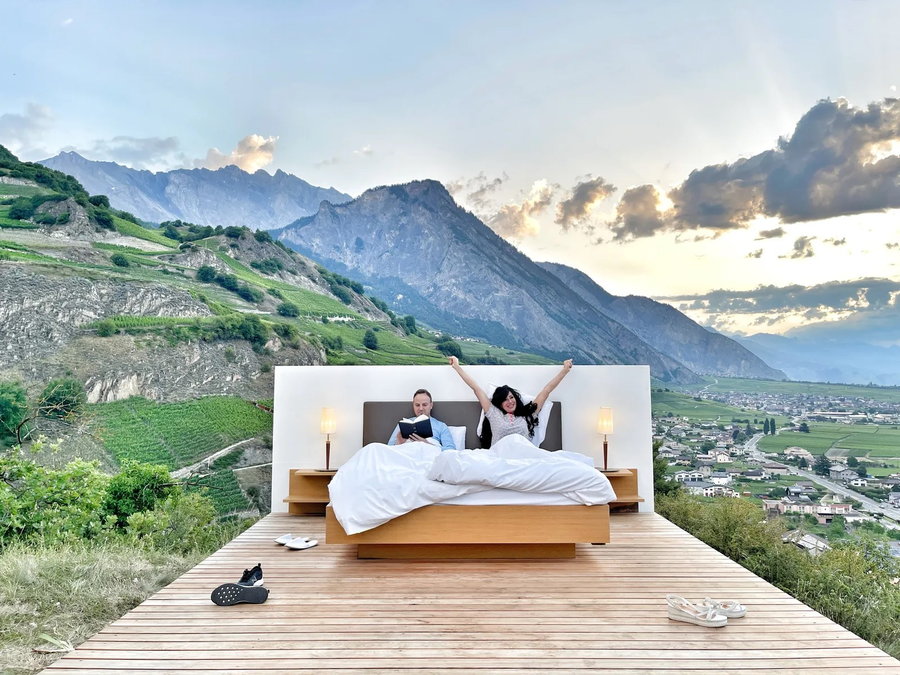 The Bayart Suite is named after the 13th-century tower located on the same hill. With the Ardévaz mountain in the background and vistas of the Rhône Valley all around, it’s secluded while still providing amenities within walking distance.

While they’re not four-star hotels (the company website boasts that “the only star is you”), each Zero Real Estate booking comes with “a welcome drink with local organic finger food, breakfast pastry from a local bakery with fresh fruit juice from the region, as well as the service of a Modern Butler.” More importantly, each includes a reservation at the nearby Hôtel des Bains de Saillon in case of bad weather. 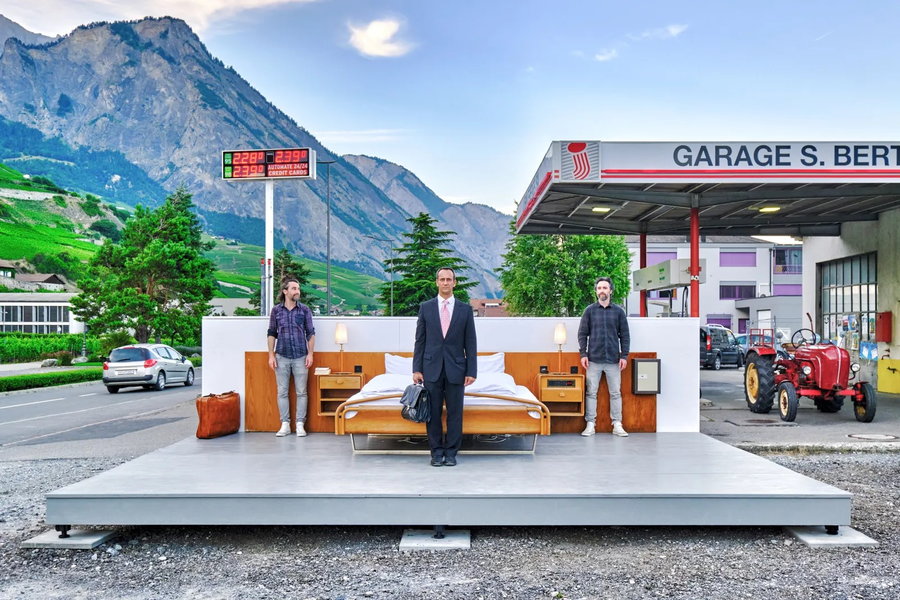 The suites, including the Anti-Idyllic Suite, are only open from July to September for that reason. Reservations can be made on their website, although rumor has it that there’s currently a 6,000-person waitlist.