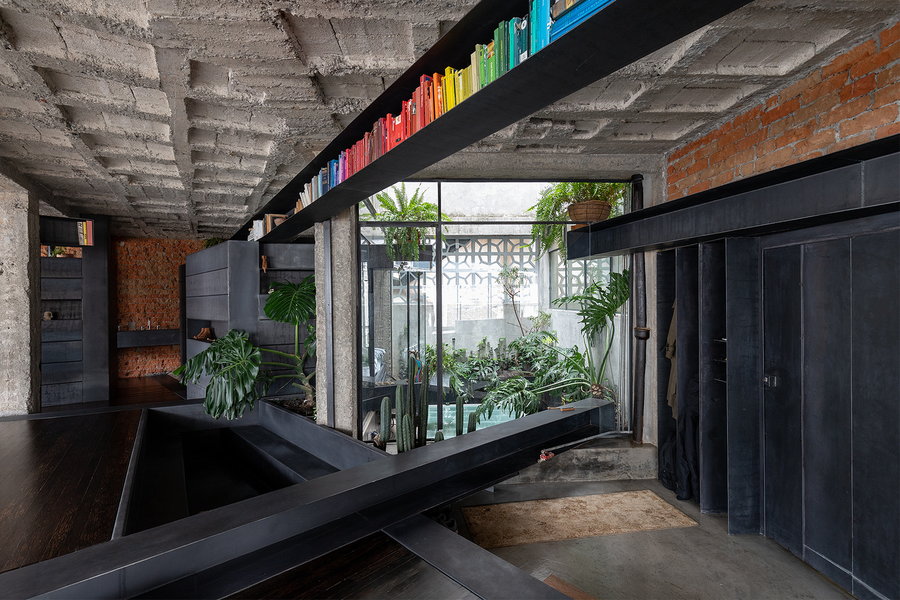 Humans have been living in cities for thousands of years, and the United Nations estimates that by 2050, 68 percent of the world’s population will have moved to urban areas. There are lots of clear benefits to city life, like access to jobs, culture, restaurants, shopping, mass transit, and each other, but the noise, stress, and constant activity that comes with it can wear on even the most ardent urbanist over time.

There are plenty of ways we can make our cities more livable and relaxing, like bigger green spaces, pedestrian-only zones, and the replacement of loud diesel vehicles with greener, less polluting technologies. But what about our personal spaces? Can’t they be designed in a way that satisfies our desire for a connection with nature, even if we live in an urban high-rise? 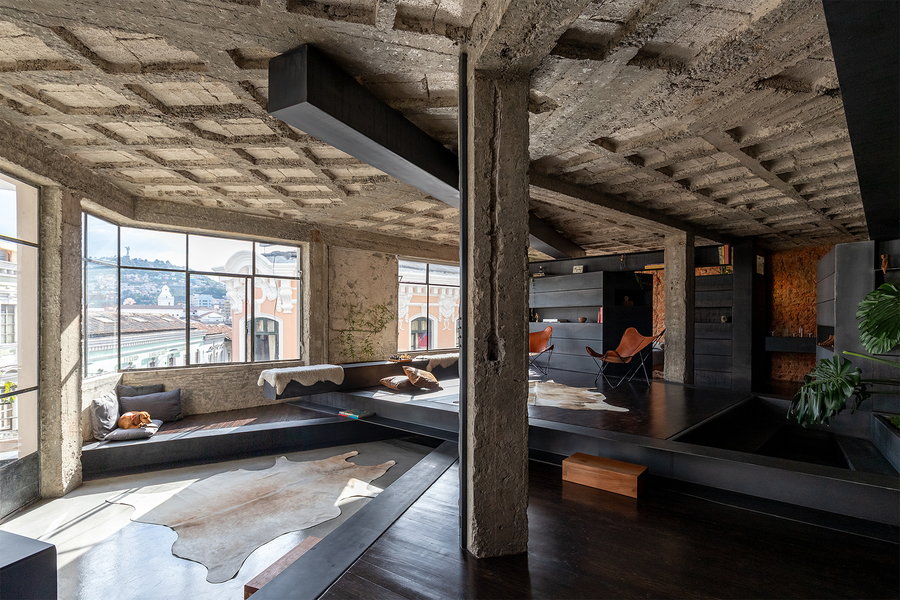 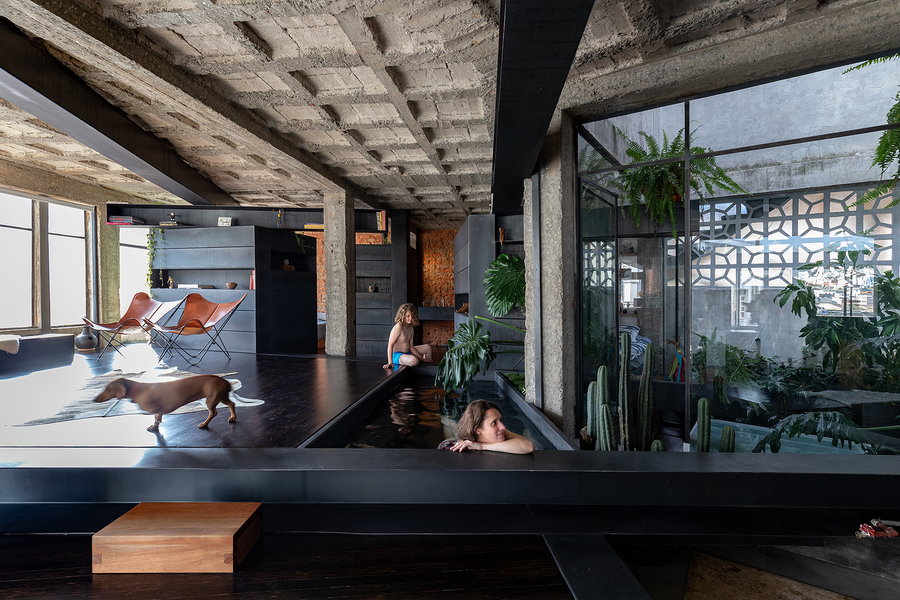 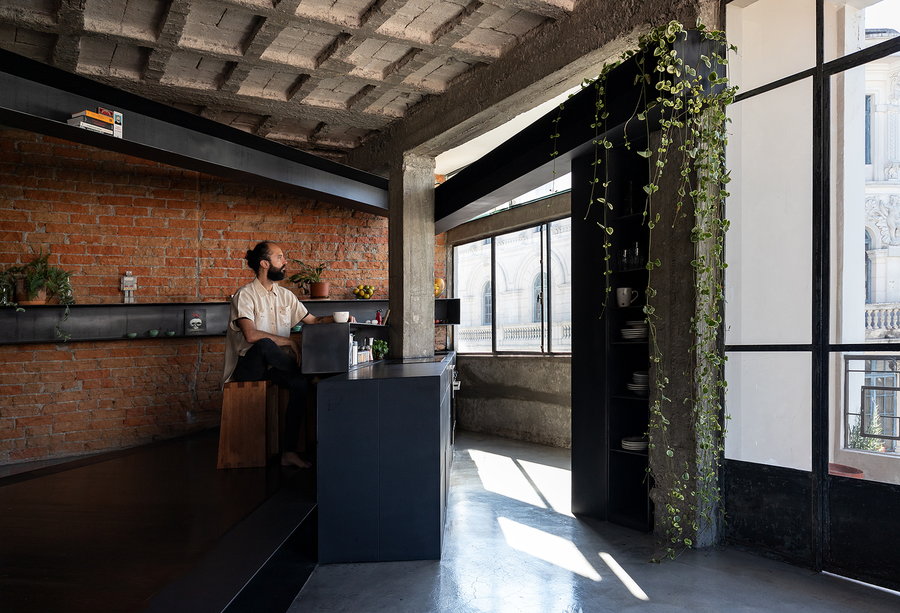 Architect Aquiles Jarrín has completed an interesting experiment with “Bosque Apartment,” an intervention in a 1970s apartment in the historic center of Quito, Ecuador. The 112-square-meter (1205-square-foot) space features modern, often industrial materials, but it’s laid out in such a way that it conveys the feeling of living in an “indoor forest.”

“The project starts from an investigation carried out with the owners, from which several fundamental ideas emerged such as the importance of generating less defined spaces, the central role of the social area, diffuse divisions between spaces, and a strong presence of nature within the apartment,” says Jarrín. 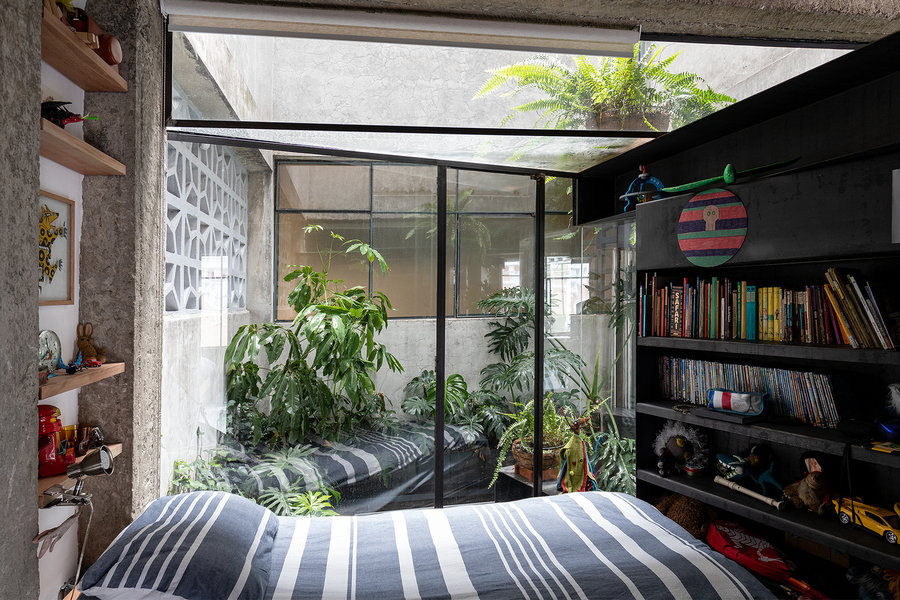 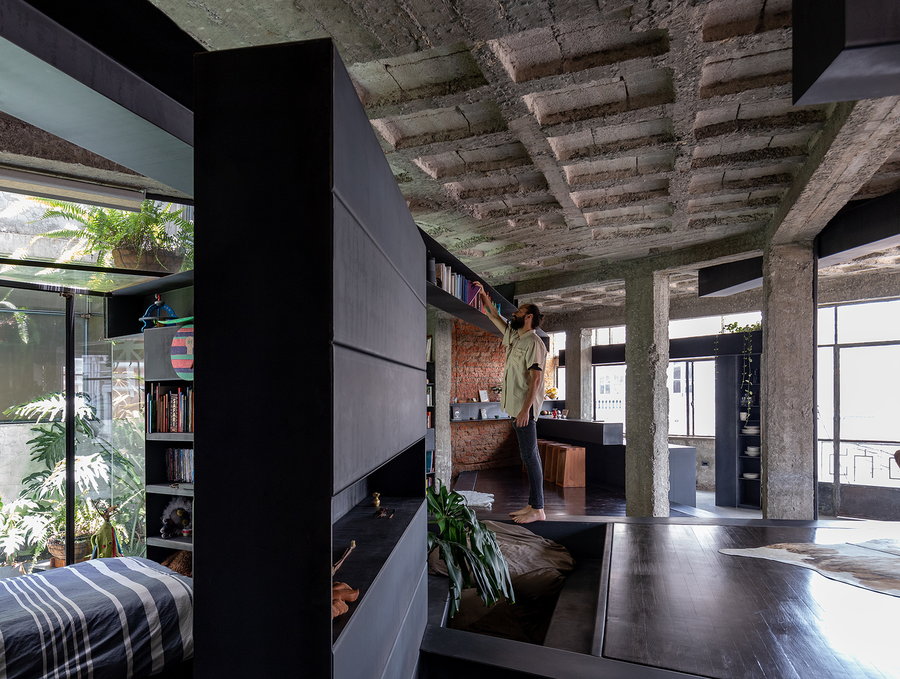 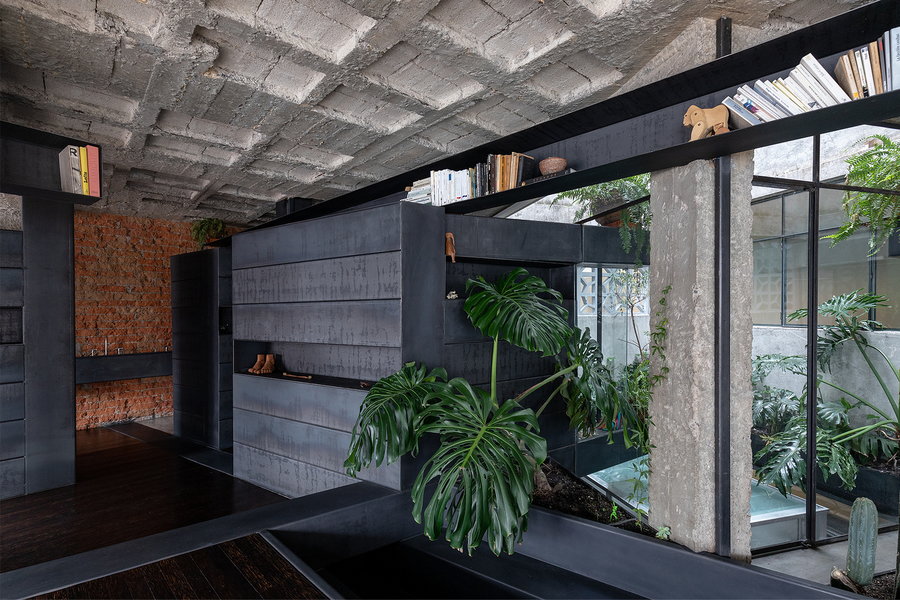 The apartment already had an existing “air and light well” in the form of an interior courtyard and lots of textural concrete, much of which was previously hidden behind interior walls. The renovation knocked down these walls, including the ones blocking off the courtyard. New doors and windows blast the once dark space with daylight, air, and access to a garden that’s exposed to the elements.

“Without walls, the columns of the concrete structure acquired a strong presence, inviting us to work with this element as a basic unit of the project,” Jarrín explains. “In addition, this configuration of elements triggered a poetic dimension of the work, [in which] the columns ceased to be columns [and] started being called trunks. This metaphor of space defined the entire design and understanding of the project. The idea of not being in a domesticated space arose, inviting one to enter a wilder world, ‘a forest.’” 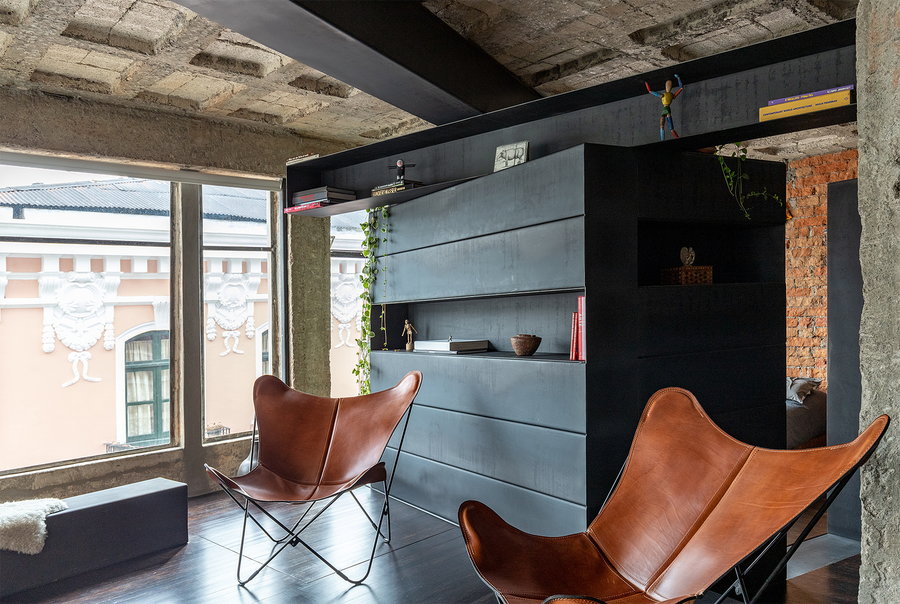 The architect introduced new elements with the same proportions as these concrete “trunks,” inserting them at random diagonal angles to break the rigid patterns imposted by human creations and mimic something more natural. By overlapping these black metal “logs,” new floor levels were created. Standing among them are matching built-in elements packed with shelves, surfaces, and storage cabinets. 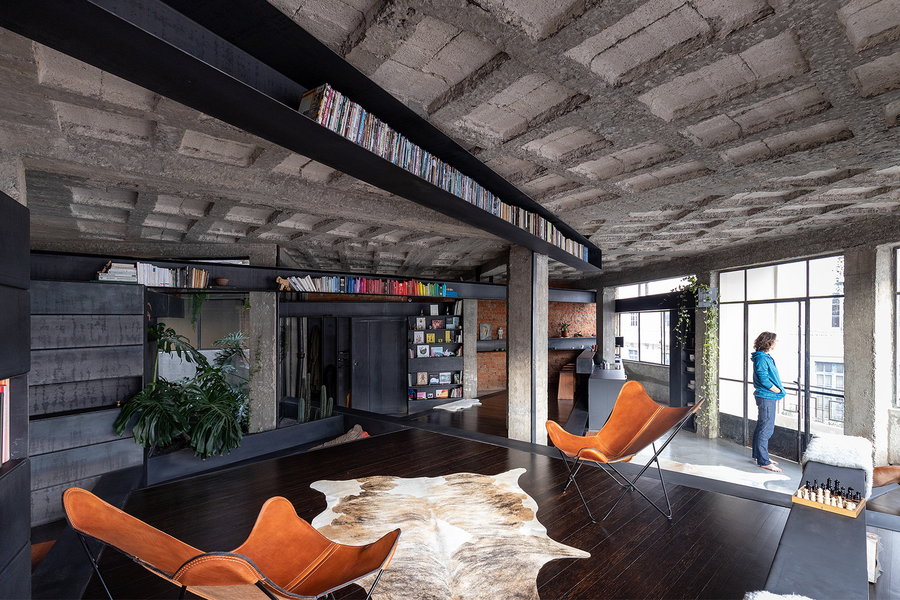 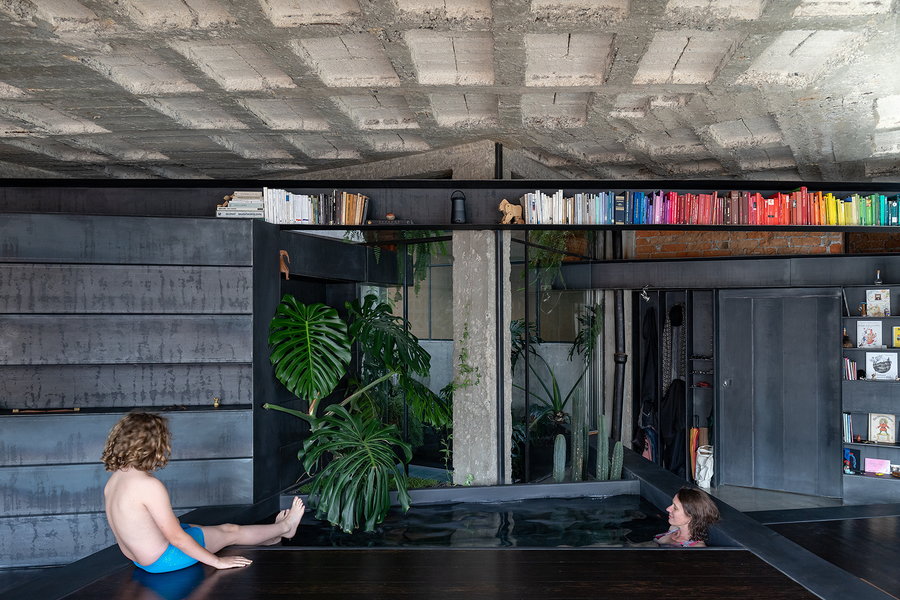 Instead of one continuous plane, the floors step up in some areas and recess in others, creating a dynamic landscape. The introduction of wood floors brings in another reference to nature while setting off the black metal and concrete. Red brick, a rainbow of books on the shelves, and lots of indoor plants add pops of color and vitality. The cherry on top of this striking design is the sunken indoor pool overlooking both an indoor cactus garden and the outdoor courtyard.