Beaming down like an artificial sun, this outdoor sanitizer by Studio Roosegaarde uses ultraviolet light to reduce transmission of COVID-19. “Urban Sun” uses a fairly new technology called far-UVC to safely kill up to 99.9 percent of virus particles without harming people or animals, enabling gatherings in outdoor spaces after dark. 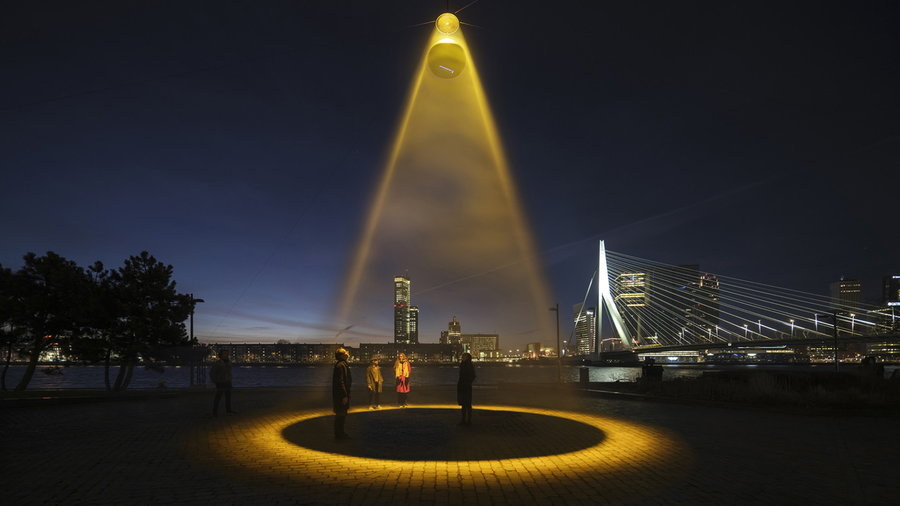 Installed using a system of cables, the lamp is designed with spaces like sports fields, public squares, train stations, and schoolyards in mind, shining a large circle of far-UVC light that sanitizes the air beneath it. Far-UVC light is invisible to the naked eye, of course, so the Urban Sun also incorporates conventional light sources to help people visualize how it works and see exactly where the “safe area” begins and ends. Studio Roosegaarde installed the first Urban Sun light in Rotterdam earlier this year as a demonstration, though future installations could string together multiple lights to accommodate larger crowds. 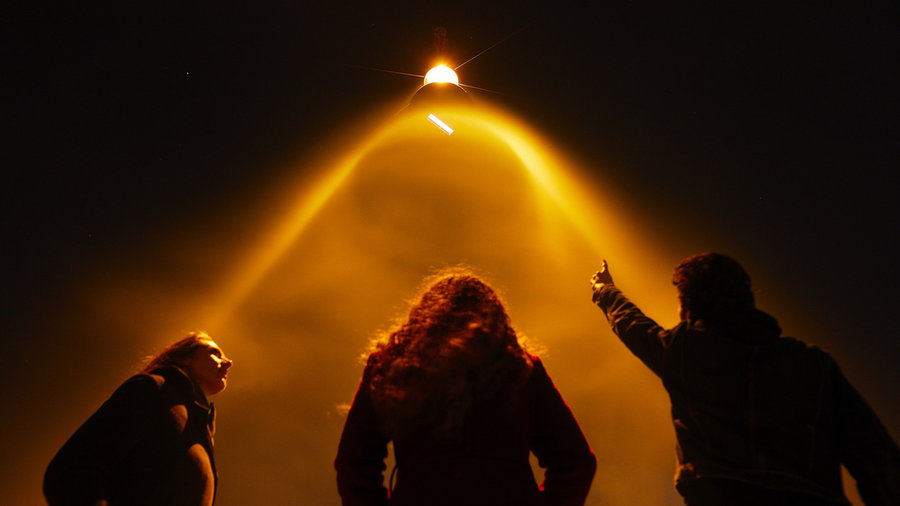 The designers worked with experts and scientists from the Netherlands, the United States, Japan, and Italy to create Urban Sun, with its far-UVC light source measured and calibrated by the Dutch National Metrology Institute VSL. The light also meets international safety standards on Non-Ionizing Radiation Protection. Studio Roosegaarde is making Urban Sun available for exhibitions and inviting governments and other partners to collaborate with them to get more installed. 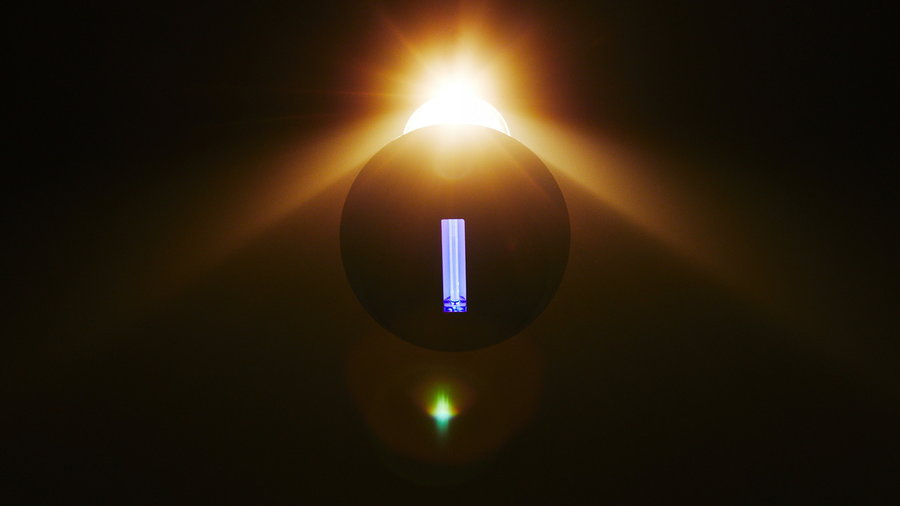 Studio Roosegaarde doesn’t claim that Urban Sun is the ultimate solution for ending transmission of the novel coronavirus and other diseases. They call for continuing social distancing and masking as primary strategies to combat the pandemic, and note that most transmission occurs indoors. But what the Urban Sun can potentially do is make people feel safer gathering in large crowds outdoors, so big cultural events like concerts and festivals could theoretically resume around the world. 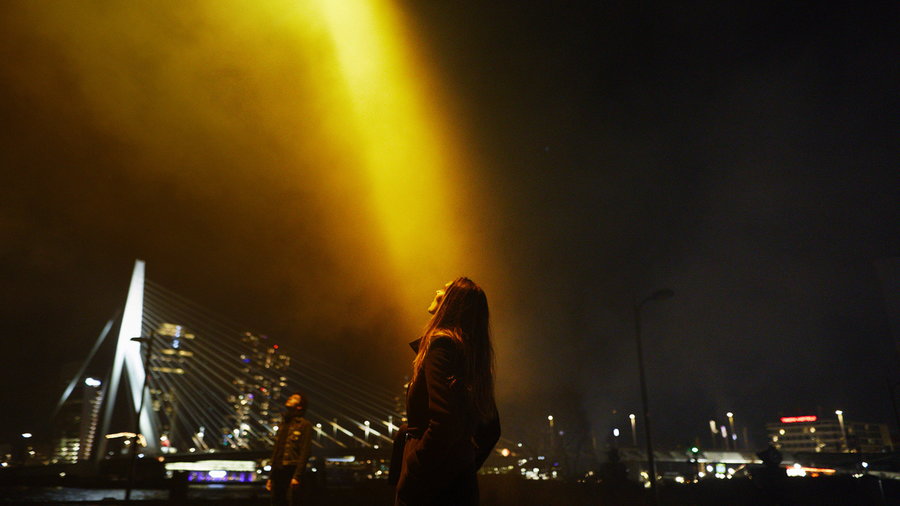 Lead designer Daan Roosegaarde told Dezeen he imagines Urban Sun being used at events as large as The Olympics and Burning Man, as well as design festivals like the Salone del Mobile in Milan. The studio is also exploring the possibility of adapting the design for indoor use.

“Suddenly our world is filled with plastic barriers and distance stickers, our family reduced to pixels on a computer screen,” adds Roosegaarde. “Let’s be the architects of our new normal and create better places to meet.” 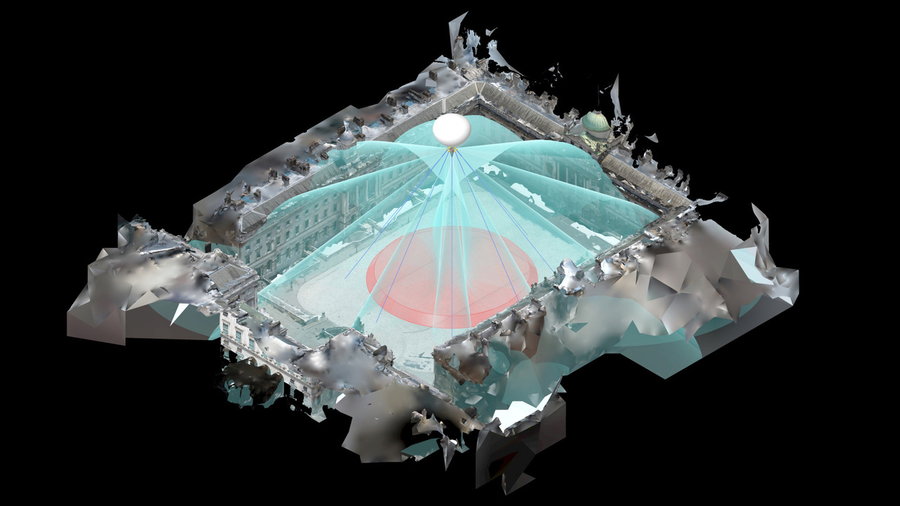 Conventional germicidal UVC light at 254nm wavelength is highly effective at decontamination, but it’s also a health hazard. Far-UVC has a 222nm wavelength incapable of penetrating the outer layer of skin or the tear layer of the eye, so it can’t damage living cells in the body. While Studio Roosegaarde says Urban Sun could sanitize the surrounding air in as little as two minutes, most research has shown that it takes far-UVC technology about 16 minutes to kill 99 percent of airborne viruses. 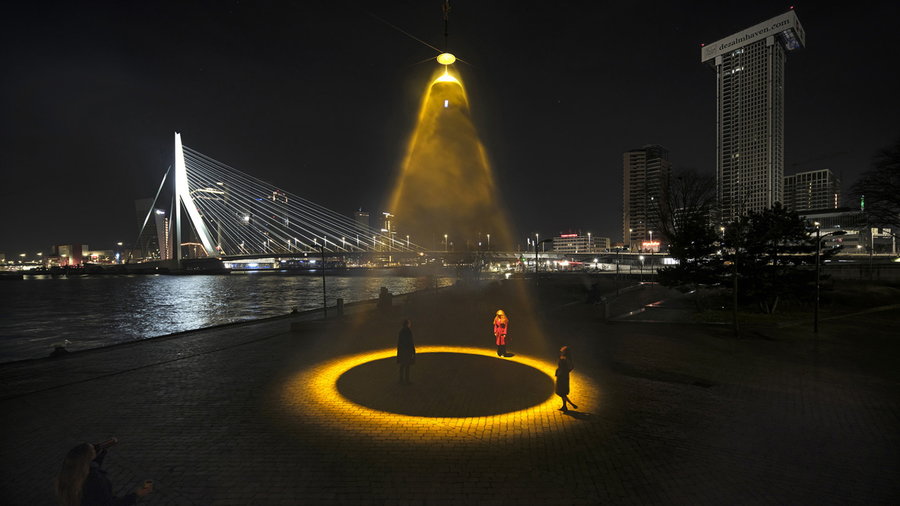 We’ll likely be seeing a lot more far-UVC devices pop up in the near future, both indoors and out. Even Boeing has been exploring ways to incorporate it into its airplanes for years now, and is currently testing far-UVC handheld wands in passenger airplane cabins and cockpit interiors.