Christmas Eve has always been a day known for miracles. On December 24, 2017, China added yet another manmade wonder to the world by unveiling the world’s longest all-glass bridge. Throngs of tourists and locals were lined up to experience the bridge in all its might. 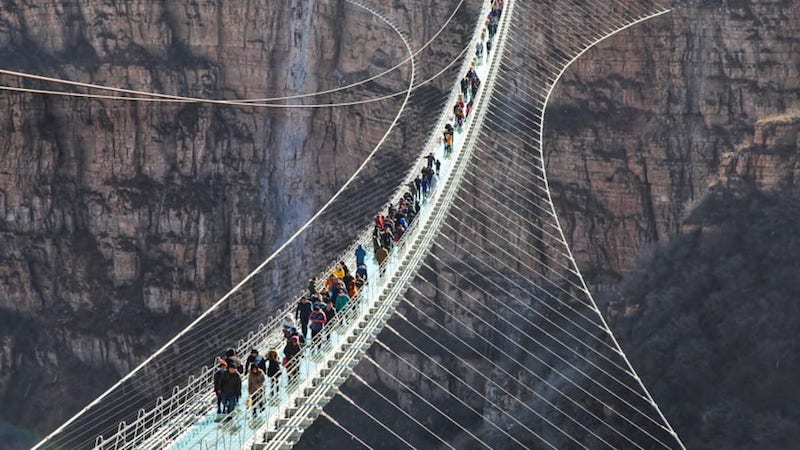 Gently swaying over a stunning canyon in China’s Hongyagu Scenic Area (which itself is located in the country’s Hebei province), the 70-ton bridge spans 1,601 feet — well over the length of five professional football fields. The walkway is made out of 1,077 1.5-inch thick glass panels and runs between two mountain peaks inside the park. In total, the bridge is 715 feet off the ground, which roughly translates to the height of a conventional 66-story building. Not as scary as the 102-story Empire State Building that King Kong scaled, but definitely tall enough to trigger a fit of vertigo. 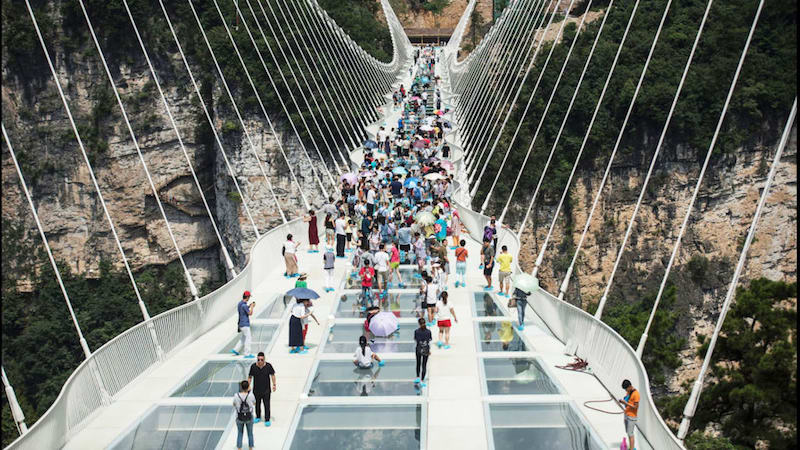 The Hebei Bailu Group, the company that spent three years building the bridge, hopes that the structure’s swaying motions will serve to further delight visitors as they take in the incredible scenery on their way across the walkway. Yang Minghua, the chairman of the group, proudly announced, “Hongyagu glass suspension bridge marks the 2.0 era for China’s glass-bottomed bridge.”

The Hongyagu Glass Bridge has easily bested the 1410-foot length of the Zhangjiajie Grand Canyon Glass Bridge, another Chinese wonder that previously held the distinction of longest glass-bottomed suspension bridge in the world. Of course, the Zhangjiajie bridge still boasts the highest span in that category with a vertical drop of 984 feet. 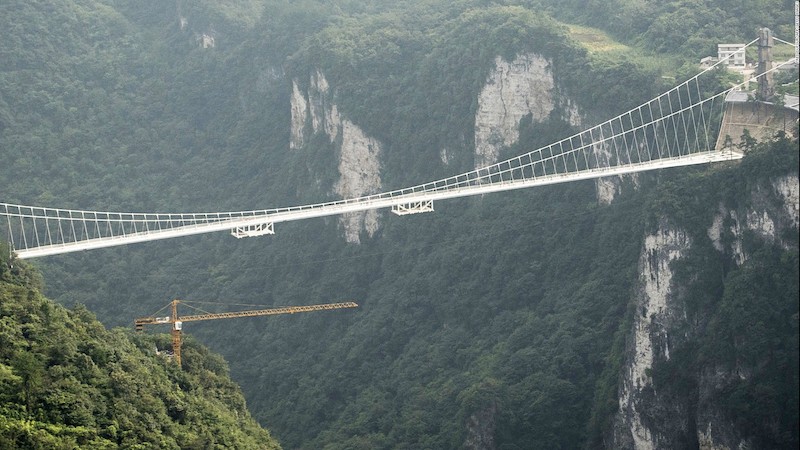 Although China’s glass bridge and walkway projects have terrorized a few visitors, most of them remain undaunted.

In 2015, a group of Chinese tourists screamed in horror on the side of a 3,540-foot-high cliff in Henan after a glass panel on a freshly-built transparent walkway suddenly shattered. In the same year, a tourist in China was petrified while walking across the glass-floored Yuntain Mountain Walkway when the glass pane below his feet began to splinter. The bridge temporarily closed for repairs immediately after the incident.

Later, in 2017, a tour guide heroically led his group down the East Taiheng Glasswalk in Hubeiin only to have the glass tiles under his feet begin to creak and crack, a terrifying moment caught on video by China’s CGTN. Luckily, the incident was nothing more than a “special feature” built into the glass by the designers to shock visitors. Sensors on the walkway detected pedestrian activity nearby and triggered visual/sound effects accordingly. Unfortunately, many people (including the tour guide himself) failed to see the humor of the prank.

Windows to the Future

Eventually, the Hongyagu Glass Bridge will also offer the world’s highest bungee jump — something that’s expected to draw in daredevils from all over the world. Also on the horizon are fashion shows, which will see models strolling down the transparent walkways and showcase the 66-story drop beneath their feet.