Imagine being abducted by aliens in the middle of the night, beaming up into the strange monochromatic interiors of a colossal spaceship. You’re placed on a bench within a spherical pod, fearing the worst – but there’s no probe. Here, there’s only high-end skin care. You’re wrapped in a warm towel, a pleasant-smelling unguent smeared onto your face. Wait a minute. This isn’t an alien spaceship at all! You’re actually at a new spa called Formoral in Hangzhou, China, designed by lialawlab. 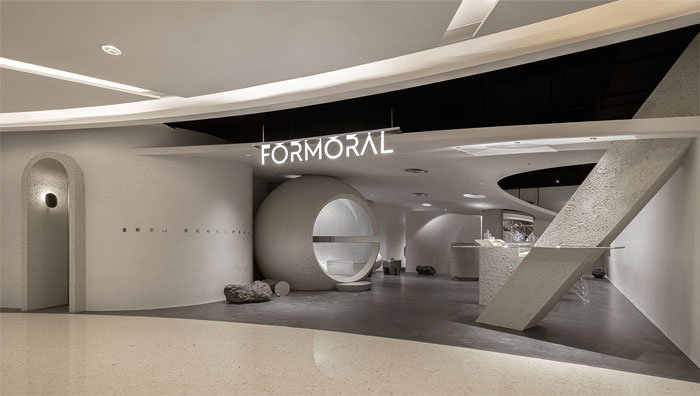 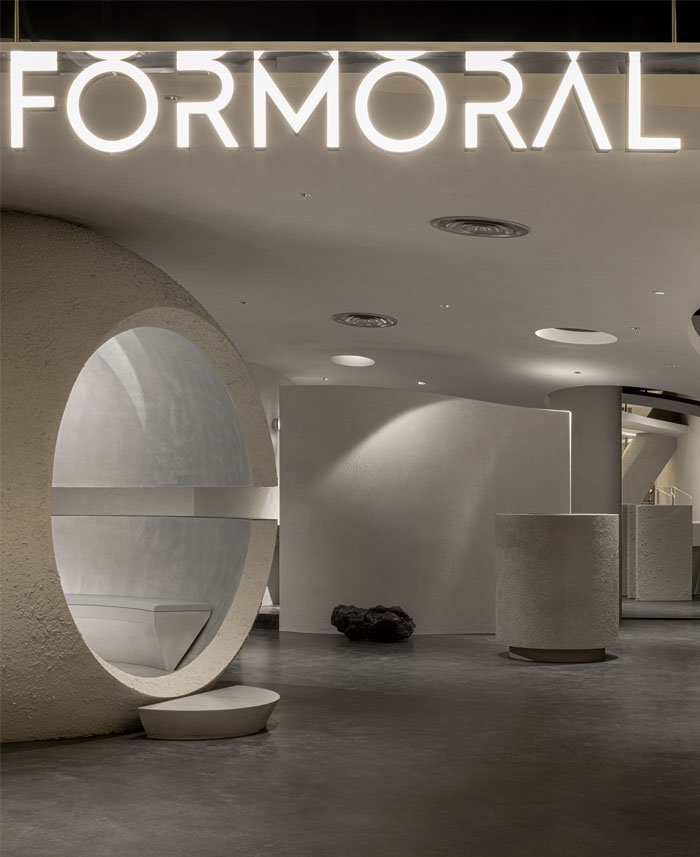 While technically located on Earth, these interiors are truly out of this world. If they remind you of 70s sci-fi films like the original Star Wars trilogy, that’s because the designers took inspiration from pop culture retro-futurism for the concept, updating the aesthetics for the 21st century. More specifically, the lialawlab team envisioned the space as a “series of spatial scenes” that set the mood for customers entering Formoral, the flagship location of an independent skin care brand emphasizing medical science and the fusion of nature and technology. 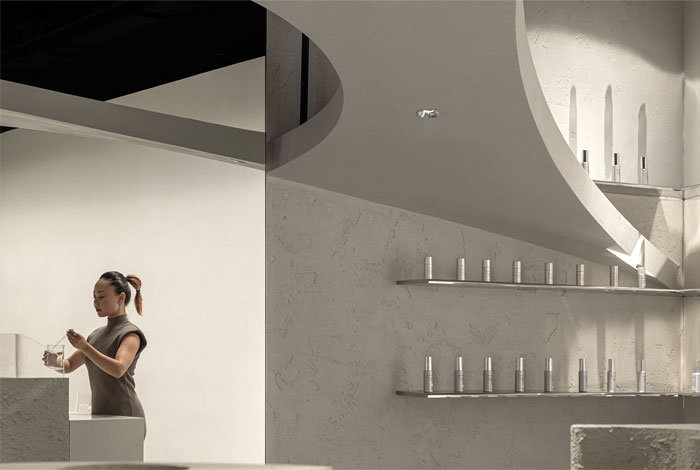 The space is designed so visitors feel like they’re exploring a laboratory on a primitive “desert planet.” Instead of presenting their products in an ordinary retail setting, Formoral wanted the store to be more of an experience that tells the story of their brand. Sculptural elements are layered upon each other, like slices through the ceiling embedded with LED lighting, diagonal planes that break up the vertical space, and arched doorways leading into treatment rooms. To create this effect, the designers used a combination of smooth surfaces and textural gray paint evoking a meeting of organic and artificial materials. 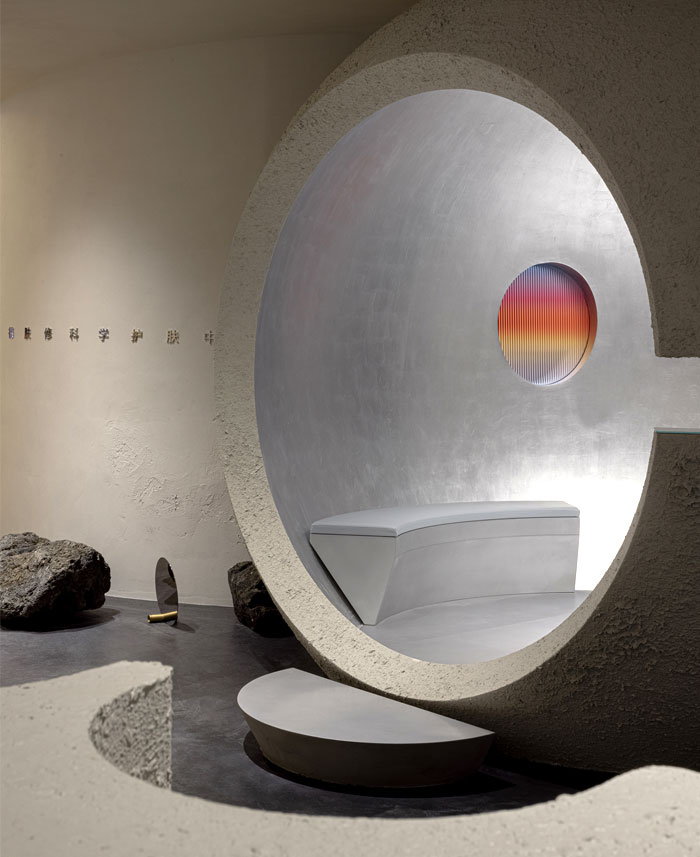 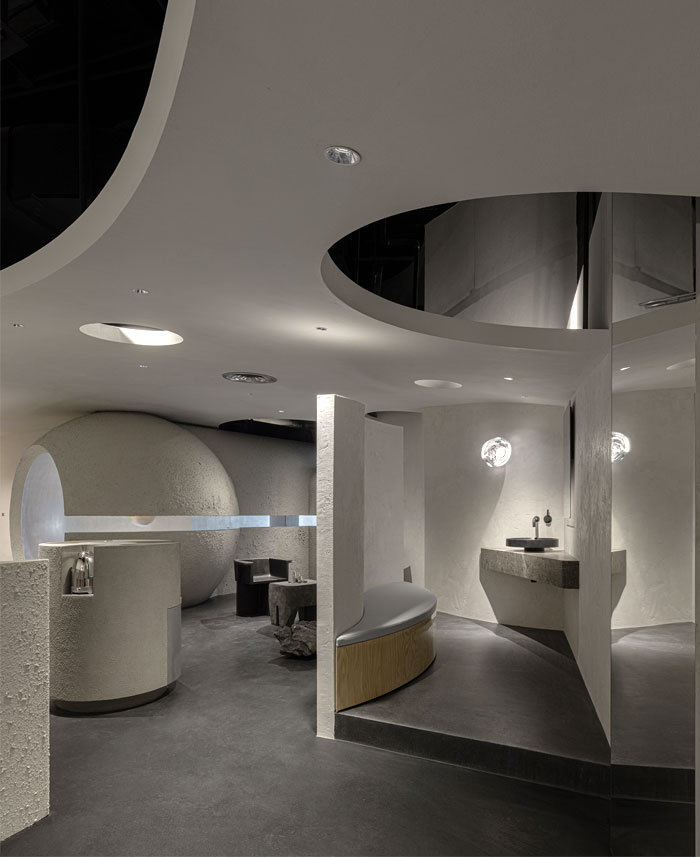 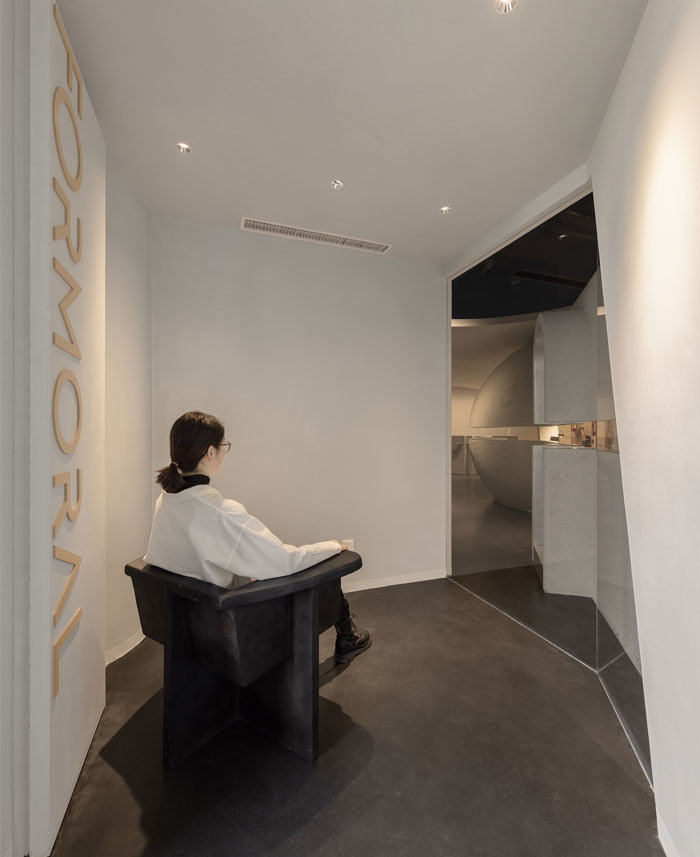 The arc shape seen throughout the space is a unifying design element that repeats in various forms and sizes. The largest, with a radius of nearly 100 feet, makes up the entire roof. Delineating different functional areas with these rounded and undulating shapes makes the 1300-square-foot space seem much larger than it really is. 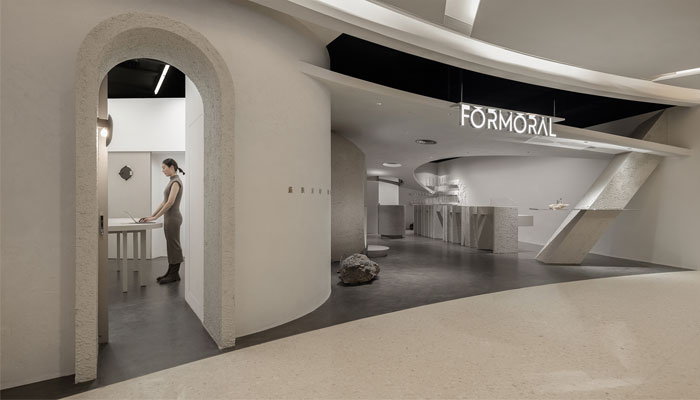 The lialawlab team explains that: “A rising ‘planet,’ a futuristic tunnel clad with matte silver foil and aluminum plates, and two cabin doors along the tunnel tie together the eight functions, including brand display, skin testing and product selling, rest and communication, events and demonstration, self care and washing, office space, product storage, and a break room for employees, while also helping denote the ‘inside’ and ‘outside’ and define the public and private realms.”

“To trigger people’s desire to explore the space, [we] carved out a 200 millimeter-wide gap at the height of 1.25 meters of the massive sphere and the tunnel. The gap is complemented with mirrored material, allowing customers to stay, wonder, stare, and rest. It also offers a visual continuity so that the staff can better serve customers.” 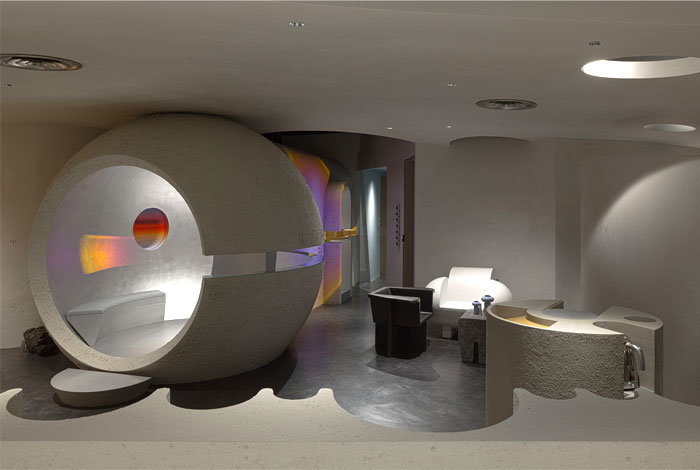 The skin care center is set within a shopping mall, which makes it even more of a marvel. Who doesn’t wish they could escape to another planet sometimes? Lialawlab’s design has been so well-received so far, it’s even been nominated for a 2021 World Interiors News Award in the “Independent Shops or Small Chains” category.