Things might look a little different this Halloween as COVID-19 continues to plague the country, but one New York homeowner is making sure it that won’t be a holiday to forget. 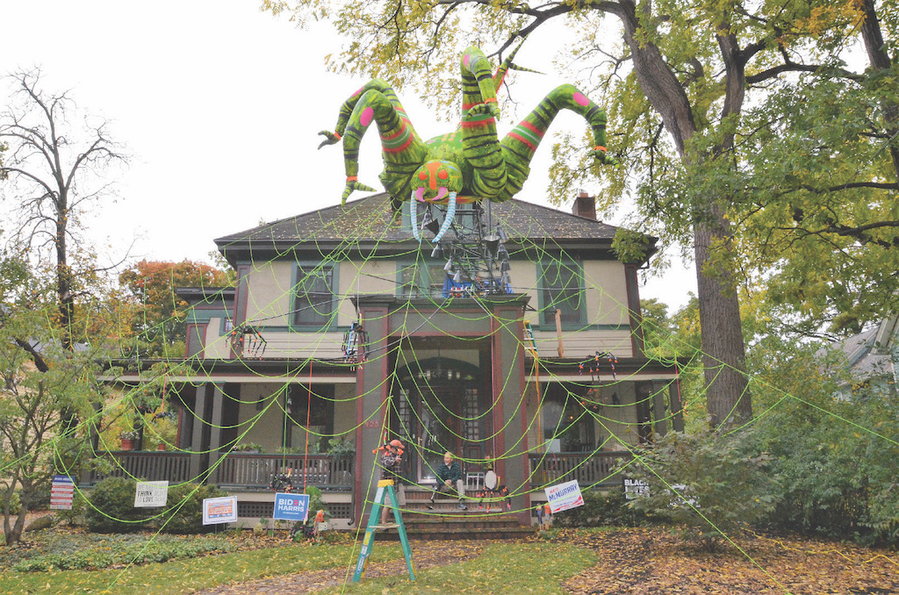 David Moomaw of East Aurora decided to take on the role of Dr. Frankenstein this year, giving life to a monstrous robotic spider that descends a gigantic web from its perch on the third story of his home, all the way down to the lawn. After unveiling his disturbing delight to town residents on September 30th, news of the colossal creation quickly spread around the globe via TikTok. The original post has already garnered 10.4 million views. 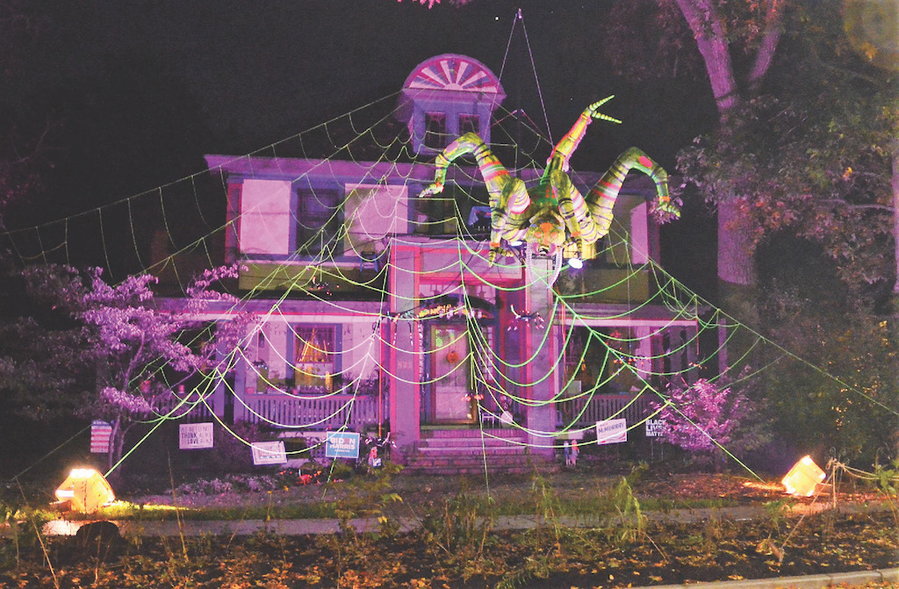 Moomaw, a mechanical engineer and retired toy designer for Fisher-Price, constructed his eight-legged fright using an inflatable spider and an electric motor. The entire creature spans roughly 10 feet in diameter and dangles 35 feet off the ground from a metal crane attached to the roof of his home’s front porch. The legs have been rigged to move independently, too, providing an eerily realistic vision of a leviathan stalking its prey. The entire journey takes about 30 seconds from beginning to end, before the beast winds back up to start all over again.

The designer’s pieced-together behemoth is almost completely homemade. He sewed the fabric body, painted it, and engineered the pulleys and wires that facilitate its movement. He also built the crane that holds up the creepy critter, and a few baby spiders to drop down behind it. Moomaw even strategically placed 1,500-watt lights under his green giant. “Everything glows in the dark,” he said in an interview with the East Aurora Advertiser.

“It’s his COVID project,” says his wife, Ellen. Moomaw responds that “I think she’s a little nervous about what I’ll come up with next now that I’m retired. I don’t handle boredom well.” 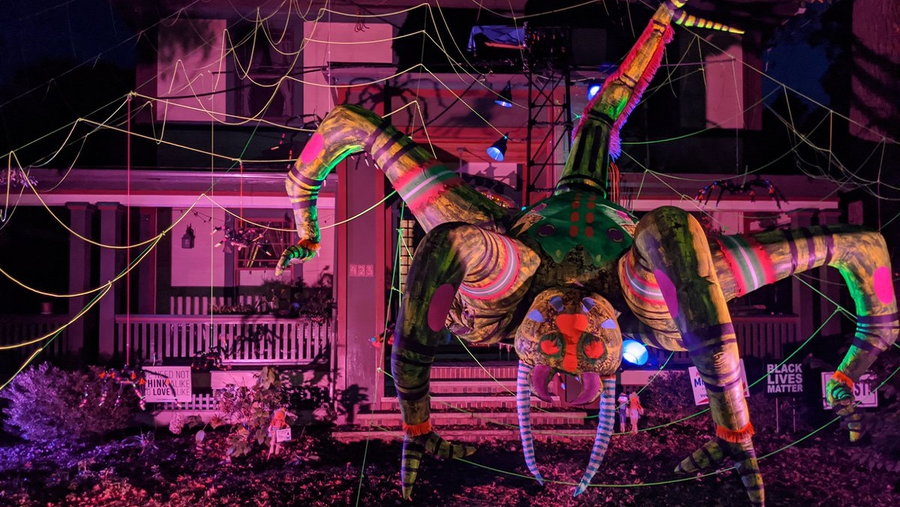 That boredom has clearly translated into both a trick and a treat for the surrounding inhabitants. A neighbor who posted photos on Twitter reports that local children are begging to visit the spectacle every night. Other parents with kids just drive by, honking their approval and flashing thumbs up signs.

Moomaw plans to operate his sneaky, spooky spider every afternoon through Halloween.

Another East Aurora neighbor, Joe Dubois, has also decked out his yard with ghoulish fiends, including an enormous (albeit stationary) tarantula. His inspiration probably echoes Moomaw’s thoughts. “So much has been taken away from kids already this year,” Dubois told The Examiner. “I really want them to have a fun Halloween.” 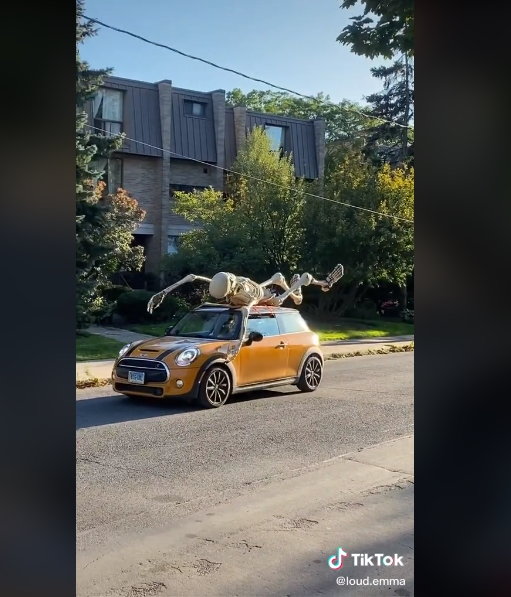 This spider sensation also joins the ranks of other viral Halloween trends this year, like a giant 12-foot-tall skeleton sold by Home Depot that became a social media hit when a TikTok video surfaced in September of one strapped to the top of a Mini Cooper with the caption “never send an emo on an errand.” Since then, the oversized bones have been showing up in scary scenes all over the internet. 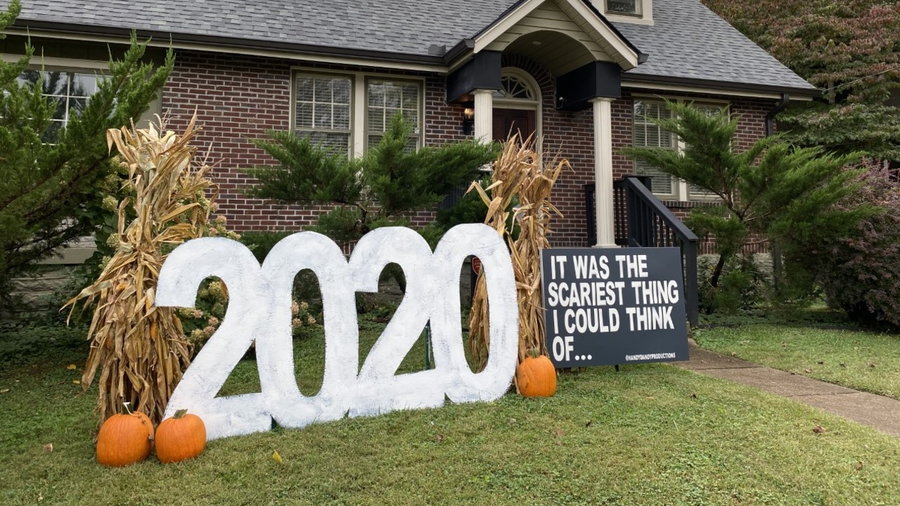 Elsewhere, Tennessee resident James Worsham came up with perhaps the most frightening decorations yet. His terrifying front lawn has been featured in news outlets and social platforms all over the country, featuring only a huge cutout of “2020” and a sign next to it saying, “It was the scariest thing I could think of…”