The cultural renaissance in Abu Dhabi continued last month with the opening of an Emirati extension of the Louvre. It took ten years and $712 million to construct, but the Louvre Abu Dhabi is now one of the most significant destinations for art lovers in the U.A.E. Designed by Jean Nouvel, the museum is not so much of a building as it is a collection of galleries, pavilions, lagoons, and plazas covered by a gigantic mashrabiya-inspired dome, which appears to float above the entire ensemble. Nouvel hopes that the Louvre Abu Dhabi will come to be seen as a serene oasis, a cultural neighborhood, and a “museum city.” In other words, a place for people to gather, mingle, and be enthused by art. 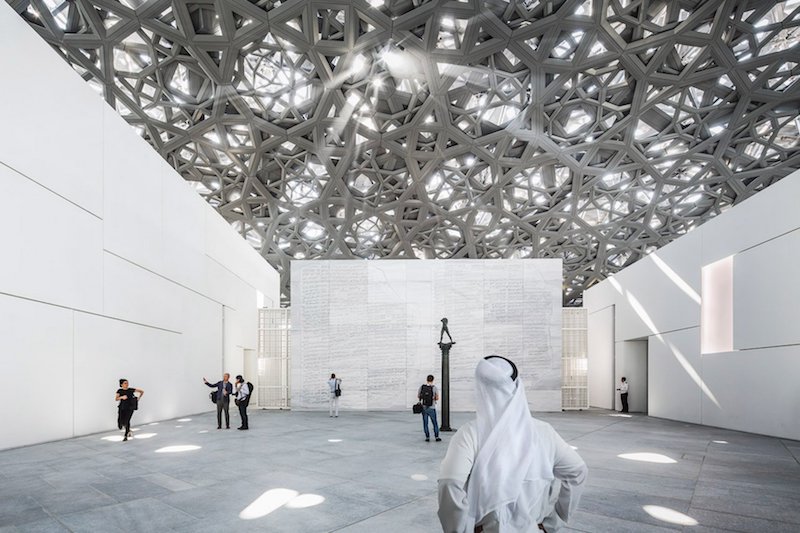 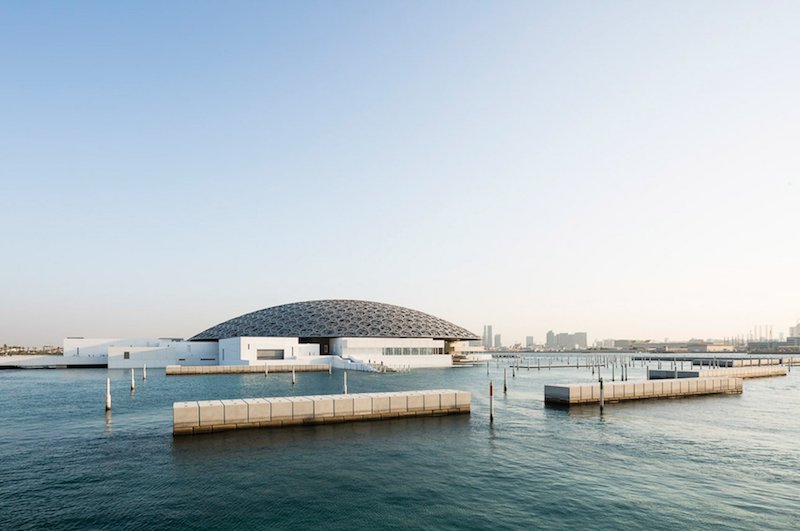 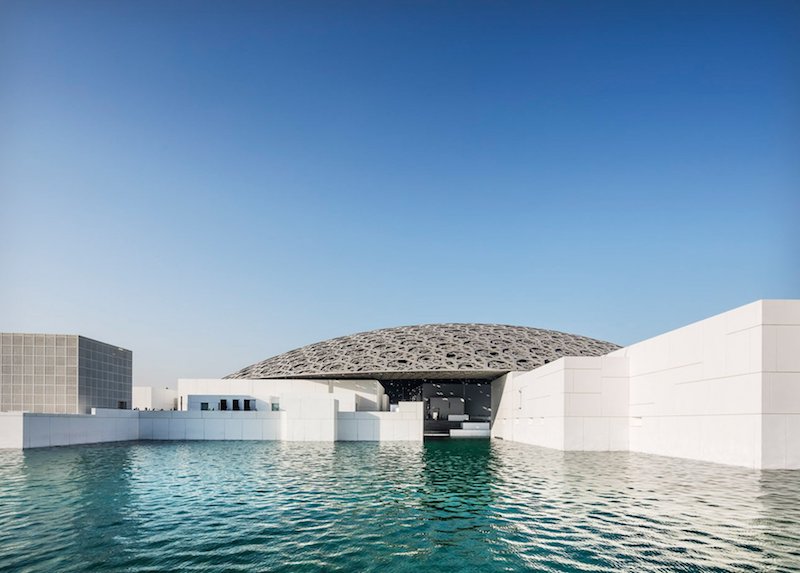 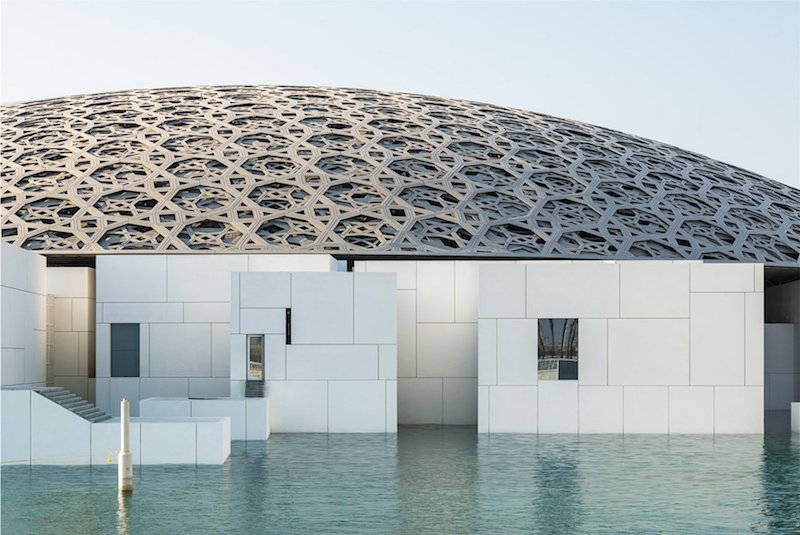 If the overall description of the Louvre Abu Dhabi and its floating dome seems surreal, then the perception of the whole project floating on water must seem miraculous. In reality, it’s grounded on Saadiyat Island, a man-made island. In one of many articles written on the project, Nouvel takes pleasure in the ambiguous location of the columns holding the dome in place almost 100 feet above the floor, cheekily asking the reporter if they could “find them.” The four supports span 360-feet sections of land and are hidden inside the pavilions. 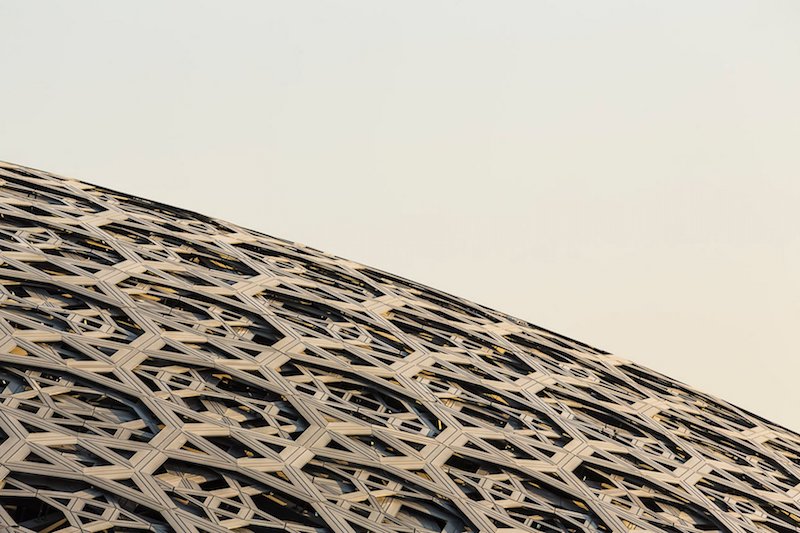 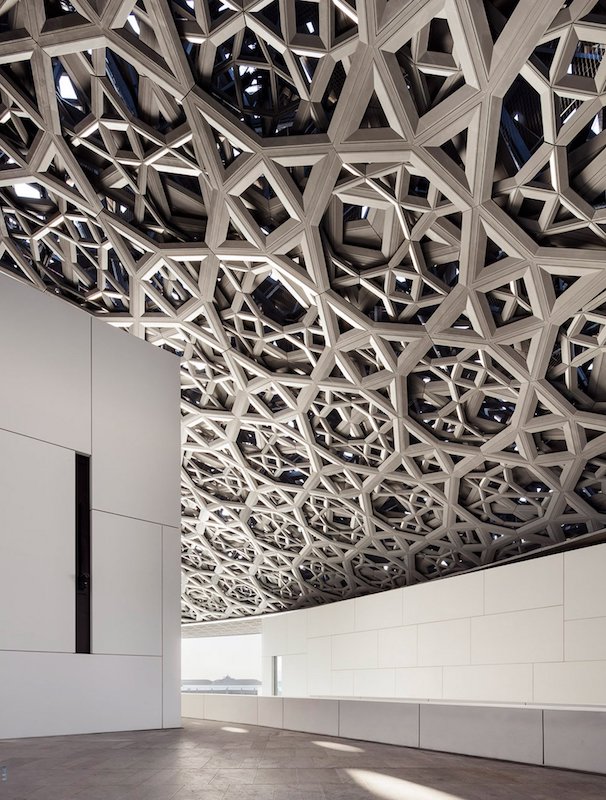 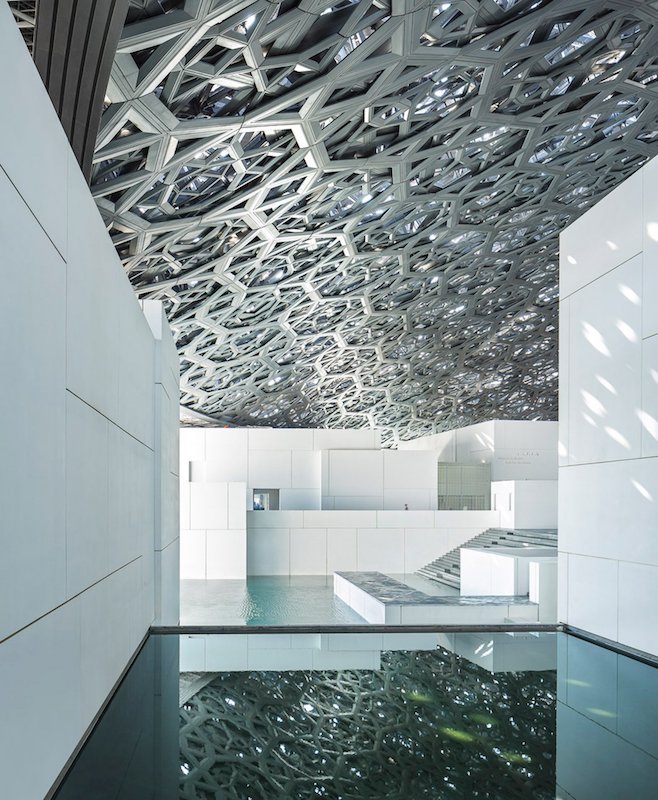 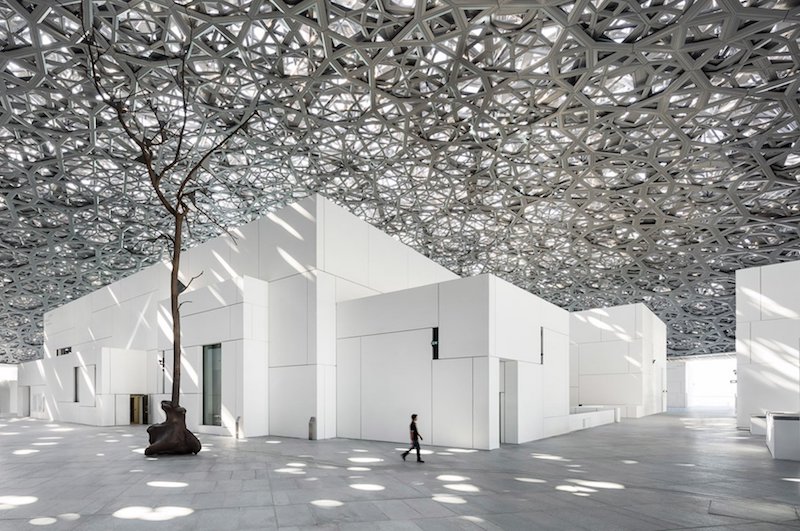 The dome has a diameter of 590 feet and weighs 7,500 tonnes. Its steel structure is an eight layered, 400,000 component, mashrabiya latticework made up of 7,850 unique interlocked stars, which allow natural light to pass through and illuminate the spaces below. The largest star is 43 feet wide. The lagoons around the plazas (or “Arabian agoras,” as Nouvel calls them) and the walls of the 23 galleries and 32 pavilions reflect this natural light, causing the underside of the dome to shimmer and giving the project a vibrancy that many other museums lack. The done’s irregular apertures bring the sun in and form spotlights over practically every surface. As both a shading device and ornamental cladding — referred to as “Rain of Light” by Nouvel — the dome makes the interior spaces 5 degrees cooler than the exterior.

In the exhibit spaces underneath the dome, 600 works of art sit on display, half of which are on loan from France. In a deal between Abu Dhabi and the Agence France-Muséums, a relatively new organization associated with France’s cultural institutions, the Parisian Louvre will lease its name to its Emirati location for the next 30 years. The spaces between the galleries and the pavilions feel more like seaside streets than corridors. Along with them, the lagoons give the museum city the ambiance of a medina. 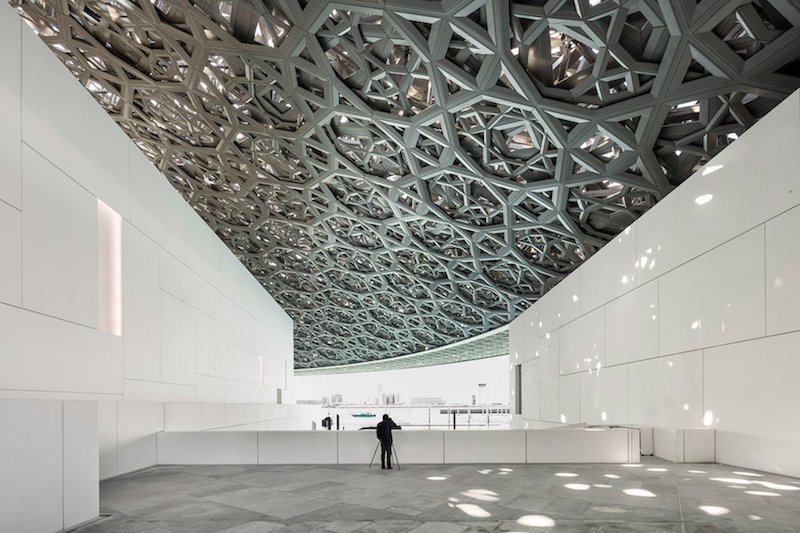 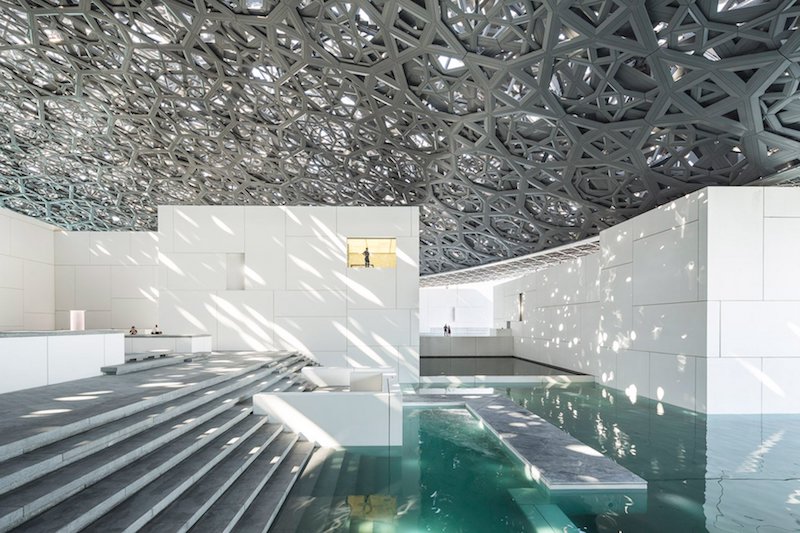 Nouvel’s vision for the Louvre Abu Dhabi was for it to be a meeting place, one where people of different backgrounds gather to view art that reflects all cultures. The works of art within the museum city argue that all the peoples of the Earth are related, because we can sometimes share histories and ways of doing things. Whether that is actually true or not requires a deeper discussion about cultural differences, homogeneity, and appropriation. What is true is that the Louvre Abu Dhabi is now on the art-enthusiast circuit. Under its big mashrabiya dome, all people, regardless of background, are made to feel welcome.