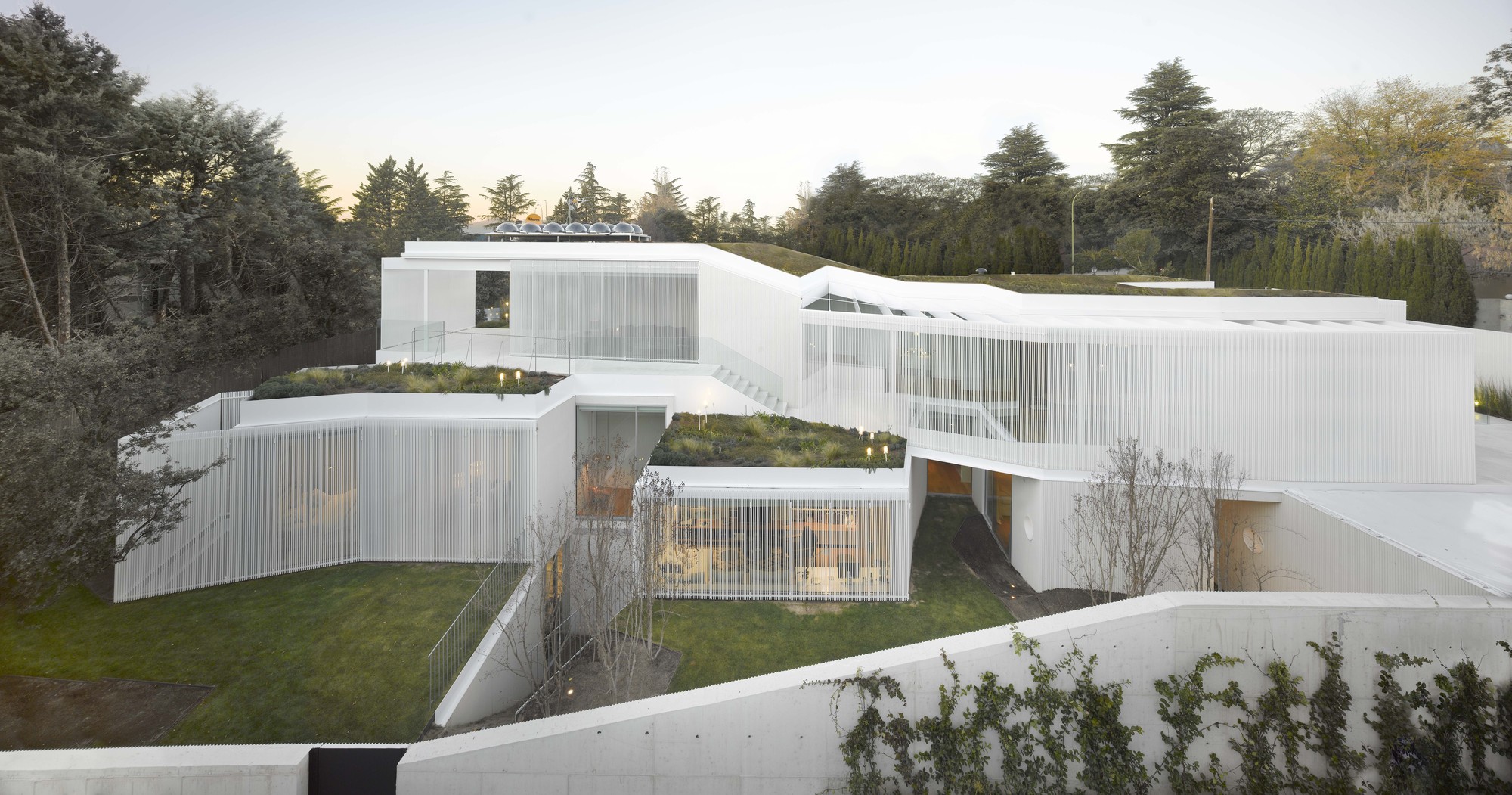 A series of glass boxes protected by retractible metal shutters blur the boundaries between indoors and out in this two-level home by Spanish firm Estudio Entresitio. Transparent volumes interact with voids and stark concrete walls to create a variety of irregularly shaped spaces characterized by strong diagonal and vertical lines. 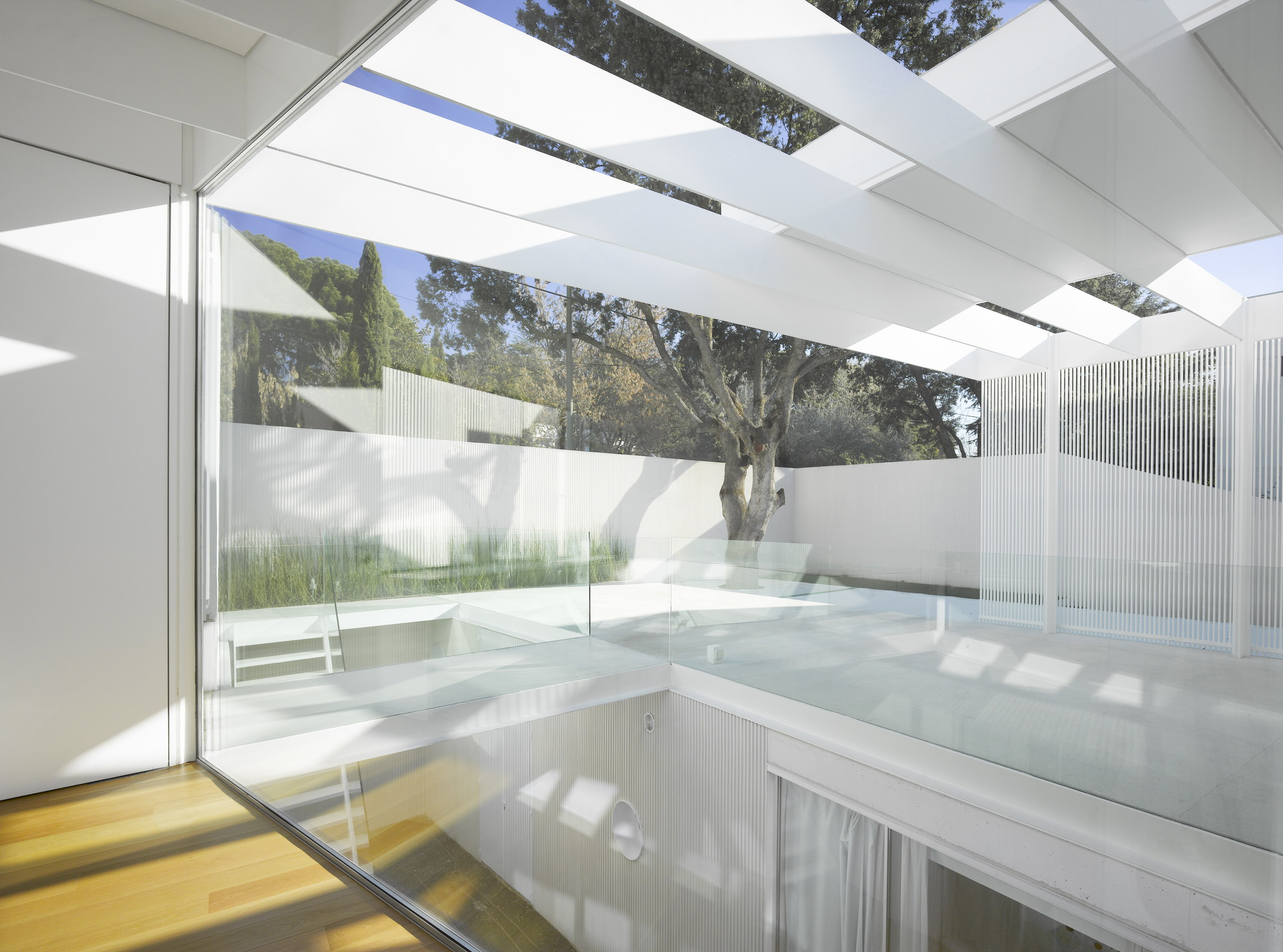 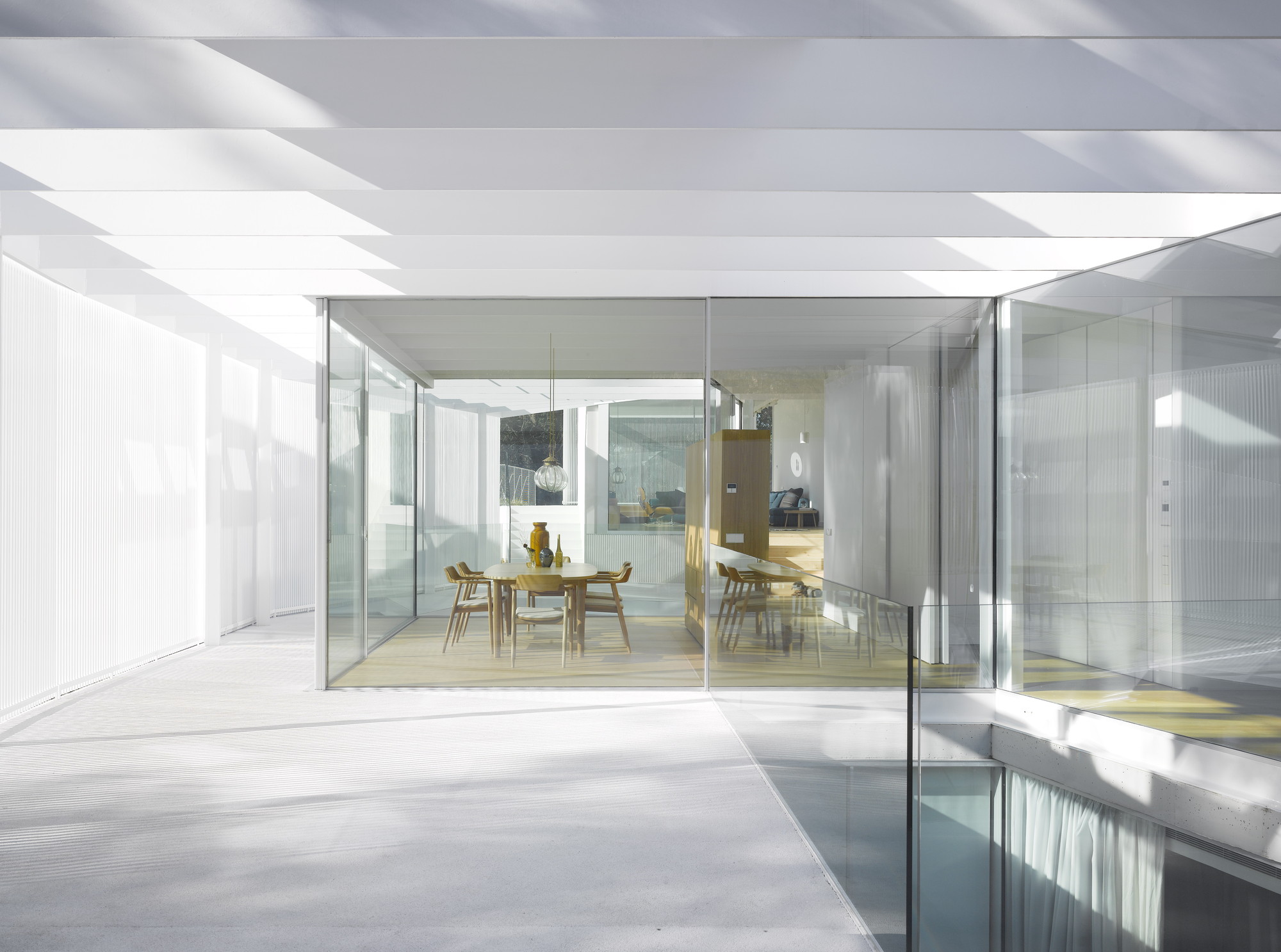 From the outside, it’s hard to tell where the interior of this glass house even begins, as the shutters are flush with the glass in some areas and separate from it in others, creating courtyards that have a sense of privacy, yet are open to the sky. These serve as sunlit circulation routes from one end of the home to the other.

Large operable glazed walls enable the indoor areas to be opened to the outdoor and transitional spaces, so the home can go from feeling cozy and warm to fresh and breezy within minutes. 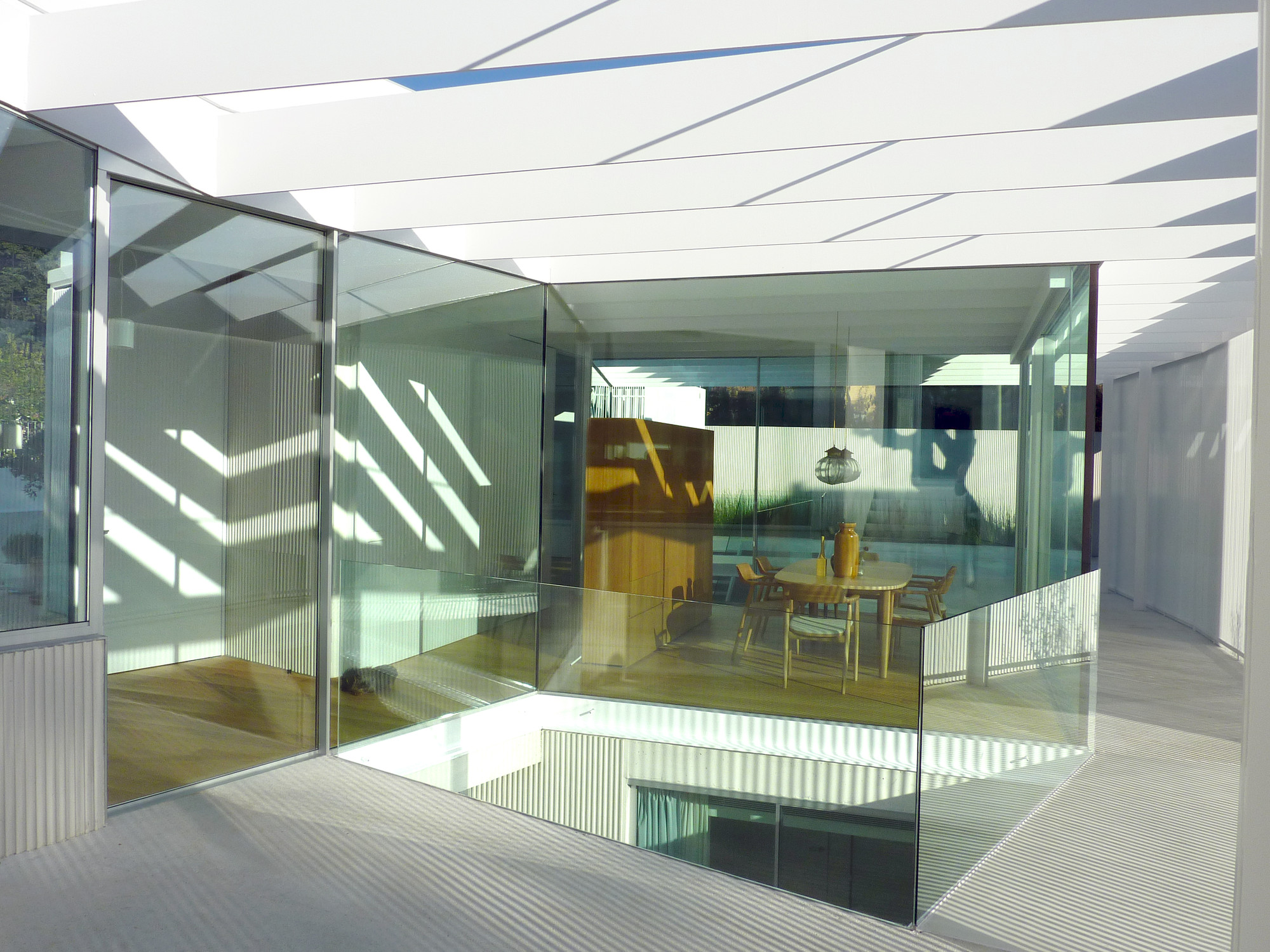 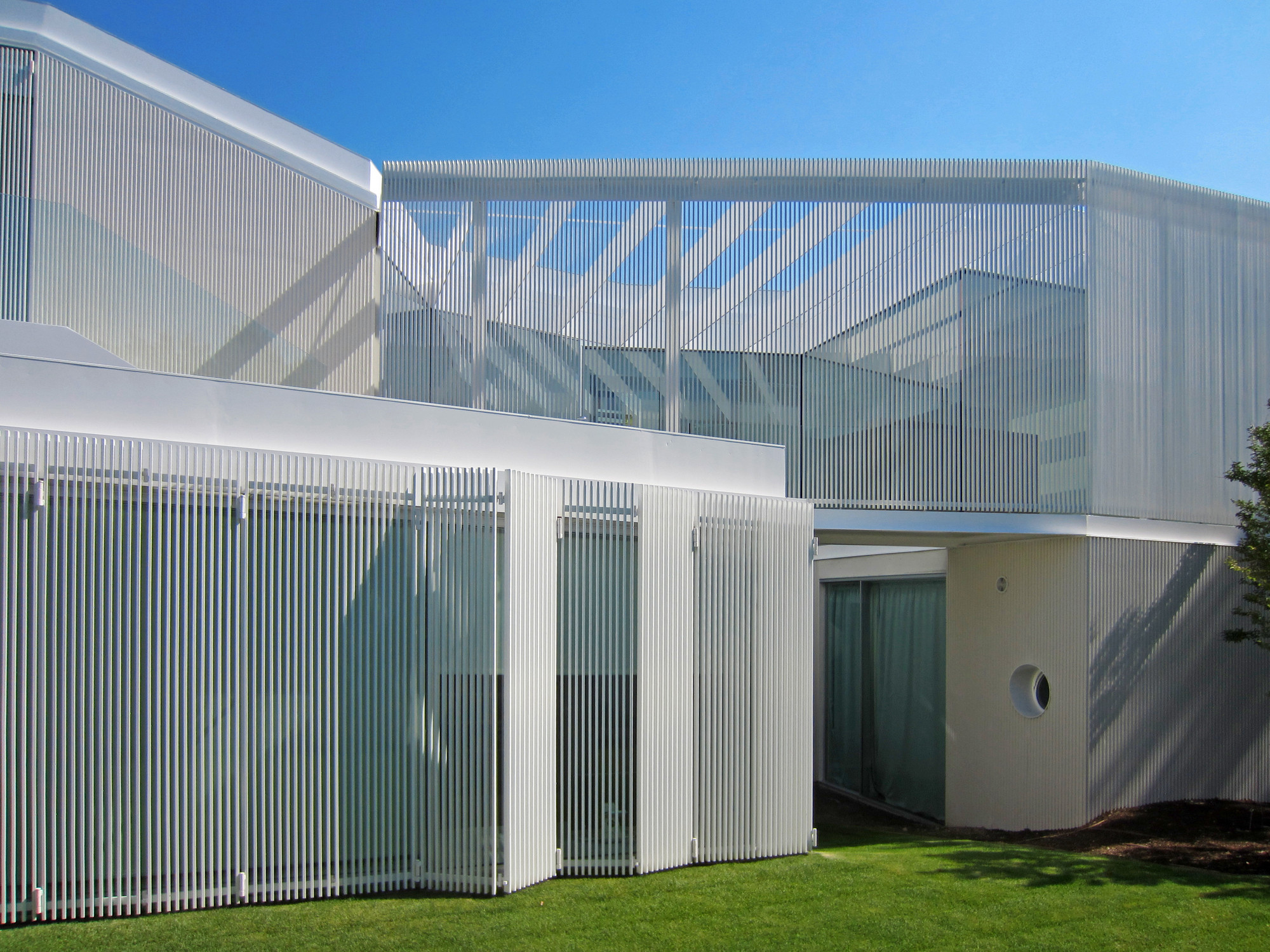 While the second floor of common areas is nearly all glass, forming one continuous curving volume, the bottom floor full of the sleeping areas is more fragmented, with the shady spaces between the rooms feeling like protective caves.

“Two different schemes superimposed one on top the other; a longitudinal one, based on spatial forking, and the one underneath, based on a hand fingers like configuration. As a result, it is a fractured mass, ruled by the rhythm of the roof structure. Some other important things are the growth against the slope, entrance through the umbilicus and permeable skins that thicken space boundaries.”

“Upper level is a daytime pavilion with a metal roof structure that goes all the way through in visual continuity, with long views through a sequence of spaces. Concrete supporting walls and glass enclosure are the other two vertical elements, blurring the idea of interior and exterior. Rooms below are burrow like, with nested openings in between them.”