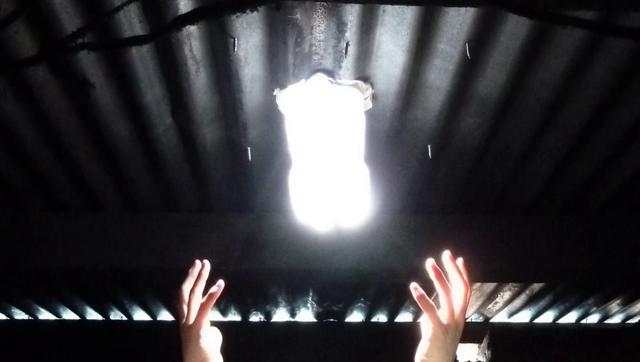 Who says you can’t bottle (and distribute) genius? Developed in Brazil to address under-illuminated slums, this simple design idea for a DIY solar lamp has been adopted by MIT students and expanded to other developing areas where many low-income homes lack access to either daylight or electricity.

The physics of the concept are straightforward: the bottles are placed in roofs – half outside, half inside – and their lower portions refract light like 60-Watt light bulb but without the need for a power source. A few drops of bleach serve to keep the water clear, clean and germ-free for years to come.

In total, one of these do-it-yourself lights takes maybe an hour to install, cutting an appropriate hole, inserting a bleached-water-filled bottle, and resealing around the resulting gap. Even where clean water is rare, a little can generally be spared for a half-decade of lighting.

We take for granted our electric lights, windows and skylights to access the sun’s glow, but for those living in close-together shacks with corrugated-metal roofs, a stray ray is welcome, and something that can spread light to the darkest interior corners can be a dream come true.

Want to make your own? Check out these instructions from Matter of Trust:

“A solar bottle light bulb, an innovation introduced in the Philippines by Illac Diaz of MyShelter Foundation, as a cheap alternative to other light sources. It was an ingenious invention by an engineer in Brazil. It is called “bottle bulb” because it is made of an empty 1.5 liter soda bottle and in it is a liquid bleach and purified water that can be used as an alternative electric powered light bulb. However, it is only useful during daytime but its luminance was tested and shown to produce as much light as a 50W incandescent bulb.

How to make your own Solar Bottle Light Bulb?

Get the rest of the tutorial here.