A new restaurant interior in Bangkok makes the argument that rattan is criminally underused as an architectural material. Spice & Barley features stunning sculptural rattan installations that flow up to the ceiling from the ground, looking like columns of smoke collecting into a cloud overhead. The effect is dazzling and full of drama, heightened by the use of an all-glass exterior wall to make it visible from outside. 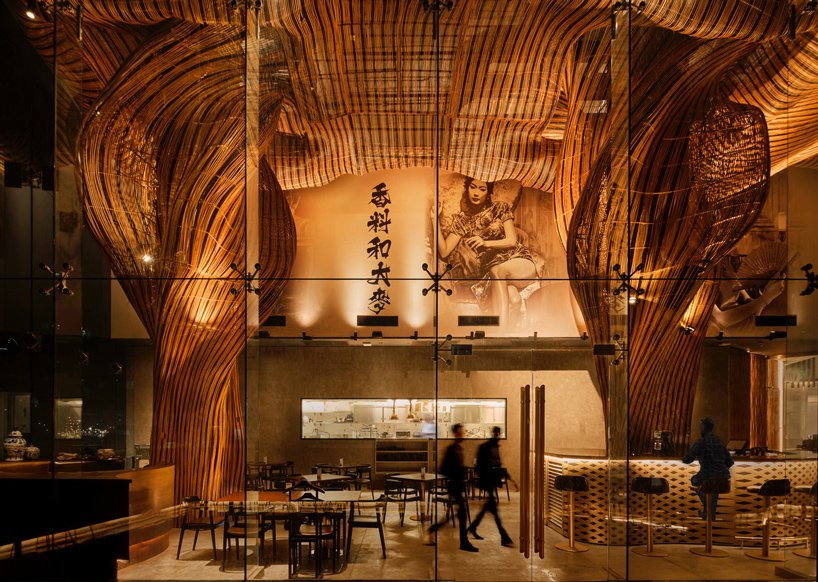 Created by Enter Projects, an architecture studio led by design director Patrick Keane, the concept comes with a backstory. The design team took inspiration from a tale about three sisters, May, Zaza, and Fei, whose larger-than-life images can be seen emblazoned on the rear wall. As the story goes, May and Zaza led glamorous lives traveling the world while Fei remained in Sichuan, China developing extraordinary culinary skills in the local cuisine. When the three girls came back together, they founded this restaurant overlooking its kitchen garden, combining all three international influences into one.

The rattan itself is crafted by local Thai artisans in a traditional process similar to basket weaving. Lightweight and flexible, it’s easy to mold into organic shapes. The effect might be artistic, but the columns and ceiling installation are functional, too, disguising elements like ductwork and beer pipes. The golden swirls are meant to mimic the look of beer as it’s poured into a glass, paying tribute to Spice & Barley’s origins as a destination for Belgian craft brews. 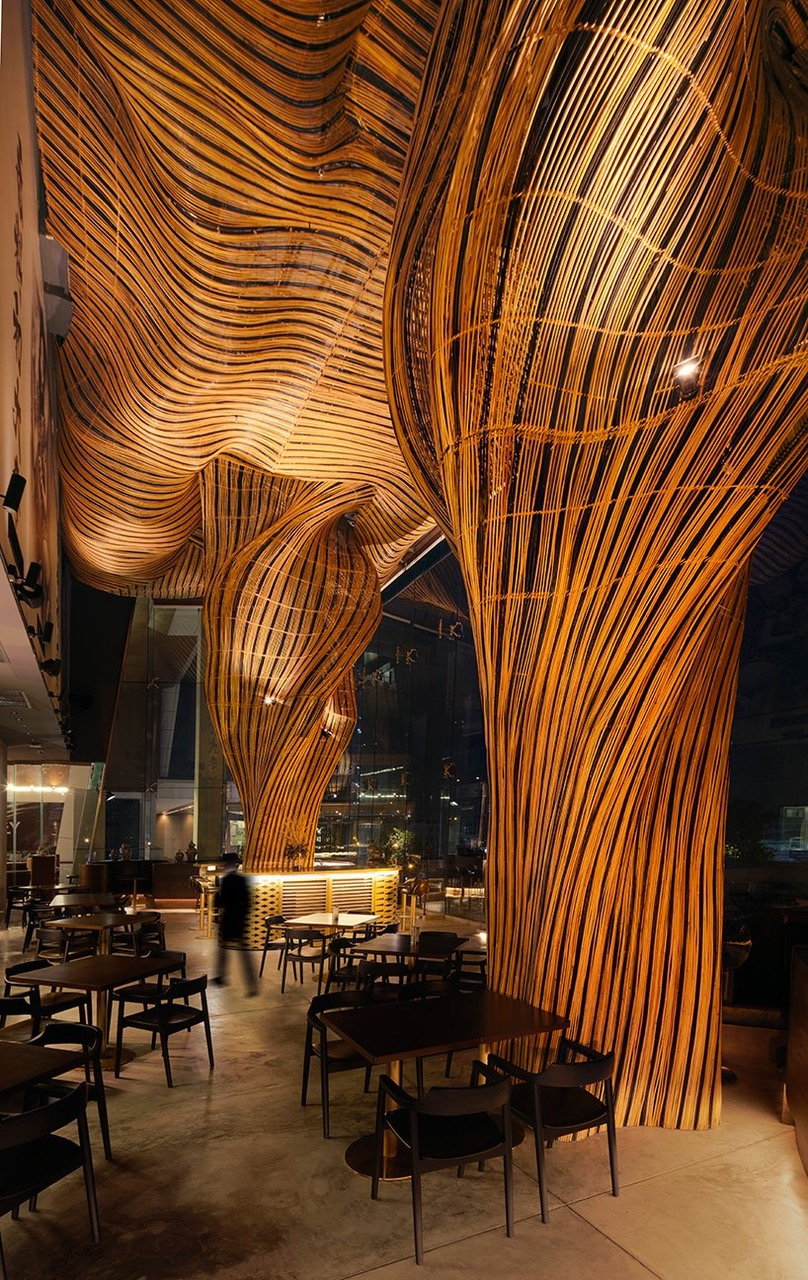 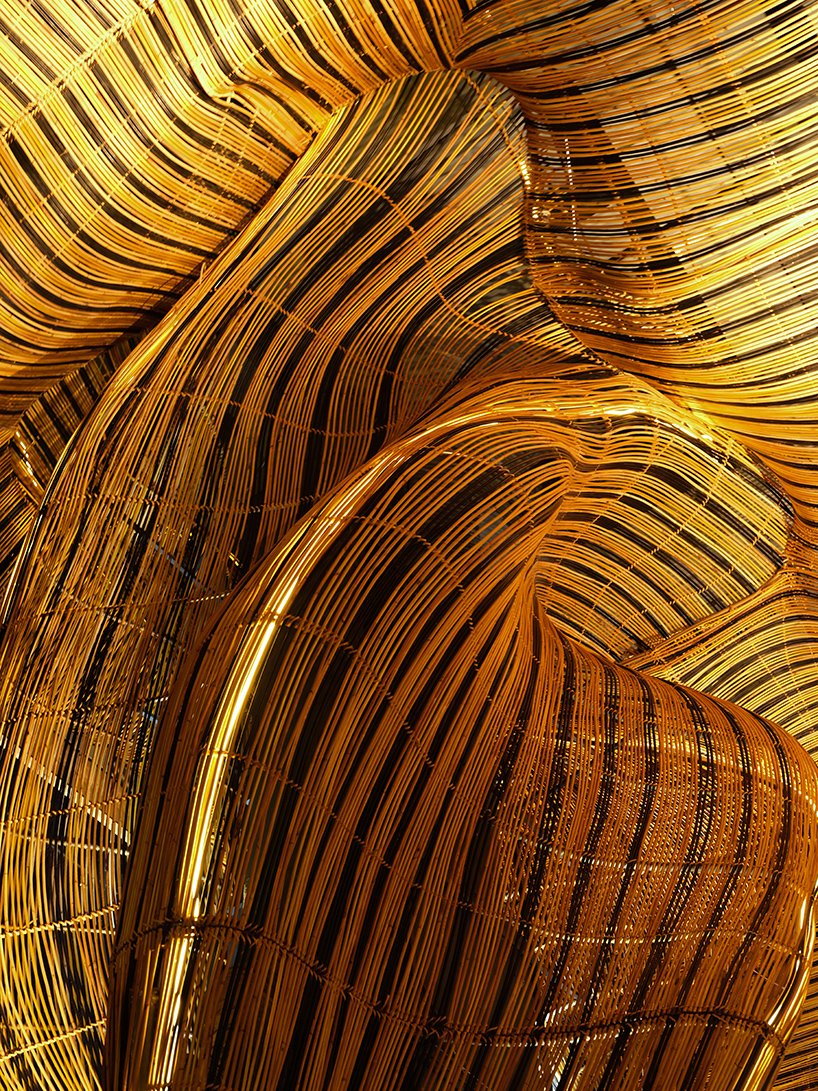 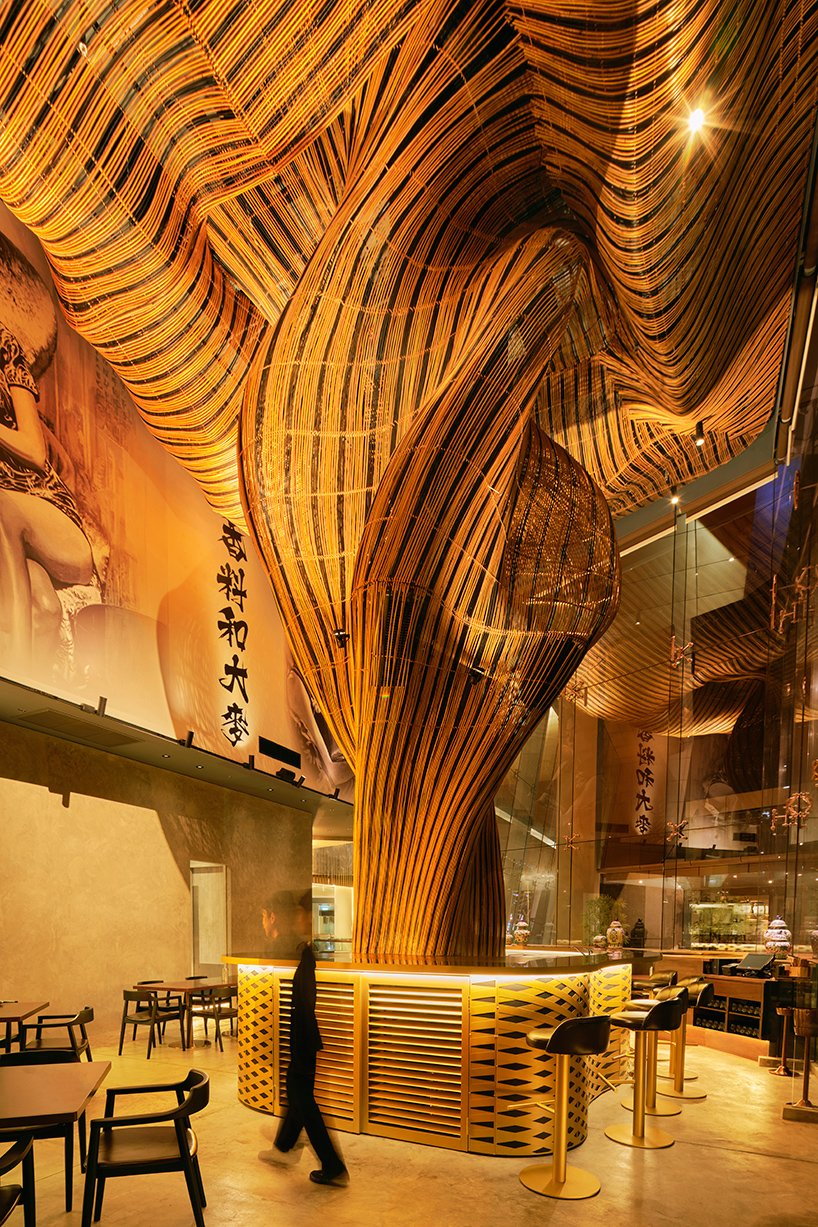 Keane, who’s from Australia, is a big advocate for creative use of rattan, itself a naturally renewable material sourced from a particular type of palm. Back when his firm was based in Sydney and Perth, he rendered his signature parametric shapes using materials like marine plywood. Then he expanded his firm to Bangkok and drew from local architectural styles and traditions.

Enter Projects recently launched “Project Rattan,” which shines a light on the unique skillset of artisans and craftspeople and advocates for their use in modern design. The bespoke architectural design for Spice & Barley is part of this project, and the partnership also produces furniture, lighting installations, and rattan screens. Each item is digitally designed and then produced by hand. 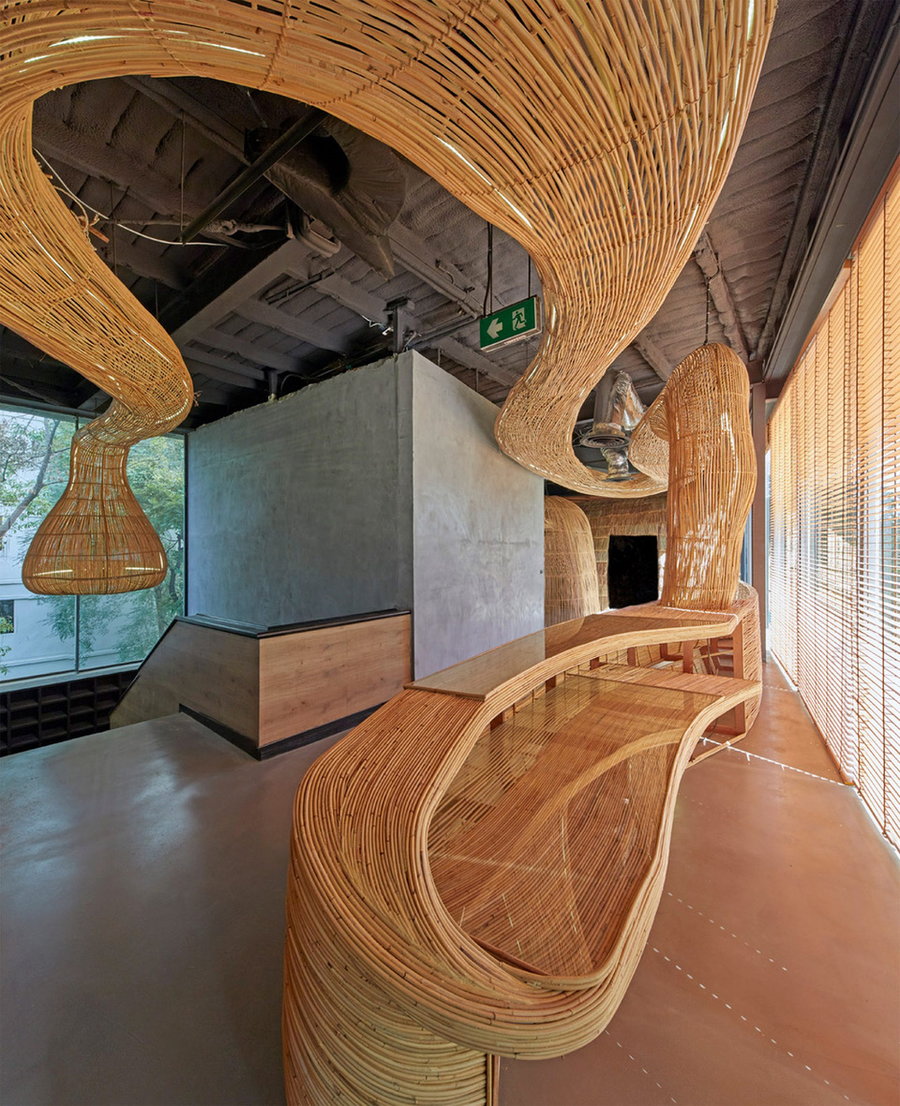 A few months ago, Enter Projects completed a similar interior installation for the headquarters of Bangkok-based yoga brand Vikasa, using rattan to create private practice pods as well as counters and benches.

The company describes itself as “sitting at the forefront of technologically aided design,” adding that they “seek to further the culture of architecture in this country and overseas, producing projects of diverse scales with exceptionally high design integrity and material finish. By using cutting-edge software to generate new and exciting building forms, we are able to create architecture that is dynamic, expressive, and always engaged with its social and local environment.” 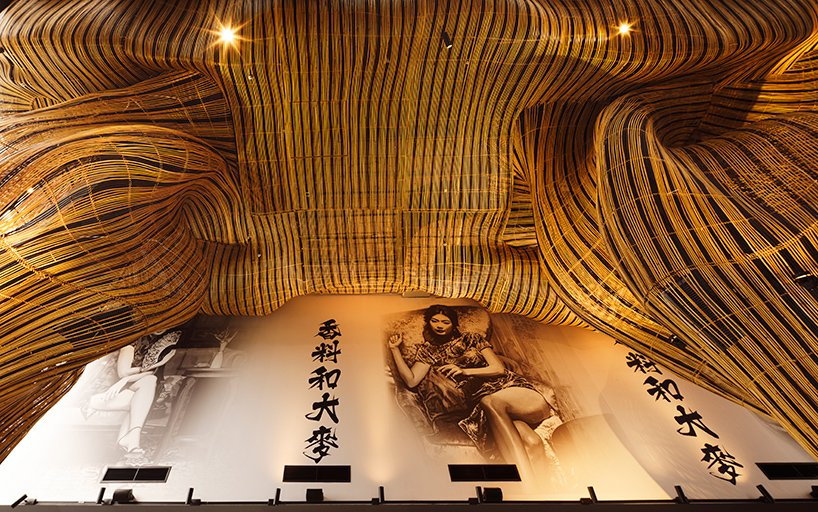 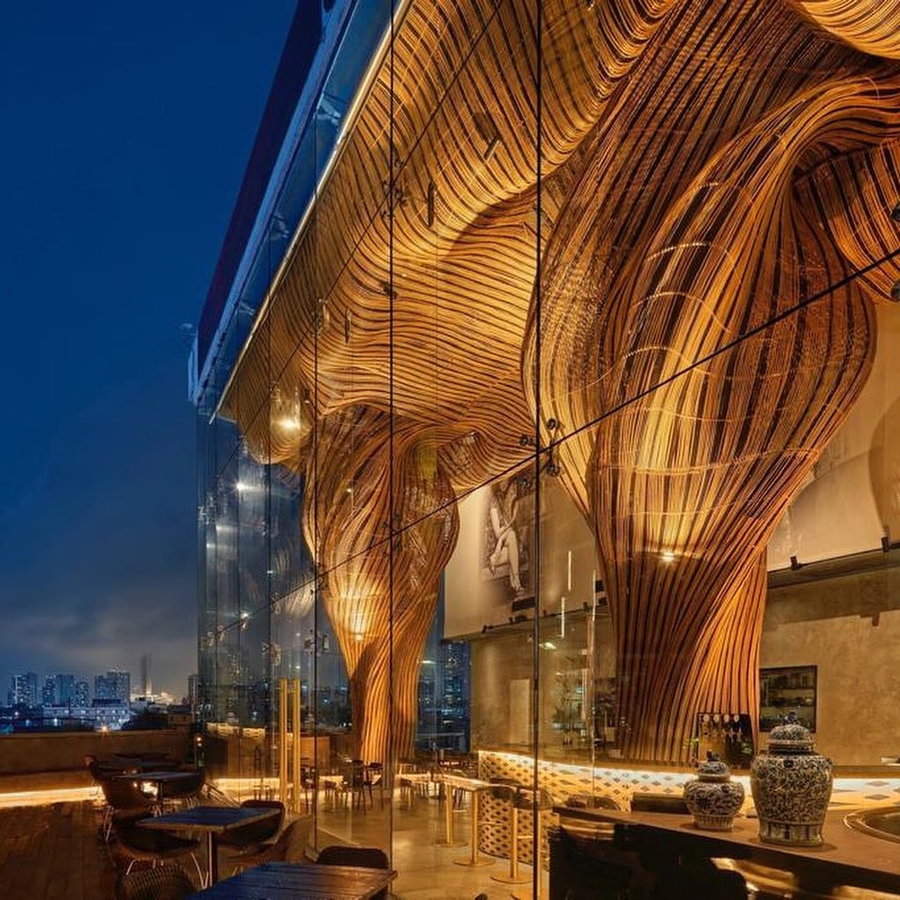 “Enter Projects strongly believes in the need to continuously investigate and develop our design philosophies by placing a high emphasis on sketches, physical models, and 3D investigations. This allows for the design process of each individual project to collectively and continually evolve and grow our understanding and explorations of space and form.”