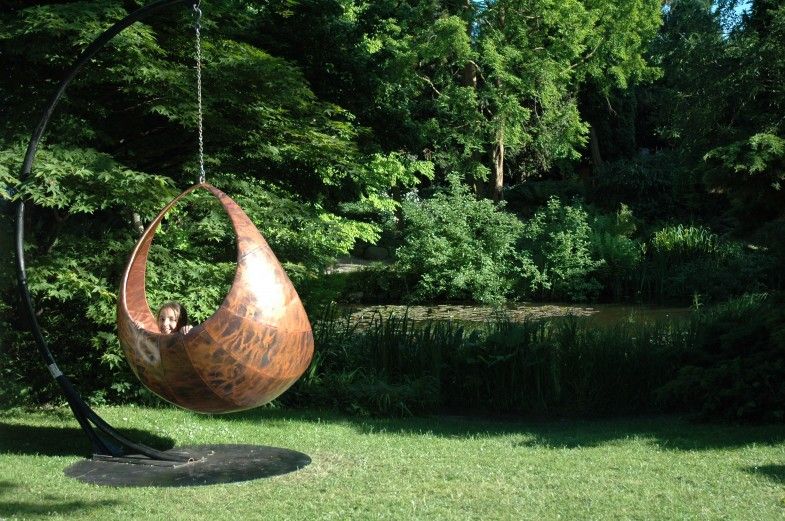 Myburgh Designs‘ Mood Swing collection features opulent and majestic waxed copper seats, for both indoor and outdoor use. So, curl up and read a book; or lie back, close your eyes and gently swing yourself into a reverie. Whether it’s in a hammock or a swing seat, there’s something so reassuring and soothing about a rocking motion. And let’s just be honest here, who wouldn’t happily bring back their inner baby via a Mood Swing? 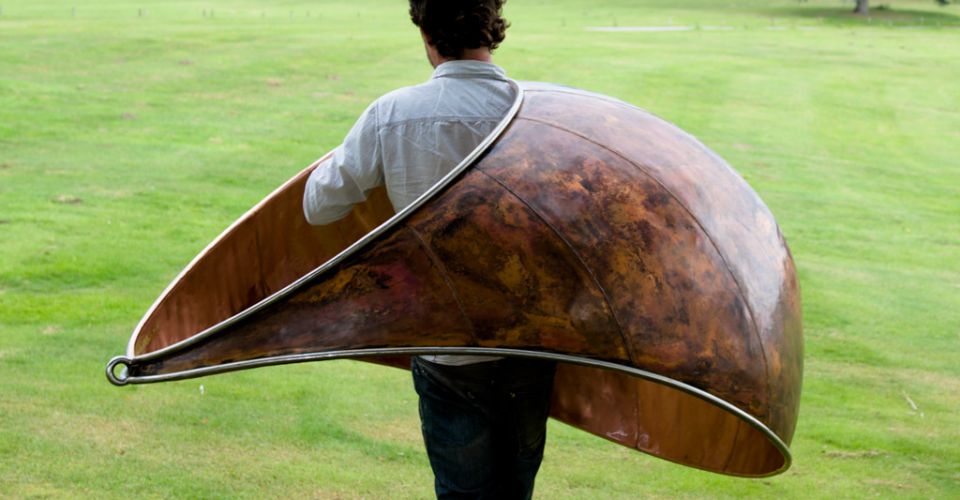 Continue reading below
Our Featured Videos
“I want to contribute to a new era in which environment, art and design converge to lay the corner stones for the very bright future that I see ahead of us,” said sculptor Stephen Myburgh.

The Mood Swing collection has been broadcast several times on TV in the UK. And metal sculptor Stephen Myburgh is no stranger to promoting himself on TV either; in August 2011, he appeared on “Dragon’s Den,” a TV show on BBC,to present his majestic Mood Swing copper swing seats for possible investment.
“Give me a chance I’ll make magic products that the world will buy, I promise you,” said South African-born Myburgh on the show, but unfortunately, the “dragons” just weren’t convinced.
For them, it was all about the bottom line, and retailing at around £5K ($7.5K at that time), they believed the swings were luxury items not worth their personal time and investment. The fact that the princess of Liechtenstein was a customer cut no ice—presumably this proved to them it was a niche item. 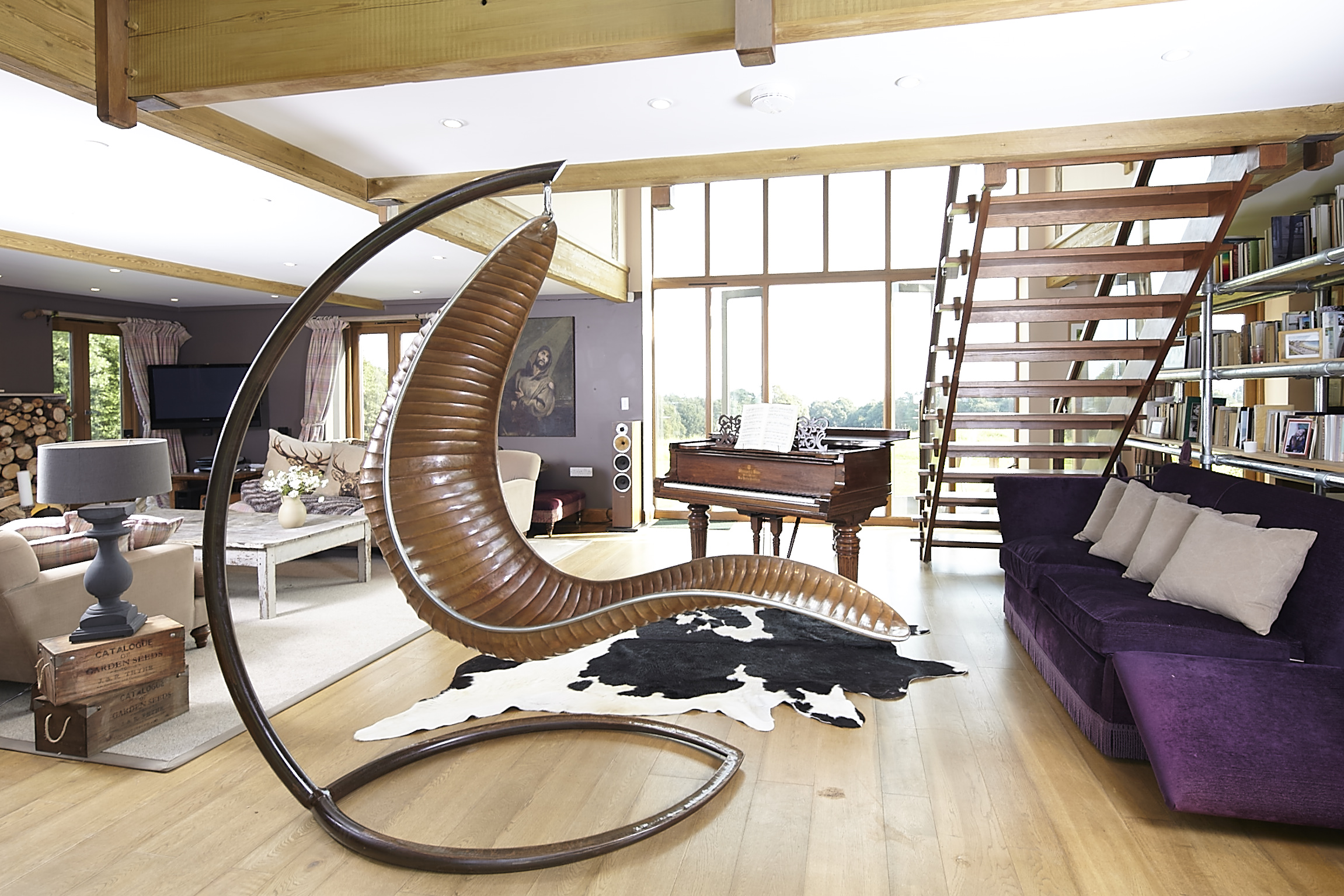 Lucky for us, Myburgh was happy to disagree. His artistry and expertise is irrepressible, and the Mood Swing’s days on UK telly were not over. ITV’s “Love Your Garden,” shown in June 2015 featured the swings, both inside and outside, as part of an inspirational garden furniture feature. Other pieces of copper furniture have gone on to internet fame. 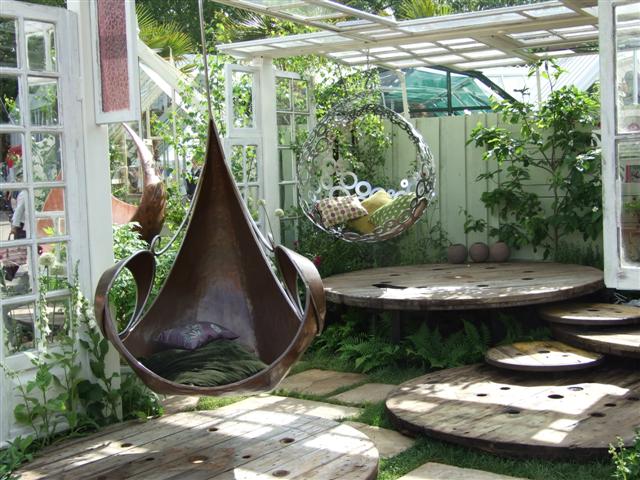 And if it’s inspiration you’re after, British inspirational retail expert and TV shopping guru Mary Portas was seen swinging on Ostara in her Channel 4 “Mary Portas: Personal Shopper” series. Given that Portas is considered to be an influential guide to what to buy, (she also heads up Channel 4’s TV series “What Britain Buys”) this was some coup for Myburgh and his swings. 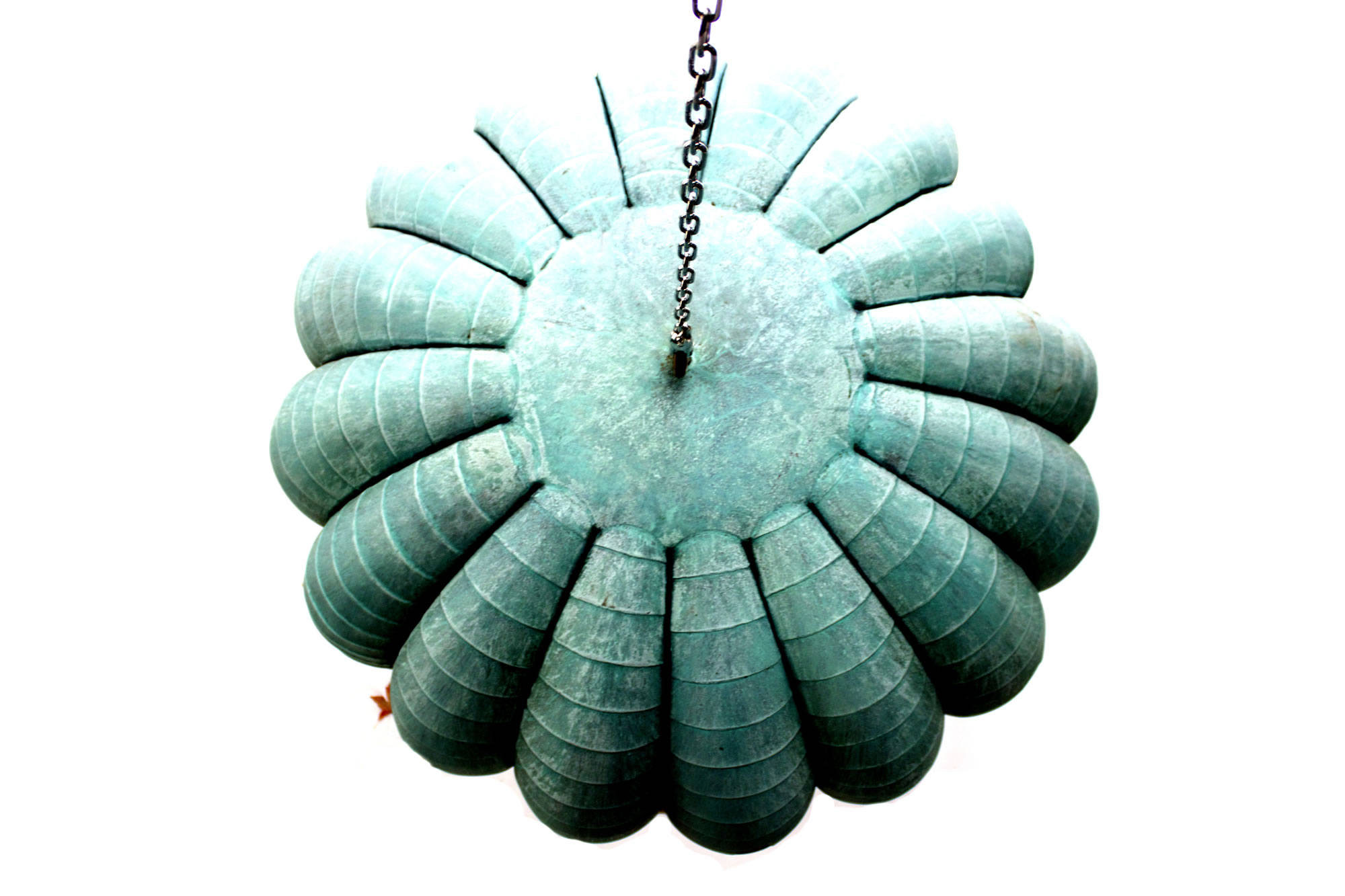 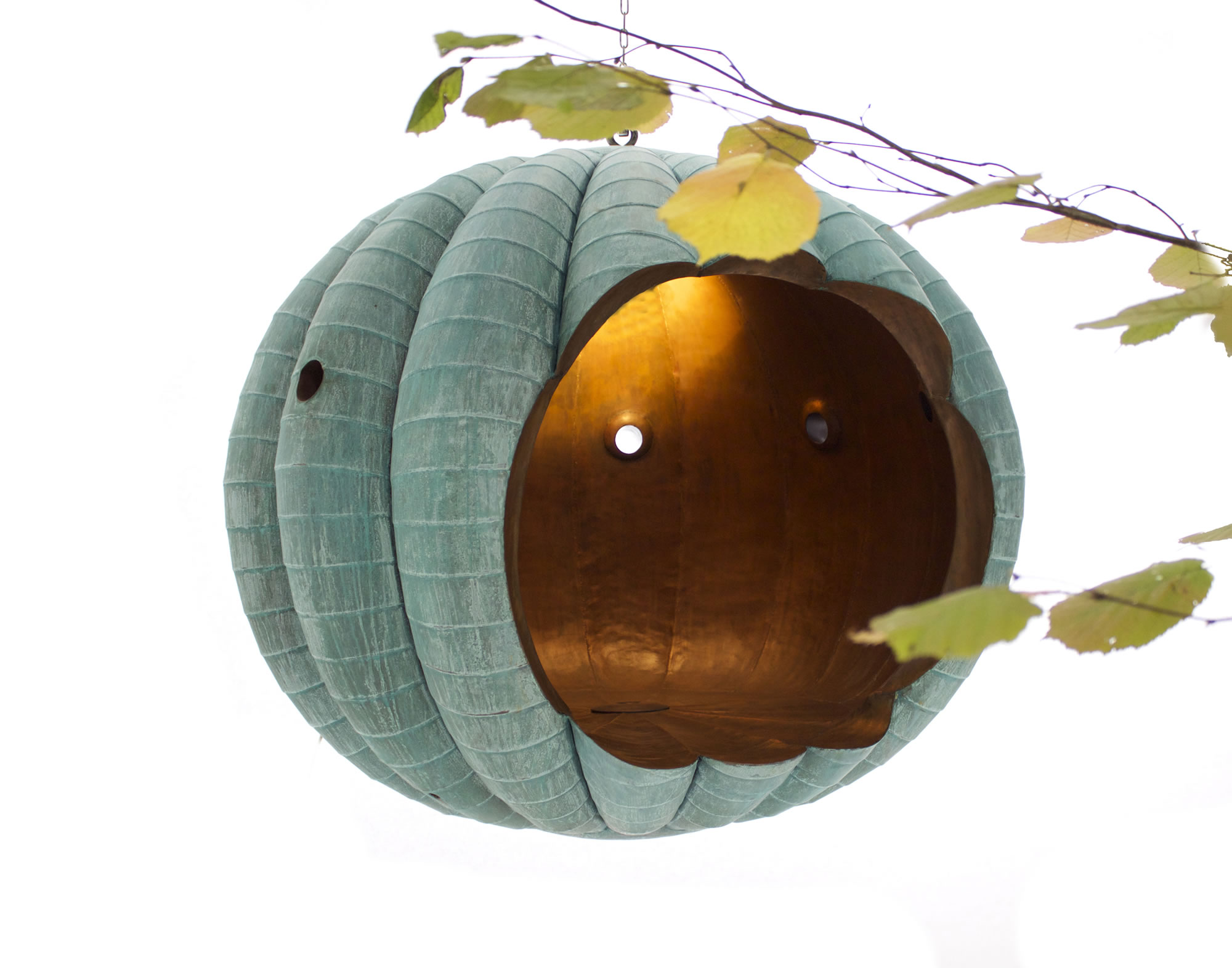 “Nature and its subtleties have always been my design program. But opulence and luxury offer the theater that I love to live with. Copper is a wonderful medium to merge these two desires,” said Myburgh.
Born in Durban, South Africa, Myburgh completed his national service then left on his voyage of discovery:
“My travels have taken me all over the world. From the jungles of Guatemala to the deserts of Egypt,” he said. “It is these places and these experiences that help me see the world as I see it now.” 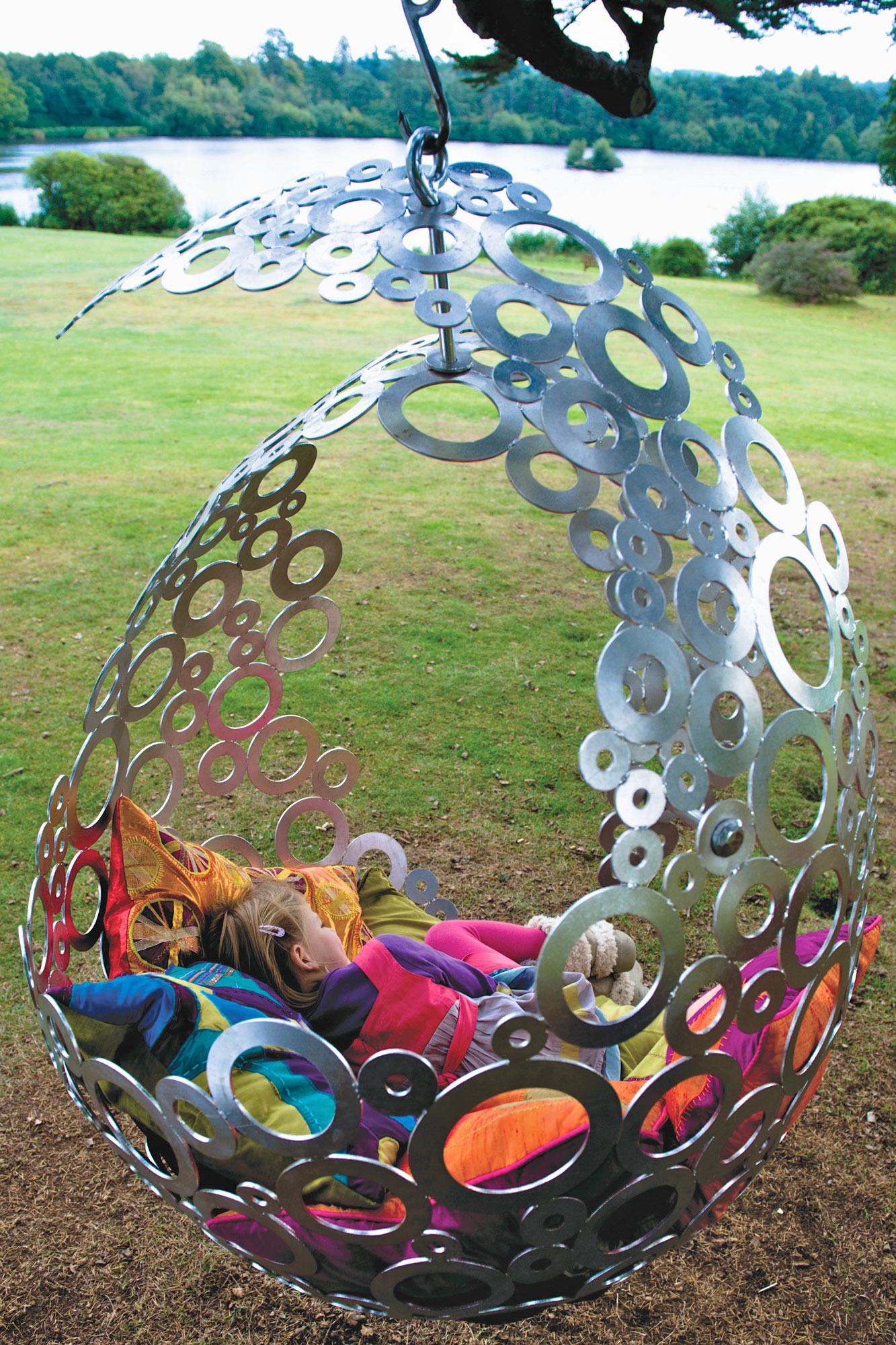 In 1997 he arrived in London. Drawn to working with copper, which he believes like him, is very adaptable, he began to explore large scale metal work. A year later, in partnership with Caroline Fletcher (his future wife), Myburgh Designs launched the Mood Swing collection.
“Each Myburgh design blends high-end sculptural originality with lasting functionality, inviting you to create and enjoy your own personal paradise. Imaginatively designed garden swing seats are crafted using luxurious organic materials that mellow beautifully with age,” according to the Myburgh Design brochure. 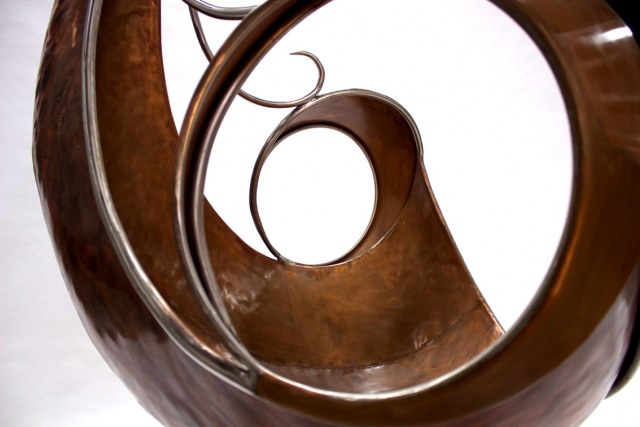 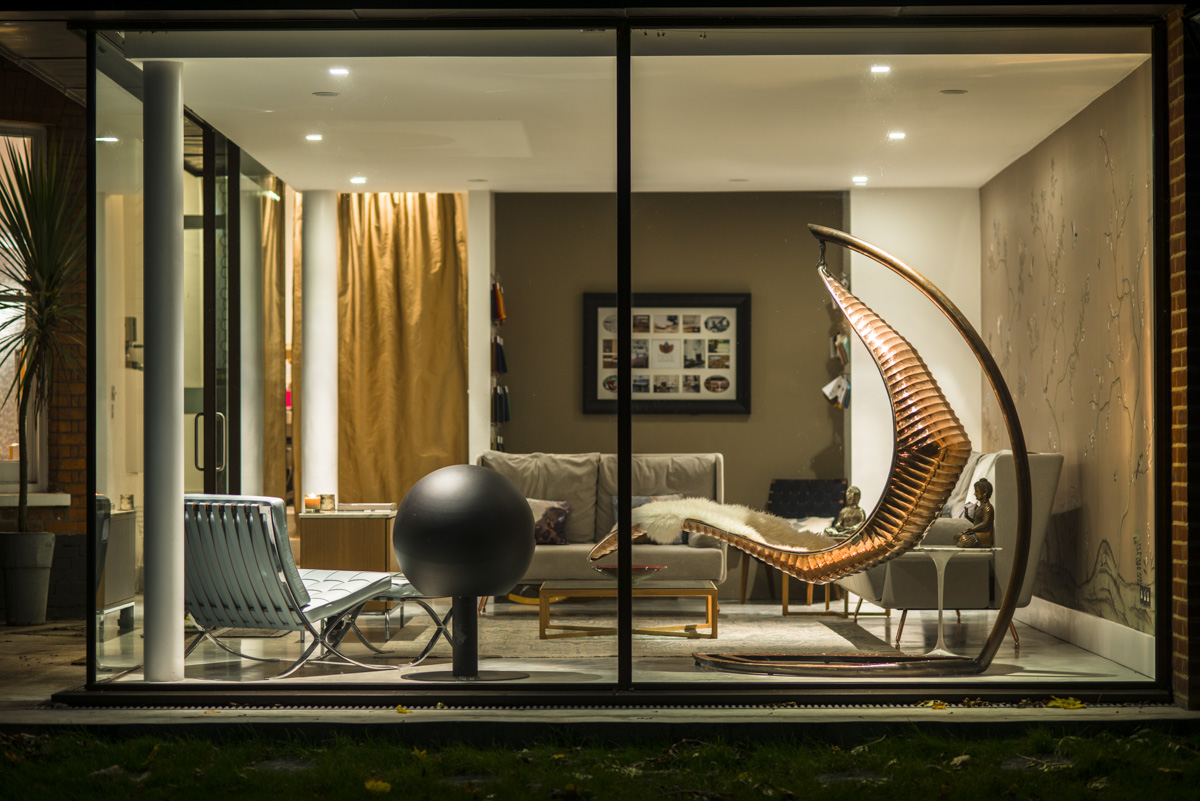 Myburgh was warned on Dragon’s Den that “artistic talent should stay with you—for all your talents you’ll drive people mad who go into business with you.”
Well, happily it doesn’t seem to have put him off and his Mood Swing collection is still going strong and rocking the world.