When urban habitat initiative MINI Living collaborated with architect Sam Jacob to create the “Urban Cabin” for this year’s London Design Festival, they wanted to exhibit what living with a small footprint would look like.

In an expensive metropolis like London, finding an affordable place to live often means accepting life in a small space. Still, there are many creative ways in which urbanites have used, and continue to use, the limited space that they have. The Urban Cabin gives us another idea of how that can be done, with an architecture that relates to the history of London itself.

“With the concept we wanted to visualize London’s cultural differences and traditions, but also modern habits that are very typical for the city,” explains Corinna Natter, an experience designer at MINI LIVING, on the company’s website.

At its core, the Urban Cabin is a narrow box attached to a quaint library. What Sam Jacob and MINI have given us is essentially London’s version of Mies van der Rohe’s “Barcelona Pavilion,” a project that the great German architect designed for the 1929 International Exposition. Built with materials and an open plan rich in meaning, the Urban Cabin could be unofficially referred to as “London Pavilion.” The exterior of the cabin consists mostly of a reflective material. The façade, like London itself, mirrors the globe in terms of its diverse population and multivariate cultural history. 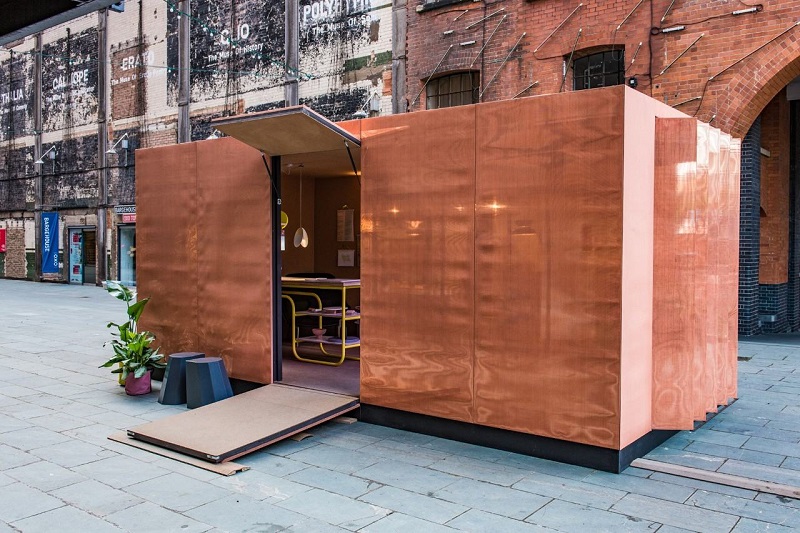 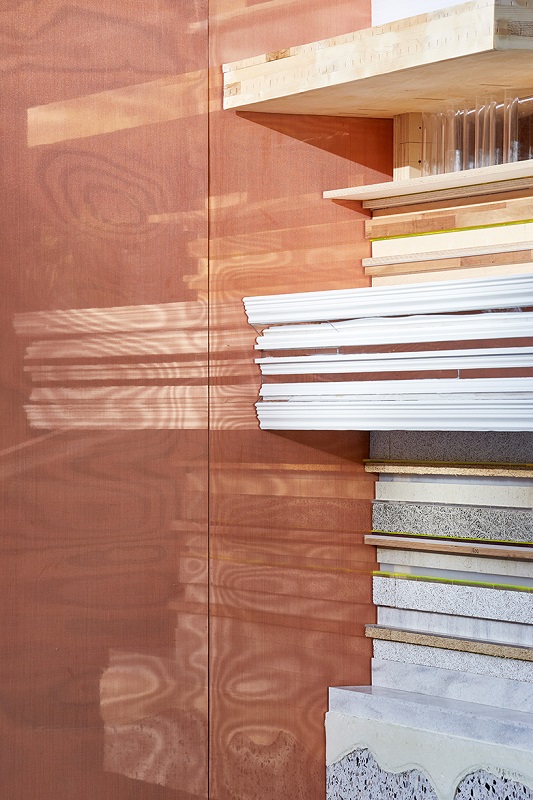 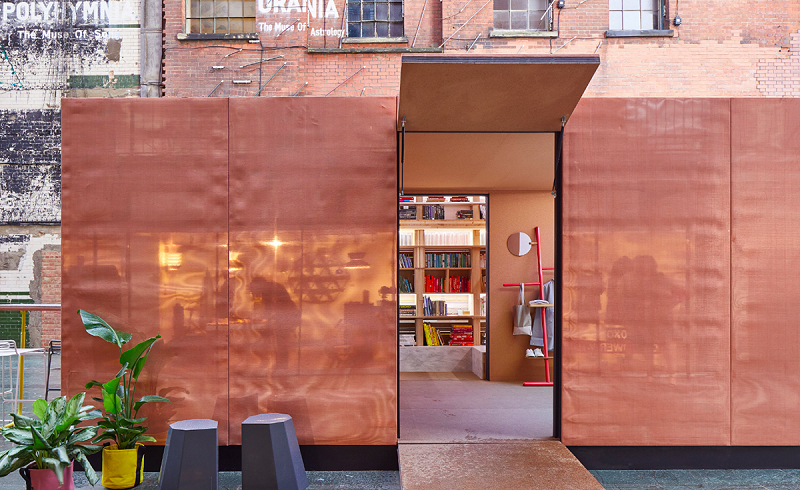 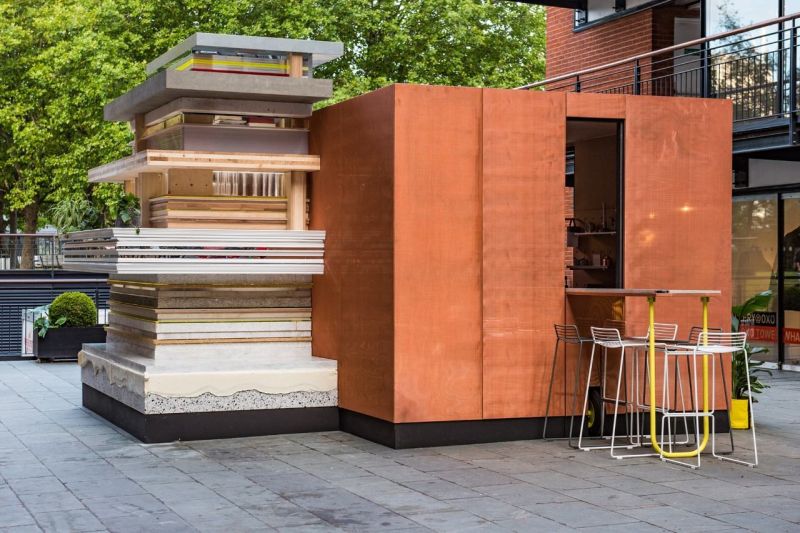 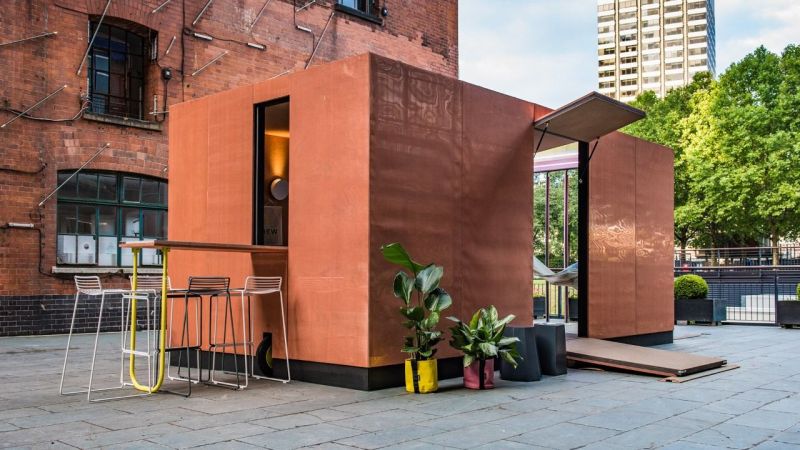 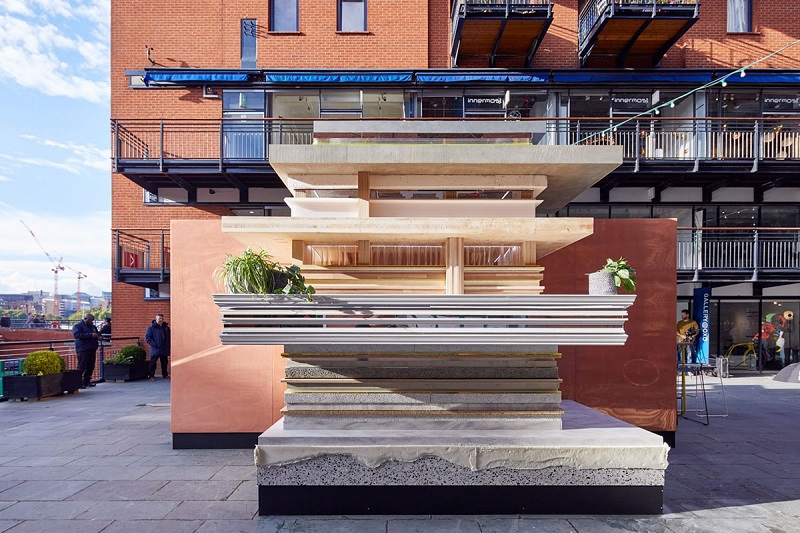 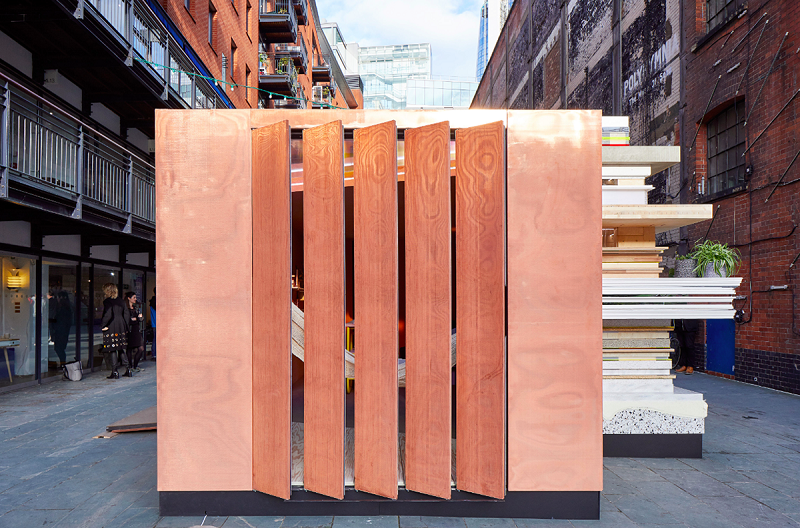 The library is housed in the section of the cabin that stands out as much as it sticks out. From the outside, it resembles a quickly arranged stack of different-sized books, each spine bearing its own identity. On the inside, the library is layered with stories of London, with a selection organized not by subject or the Dewey Decimal System, but by color. This colorful representation of the city is the combined result of its inhabitants’ various ways of living over the past 400 years. While many Londoners are aware that 121 of their country’s public libraries closed in 2017 alone, the Urban Cabin’s library reminds us of what is being lost. Unlike any other space in a city (including museums), libraries are transcendent areas where one can open a book and suddenly be anywhere in time. In the cabin’s library and overall architecture, we are speed reading London through the documentation of psychogeography and the changing ways of existing in the city. 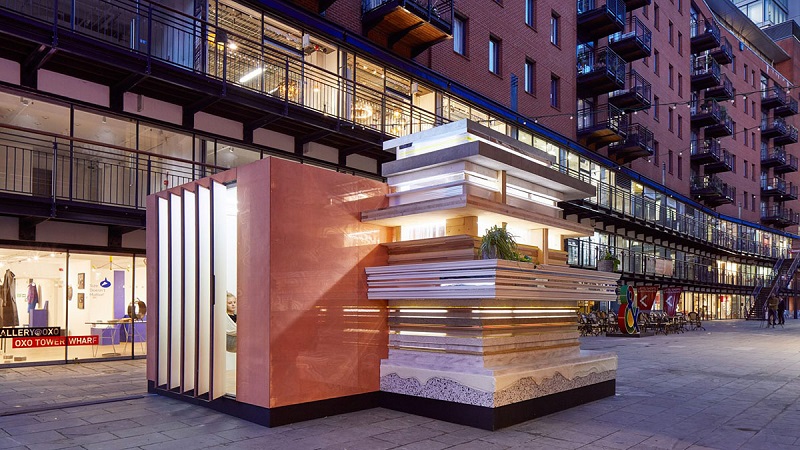 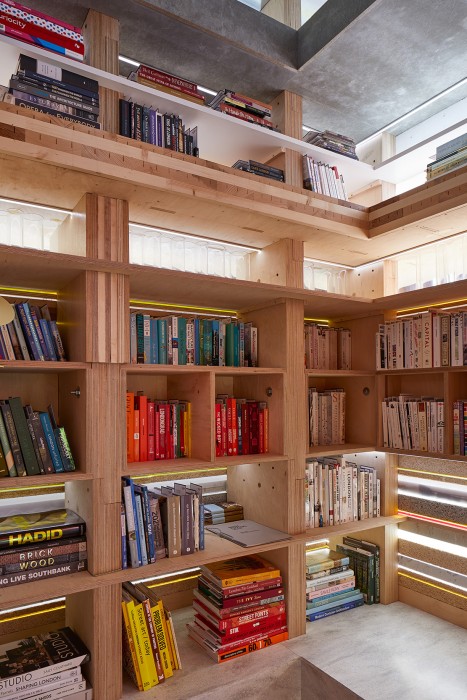 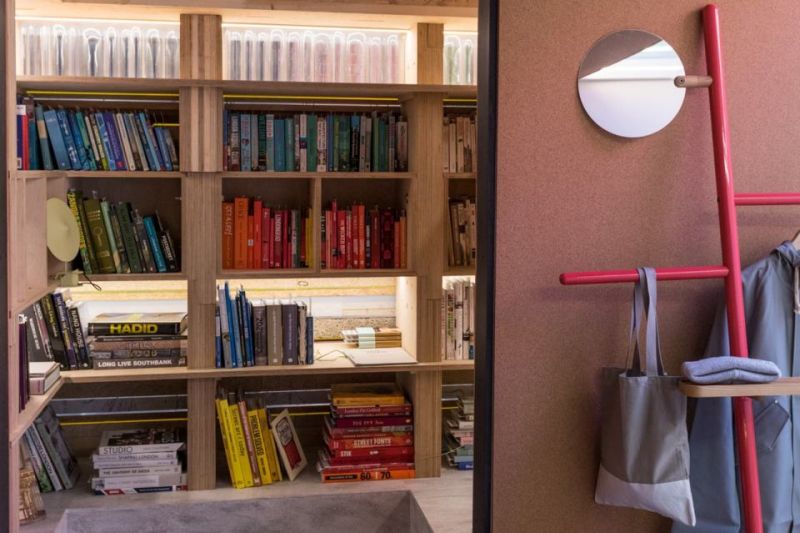 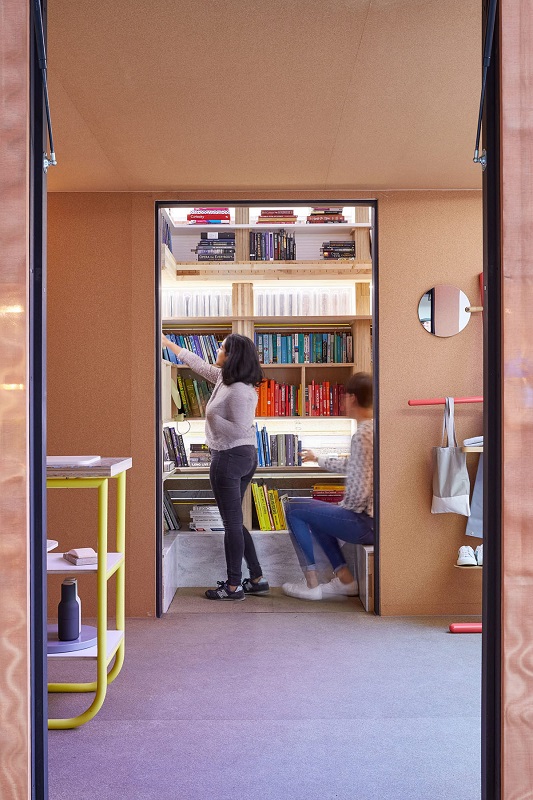 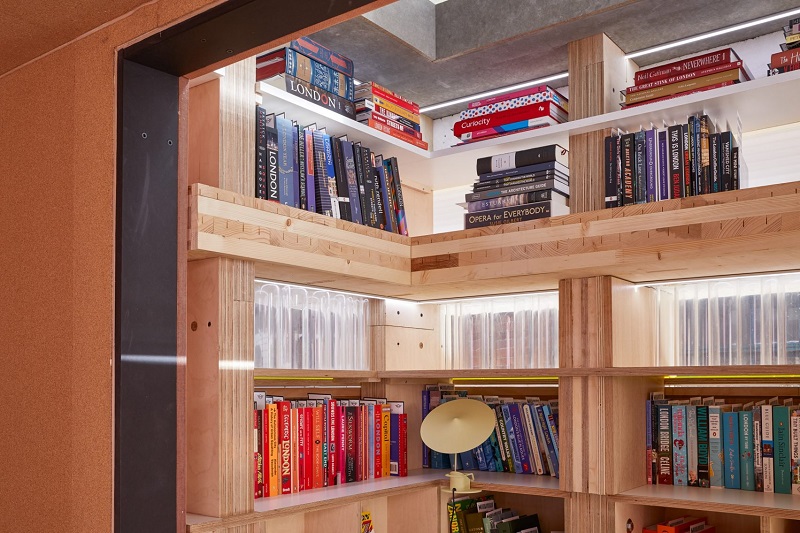 Another meaningful part of the cabin is the sleeping area, where nothing but a hammock exists. To rest or sleep in a hammock is to experience life with everything up in the air: one can never be sure whether the support system will hold. As such, the hammock is emblematic of the generational precariousness of London life. Due to things like Second World War bombardment and escalating rents, the places where the average person can sleep in the city without a care are few. To rest in London is to be exposed to that vulnerability and to embrace it. The sleeping area is the only part of the cabin that feels exposed. One can sleep in front of a floor-to-ceiling high window and louvres, with their clothing and accessories all on a stand leaning against the wall. Above, a skylight acts like a built-in alarm clock, awaking potential sleepers with the natural light of daybreak. 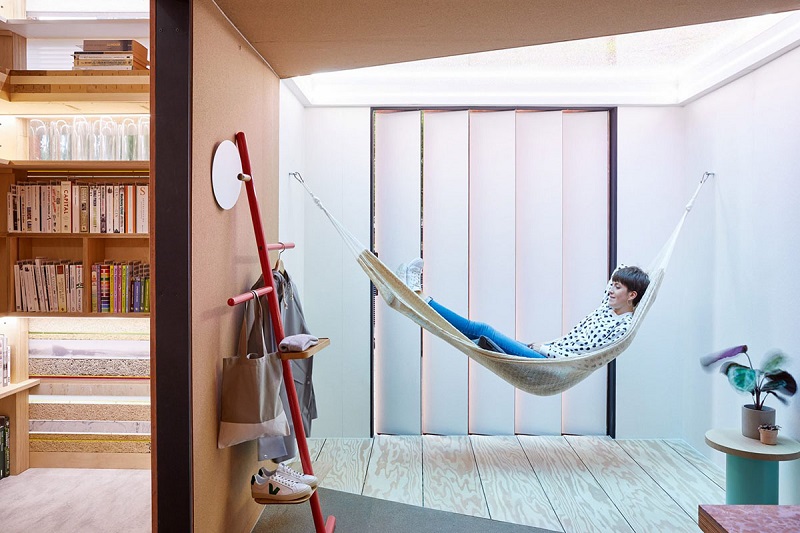 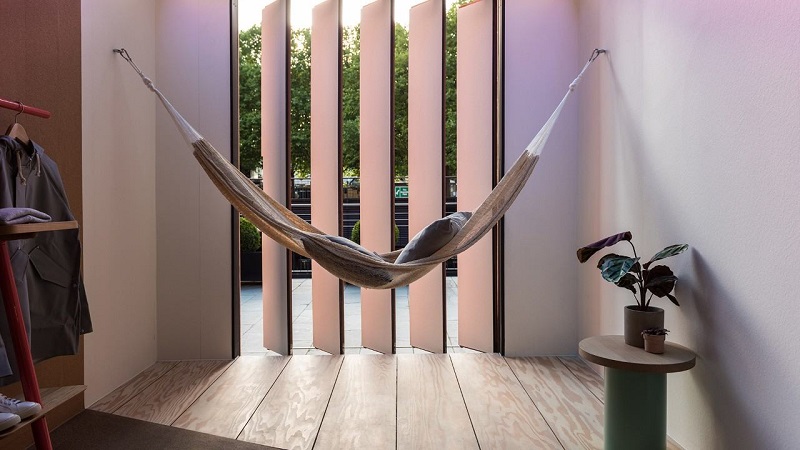 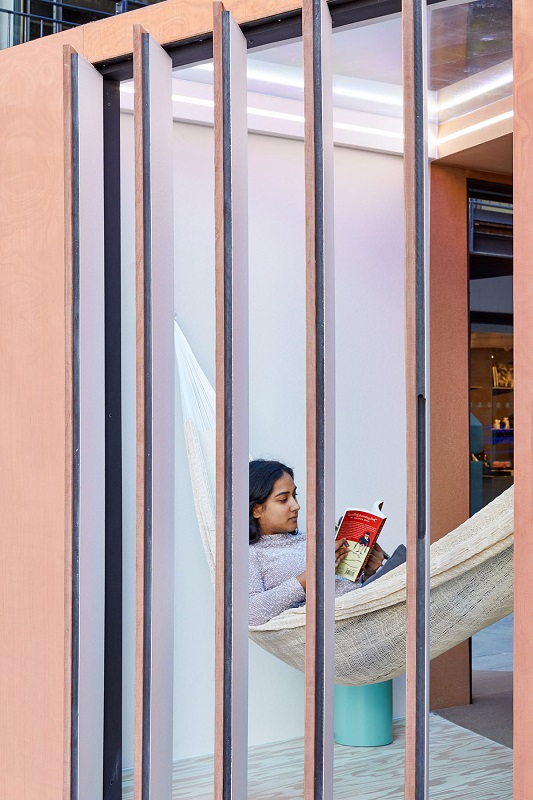 The kitchen is the most decorated part of the cabin, where Londoners can socialize over food both inside and out. A perforated wall board allows for multiple configurations of shelving depending on the inhabitant’s particular needs. Not only can the décor be changed, but the kitchen itself can be moved. “Perhaps it’s because of the usual weather, but when the sun shines, Londoners love to make the most of it — makeshift BBQs, lunch-hour sunbathing, and so on,” explains Jacob. “Here, the idea is that if the weather is good you can roll the whole kitchen outside. We thought that providing this kind of flexibility — where your living space could turn inside out — would be great.” 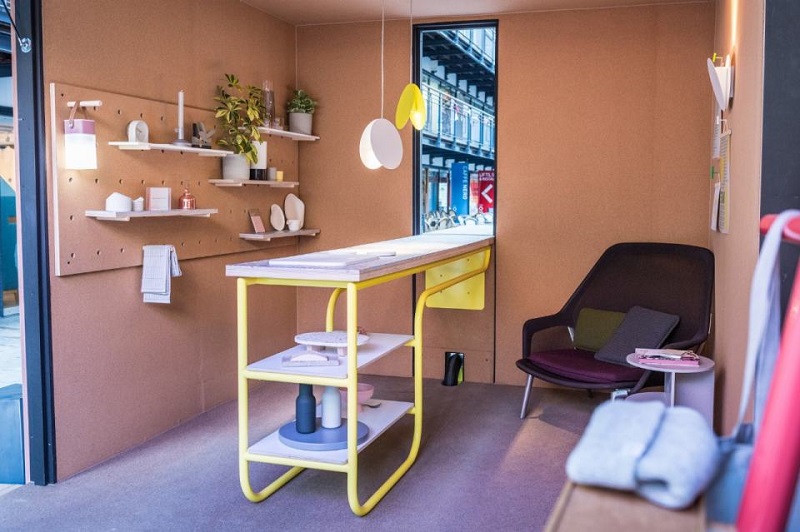 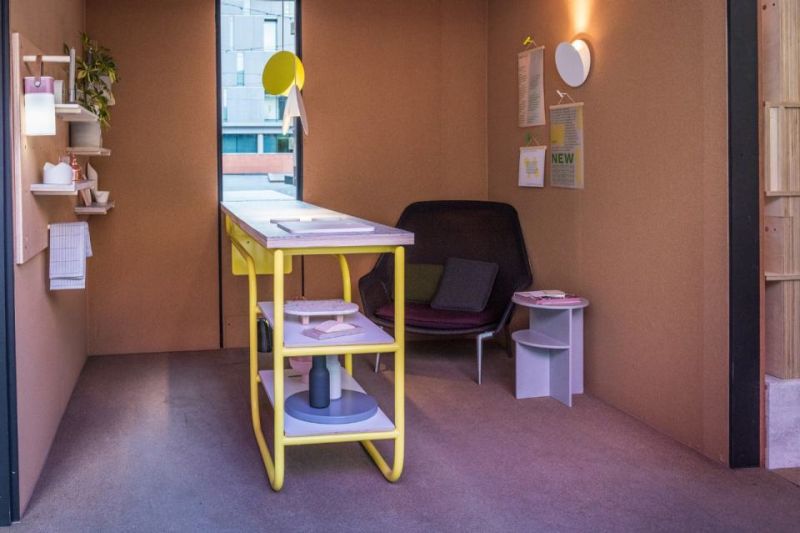 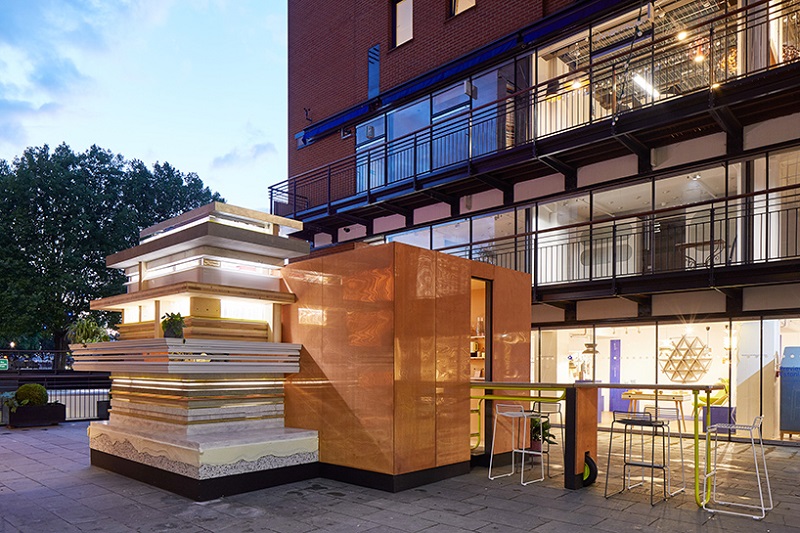 The Urban Cabin is a practical space rich in London history. MINI Living will exhibit another Urban Cabin in New York next month, with hopes of further tailoring the concept to other cities in 2018.

Watch this video for a quick 53-second look around Sam Jacob and MINI’s Urban Cabin.