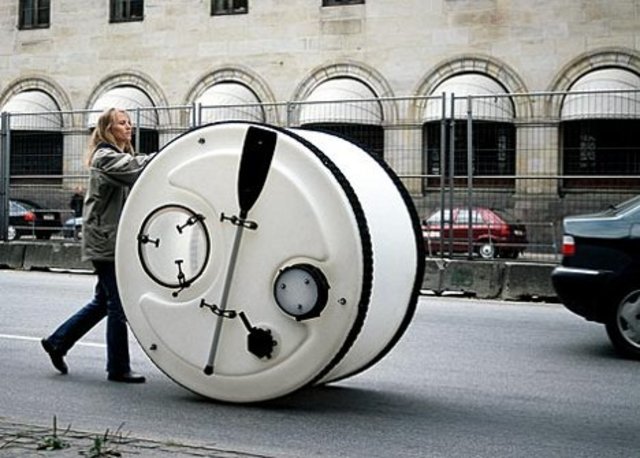 Snails and turtles are so lucky, carrying their homes with them everywhere they go. You can recreate the experience with a huge mobile home, but it isn’t quite the same. This rolling Snail Shell System, designed by N55, is more like the smaller shelters borne by snails: light, tiny and infinitely portable. With just enough room inside for one person, the shelter can be rolled just about anywhere.

Walking behind the wheel as it rolls is one way to move it from here to there, but it can also be turned into a small boat for traversing soggy locales. A resident can move it hamster wheel-style by walking inside, or it can be hitched to a vehicle and towed. Several Snail Shells can be networked to form a temporary community, or a single unit can be stashed in a regular parking space. For particularly hairy situations, the tiny dwelling can even be buried in the ground with only the entrance hatch exposed. 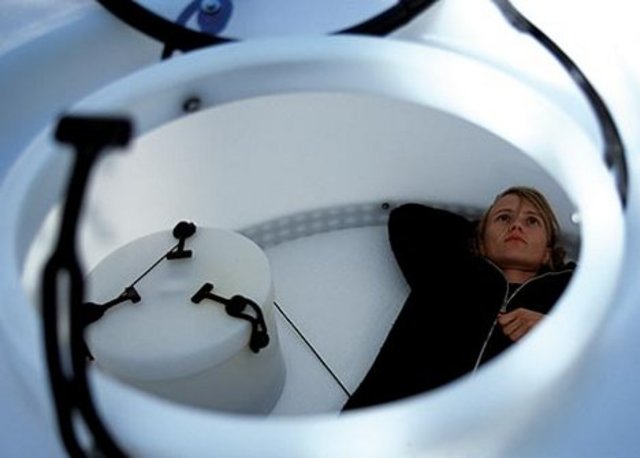 Inside, a gear box holds essentials like water containers, plastic bags, a flashlight, alcohol burner and kettle. A second container functions as a toilet when lined with a plastic bag, though presumably one would only want to use this in an emergency. The Snail Shell emergency shelter system is obviously not meant to be a long-term housing solution, but could be invaluable in the event of a natural disaster that forces quick evacuation.

“The SNAIL SHELL SYSTEM is a low cost system that enables persons to move around, change their whereabouts and live in various environments. One unit supplies space for one person. It is mobile both on land and water. One person can move it slowly, either by pushing it like a wheel, walking inside it or on top of it On water it can be rowed, moved by a kite or hooked up to a vessel, for example, a ferry. The unit rests on one flat side and can be anchored in lakes, rivers, harbours or at sea. On land, it can be placed in city spaces, fields, forests etc The SNAIL SHELL SYSTEM takes up very little space and can easily be placed in a discreet way. It can be buried in the ground, exposing only the entrance. It can also function as a comfortable space inside existing buildings Several units can meet up and form temporary communities The unit can be hooked up onto existing infrastructure like telecommunication lines and electricity cables (for example, by connecting it to street lamps). “

“If special devices are added, the unit can supply its own energy The SNAIL SHELL SYSTEM can also be used for transporting different items and it can provide protection for persons when they participate in situations like demonstrations.”