Large-scale strawberry harvests are tougher than they sound. The fruit is fragile and must be delicately plucked, usually by teams of laborers working slowly in the hot sun. If they’re bruised or the leafy calyx is removed too roughly, the berries rot much faster. Like most crops, strawberries come with a low profit margin, so farmers often rely on migrant workers more willing to accept low pay — but as many countries tighten their borders, that labor is in short supply. For years, farmers have hoped for a strawberry harvesting robot capable of handling the berries with care. Is a new 16-armed autonomous harvesting machine up to the task? 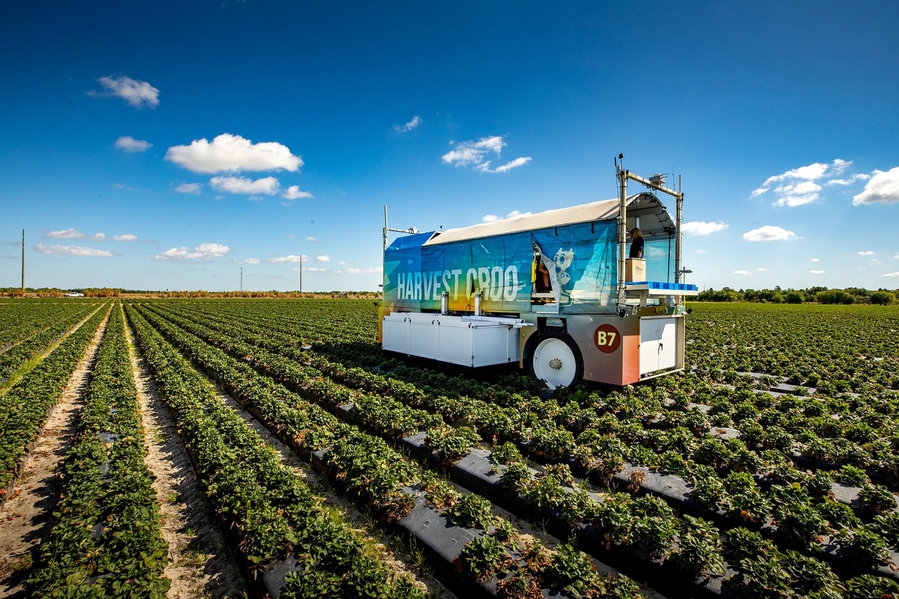 Developed by Florida-based company Harvest CROO (Computer Robotic Optimized Obtainer) Robotics, this rolling piece of heavy machinery is reportedly able to do anything a human picker can do, including judging whether berries are ripe enough to be picked. Measuring 32 feet long and 18 feet wide, the autonomous machine scans the plants to find harvestable berries using artificial intelligence and a machine learning vision system. 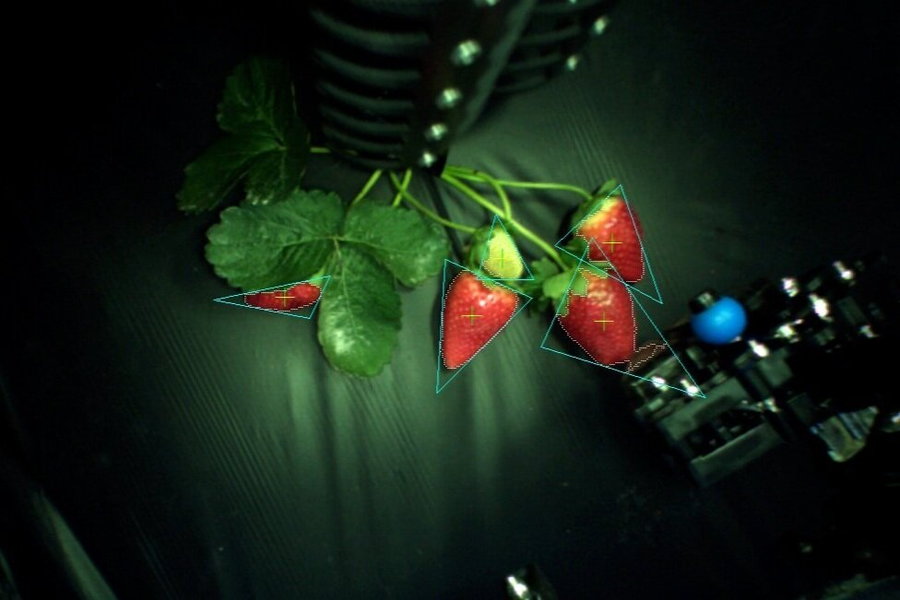 Each harvester is equipped with 16 individually functioning robots, which agitate the leaves, identify the best berries, snip them, and pick them up. A key part of the machine is its patented “Pitzer Wheel,” which features a series of soft silicone claws that allow it to gather the berries very rapidly. It’s named for former Intel engineer Bob Pitzer, who leads the Harvest CROO design team. 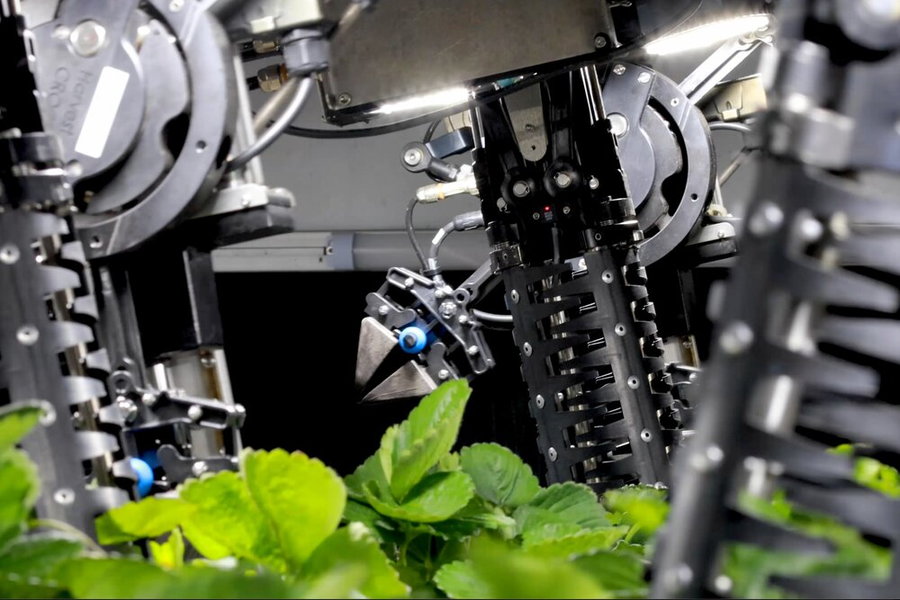 The robotic harvester is also equipped with a LiDAR system, a remote sensing method using lasers that map surroundings and identify nearby objects. This grants the machine a 360-degree, three-dimensional view of the fields for more precise navigation down rows of strawberries. It also prevents collisions with people and other obstacles. The machine spans several rows at once. Able to do the job of six to 10 workers, it’s capable of picking eight acres of strawberries in a 20-hour day, even after the sun sets.

Harvest CROO just completed a round of commercial tests, and the robotic pickers should be ready for deployment in Florida by December after a seven-year development process. About 70 percent of the U.S. strawberry industry is invested in the company, with most farms located in California. The company plans to scale up production next year to provide 1,500 machines to growers around the country. Harvest CROO will own and operate the machines at a price that matches what farms pay for human labor. 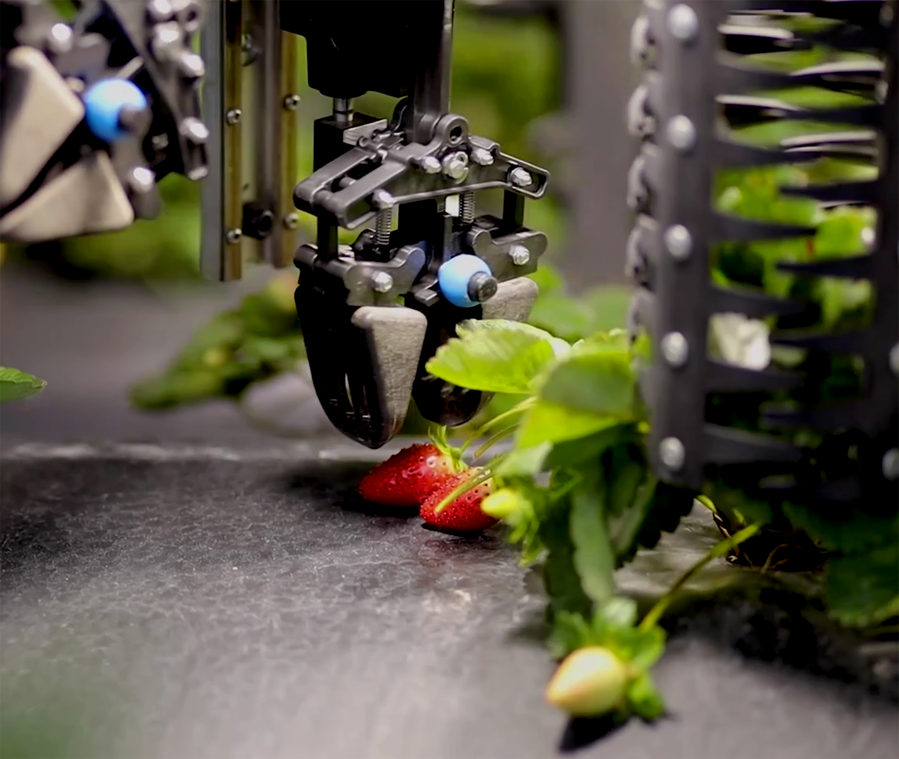 “Over last 15 years we’ve heard from growers who are dealing with labor issues and government and saying it just isn’t fun anymore. Our goal is to put the fun back in farming,” said Gary Wishnatzki, co-founder and managing partner of Harvest Croo Robotics. “My experience at picking strawberries is it is a young person’s game. Harvesting strawberries hasn’t changed in the past 100 years. We’re still doing it the same way. If we don’t have young people coming to the field, we’re going to have to have to rely on robotics.”

So what does this mean for you, the average reader who isn’t a strawberry grower? More plentiful strawberries year-round. Not so long ago, few retailers carried strawberries in winter because they were too expensive. As labor costs go up, they’ll become even less affordable and less available. That could mean in the not-so-distant future, only wealthy families have access to them (unless, of course, you grow your own). Robotic solutions like this harvester will likely become a crucial element of food production in the decades to come.