Temporary architecture should never be disposable, even if it’s designed with a very specific purpose in mind. With ProtoCAMPO, designers WALD and Bollinger+Grohmann have created a beautiful example of what that kind of sustainability can look like. Built for the Villa Médici Festival des Cabanes 2022, the modular pavilion can be fully disassembled and reused when the event is over. Unlike most event tents, it’s neither flimsy nor boring. Paying homage to classic Roman architecture, it consists of a wooden structure (agora) upon which an inflatable dome (cupola) sits. 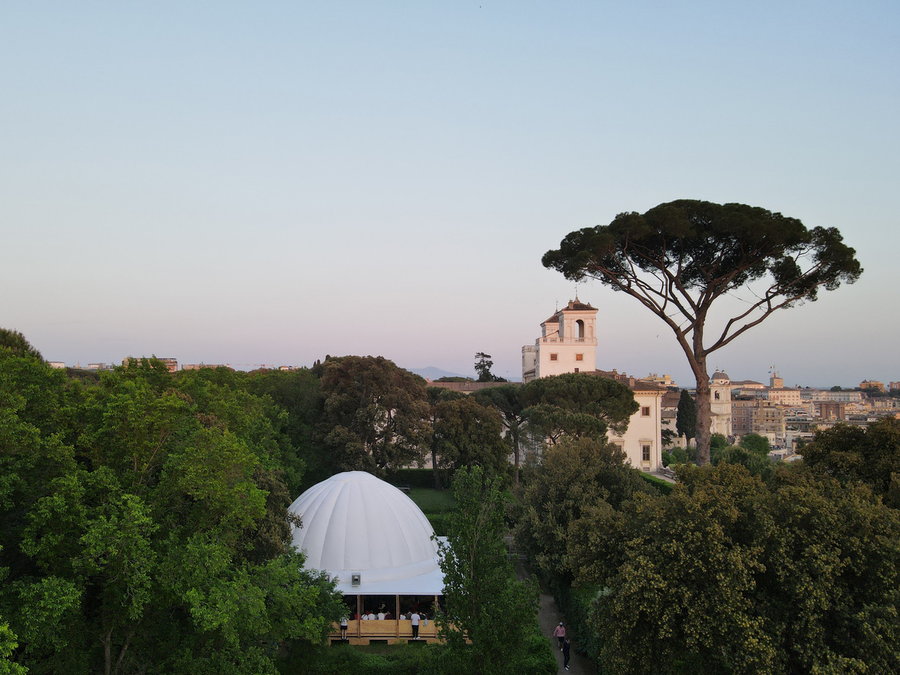 Co-designed and built with teachers and 44 students from Haroun Tazieff high school in Saint-Paul-lés-Dax, France, ProtoCAMPO is the third iteration of a building technique developed by Frédérique Barchelard and Flavien Menu, themselves former fellows of Villa Medici (2019-2020). The first was the Proto-Habitat, built during their stay in Rome, and the second was the SOLARproto, a 300-square-meter exhibition space built in Amsterdam. ProtoCAMPO takes those concepts and builds upon them, tailored to its unique environment and purpose in one of the city’s most beautifully preserved Renaissance palaces — not to mention home to The French Academy in Rome. 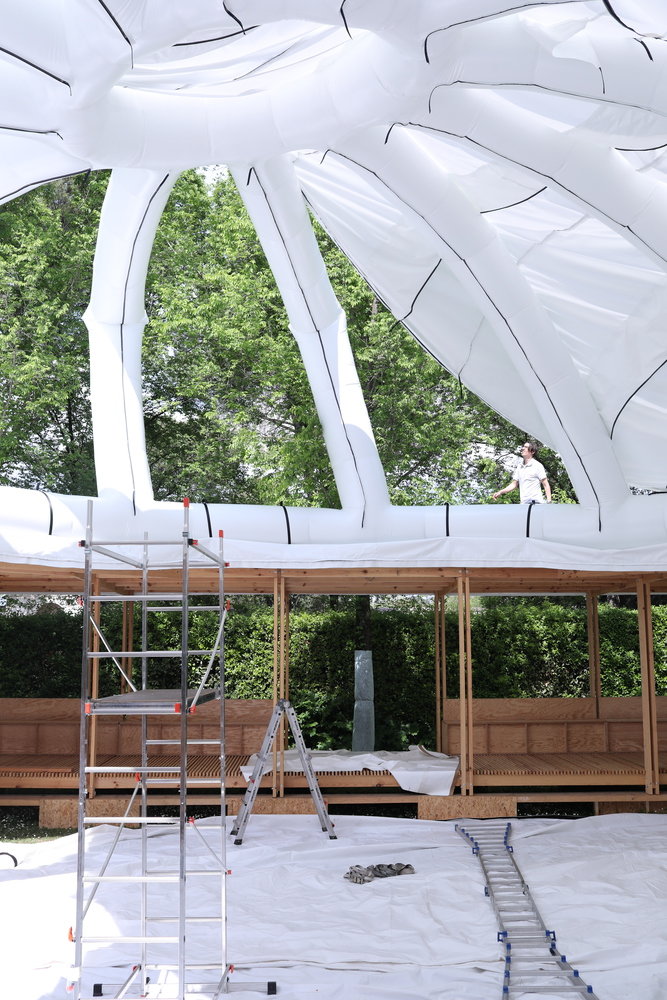 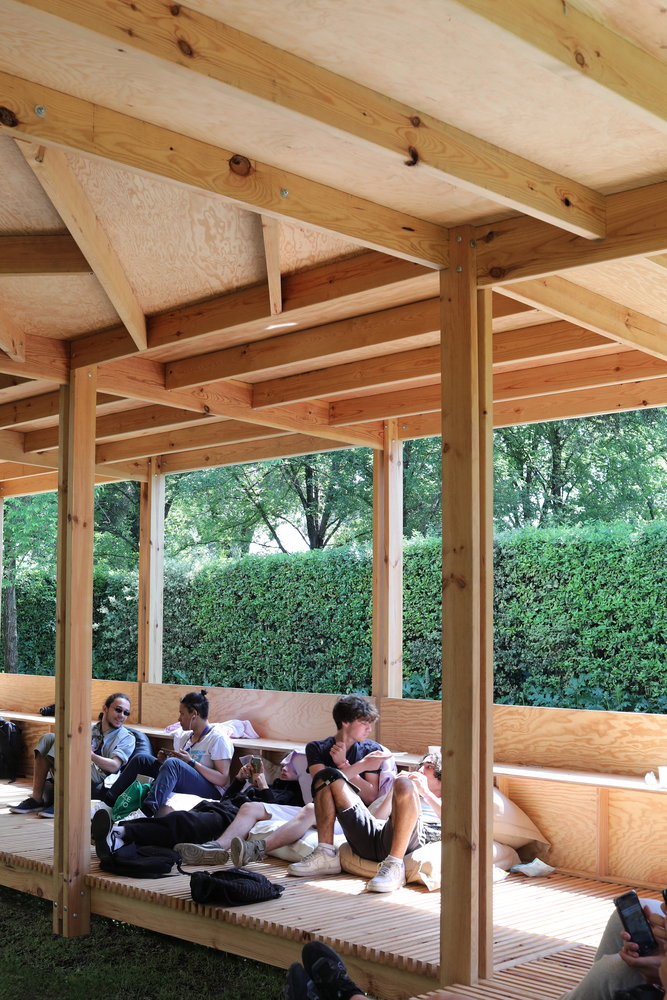 “ProtoCAMPO is both low-tech and high-tech,” explain the designers. “Low tech, as it is assembled by hand using traditional and basic carpentry and joinery assemblage techniques to build up the prefabricated timber pieces. High-tech, in the conception of the inflatable cupola that can be implemented in less than an hour to unfold a six-meter diameter dome weighing only 300 kilograms. protoCAMPO subtly plays with the rhythm of the Villa Medici’s garden framing views of the 200-year-old pine trees and the historic villa. The repetitive timber structure echoes the Renaissance grid structure of the garden being both classical and wild. The dialogue between the pavilion and the surrounding nature evolves over the day, playing with the sun’s path and the rhythm of the garden.” 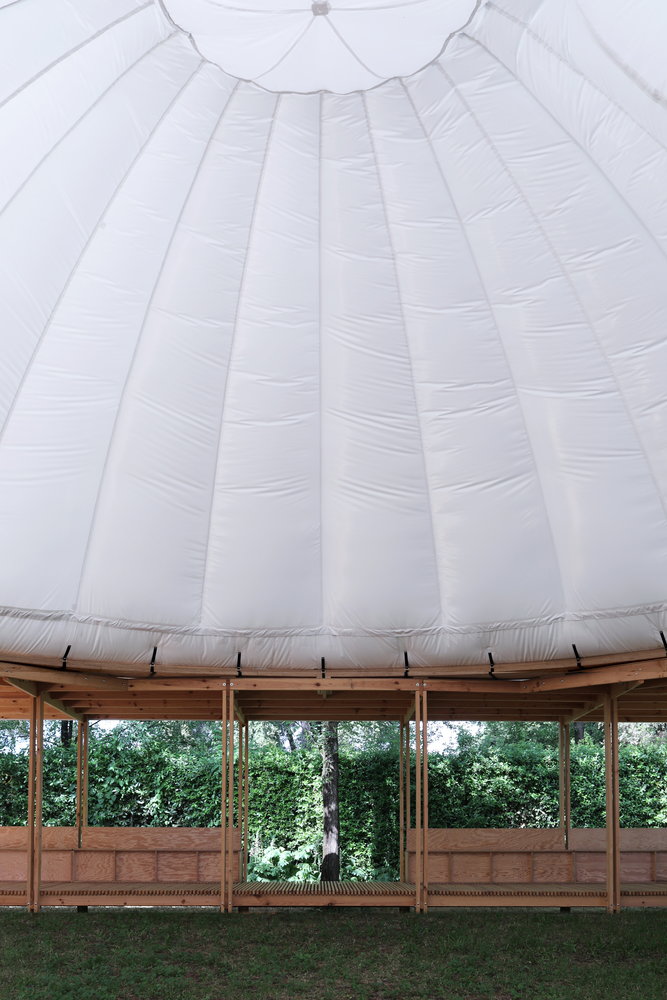 The cupola of the pavilion shelters up to 350 occupants while remaining open to the sun and wind, and the wooden base is sturdy enough to withstand heavy traffic. In the first week of the festival, protoCAMPO welcomed 300 high school students as part of the Residence Pro educational program developed by Villa Medici with the Nouvelle-Aquitaine Region. Now, it’s hosting events, concerts, dinners, shows, and some of the villa’s cultural events for the remainder of the year. Like WALD’s other “proto-architecture” projects, it’s prefabricated, locally sourced, and modular, so it can be quickly assembled and disassembled. No word yet on how it will be used next. 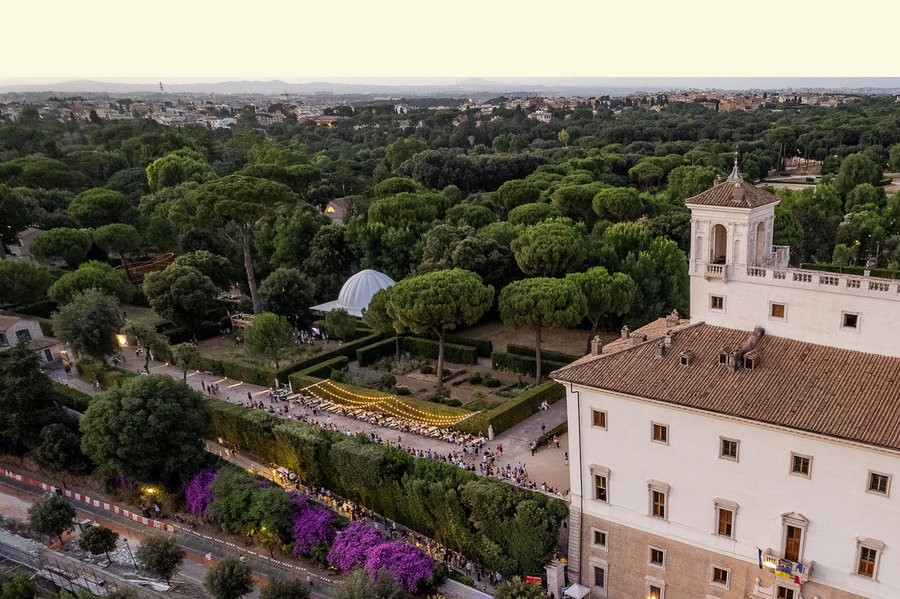 Located near Rome’s famous Spanish Steps, the Villa Medici was designed by Bartolomeo Ammanati and built by Grand Duke of Tuscany Ferdinando de Medici in the 16th century as an estate and open-air museum celebrating the Medici family’s influence in Rome. Its grounds include Roman bas-reliefs and statues, botanical gardens, formal gardens, and palatial architecture. In 1803, it became home to The French Academy in Rome, which aims to welcome artists, creators, and art historians in residence, curate cultural and artistic programs, and conserve the palace’s architectural and landscape heritage.