You can use all sorts of clever tricks to make the most of a small space: buying multifunctional or transforming furniture, adding a loft, using the full height of the walls for shelving, allowing the interiors to expand into the outdoors, and adopting a more minimalist lifestyle, to name a few. But nothing makes a bigger impact than storage custom-built for that space, selectively hiding some of your belongings while highlighting others. 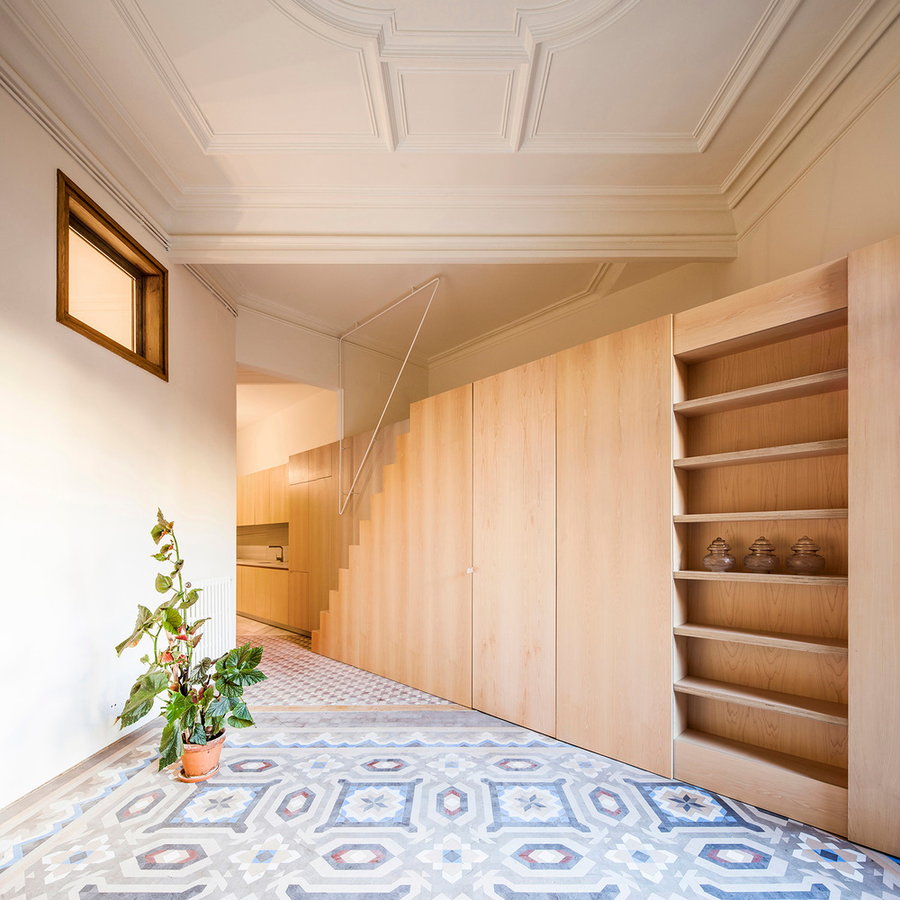 In Barcelona’s Eixample district, architects Anna and Eugeni Bach turned a beautiful but highly challenging apartment into a cozy live/work residence where everything has its place. The corner flat has an unusual floor plan featuring four diagonally angled rooms, including a trapezoidal kitchen. There’s minimal square footage to work with, but the historic building features some absolutely stunning architectural details, like tray ceilings, a marble fireplace, and ornate wooden doors.

The owners want to use the apartment as a study for the next 15 years, at which point they’ll retire and live there. That means it has to be both multifunctional and comfortable to live in, while also offering the possibility of hosting their future grandchildren. The living room, entryway, and bedroom extend from the back wall at a 45-degree angle that’s known as “chamfered,” a layout that’s not uncommon in Barcelona’s older neighborhoods. 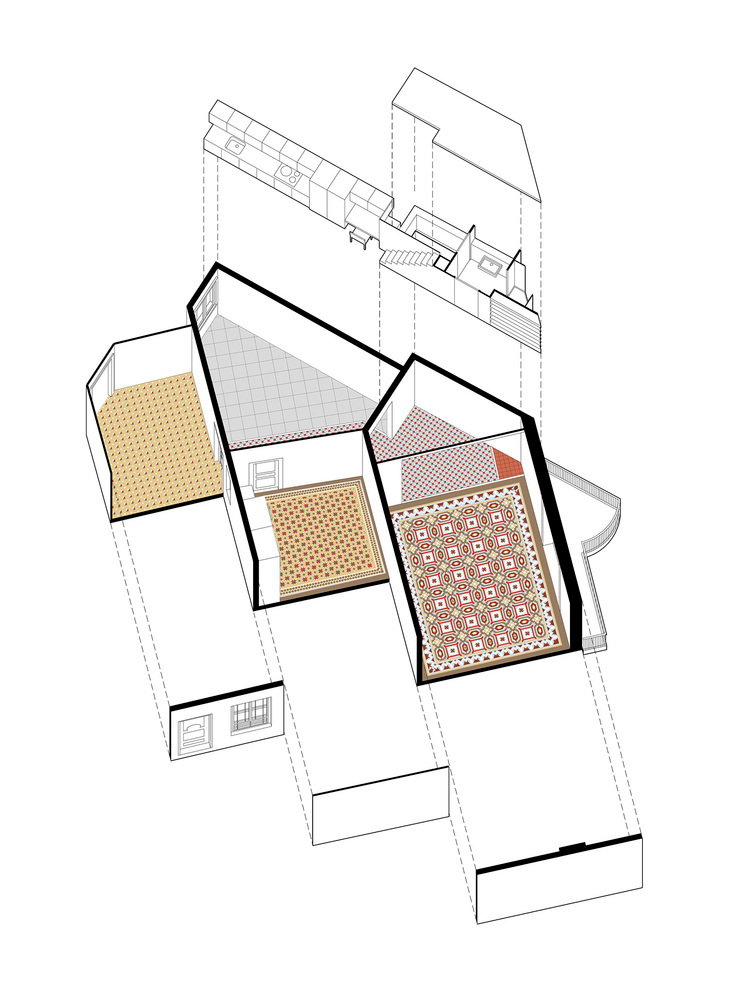 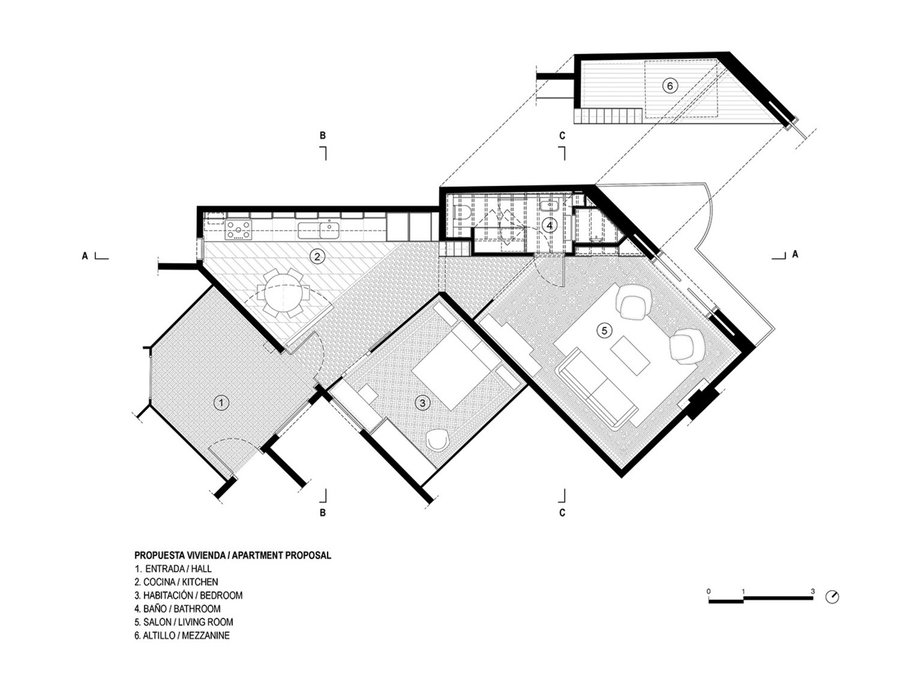 The biggest and most successful intervention is the plywood built-in cabinetry extending along the flat’s one straight exterior wall, from the kitchen into the living room. The architects envisioned it as a home for all of the apartment’s “services,” including the kitchen cabinets and appliances, bookcases, closets, bathroom, and even a set of built-in stairs leading up to the uppermost level of storage space. Made of smooth, pale plywood and devoid of most visible hardware, this cabinet brings a contemporary feel to the home and unifies its two main rooms.

At the same time, dynamic new flooring subtly separates each space from the next while maintaining a cohesive look. In the kitchen, marble tiles follow the angle of the built-in cabinet, butting up against the straight line of the patterned hallway flooring. The living room, bedroom, and entryway all have their own unique colors and patterns, too, contrasting the clean feeling of the white walls and wooden accents. 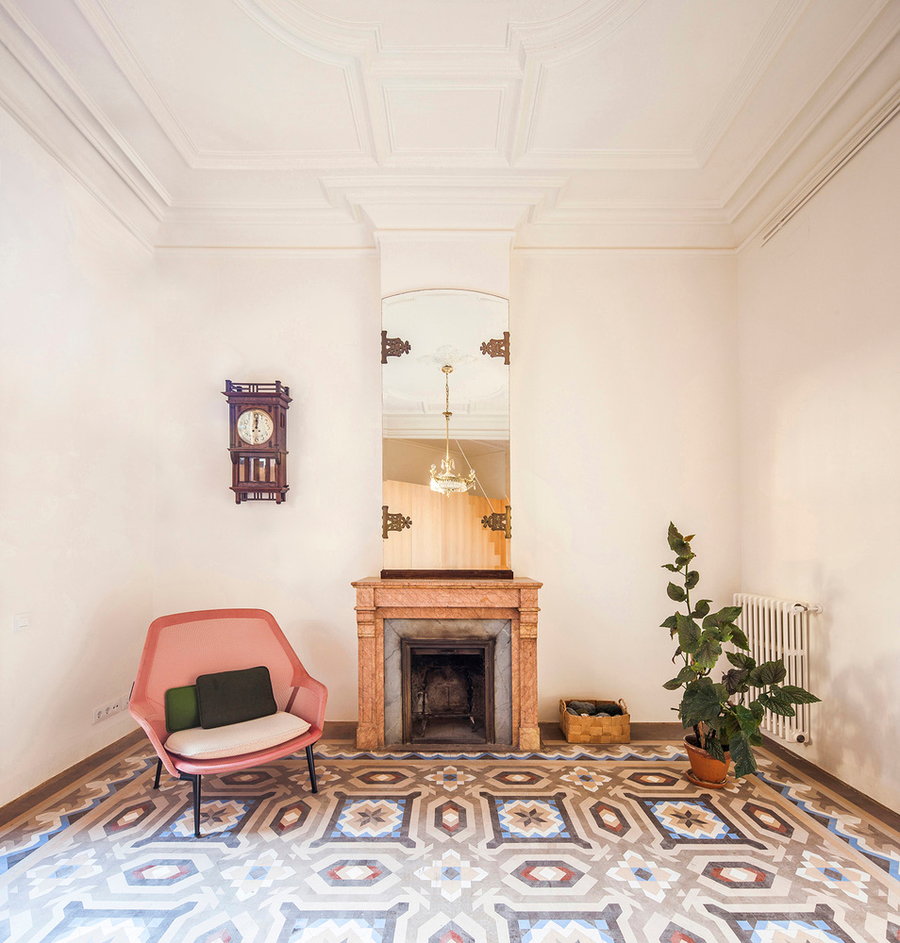 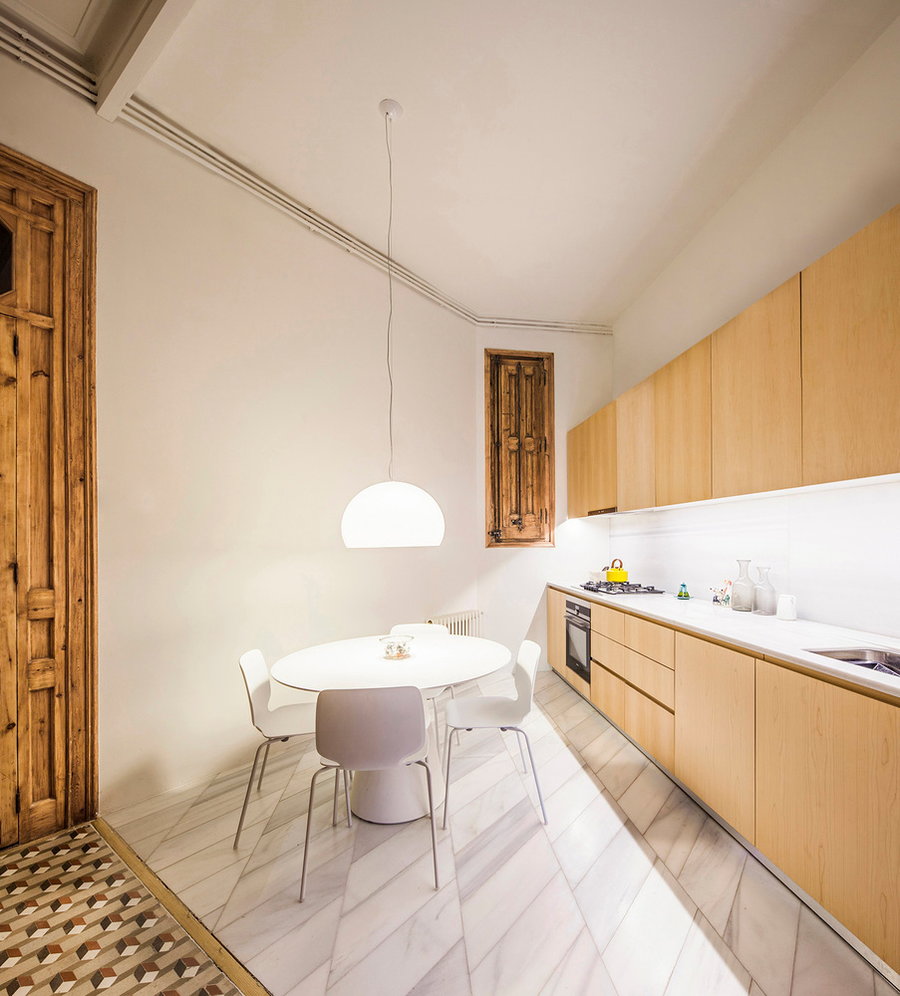 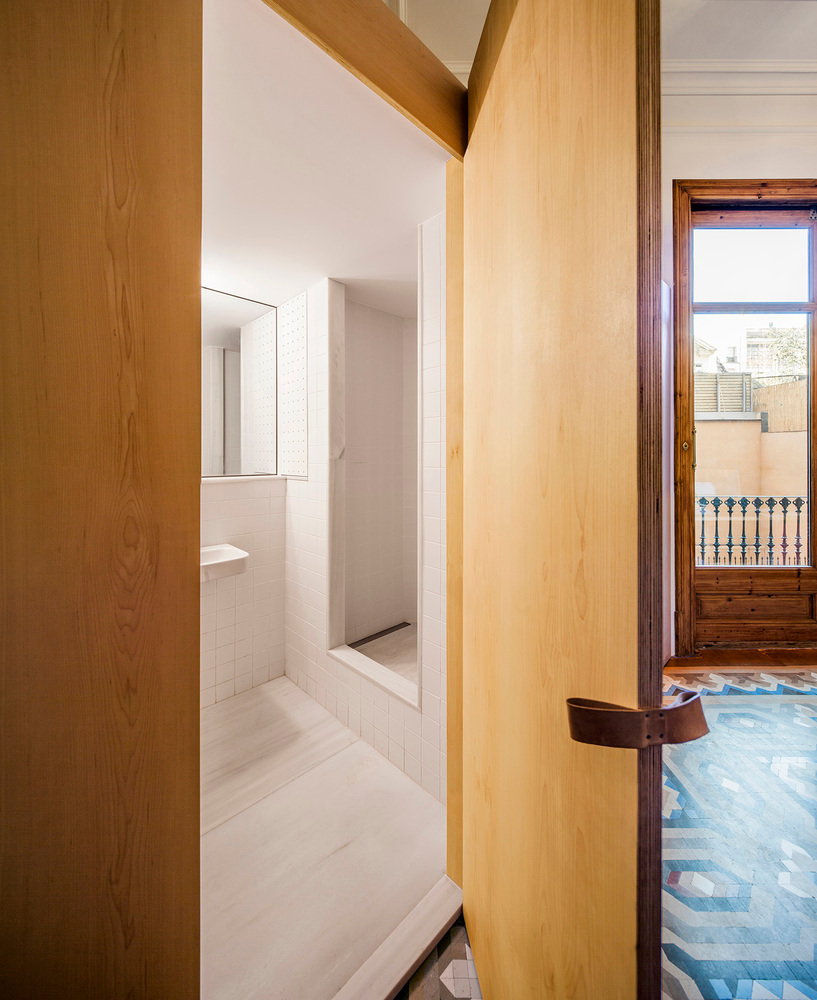 “The rest of the house is left practically intact,” say the architects. “The floors, ceilings, and carpentry that were kept in good condition are recovered to establish a careful contrast with the service furniture. A contrast that brings together both the two directions of the chamfer, and the two times of intervention in the history of the house.” 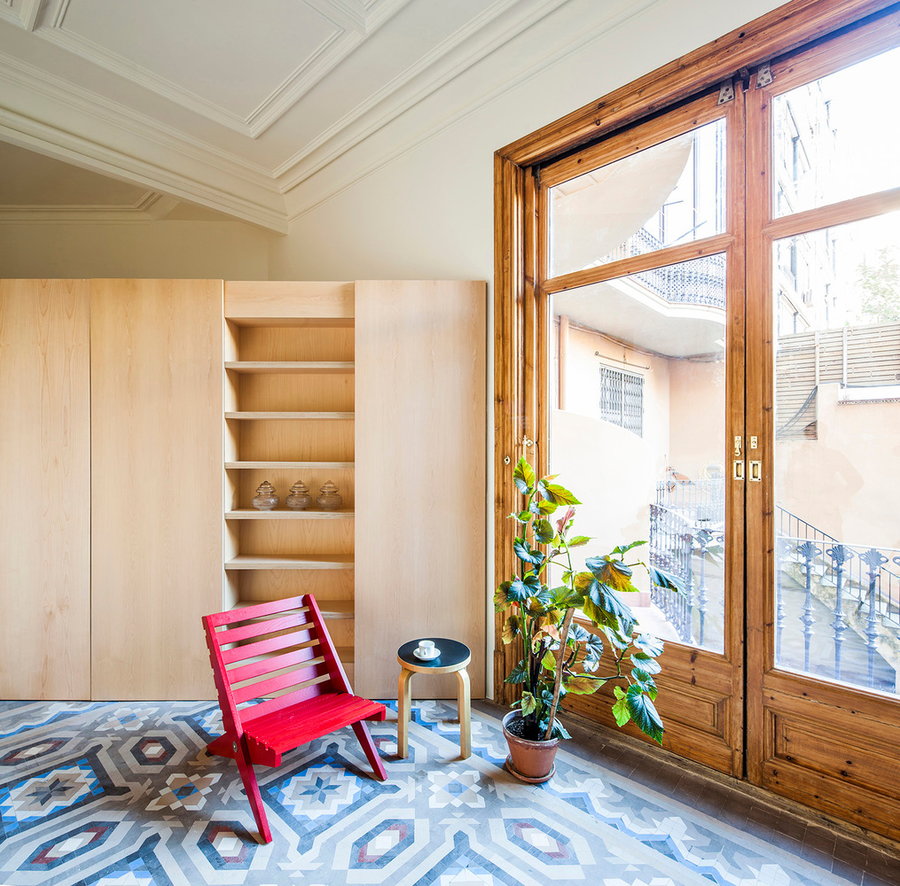 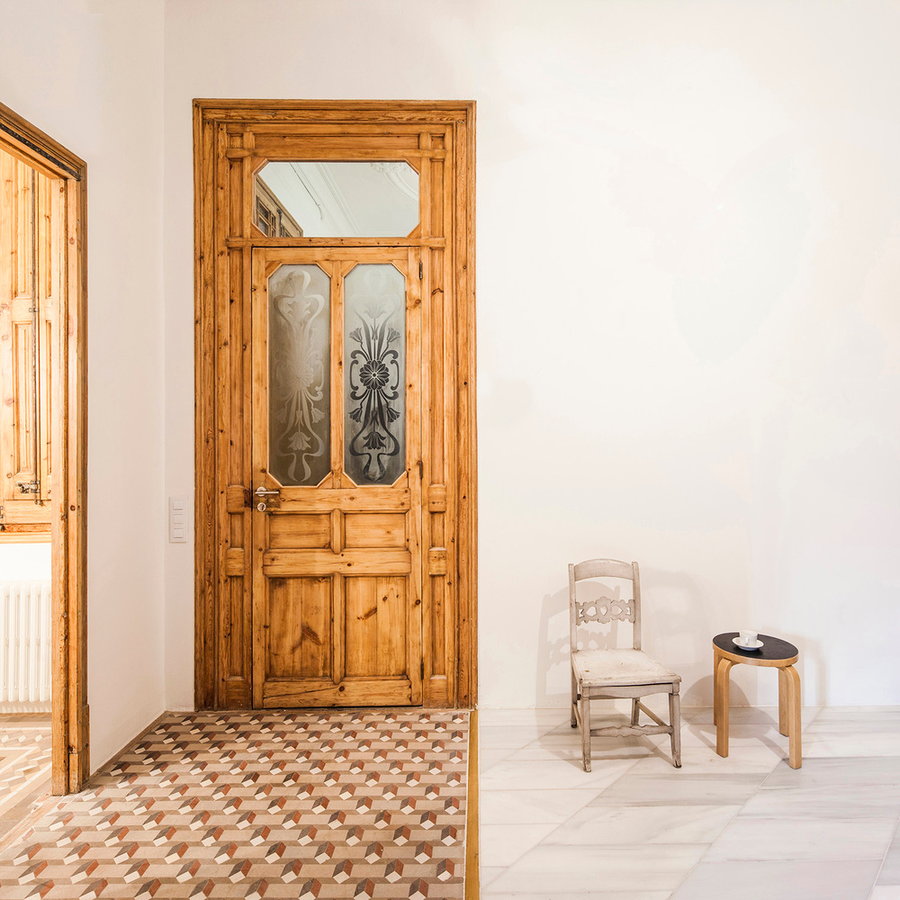 Even if the stairs of the cabinet don’t exactly lead anywhere, since there’s no loft, they still add an interesting graphic element to the design, as does their minimalist ceiling-mounted railing. The cabinet doesn’t just disguise all the little things that would otherwise create too much visual clutter, it anchors the whole apartment. Little design details like the leather pull on the bathroom door and ornate brackets on the mirror above the fireplace are just icing on the cake.