What is red, green, orange, brown, gray and invisible all over? Liu Bolin is beyond a master of disguise, his carefully constructed camouflage clothing renders him completely unseen even in urban contexts. 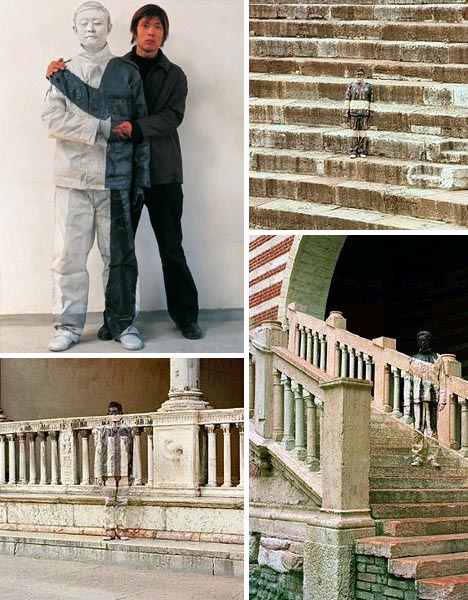 This artist has good reason to go invisible: the Chinese government has gone so far as to shut down his art studio in the past, making these photographs a form of protest as well as public artworks about displacement and hiding in plain site. Some of his pieces carry an overtly political message, featuring him in front of famous landmarks, national flags or in the grips of military personnel or party officers. Others are more subtle in their meaning and open to interpretation. From pants, shirts and boots to jackets, hats and faces, every inch of him and/or his subjects is painted in camouflage patterns. Whether standing in front of a shop, truck, wall, pile of rocks or combination of elements, they always disappear. Still not convinced? How long did it take you to spot the man in the photograph above? No, this is not a trick – but it might take a few seconds to a minute for you to find him, camouflaged from head to toe and hiding very much in plain sight.