It’s not often that a design studio’s portfolio is so rich with brilliant, playful, and memorable works that narrowing them down to a “best of” list feels next to impossible. But most design studios aren’t Nendo. This prolific multidisciplinary collective based in Tokyo consistently produces imaginative products, furnishings, art installations, and architecture with some kind of outside-the-box twist. You never quite know what to expect from Nendo, yet once you become a fan, you’ll find their work instantly recognizable whenever you see it. 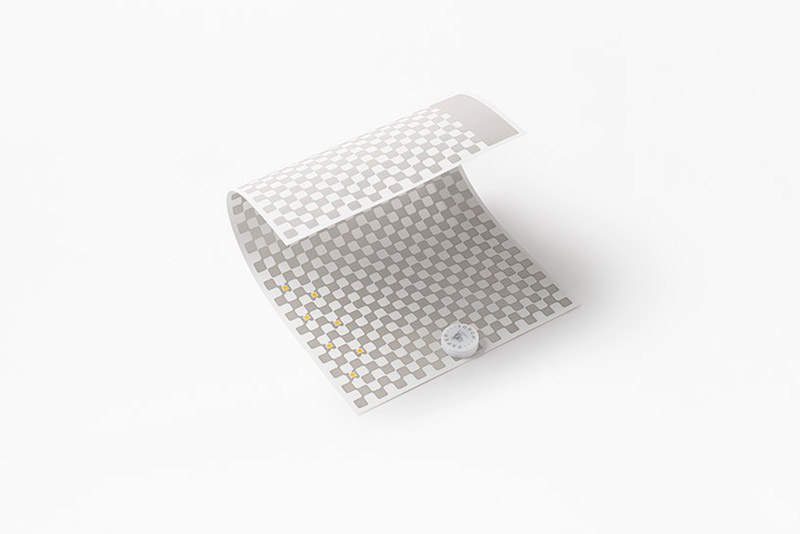 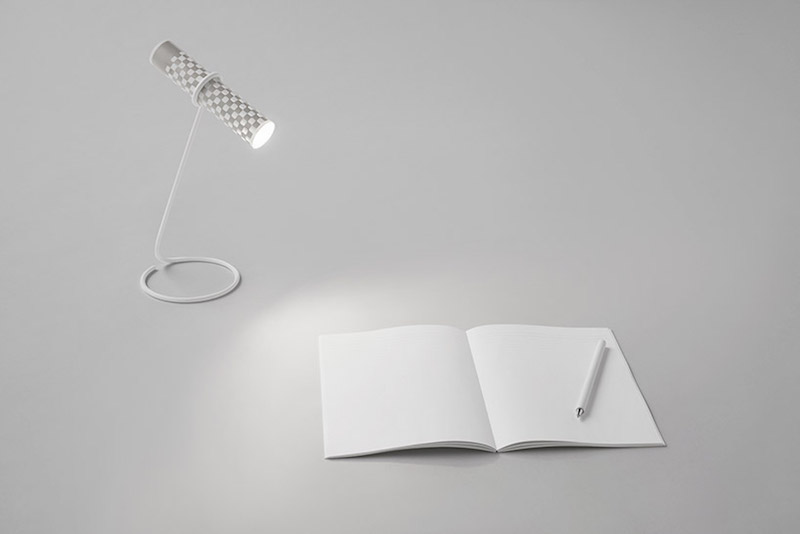 This little “torch” is made from electronic circuit boards that have been printed onto paper, plastic film, or cloth in a pleasing checkerboard pattern. Silver particle ink powers LED lights within, which themselves are glued onto the material with a conductive adhesive. The brightness of the light is controlled by how tightly you roll the paper. Its warmth, on the other hand, changes depending on whether you roll the torch with the LEDs facing inwards or outwards. 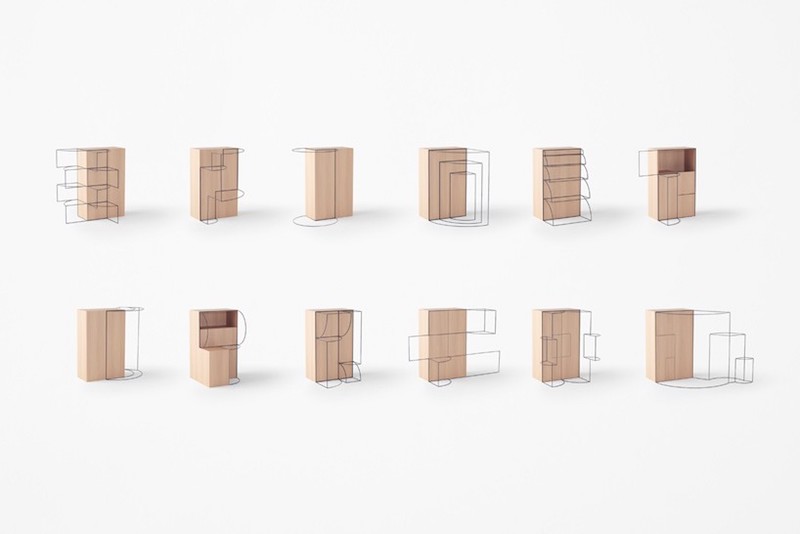 The Trace Cabinet collection seems to be in perpetual motion, even when it’s perfectly still, thanks to the “drawn” outlines tracing the movements of its many doors.

“Within the space we live there are items that ‘move,’” the company says. “They are furniture, doors, and windows — items that move in relation to our daily activities. Although they may not be visible, we are subconsciously aware of the ‘traces’ of their movements every day. For example, because of that, we do not put a vase in front of a door. It is essential for a person who specializes in space design to be even more aware of this, as they have to portray these ‘traces’ onto drawings. In the same manner, by visualizing such ‘traces’ in space, the various movement of a door attached to a simple cabinet was implied.” 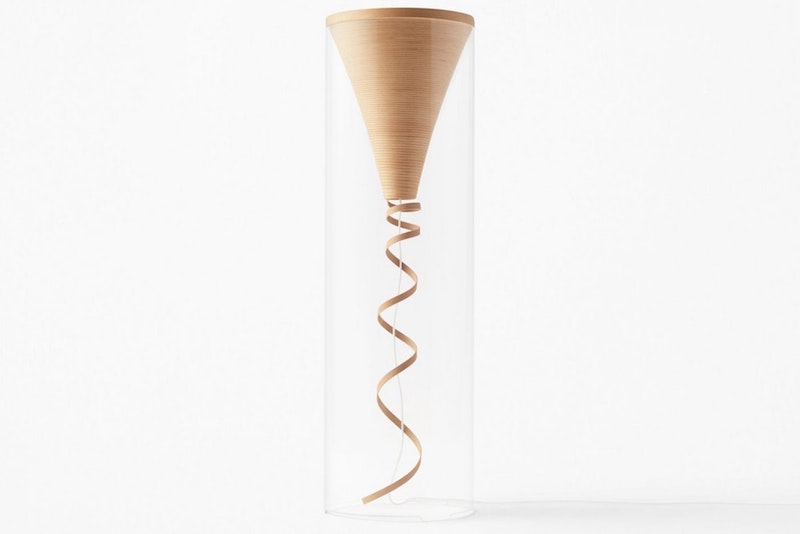 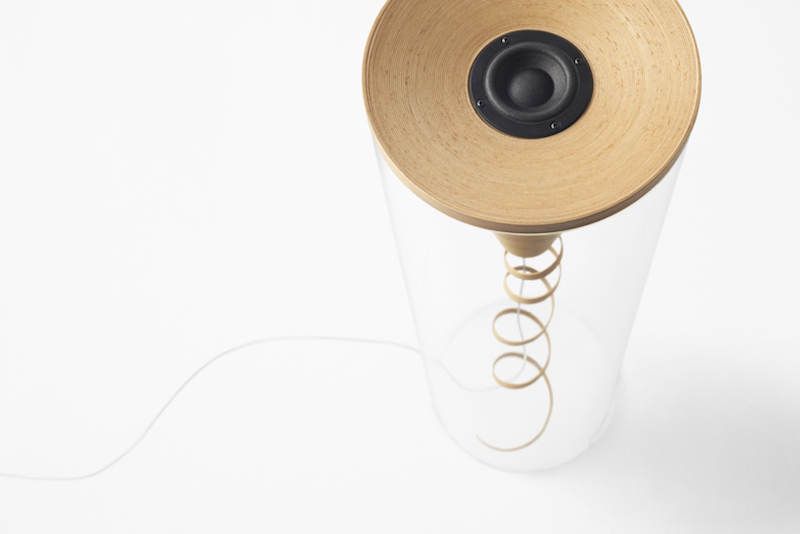 The acoustic properties of beechwood and empty vessels are explored in Nendo’s “Bunaco” speaker, a gadget that proves that electronics can sometimes double as art. A thin ribbon of wood winds around a small speaker within an acrylic vase, spiraling down to the bottom around a white power cord. The sound-absorbing qualities of the wood combined with this unique coil structure and the internal cavity of the vessel produce a remarkably clear and soft tone. This project exemplifies Nendo’s belief that modern electronics should be able to blend into your grandmother’s house, looking like a part of the decor rather than standing out for what they are. 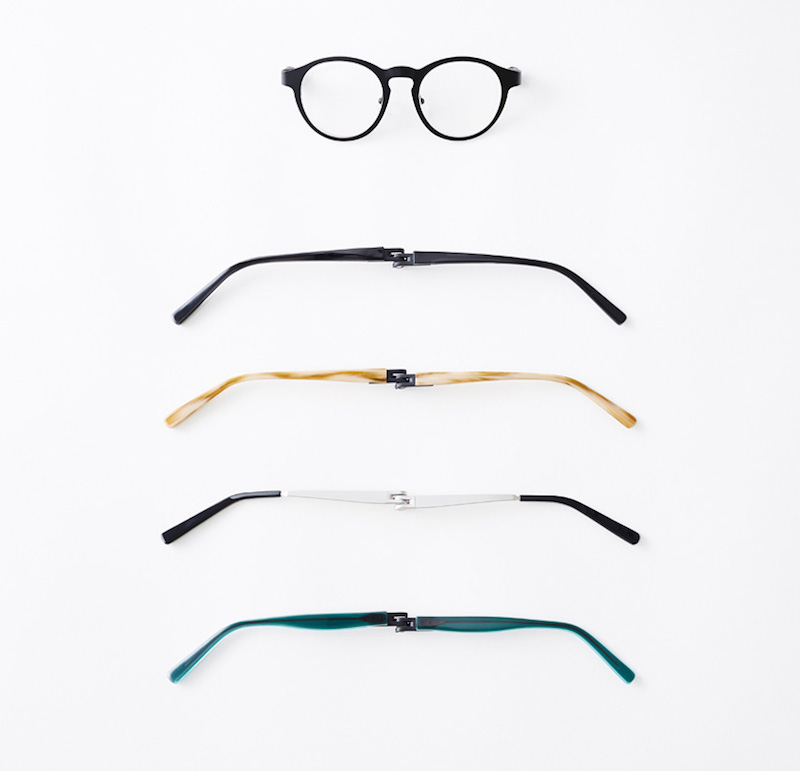 Raise your hand if you’ve ever lost a beloved pair of glasses because the hinge suddenly broke beyond repair. Nendo has a solution for that: replacing the screws in the hinges with magnets, which means that not only are the arms easily replaceable, but they’re also customizable. Imagine switching up the style and color of your spectacles or sunglasses as often as you wanted. The Magne-Hinge glasses sold exclusively at Seibu department stores in Japan in 2014. This is definitely one idea that needs to take hold across the entire eyewear industry. 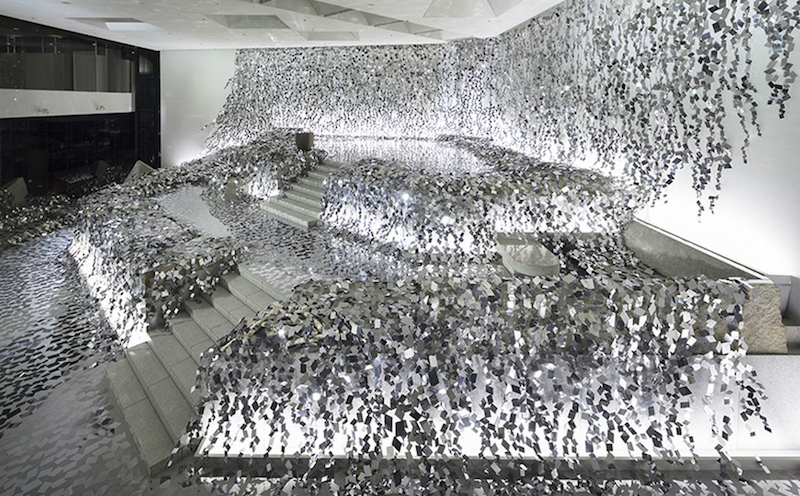 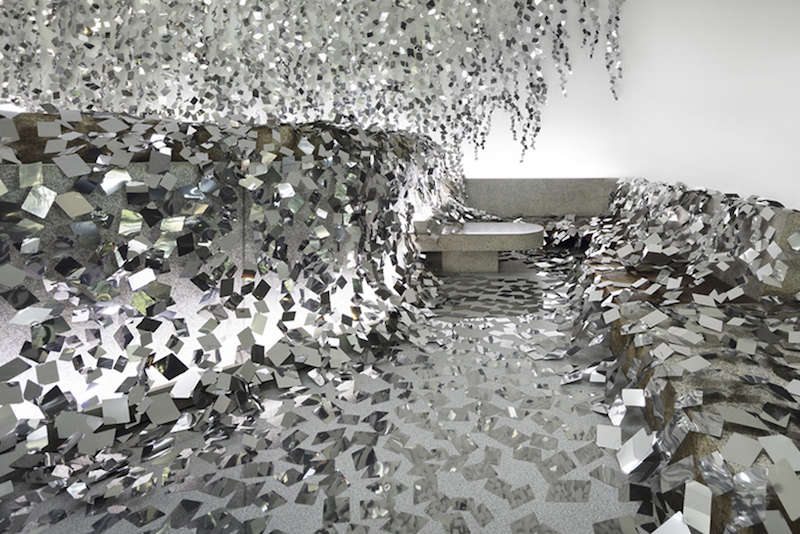 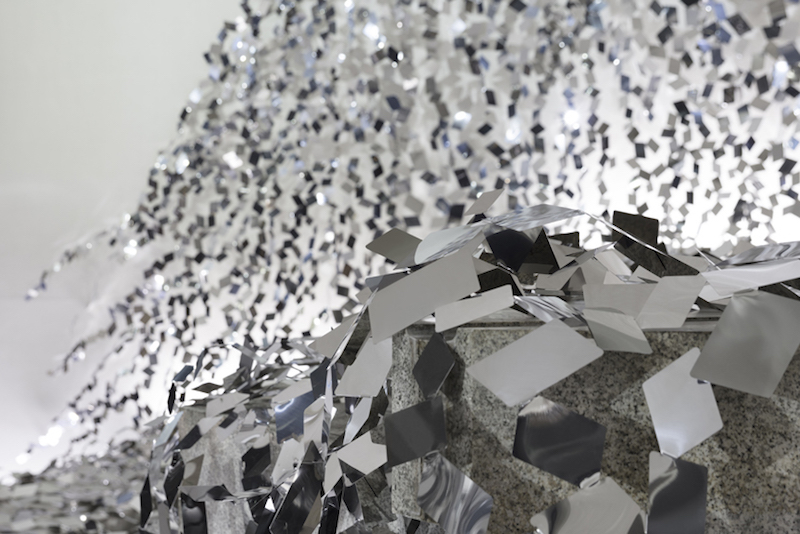 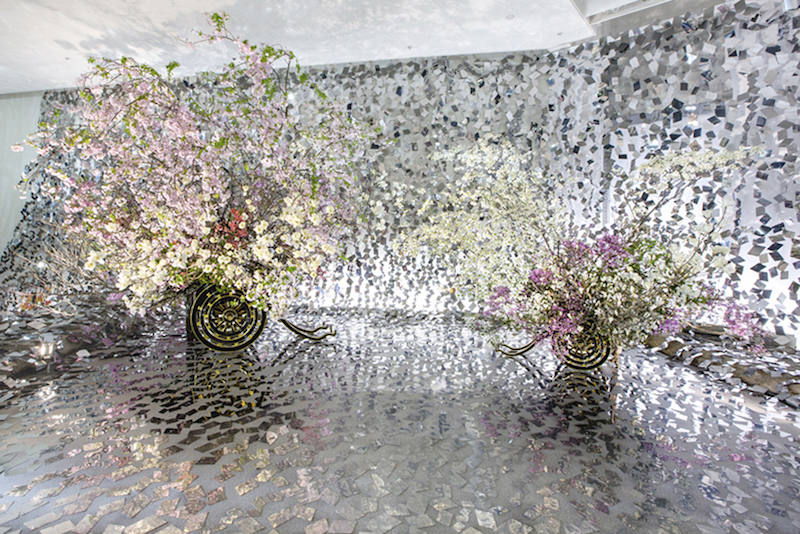 Created for a Japanese Ikebana school, the “Kaleidoscopic Ivy” installation sees strands of small diamond-shaped mirrors draped across an exhibition venue to spectacular reflective effect. Cut from stainless steel, the mirrors serve as a dazzling yet neutral backdrop for the school’s beautiful floral creations. Flowing down a series of stone platforms, the “ivy of mirrors” has an organic look to it, especially once it’s reflecting the colors and textures of the artworks around it. 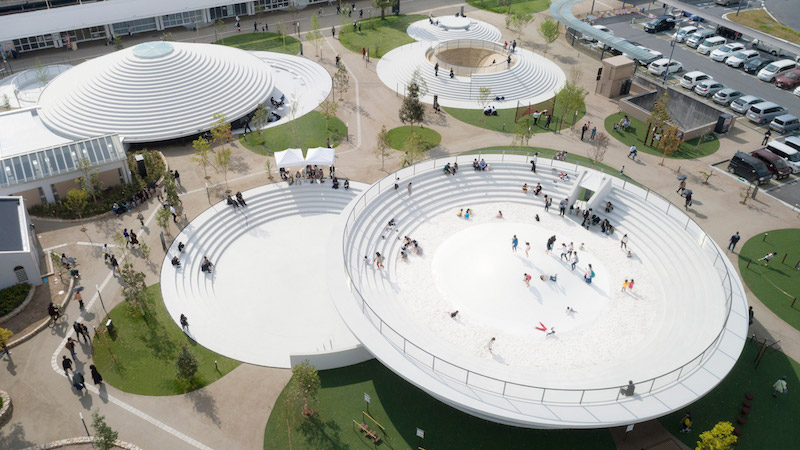 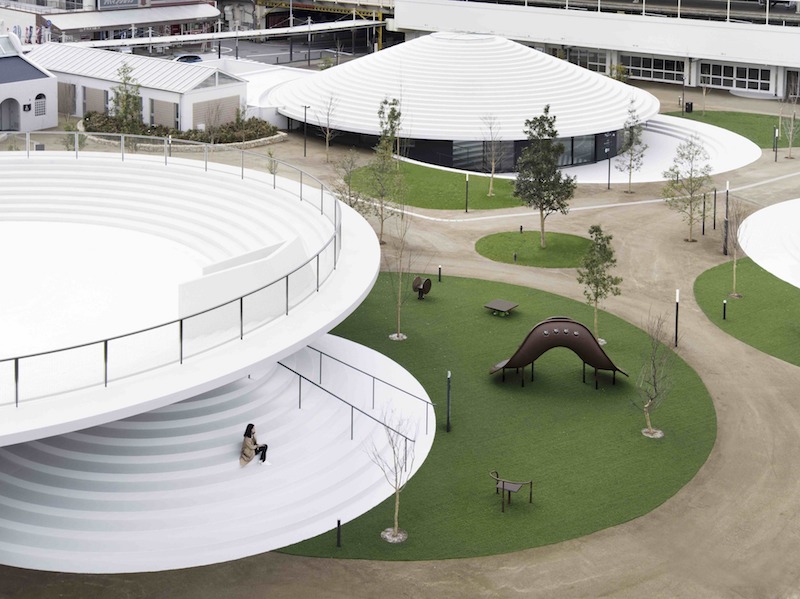 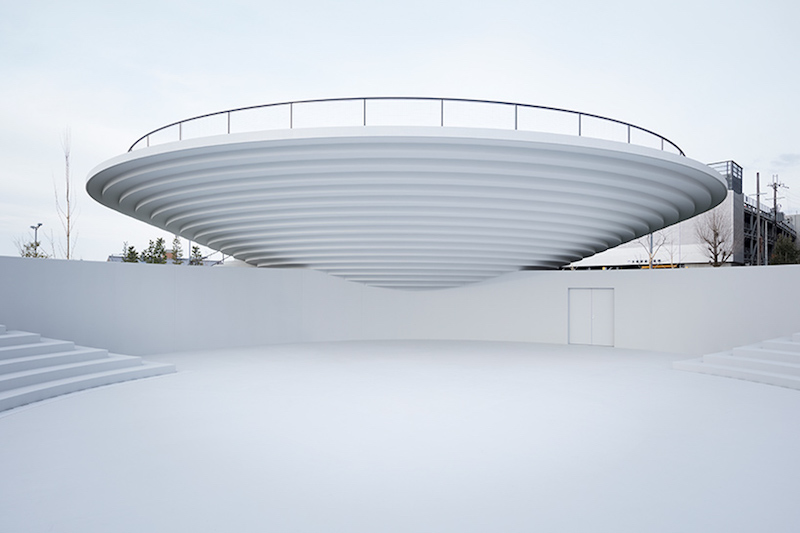 Nendo’s first public space is a series of stepped saucer-shaped structures, drawing inspiration from the ancient Japanese tombs known as “kofun.” Located in the city of Tenri, where many of the original tombs can be found, the “CoFuFun” plaza offers the public a series of cafés, playgrounds, and meeting spaces with both in and outdoor surfaces to climb. Arranged at various heights for different usages, some of these surfaces even boast inward-facing benches for outdoor concerts, while others have been equipped with outward-facing ones so that visitors can gaze out at their surroundings. “This variety creates an environment that encourages visitors to explore and spend time in different spaces within the plaza, rather than limiting their movement to one place.”