As wildfires intensify and seasons become longer, innovators everywhere are scrambling to find and implement new technologies to take some of the stress off first responders and save more people’s lives and homes. 2018 was a record-breaking year for wildfires across the US: Oklahoma lost nearly 600,000 acres of land, Nevada lost 1.1 million, and Oregon, Idaho, and Utah each lost a whopping 1.8 million. Still, California was by far the hardest hit, with the infamous Camp Fire becoming the deadliest wildfire in a century. 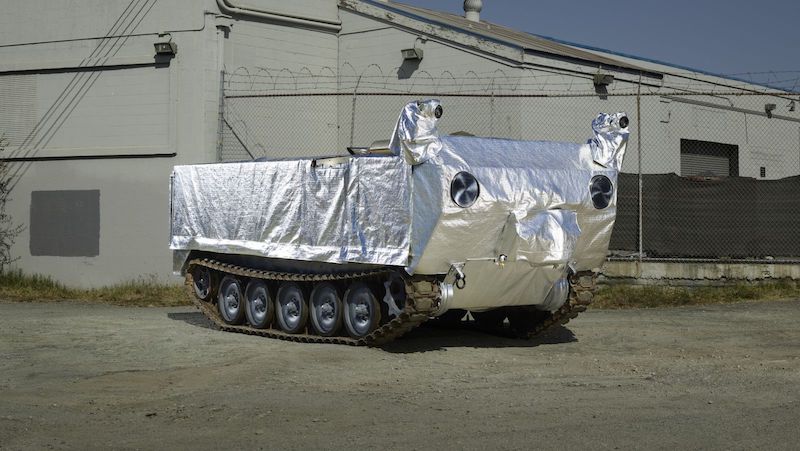 In hopes of alleviating some of this devastation, former MythBuster Jamie Hyneman has recently designed and built a brand new kind of driverless vehicle: a firefighting tank fitted with massive water containers that can be piloted remotely to roll directly into flames. 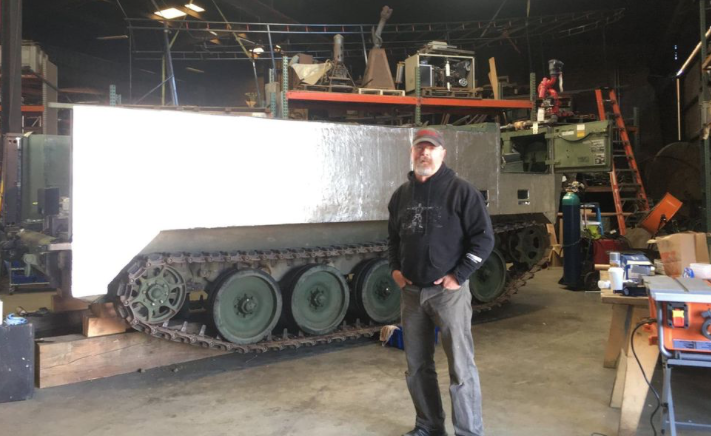 The idea for the remote-controlled, self-cooling, fireproof tank first came to Hyneman in 2003, when he was hired to build a soda-vending robot for a 7Up commercial. More specifically, he engineered a vending machine on tank treads that rolled up to people and aggressively shot cans of 7Up at them. Those tank treads made him think “surface area” and eventually turned his attention to fires. His next idea was that the treads would be continually doused with water as the tank rolled over the flames. That engineering began with a M548 tracked cargo carrier that Hyneman bought in 2017, which, at 14,500 pounds, is still light enough to be relocated via airlift.

By 2015, Hyneman was working on a prototype. Financial backing came in 2016, when he met Palmer Luckey at a venture capitalist’s picnic. Luckey is the founder both of Oculus VR, which he sold in 2014 for $2.3 billion to Facebook, and Anduril Industries, an innovative outlet for defense contract projects that apply virtual reality. To prep the tank for Anduril’s technology, Hyneman brought on Jim Newton — an advisor on MythBusters who went on to found the TechShop maker spaces — to devise, program, and build a network of necessary sensors and microcontrollers. 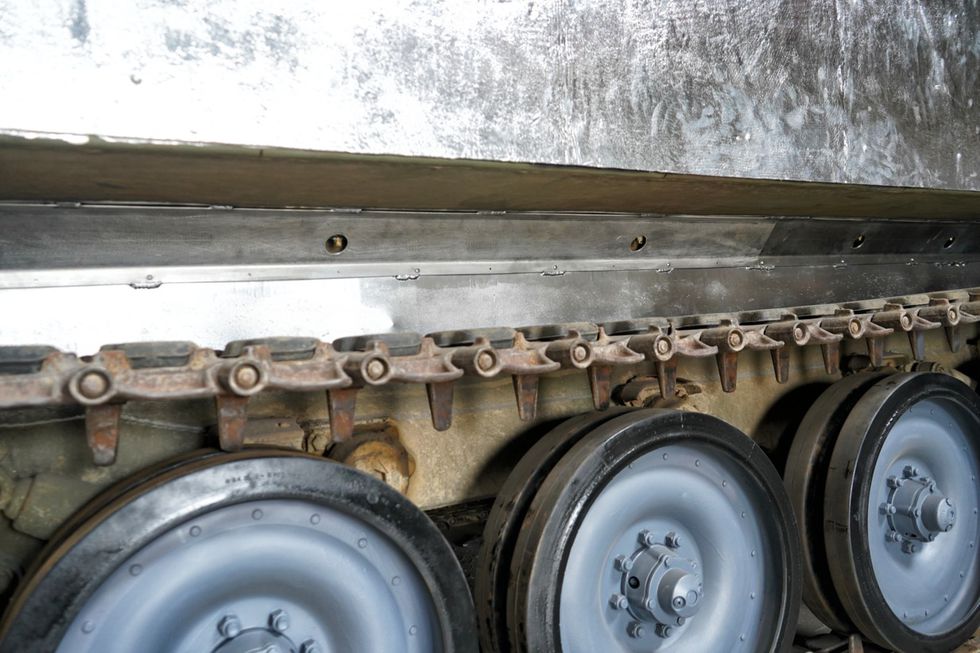 “When you have instead of a truck a tank and instead of a driver a remote pilot, you can charge through the wall of flames,” says Luckey. “You can crush smoldering debris like tinfoil.” That may sound like an awesome vision, but solving the problem of fireproofing a tank filled with wiring, servopneumatic valves, batteries, sensors, and pumps requires even more new solutions. 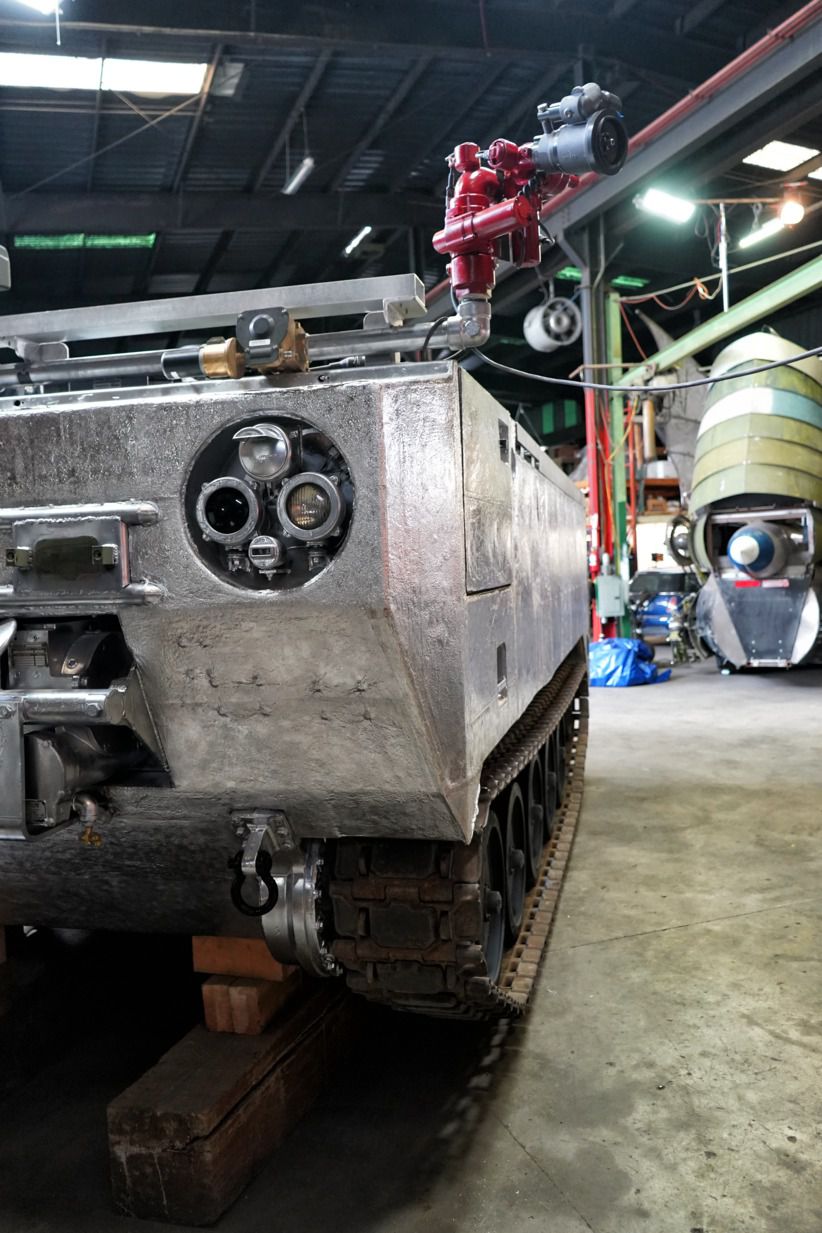 Cue the incorporation of a rainstorm inside the tank. A 50/50 coolant mix of glycerin and water sprays down the entire interior continually, draining down into a bilge and transferring its heat to the thousand gallons of water in the tanks. It can then be pumped back up and continually reused. of course, the tank is also meant to carry people. “If you go in here to get rescued,” Hyneman says, “you come out like you’ve been in a spa.”

In late September 2018, Sentry arrived at Anduril HQ in Orange County, California, to work out the VR kinks and begin field tests. According to Luckey, Sentry will eventually drive autonomously using Anduril’s Lattice AI sensor networks. Remote operation will make full use of VR, with sensors streaming views of the area to firefighters’ headsets and smartphones.

Hyneman remains cautiously optimistic about the project, stating: “It’s conceivable that [Sentry] would be autonomous at some point, but then it’s conceivable we’ll have people on Mars before long, and that AI is going to do us all in. That may well happen but not right now. The fires are right now, and remote control is right now.”