Rising out of the forest on several wooden stilts, an unusual modern treehouse looks down at the lush landscapes of South Africa’s Cape Town. Designed by the local firm Malan Vorster Architecture and Interior Design, the “Paarman Treehouse” was not really built around a tree, as much as it might resemble an organic growth that sprouted up out of the ground. Two cylindrical towers protrude from its facade, both covered in timber slats and glass window panes that glitter in the sunlight. 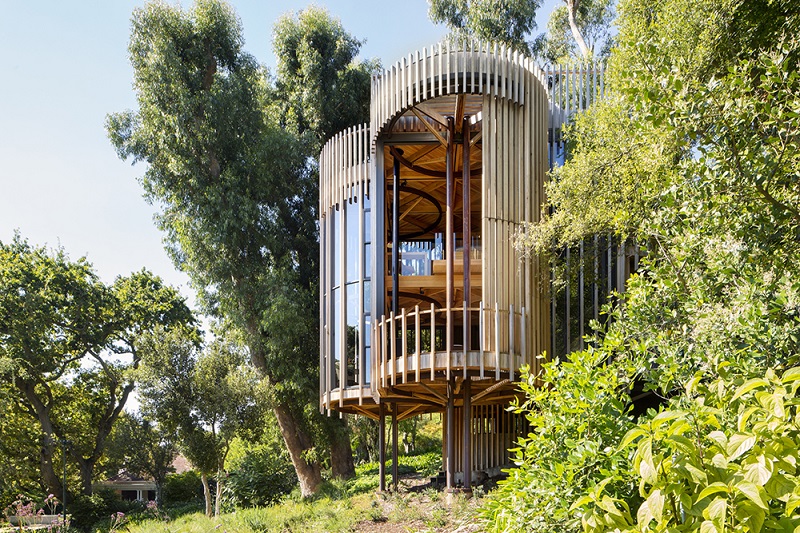 The treehouse’s elevated design recalls the complex arrangements of play structures found in backyards and playgrounds and gives it an air of youth and innocence. The clients commissioned the architects, who had previously worked on some of the neighboring buildings, to capture the feeling of a children’s secret treehouse in an elegant and contemporary way. Ultimately, they created a serene, cabin-like getaway. 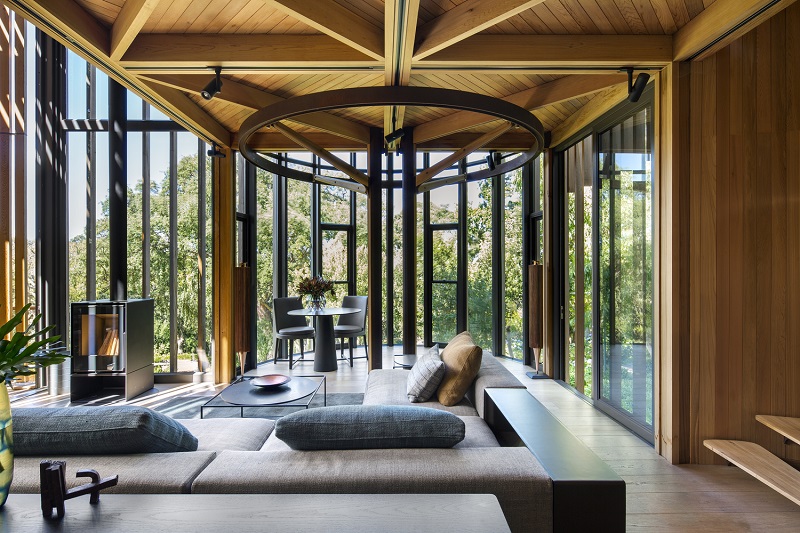 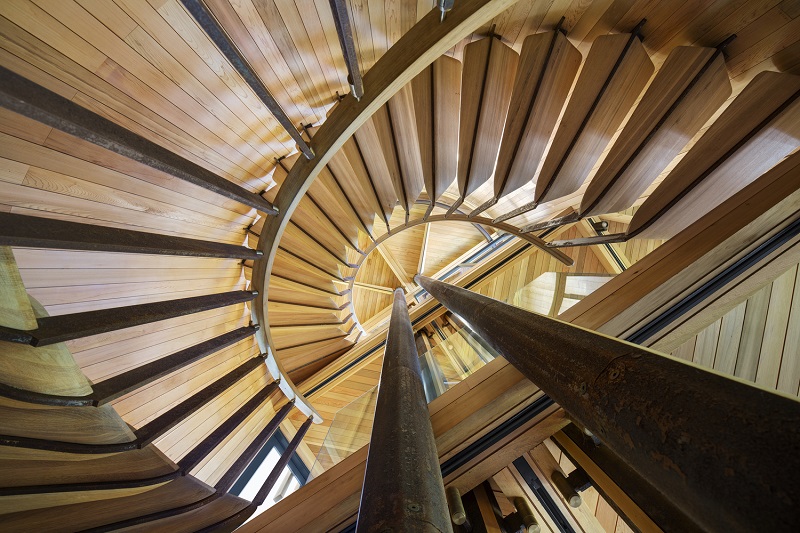 Paarman Treehouse bears three especially striking features: its unconventional shape, its operable glass panels, which can open to expose the entire interior to the outdoors, and its focus on the kind of craftsmanship you’d expect to see in analog toys and industrial furniture. The home is four stories high and contains a lot of space that opens all the way up to the ceiling, creating a cathedral-like atmosphere that could make anyone forget the house only had a single bedroom. 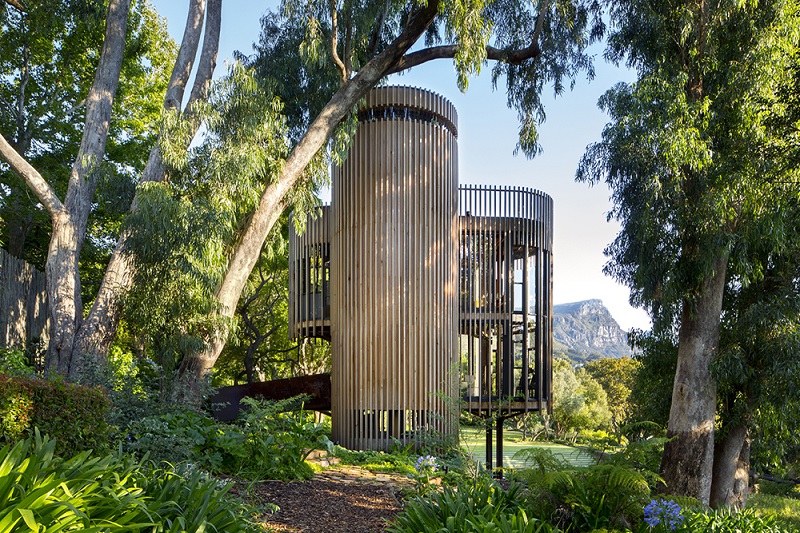 A rusted steel ramp leads up to the home’s entrance and into the living room, where visitors are immediately greeted by a set of massive floor-to-ceiling windows. Upstairs, the lofted bedroom boasts a sleek glass railing to allow residents the fullest possible views of the surrounding countryside. A lot of the Paarman Treehouse’s warmth and character comes from its incorporation of western red cedar. In terms of layout, the treehouse consists of four modular cylinders arranged around a central square shape. 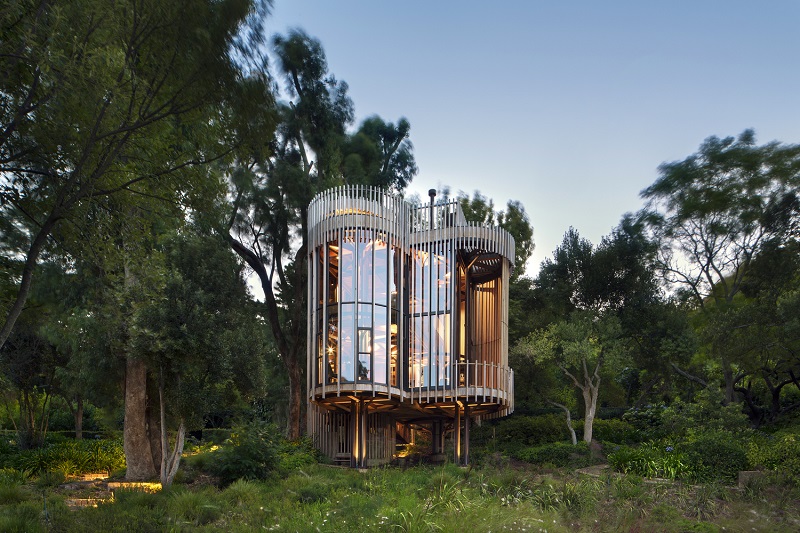 “The organizational diagram of the structure explores the pure geometry of a square, with each side divided into three modules and where two of these modules determine the diameter of a circle on each of the four sides of the square – resulting in a pin-wheel plan layout,” explain the architects, “A square is directional and a circle is not – the square relates to the North/South site geometry and the four circles to the organic and natural surroundings. Each circle’s center is the location for a column, and circular rings, supporting the floor beams above, are connected to the columns by means of branch-like arms. Each ring circumscribes a half-round space ancillary to the main square living space on that level.” 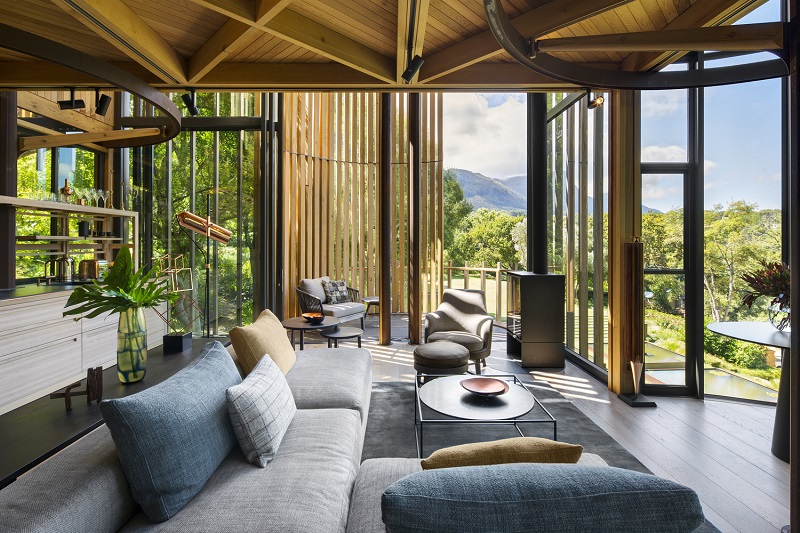 Inside, the top of each cylinder has been adorned with a steel circle that intersects the home’s wooden beams for a beautiful geometric effect. The treehouse’s layout also resulted in the creation of a few half-round bays, which respectively contain a patio, dining alcove, and staircase on the first level and a bathroom and bedroom on the second. The cylindrical theme continues all the way up to a spacious rooftop deck, which was designed to reach the height of the surrounding treetops at its highest point.