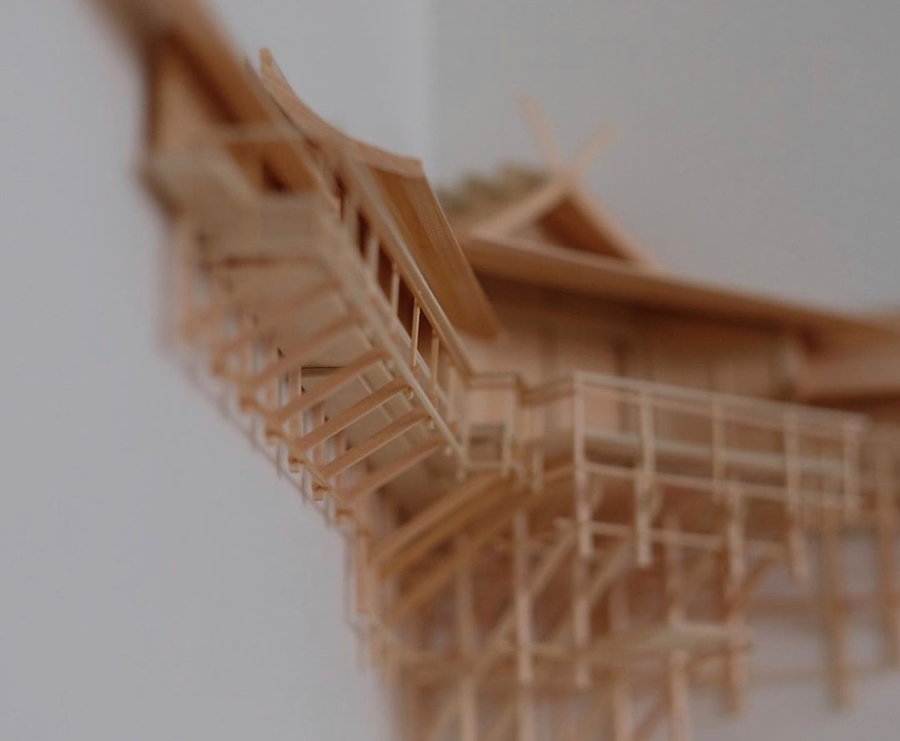 Among Japan’s most beautiful vernacular architecture, Shinto shrines are considered the dwellings of the kami, the Shinto gods. While the full-sized shrines draw visitors to marvel at their beauty, pay respects to the kami, and pray for good fortune, miniature versions called kamidana offer a way for individuals to invite the kami into their homes. Translating literally to “god/spirit-shelf” in English, kamidana are usually placed high up on a wall and used to display items related to Shinto-style ceremonies, like shintai, which are objects that house a chosen kami, giving it a physical representation to worship. 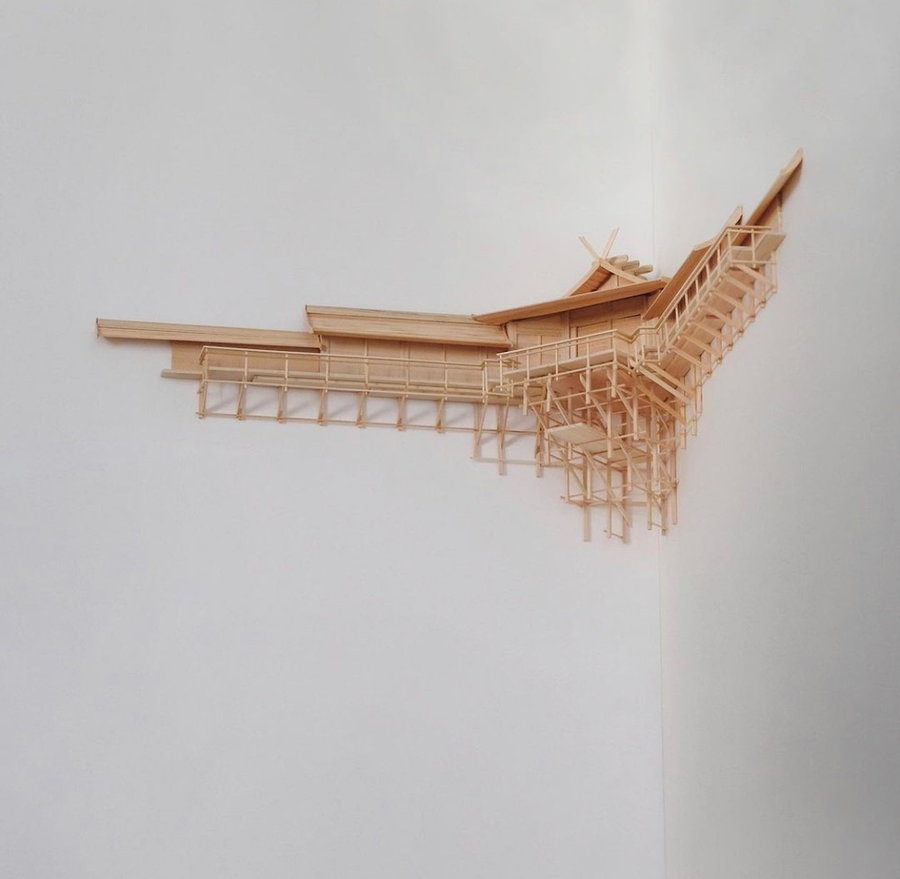 While traditional kamidana vary from small and simple shapes to more ornate shrine reproductions, architect Naohiko Shimoda has created a pair that are a bit more contemporary in style. For the latest one, Shimoda used incredibly narrow lengths of miniature lumber to construct a minimalist structure with a complex framework underneath it, almost as if a Shinto shrine were elevated on stilts to take advantage of a beautiful view.

Presented on Instagram, the bespoke miniature shrine is just as fascinating in tightly-framed detail views as it is taken in as a whole. In some of Shimoda’s older Instagram posts, he shows off architectural models he’s built for his full-scale projects, and you can see a similarly complex structure underpinning his boxy modern designs.

This is the second such miniature Shimoda has custom-designed for a client. In 2018, he created “Kamidana in the corner,” a shrine that fits an outer corner rather than an inner one. Both designs take on more of a symbolic and decorative role than the shelf-like type of traditional kamidana that’s capable of supporting objects, but there’s still something powerful about the delicacy of their construction. The almost toothpick-thin supports give them an appearance of transience, as if they might pick up and leave in the night of their own volition. 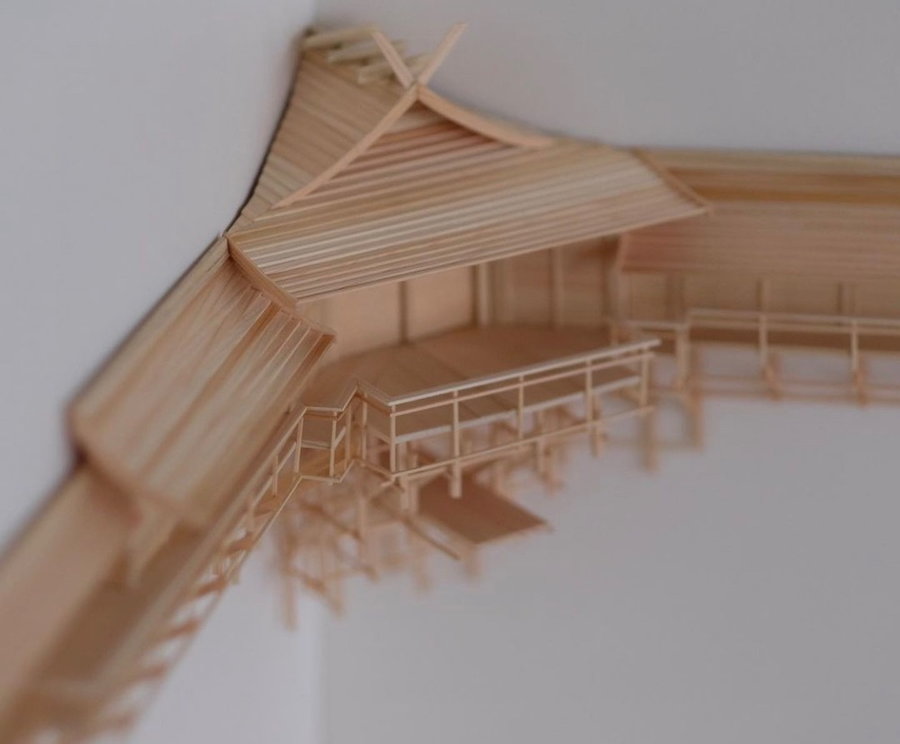 “In general, architecture is too large, so we design using the concept of ‘scale.’ However, there is no scale on the kamidana,” Shimoda says. “Although the figure looks like a miniature, it always appears at a scale of one-third. The purpose of the kamidana is to build a company in the house, and there is a practical aspect that it must be a small company for that purpose. However, because it is a small company and a company that humans cannot enter, there is a sense of scale that is a method (maniella) peculiar to kamidana that has escaped from the human scale.” 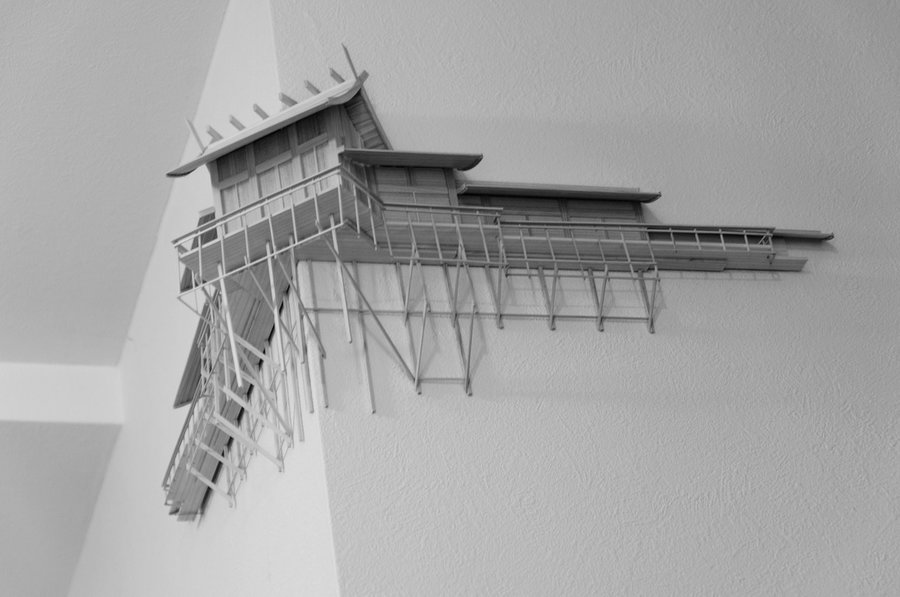 “As a result, the driving force that determines the design is purely the details that create the beauty and corporateness of the proportions. This time, the proportions of each part are based on the aspect ratio (1:10) at which the architecture reveals its commemoration, and the details incorporate elements of temples and shrines nationwide. This is because a certain sense of déjà vu is important for the kamidana (= company). When a person prays for something, he or she needs a yorishiro to accept that thought. At that time, yorishiro needs some kind of production that makes it easy for people to think about it. The déjà vu effect used this time is a receptor that accepts the thoughts of those who pray.”