A whole new neighborhood full of gleaming white structures and lush vegetation is set to take up 73,500 square meters in the city of Nice, France. “Joia Méridia” is a stunning mixed-use project coordinated by French architecture firm Lambert Lénack and designed by a multidisciplinary team from all around the world. Arguably the most striking of all the structures in this complex is Sou Fujimoto’s “Méridia Tower,” a high-rise comprised of wavy stacked planes and perforations that let sunlight filter down to the ground level. 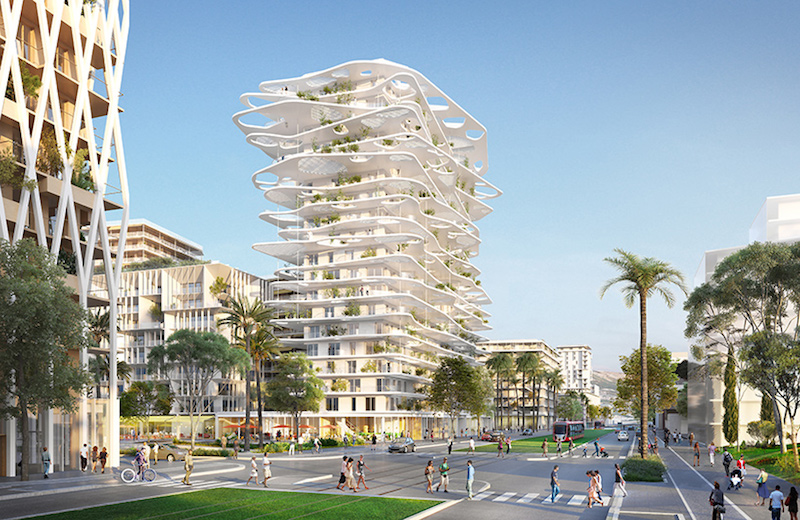 The complex will be built on a currently vacant plot of land in West Nice, and it’ll be serviced by an as-of-yet-unbuilt rail line that will whisk commuters to and from the city center in a matter of fifteen minutes. It’s envisioned as a modern reinterpretation of Nice’s classic town squares. At its heart is “Méridia Plaza,” a sunny gathering place full of palm trees offering views of all the surrounding architecture. Landscape architect Alain Faragou will also be working with Roland Carta to develop a verdant “Patio” full of rocks, trees, and a water feature. 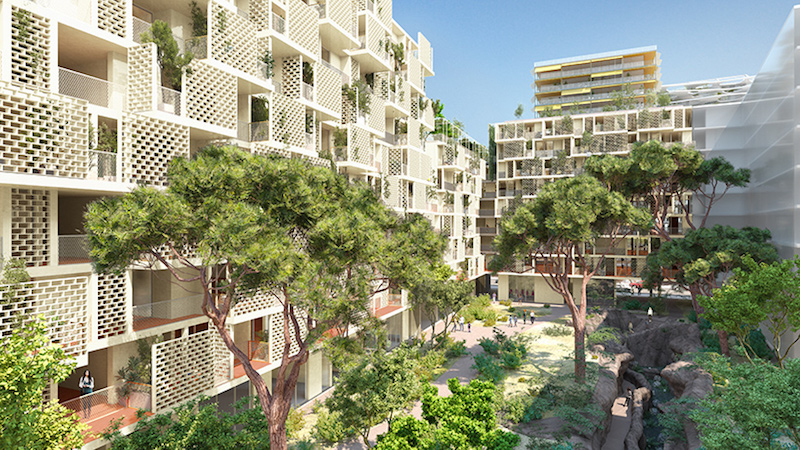 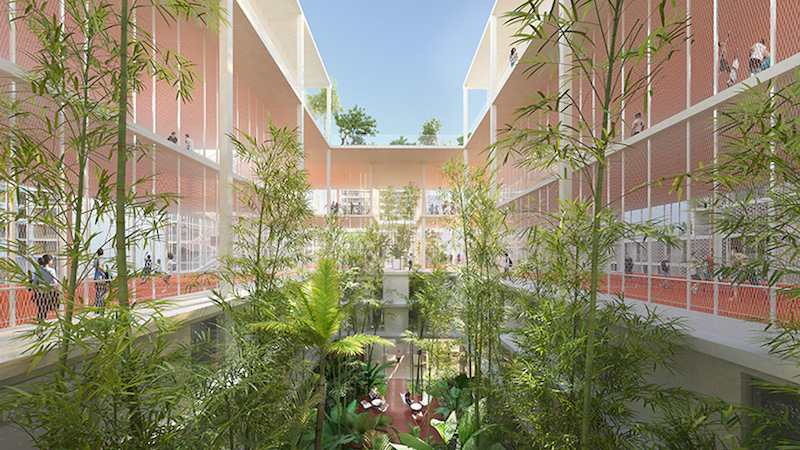 One video (in French) offers an animated look at the concept art for the project:

The curves of Fujimoto’s organic Méridia Tower stand out among all of the other structures’ highly geometric forms and grids. Each plane resembles an artist’s palette that’s been punctuated by thumb holes meant for giants. Vegetation grows from each one of the building’s deep terraces up through these holes to help shade the facades. Because of this, the tower’s residential balconies are well protected from the sun but still get to enjoy incredible views of the city. 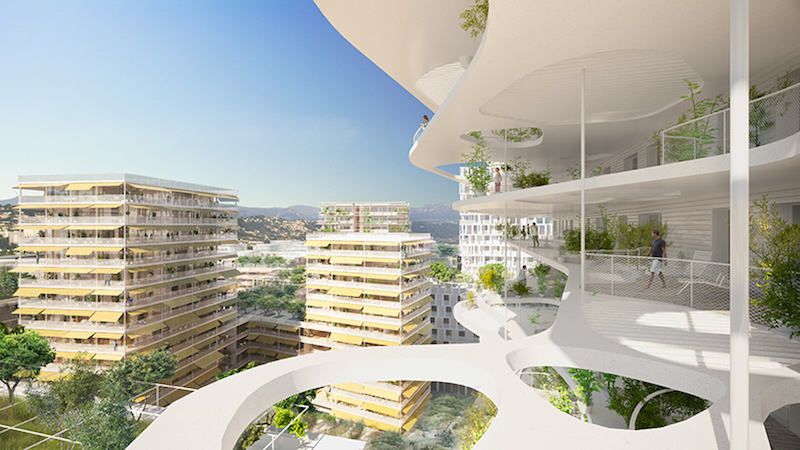 The Joia Méridia proposal gained public attention after winning a competition to design a complex on the land with high standards of sustainability, innovation, social interaction, and urban vitality in mind. Mixed-use programs are organized around attractive, vibrant public spaces to encourage a healthy, walkable, and enjoyable urban experience. 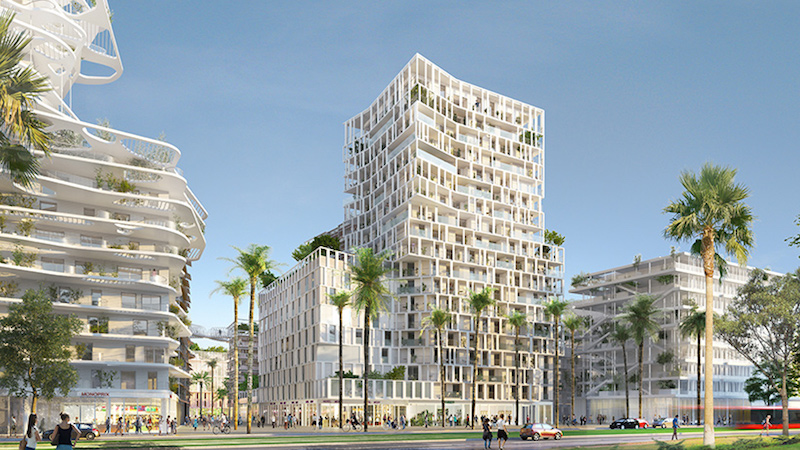 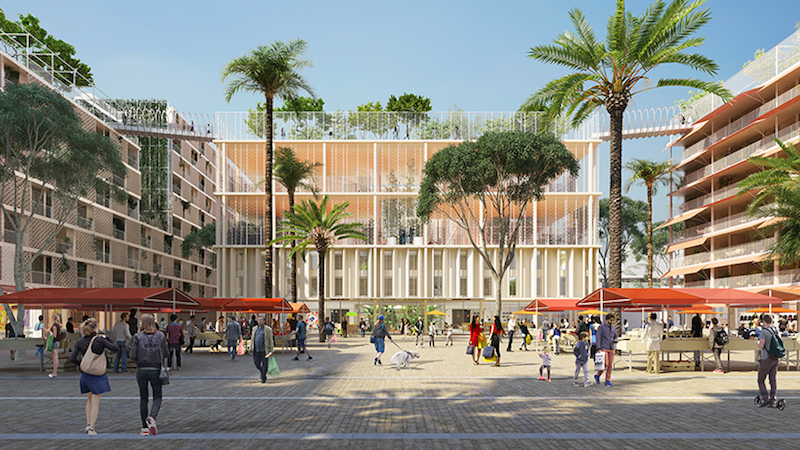 The complex will also boast an aromatic plant garden, an experimental garden, and a 2,000-square-meter (about 21,500 square feet) vegetable garden. The project’s main theme is “freshness,” as exemplified by all these islands of green and the integration of plants into the buildings themselves.

The development, which also includes designs by architects Laisné Roussel, Cino Zucchi, Chartier Dalix, and Anouk Matecki, will cost about €275 million (roughly $336.5 million) and take about six years to complete, with the first structures being expected to open in 2021. 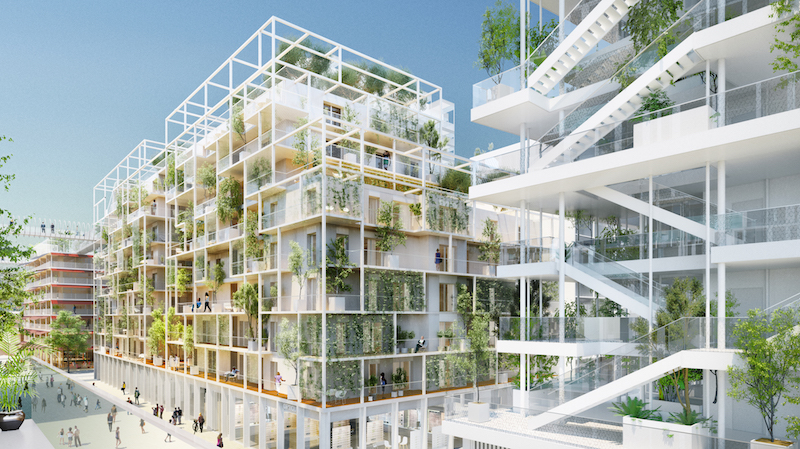 “The macro lot ‘Destination Méridia’ focuses on the realization of the programs constituting the heart of ZAC Nice Méridia,” says Lambert Lénack. “The operation is organized around the public spaces and shops of centrality of the future district. It aims to create an attractive polarity, lively and of great urban and architectural quality. This mixed program is roughly distributed as follows: 75 percent of housing, 10 percent of businesses, 12 percent of hotels-para-hotels, and 3 percent of tertiary-services. [It will] also include the realization of a parking offer accessible to the public, beyond the need of the programs [being built there].”