Opening your cooler to find a soggy mess at the end of the day is pretty much inevitable when you’re packing anything more than drinks into it. Soft foods like sandwiches get squashed, melting ice infiltrates your bags and containers to render food inedible, and everything else in the cooler ends up smelling like old hot dogs. Not exactly appetizing, huh? Oh, and if you’ve got a lot of stuff in a large cooler, fumbling around for a particular item just makes the ice melt faster.

Some kind of organizer that keeps certain foods up out of the ice seems like an obvious way to solve the problem, but somehow, few such products actually exist. The JOEE, which takes its name from baby kangaroos, is looking to change all that.

The JOEE’s designers deem their creation “the ultimate hard cooler organizer,” consisting of a simple plastic insert that sits above the main ice compartment of your cooler to keep certain foods separate and protected. Cans and bottles are heavy and can end up smashing the more delicate items, so the JOEE gives them their own little upright compartment, holding six 12-ounce cans or three bottles. There’s also a section for clean, hygienic ice storage for your drinks and — perhaps most crucially — a dry food storage area. This section of the JOEE cooler organizer lets foods prone to sogginess stay chilled without directly touching any ice, holding up to nine sandwiches at once. 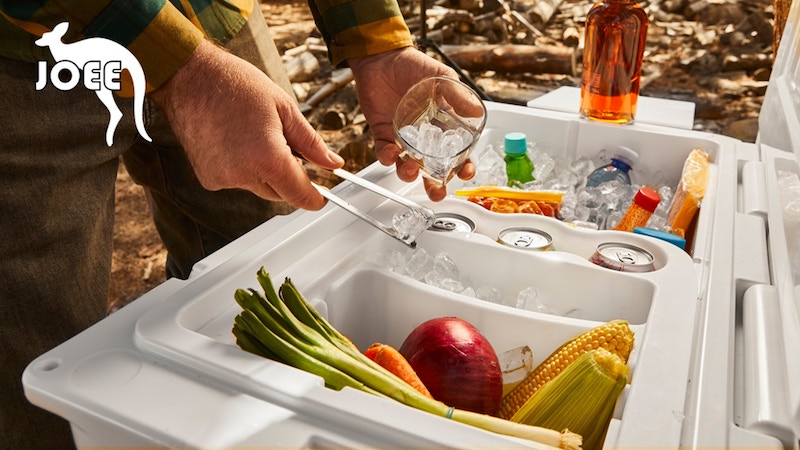 Made of impact-resistant BPA-free plastic, the JOEE also boasts a lid that doubles as a clean cutting surface, and test runs by its makers show that it keeps ice cold 13 percent longer than usual, even in high performance YETI coolers. Since it’s modular, you can leave your heavy cooler outside and just bring in the organizer to pack your foods and drinks. Then at the end of the day, just run it through the dishwasher.

The JOEE doesn’t just fit YETI coolers. It also works with a wide variety of models from Grizzly, Igloo, Coleman, Cabela’s, Canyon, Orca, Pelican, and more. If you want to determine whether it’ll fit your cooler, just make sure the bottom of the inside measures at least 9-and-3/8ths inches wide, the inside top measures between 10-and-3/8ths and 13 inches wide, and the interior depth is at least 8.5 inches. 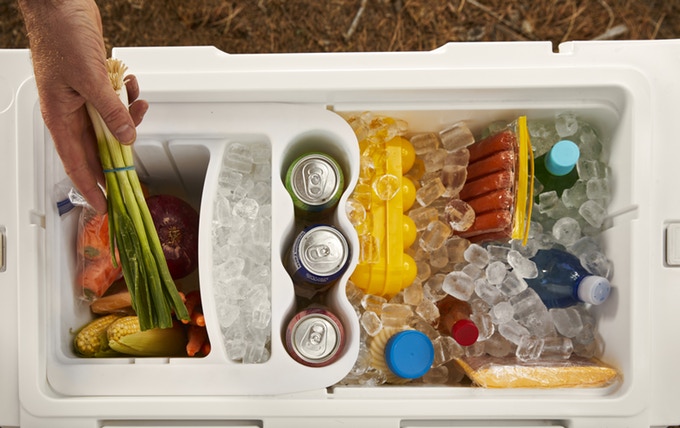 “Over the years, high-end coolers have evolved to become bear-proof, virtually indestructible, and to keep ice cold for as long as 10 days. But when it comes to food storage, most of the advanced coolers are still just an empty box. JOEE is changing that.”

“Imagine off-roading in the backcountry with a cooler in tow, knowing that the food you brought along is safely stored right where you put it. JOEE secures your food inside your cooler and protects dry ingredients from melted ice. Now, your cooler can be just as awesome on the inside as it is on the outside.” 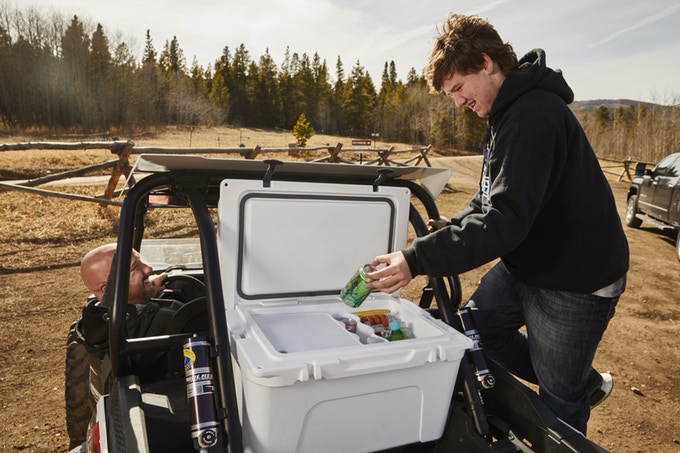 The JOEE cooler organizer just completed a successful Kickstarter campaign. Backers will start to receive their products in November 2018, and it’ll likely be made available to the public around the same time. The JOEE is designed and manufactured in Colorado.