Matali Crasset isn’t afraid of a little color — or a lot of it. Over the years, the French designer has become known for playful shapes and vivid hues, taking inspiration from a broad range of sources like traditional crafts and electronic music. So when she was approached to renovate the ninth-floor Parisian apartment of Michéle Monory, founder of the experimental collaborative jewelry studio Le Buisson, Crasset produced exactly what you’d expect: a fun set of absolutely unique interiors. 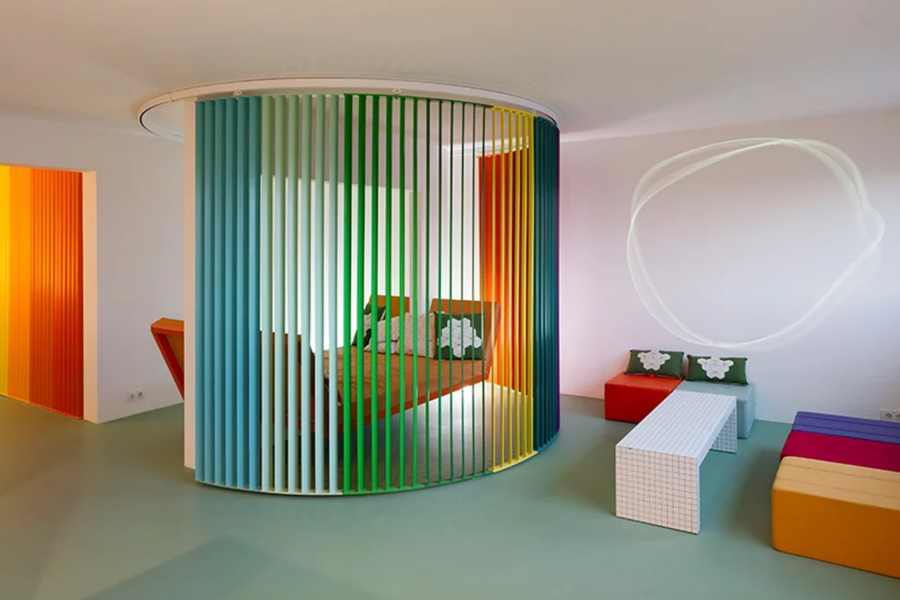 The pair had already worked together more than once. Crasset previously produced a set of rings for Le Buisson, and back in 2014, she transformed a stone farmhouse in the heart of the forest near the Chinon region that Monory had inherited. It’s clear from the results of the 2019 project “Le Rainbow et le Bousquet,” which means “the rainbow and the woods,” that they’ve developed enough of a rapport for Crasset to unleash her creativity at full blast.

Monory gave Crasset free reign to do whatever she wanted with the 861-square-foot space, which originally had a conventional layout with an entryway, two bedrooms, a living room, and a kitchenette. Naturally, Crasset wanted to start completely fresh, focusing on a sense of openness, natural light, and a full spectrum of color. The space also had to be multifunctional, serving as both a home for Monory and, occasionally, a showroom for Le Buisson. 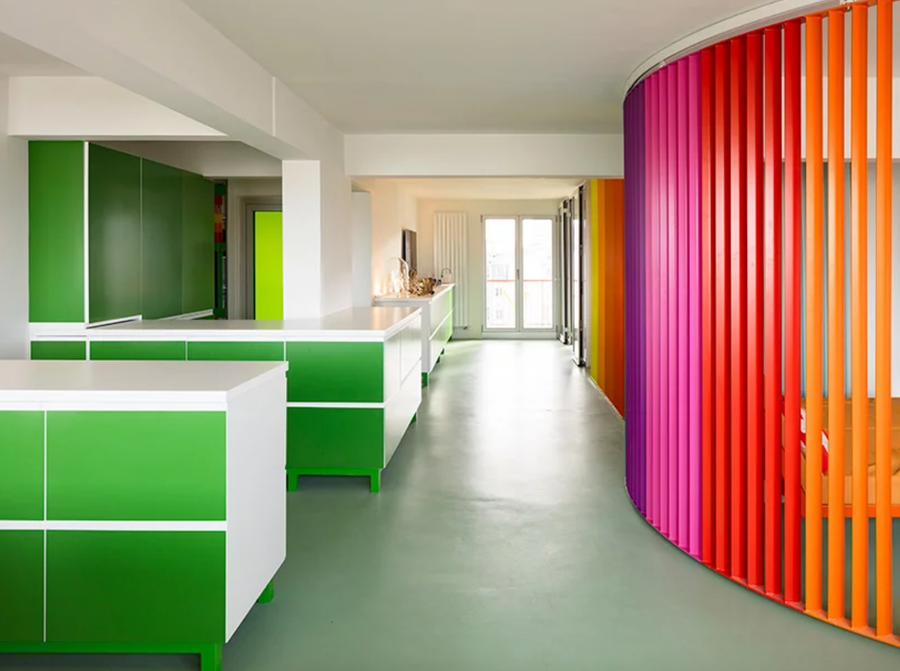 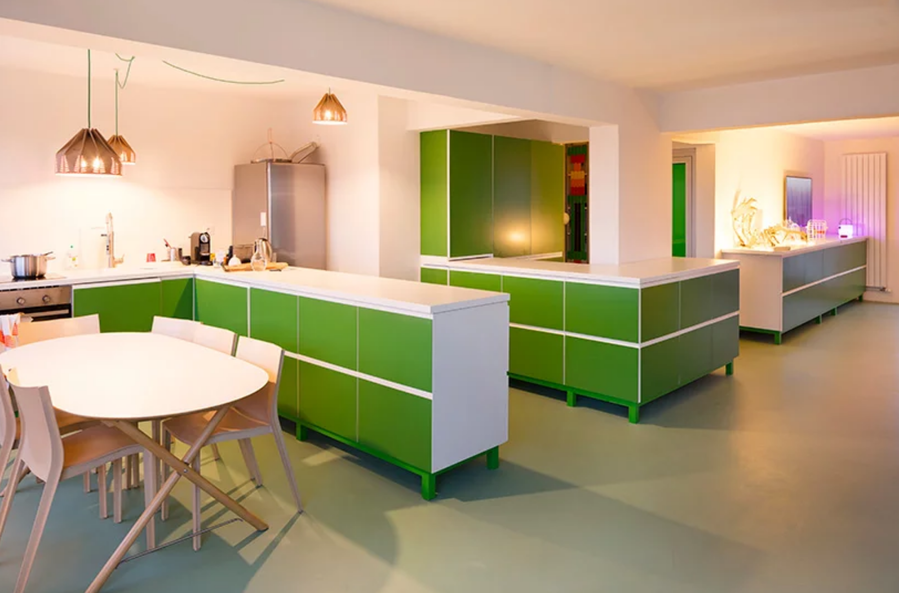 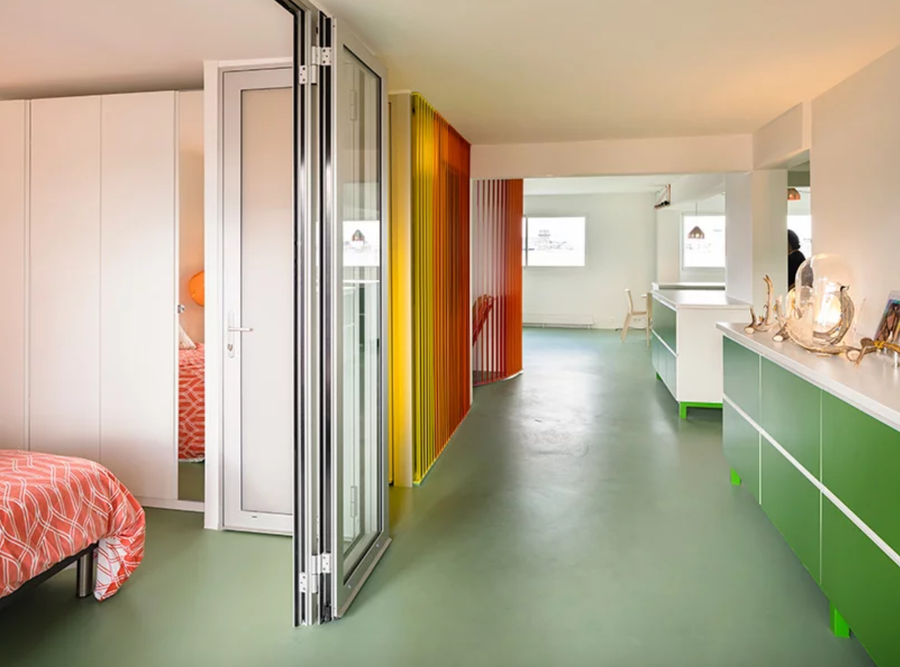 “I wanted to create a space suspended somewhere between two of the main places that define the modernity of Paris, the Eiffel Tower and the tour de Montparnasse: you can see both of them from the windows of this apartment,” says the designer. “After having completely cleared out the original plan, I made the radical choice of playing with color and a near-absence of furniture.”

After tearing down the original walls, Crasset established a clean white canvas throughout the house to act as a backdrop for her rainbow-colored installations. Custom built-in furniture like benches and tabletops defines separate areas within the open space, with the kitchen and showroom areas painted green to set them apart. These parts are “the woods,” contrasting to the “rainbow” seen throughout the rest of the apartment. 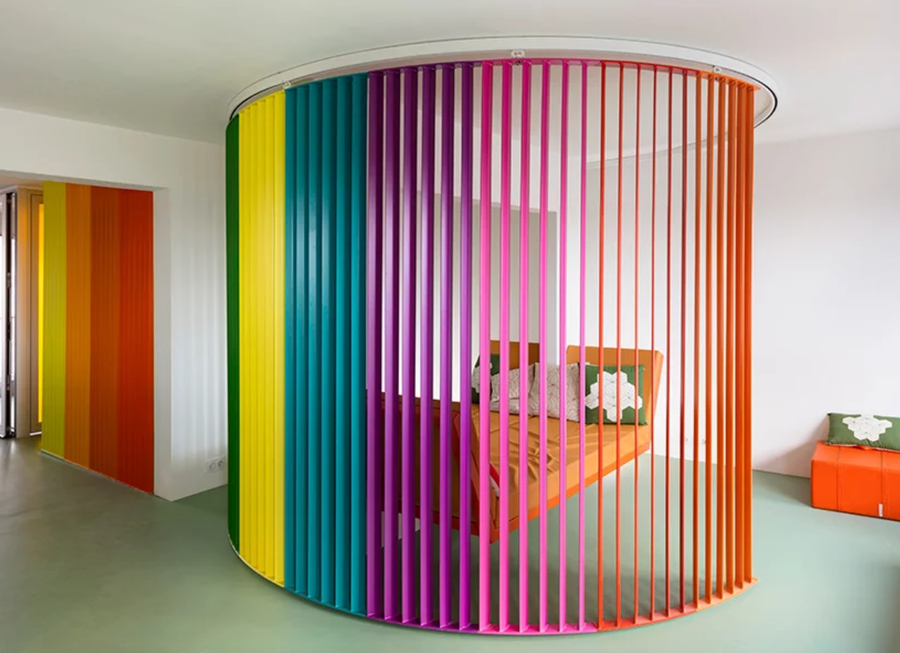 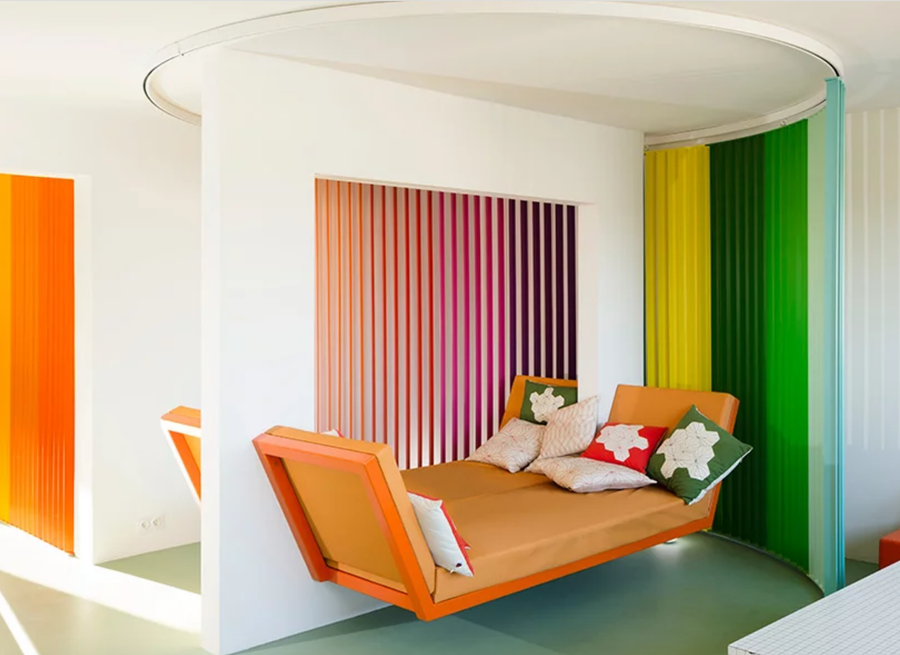 The apartment’s centerpiece is a four-person floating lounger, with two halves affixed to a central white wall. Even better, a bright circular screen can be drawn around it for privacy or to filter the light.

Crasset explains that the lounger is “an area for comfortable exchanges in levitation, surrounded by color above all, so we are in the heart of an invigorating rainbow that invites us to take advantage of the present moment each day. Color is life. The present configuration allows double exposure and makes the terrace accessible continuously with the living area.”

“The multi-colored vertical rhythm rotates to organize the area in different ways: along the wall, to accompany the moment of personal meetings; half-closed, it becomes an openwork panel to create several zones; completely turned, it closes the area off to create a space where one can sleep surrounded by this benevolent rhythm of color.” 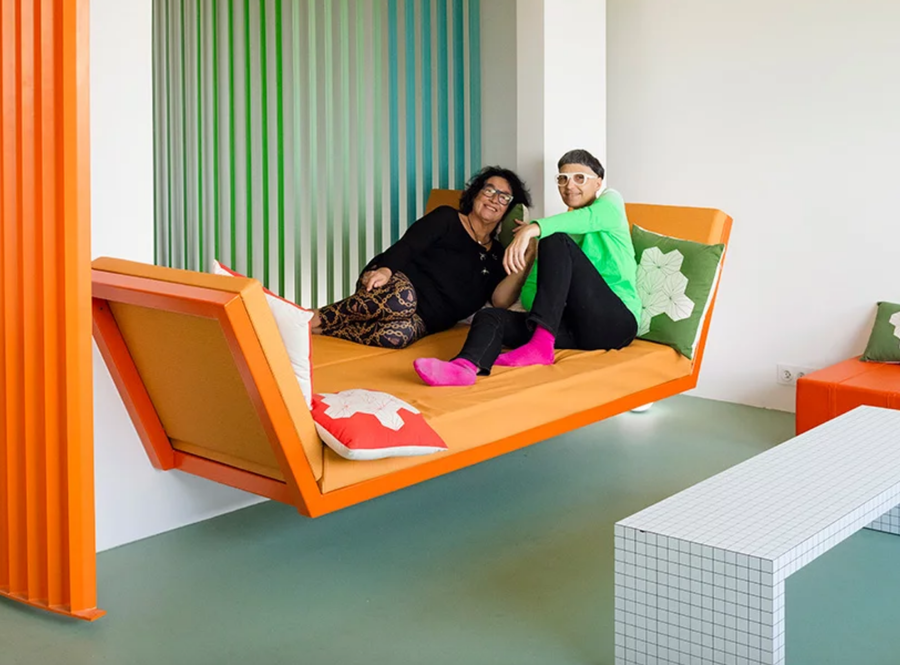 The result is, according to Crasset, an “invigorating framework [that] helps one to remain active with a lively mind.”

Monory seems to be pleased, too, saying that she “moved just by changing interiors.”