Don’t confuse a “boathouse” with a “house boat”: this historically humble and practical structure may float on open water, but it’s designed to host watercraft rather than people. Boathouses have existed almost as long as boats themselves. For example, Scandinavian “nausts” date back to Viking times, when they were sometimes built to enormous proportions capable of concealing a full-sized vessel and protecting it from the elements. These days, they’re more typically found along waterways just down the shore from a residence, housing recreational watercraft and offering a relaxing place to sit and enjoy views of the water. 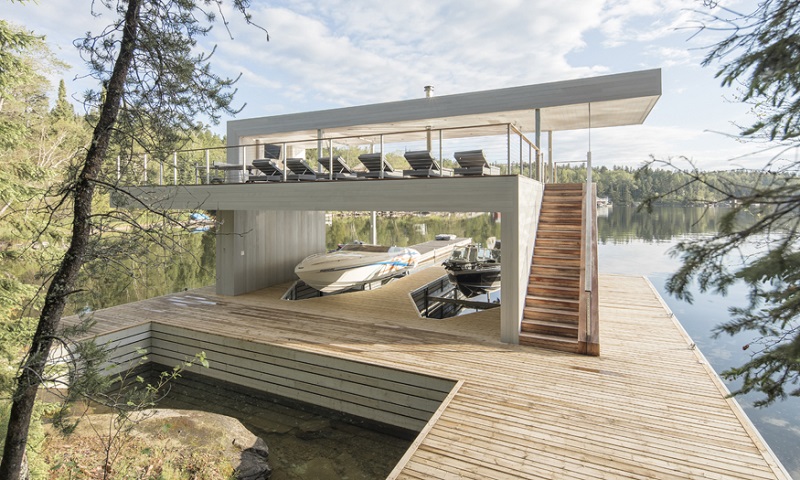 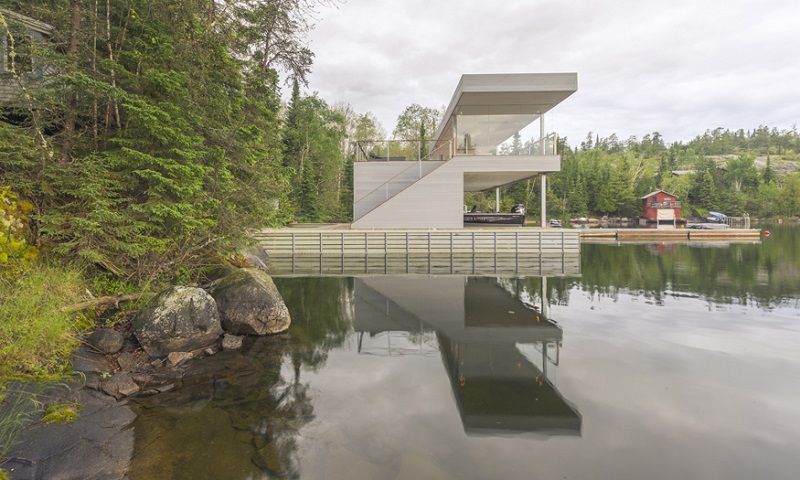 Traditional boathouses usually consist of little more than a roof and perhaps two or three walls raised above water level on stilts or pontoons. Sometimes, they’re modified to include living quarters, and many older boathouses have even been adapted to include restaurants, bars, and other leisure facilities. Regardless of whether they’re imbued with humility or enhanced with all the luxury trappings of an adjacent mansion, boathouses are rarely as stunning as this recent project in Canada, which was completed in 2016. 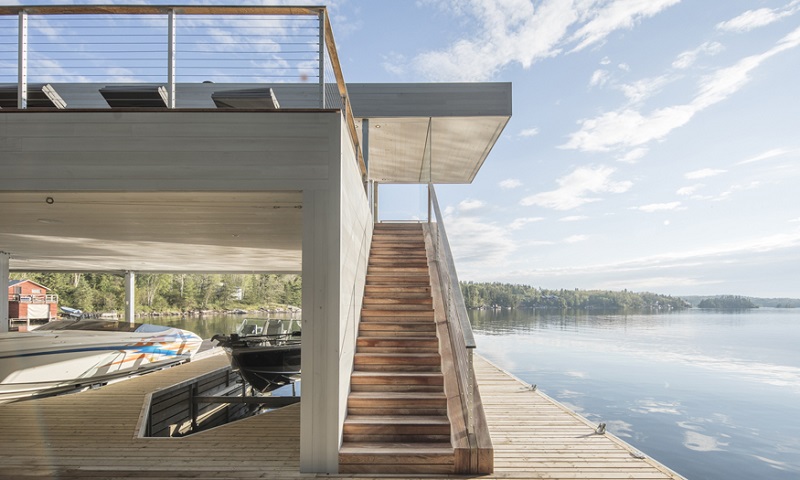 Located on Lake of the Woods in Manitoba, just across from the U.S. state of Minnesota, this 2,500-square-foot structure by Cibinel Architecture features an airy streamlined modern silhouette that contrasts with the rougher textures of the rocky coastline bristling with lush, vivid evergreen trees and dramatic cliff faces. Its shape recalls the refreshing minimalism of mid-century modernism, looking almost like a house that’s been stripped of its walls altogether. 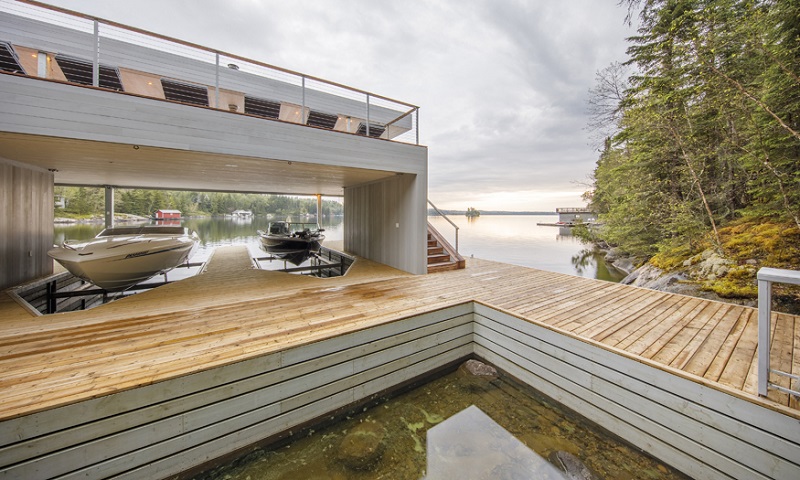 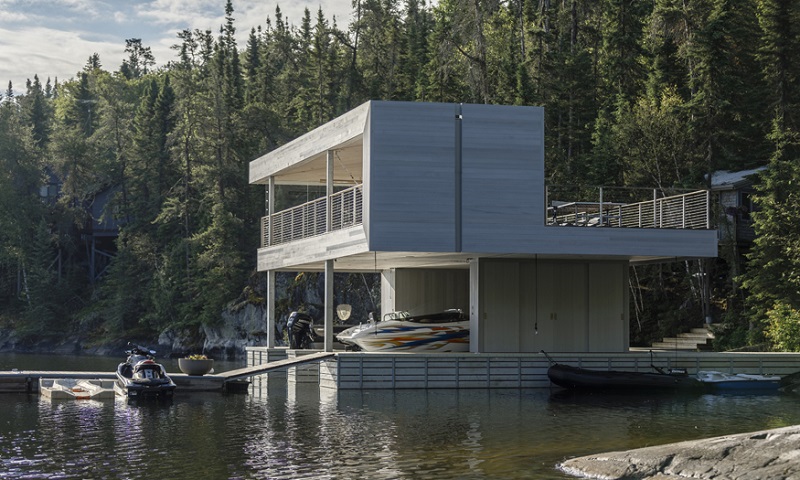 Cibinel’s clients requested a modern structure that evoked the classic lake lifestyle and offered a focal point for social gatherings, capturing sunlight from every angle throughout the day and spotlighting spectacular northeastern views of the water. It would have to offer parking for multiple boats and year-round storage, too. The architects describe the resulting design as “playful,” noting its appeal across all four seasons. 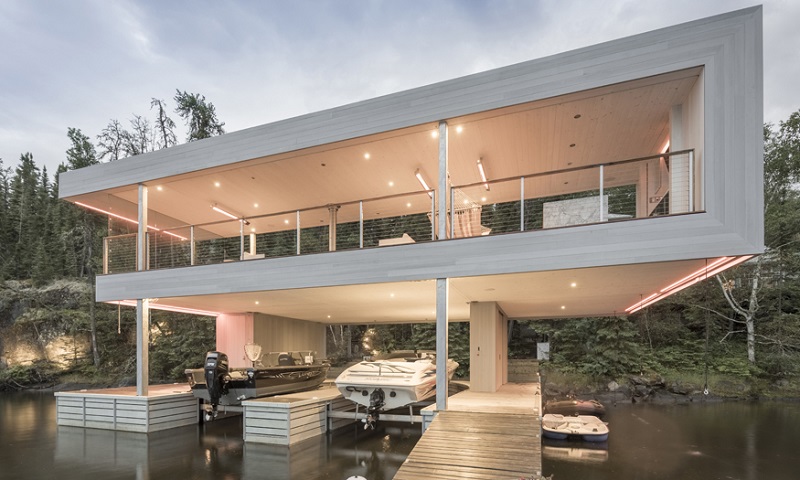 Horizontal steel planes clad in warm unpainted wood sit on narrow supports, cantilevering a third of the structure over the water in an intentional echo of a boat’s profile. Two small custom-shaped niches nestle the clients’ boats when they’re not in use, making it easy to climb in from the sturdy docks around them. The upper deck is half sheltered, half open to the sky, so guests can sunbathe on it or lounge on cozy couches beside a warm wood stove in rainy weather. 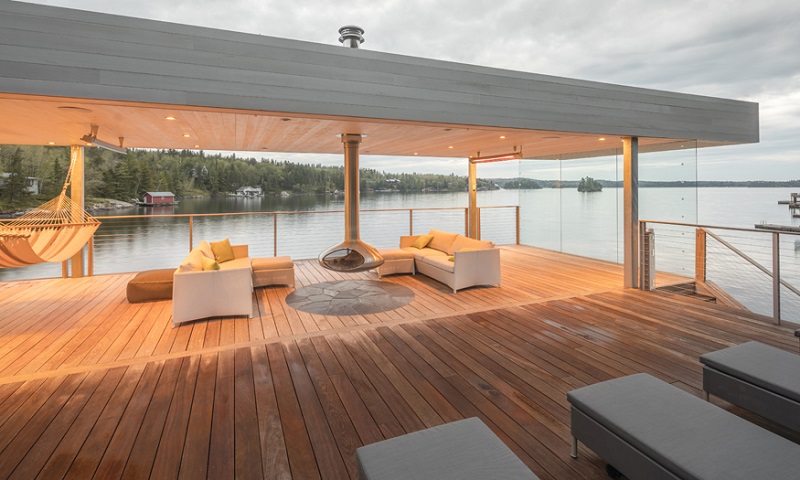 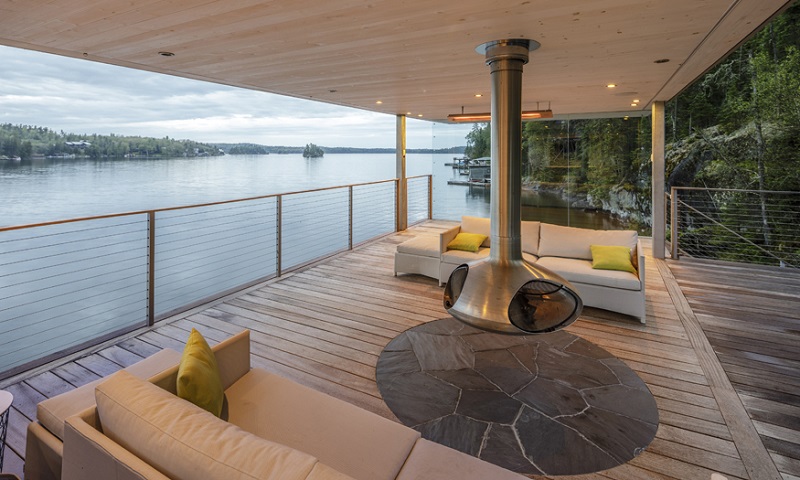 Mosquitoes are no problem thanks to a sliding curtain that can screen in the covered half of the upper terrace at a moment’s notice. A glass wall at one end protects against strong winds and eliminates the need for a guard rail, opening up the view. Doesn’t it make you wish you had a boat or two of your own, even if just to hold an epic party at a boathouse like this?

Cibinel Architecture is a professional consulting firm based in Winnipeg, Manitoba that attracts clients who are looking for clever solutions to unique design challenges. They’re known for their work on a number of heritage, academic, institutional, cultural, commercial, and residential projects.