When picturing a quiet getaway in the woods, the first thing that most people think of is a more or less conventional log cabin. Still, it’s always fun to see architects and builders moving away from that norm and creating structures with a little more imagination and verve to them, such as modern tree houses and camouflaged subterranean lairs. When tasked with designing a fun retreat in the forests of Sutton, Canada, YH2 Architecture turned to a beloved animal dwelling for inspiration: the birdhouse. 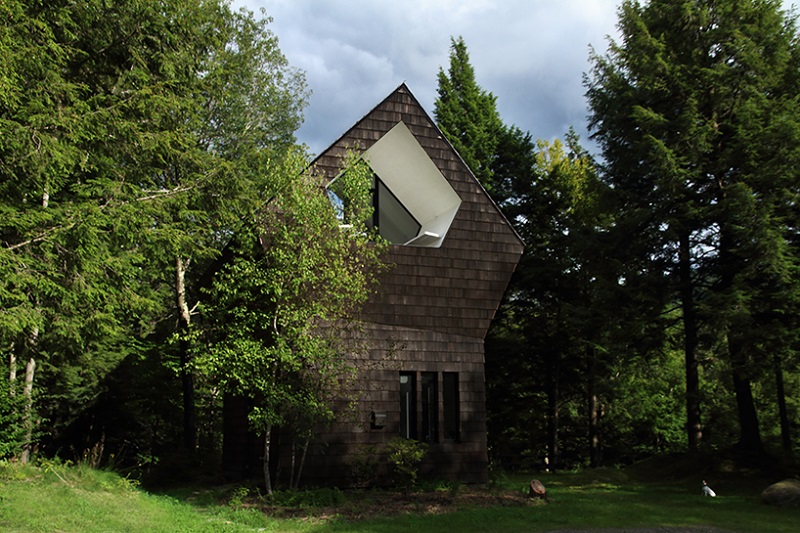 In many cases, the most alluring and effective birdhouses boast deceptively simple designs. They’re usually taller than they are wide, featuring pitched roofs and openings just above of the center of their front-facing facades. The entrance’s off-center position is meant to protect any eggs that might be inside the house and, later on, gives parent birds enough room to drop food into their chicks’ open mouths from above. 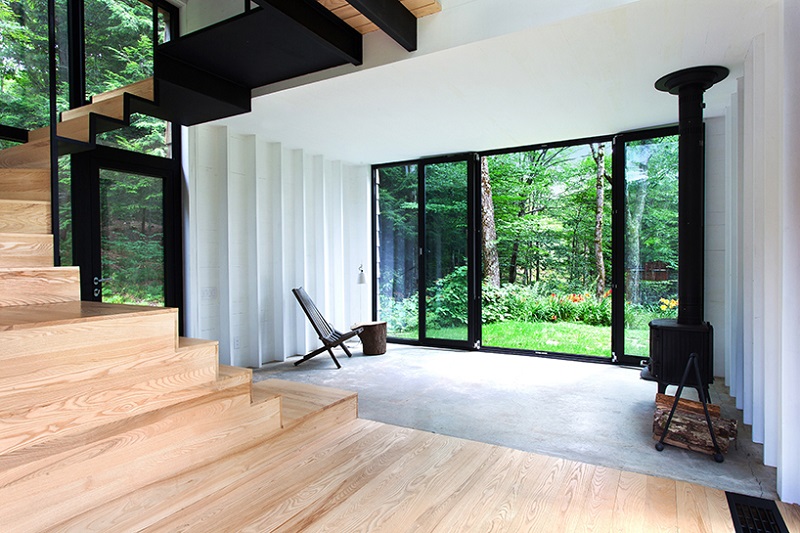 For “La Colombière,” which translates to “the dovecote,” YH2 was asked to transform a lumberman’s former storage shed into a quiet refuge for the new owner without increasing its geographic footprint. The “new owner” in question is Suzanne Rochon, a landscape architect who mostly bought the property for the land that came with it. Being an architect herself, Rochon began renovating the cabin on her own. While she found it suitably comfortable for a single person, she felt like she didn’t have enough space to receive any guests. That’s when she called on YH2 to help her, requesting three additional levels of living space to be added on top of the existing structure. Like the trees around it, La Colombière grew upward rather than outward. 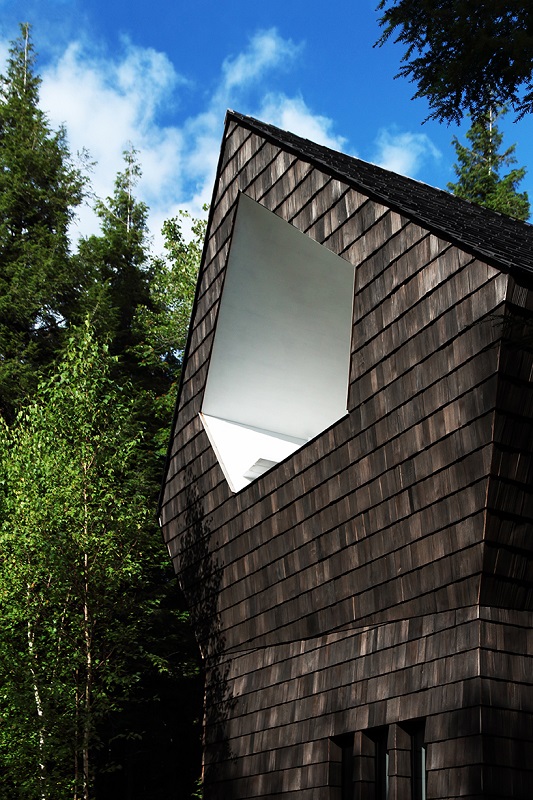 The final product bears an uncanny resemblance to an archetypal birdhouse. The building is best described as a geometric volume perched upon a cube and pierced by an oversized pentagonal opening at its highest level. To blend the home into the surrounding forest, the architects have completely covered it in weathered wooden shingles. Since the building’s footprint remains unchanged, the property’s five densely wooded acres of land can still be fully appreciated. No trees were cut down during La Colombière’s renovation, and only a minimal amount of heavy machinery was required. 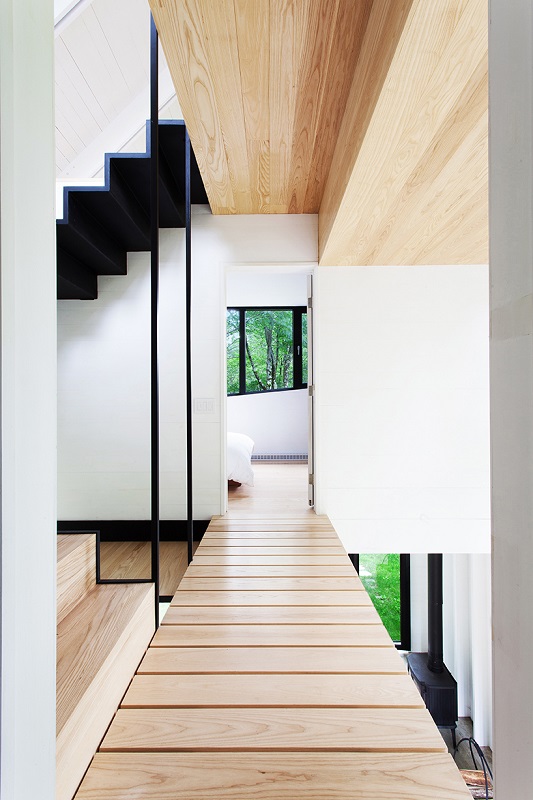 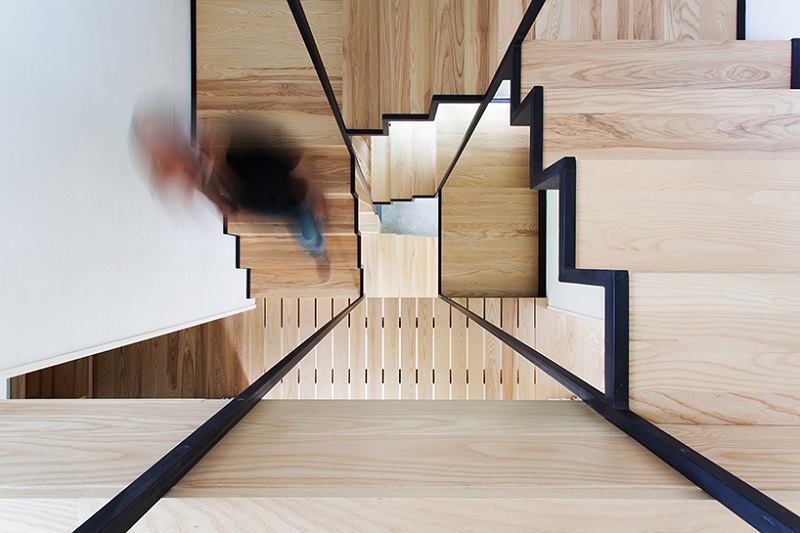 Inside, the home’s exposed studs and ceilings have been painted white for an expansive feel. Each bedroom is naturally illuminated by its own vertical shaft, which opens to the outside. These rooms are connected to the cabin’s living spaces via a series of bridge-like walkways. A sculptural ash staircase leads all the way up to a third-floor “roost,” where guests will find the other side of that hexagonal opening and a balcony lined with comfortable benches. This area is intended for relaxing activities like napping, reading, hanging out, and enjoying the views. 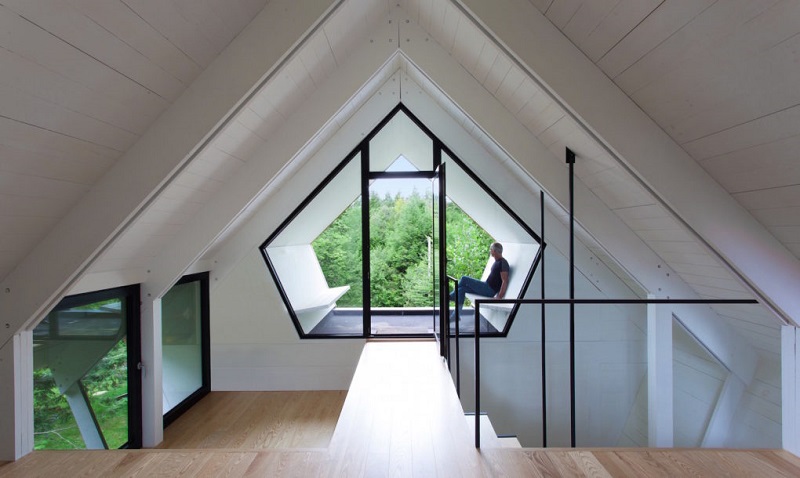 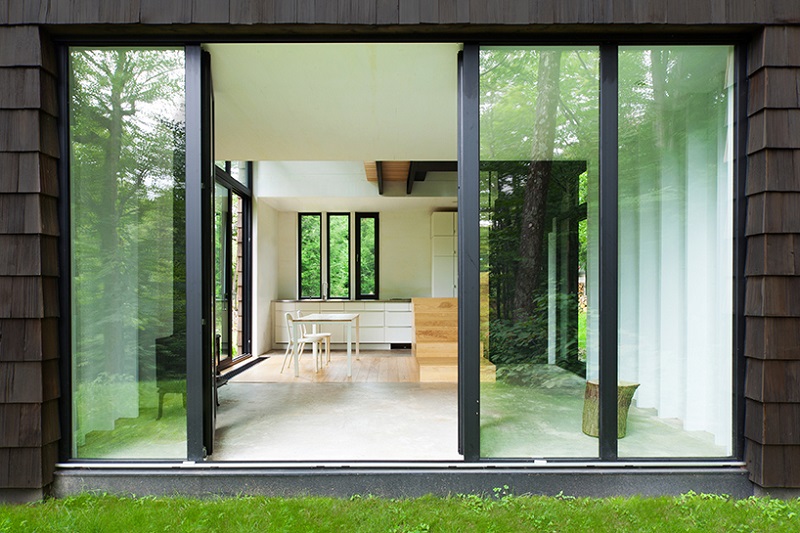 The cabin’s pared down interior design makes the neighboring forest’s lush greenery even more vivid than it already is and draws people’s visual focus to the landscapes outside. On the ground floor, a modest living room opens out into the woods through a sliding glass door. All of these elements make La Colombière a beautiful study in nature-centric living. With any luck, YH2’s masterful project will teach builders everywhere to respect the natural world rather than intrude upon it.