Strange feathery forms curl around themselves, tucked beneath glass domes, looking like a novel form of life somewhere between plant and animal. There’s something eerie and otherworldly about these sculptures by British artist Kate MccGwire. They have a sense of movement despite being still, as if they might start slithering around at any moment. 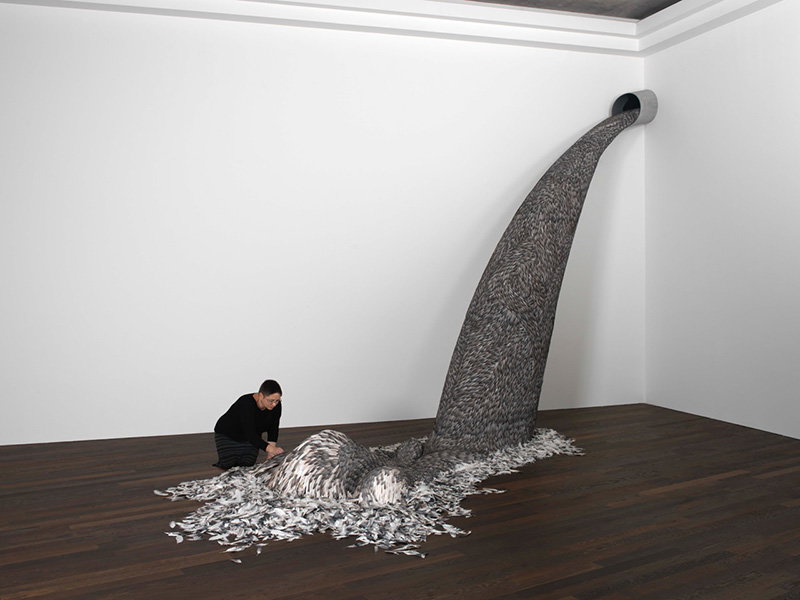 It’s okay if they make you a little uncomfortable. That’s part of what the artist is going for. As she told Artnews, “I want to seduce by what I do — but revolt in equal measure. It’s really important to me that you’ve got that rejection of things you think you know for sure.”

‘DISCHARGE’ installed in the beautiful library @harewoodhouse as part of Menagerie, my solo show which runs until October 22 Approximately 10,000 pigeon feathers were used in this piece. Sent to me by kind racing pigeon enthusiasts from all over the country. Thank you 🙏. Photography: the talented @jontywilde. . . Commissioned initially by @madmuseum New York in 2010 for Dead or Alive exhibition. Then shown in Paris for Nuit Blanche in the Natural History Museum In Paris 2012 @le_museum – then onto South Korea for the Art Biennial, then the opening show for the new space for @galeriemichaelhaas in Berlin – what an adventure.. . . #katemccgwire #katemccgwirestudio #harewoodhouse #sculpture #leeds #feathers #pigeon #racingpigeons #yorkshire

Currently, MccGwire’s work is on display in a solo show called “Menagerie” at Harewood House Trust in Leeds, England, including the striking “DISCHARGE,’ an installation featuring approximately 10,000 pigeon feathers sent to the artist by pigeon enthusiasts from all over the country. The work was originally commissioned by Mad Museum in New York in 2010 for the “Dead or Alive” exhibition, and it’s since gone on to travel the whole world. 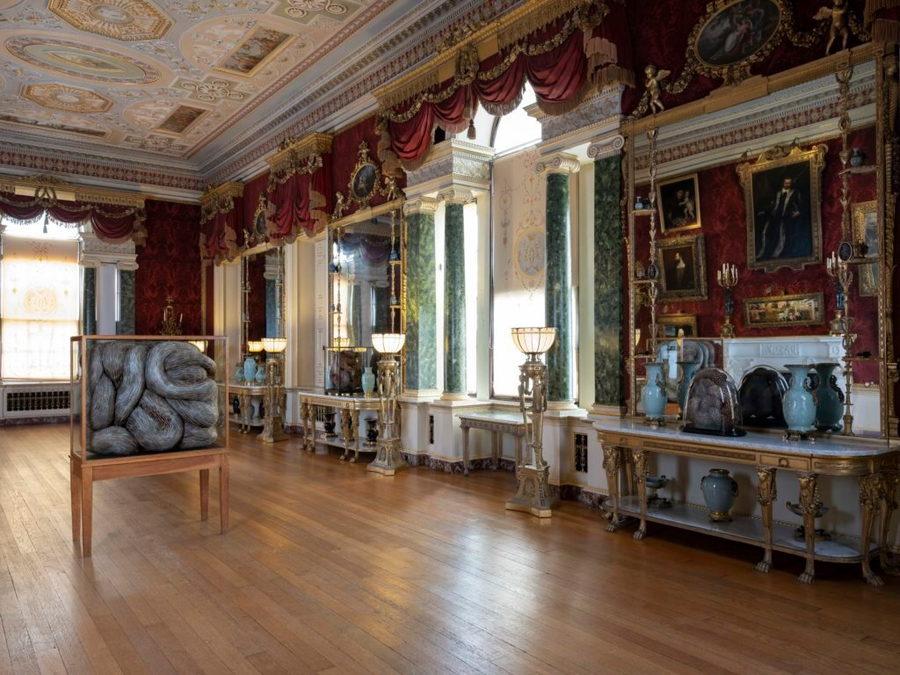 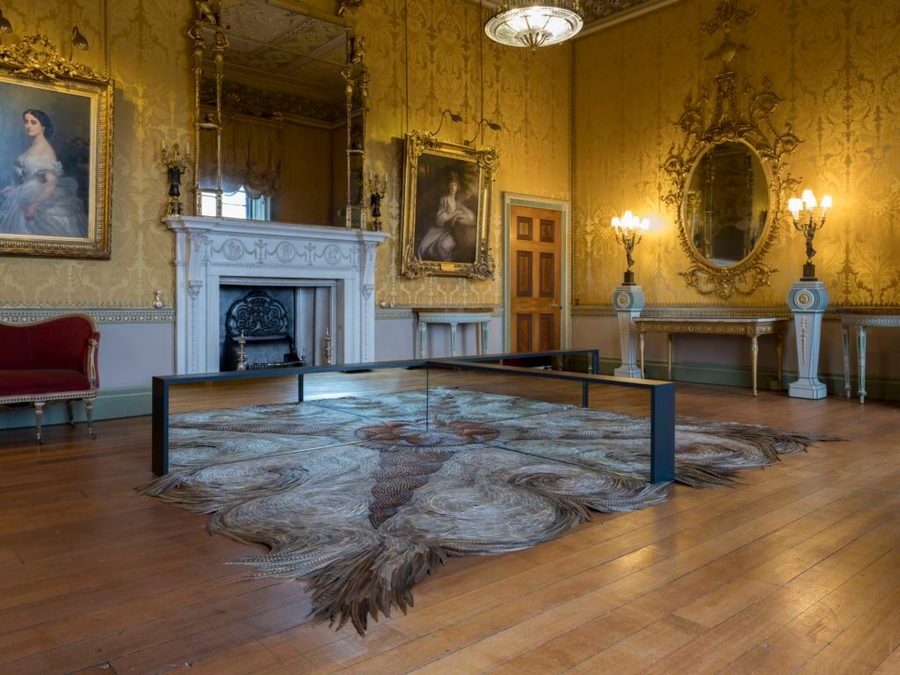 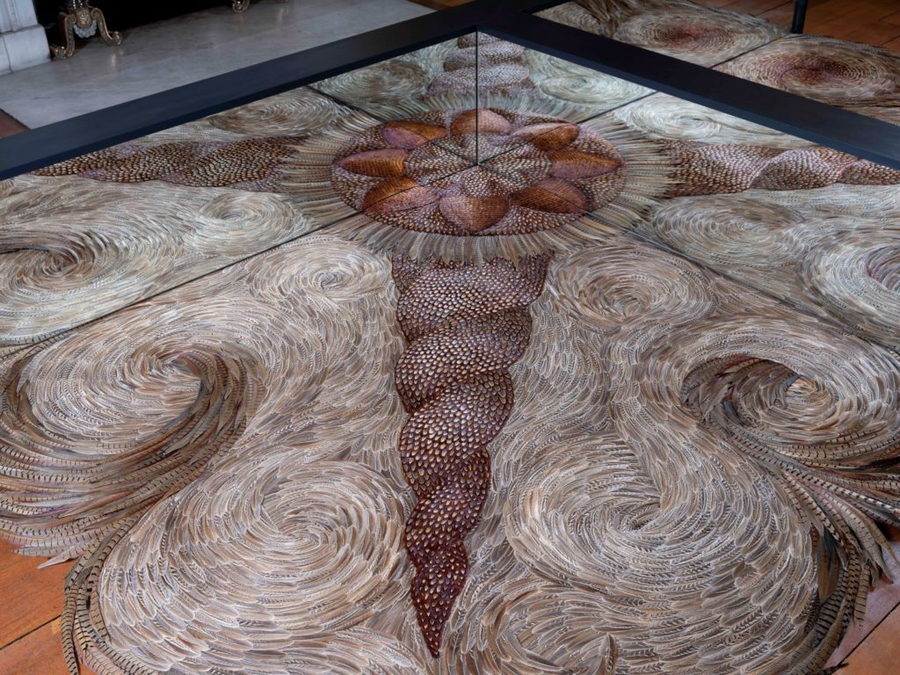 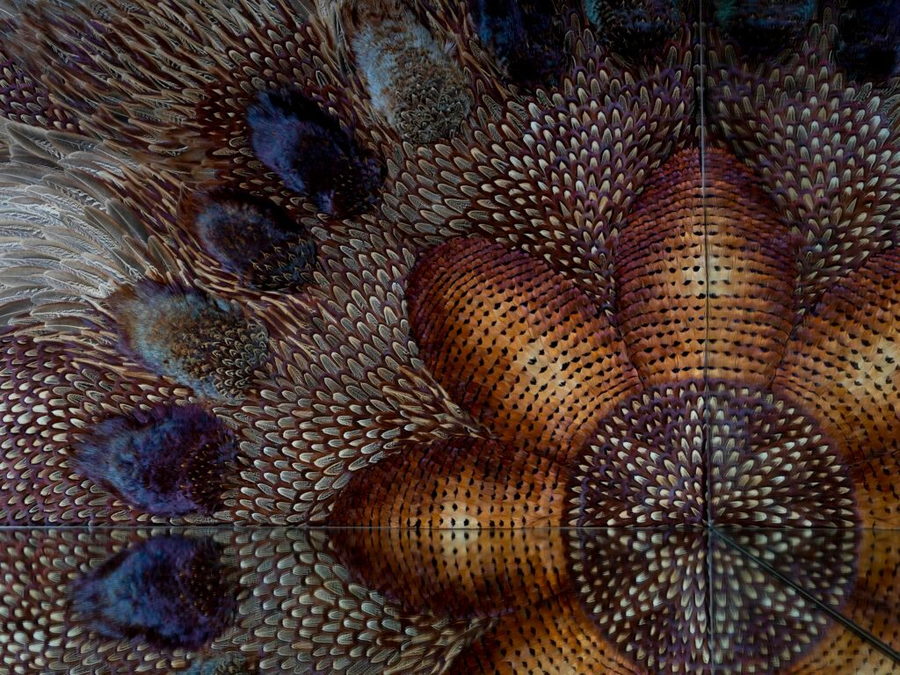 “Menagerie” includes eight sculptures and one new commission, shining a spotlight on the “common” bird as part of Harewood House’s focus on its bird collection and the 50th anniversary of its Bird Garden. “Cavort,” the new floor sculpture, is particularly striking for its textural mosaic-like qualities.

The trust explains that while “continuing our vision to support contemporary artists, Harewood commissioned a brand new work from Kate for the Yellow Drawing Room. Kate was inspired by the ornate design of the room, with its Chippendale furniture and in particular the Robert Adam ceiling. Cavort uses the ceiling as a starting point for a floor sculpture that combines mirrors and reflections, bringing the room and its decoration to light in a playful way. It is made from the feathers of game birds, with preparation work supported by a team of hands-on Harewood volunteers.” 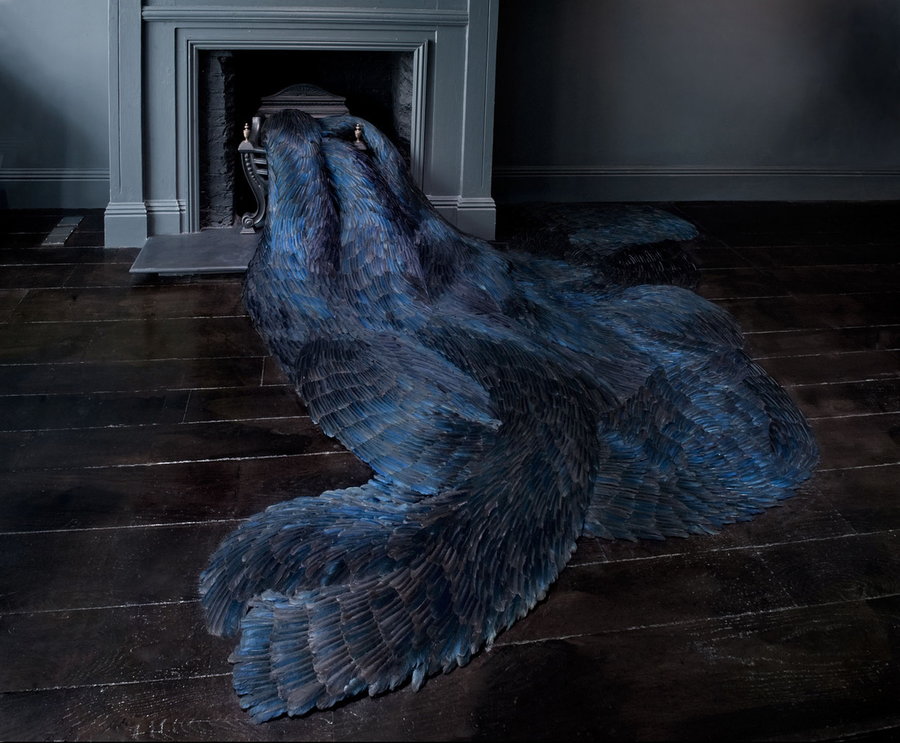 Earlier this year, MccGwire debuted two new cabinet pieces and an installation called “SLICK,” a sculpture made of magpie feathers streaming out of a fireplace, at Hignell Gallery’s group show “Renaturing Nature.” It’s a great example of how the artist’s work can almost seem like mutated creatures traveling just millimeters a second, too slowly to register in real time.

It’s important to note that MccGwire isn’t pulling any feathers off live birds to achieve these results. She works primarily with discarded and naturally shed materials, all sent to her by farmers, gamekeepers, and other bird handlers. She keeps her process under wraps to maintain the mystery, but each of her works typically consists of hand-trimmed feathers, felt, and a supportive structure made of an unnamed carved material. 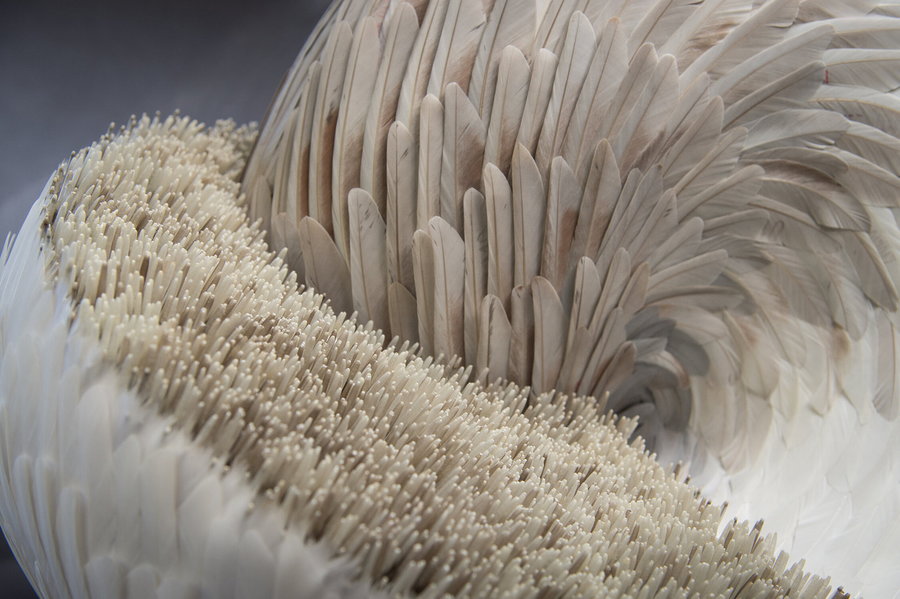 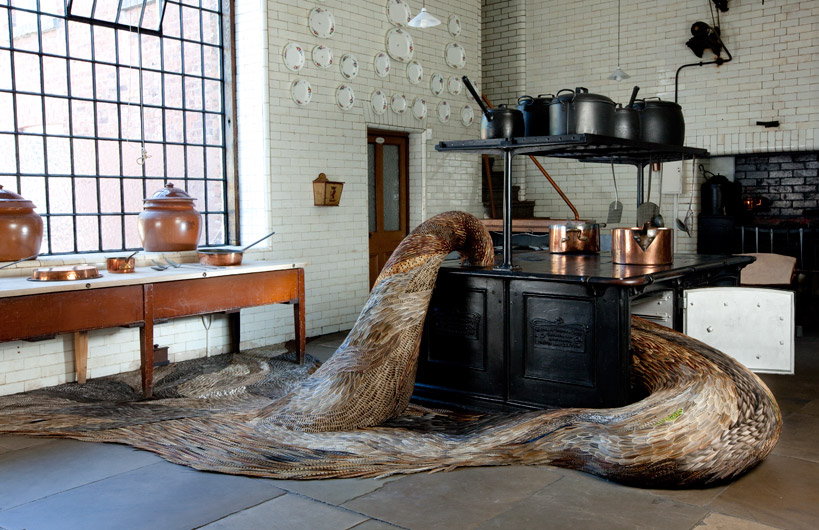 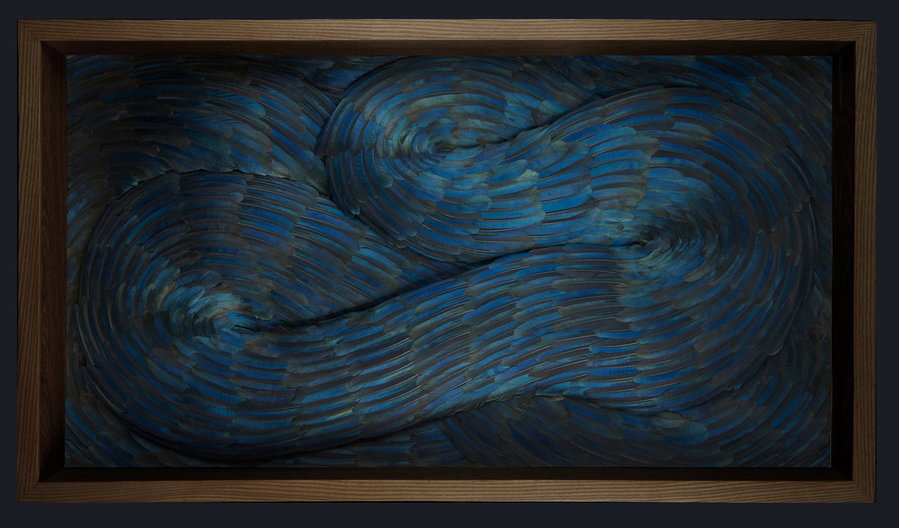 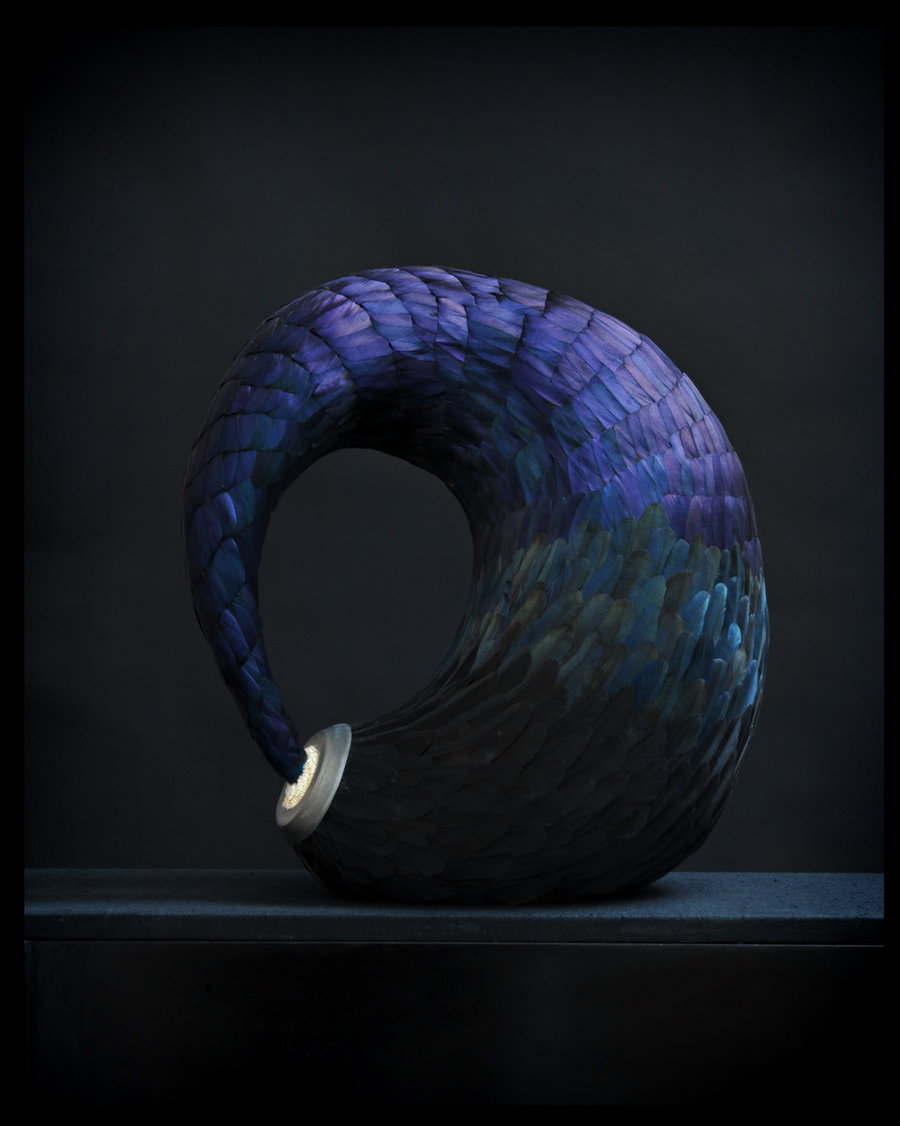 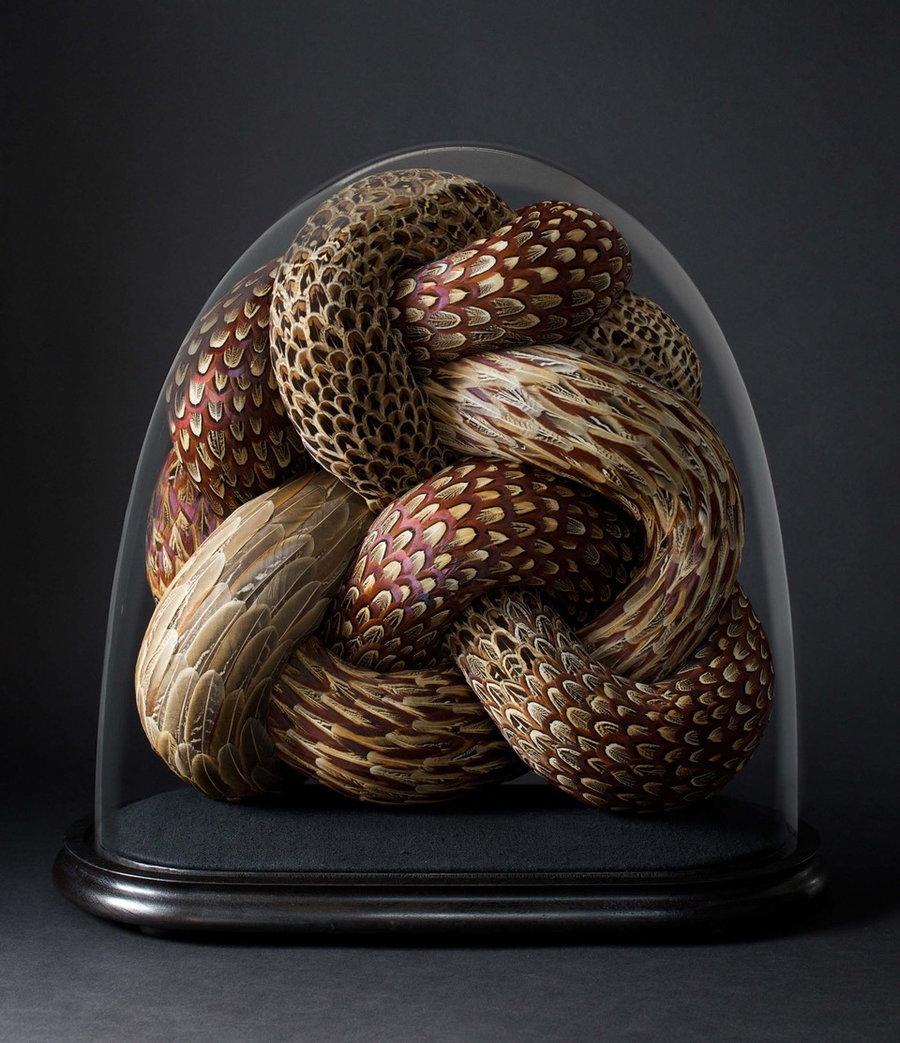 “My studio is a Dutch Barge on the River Thames, so I’m totally aware of the seasons, nature, and temperament of the river, and that really feeds into what I make,” MccGwire tells INHALE magazine. “I started by collecting the feathers on the bank near my boat, and after a while I had enough to start playing with them, layering, experimenting. Like the river itself, natural materials have a sort of siren-like beauty, and I saw the possibility in using the medium to create something powerful.”