Karim Rashid is not afraid to go bold or take inspiration from unexpected sources. The Egypt-born designer says he’s always looking to inject an interior or object with a sense of fun, an emotional provocation, and a touch of innovation. Simplicity and minimalism can be beautiful, but they should never be boring. 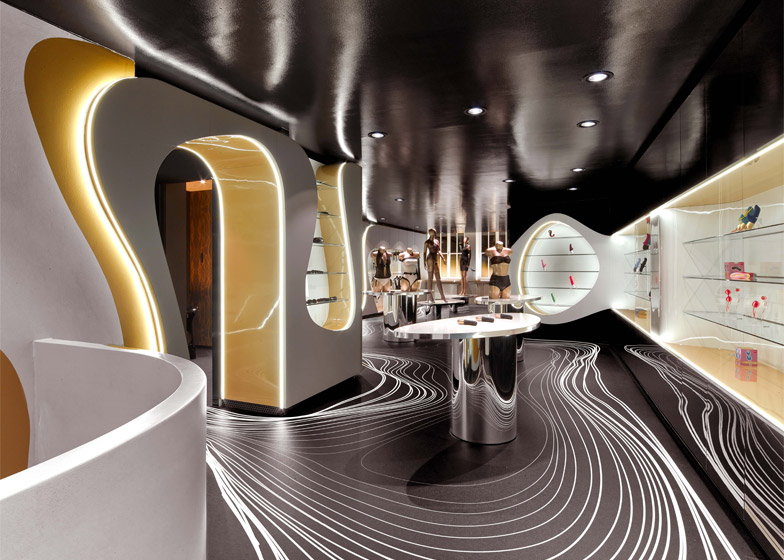 Whether you know his name or not, you’re already familiar with his aesthetic. You might even have one of his pieces in your home without knowing it. Rashid designed the omnipresent Umbra trash can called the “Garbo,” basing its shape on the silhouette of starlet Greta Garbo, as well as the “Bobble” water bottle. A peek through his portfolio will likely produce other objects you’ll recognize, too.

But Rashid’s interiors are where he really shines, maybe because you can imagine immersing yourself in these little worlds he has created. They’ll all unique, and they’re undoubtedly very him. Here are a few standouts. 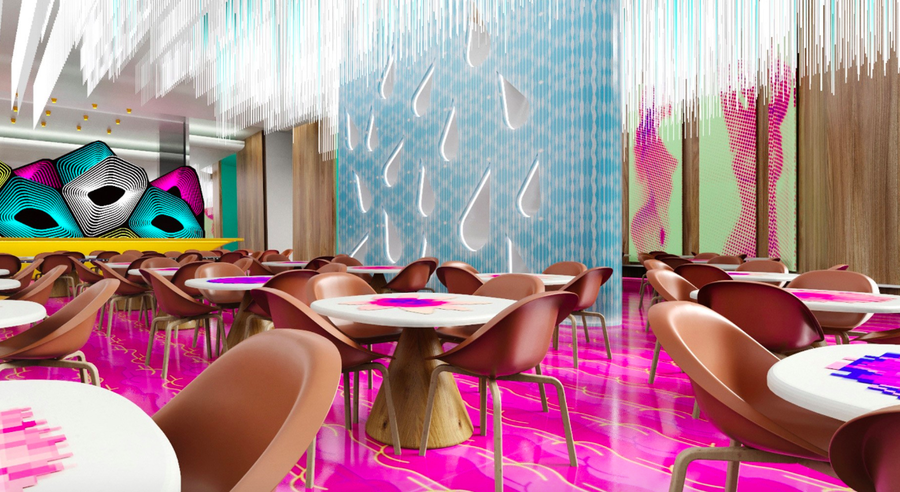 Designed in 2019 for Original Group at Temptation Resort Punta Cana, the Rain Restaurant puts the designer’s sense of joie de vivre on full display. There’s a vibrancy to it that seems like it would elevate your mood the moment you enter. 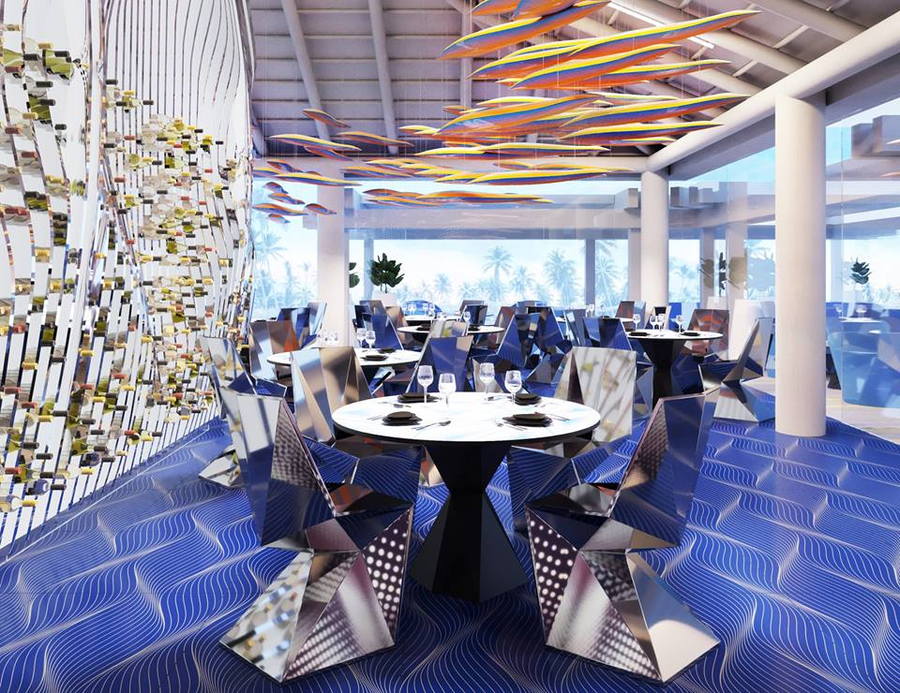 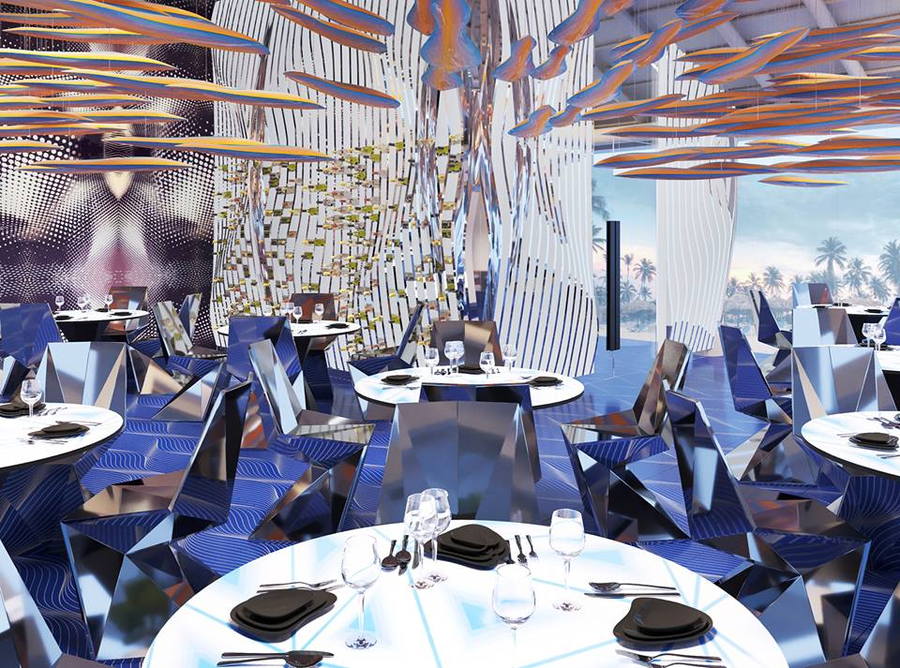 Also at Temptation Resort Punta Cana in San Juan, Dominican Republic, the Sea Flirt restaurant dazzles with mirrored surfaces and dynamic decorative elements, like the sculptures hanging from the ceiling and the undulating louvred wall in the center. 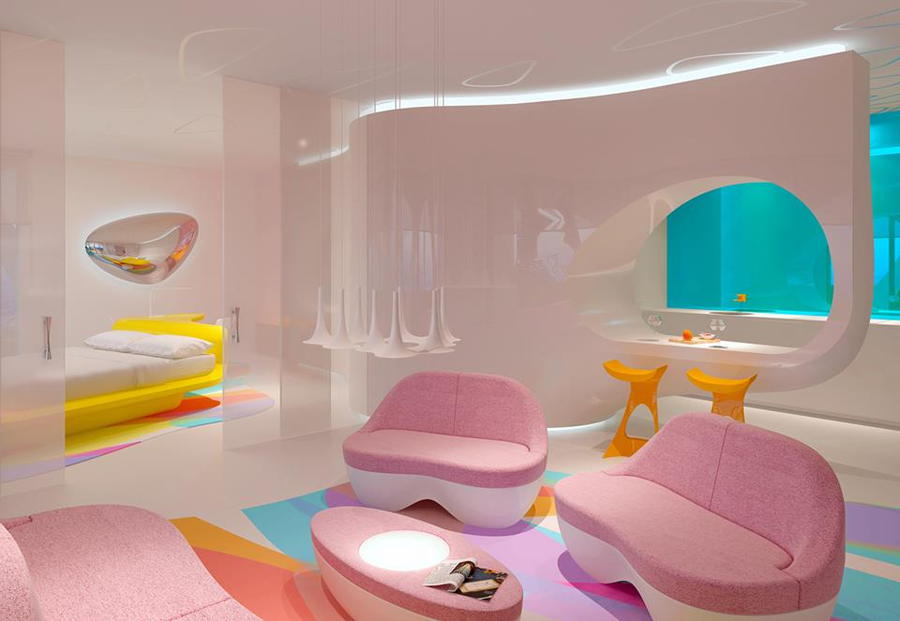 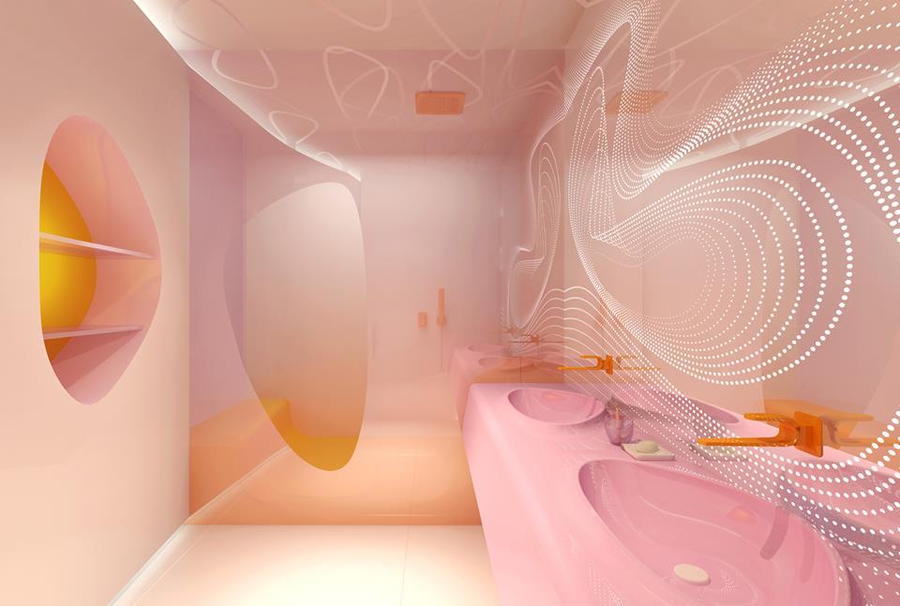 Not even the bathrooms are boring at the candy-colored Bahrain Eye Hotel. These interiors are a great example of fun modern design that feels unlike any place you’ve ever been before — but it doesn’t necessarily rely on spacey futuristic elements to achieve its sense of forward-thinking innovation. 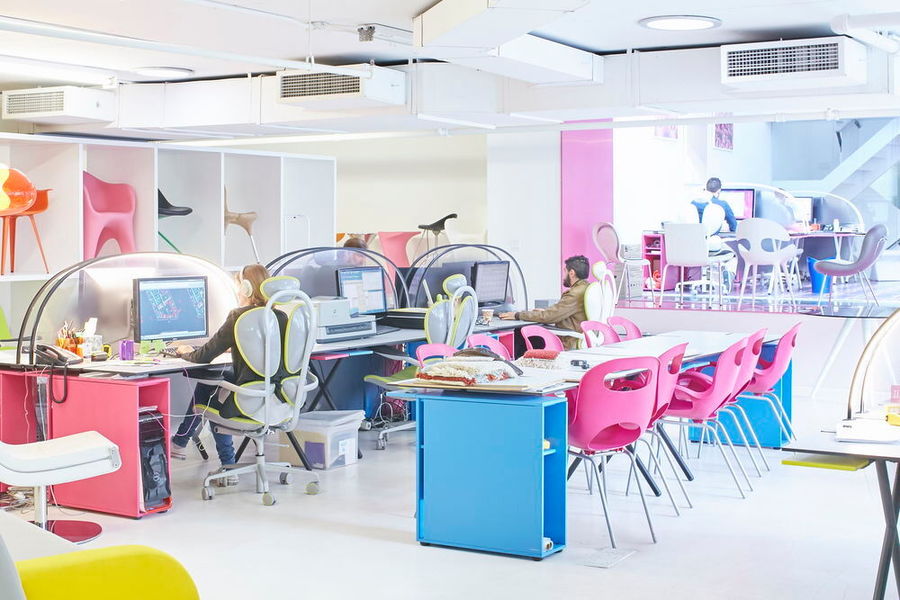 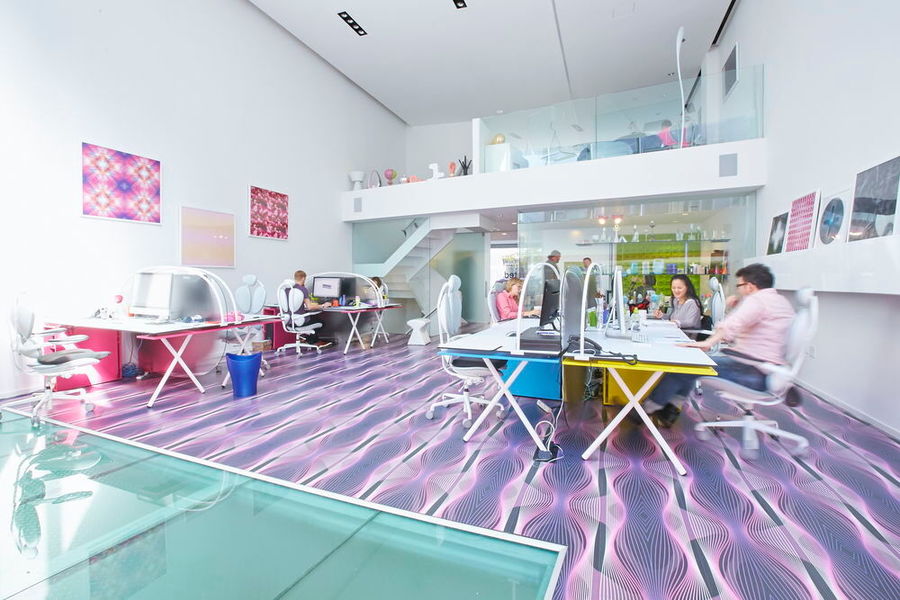 In 2016, Rashid opened a new office in China with 20 staff designers from all over the world, augmenting his New York City office with the same number of employees. Filled with Rashid’s own designs, Karim China Studio looks like a pretty awesome place to work, don’t you think?

The black and white lines of this small flagship shop for NYC Blinds are beyond cool.

“It was such a beautiful project to work on, but it was challenging within a small space to create a super functional showroom and offices that appear as open and airy as blinds themselves,” Rashid tells The Dieline. 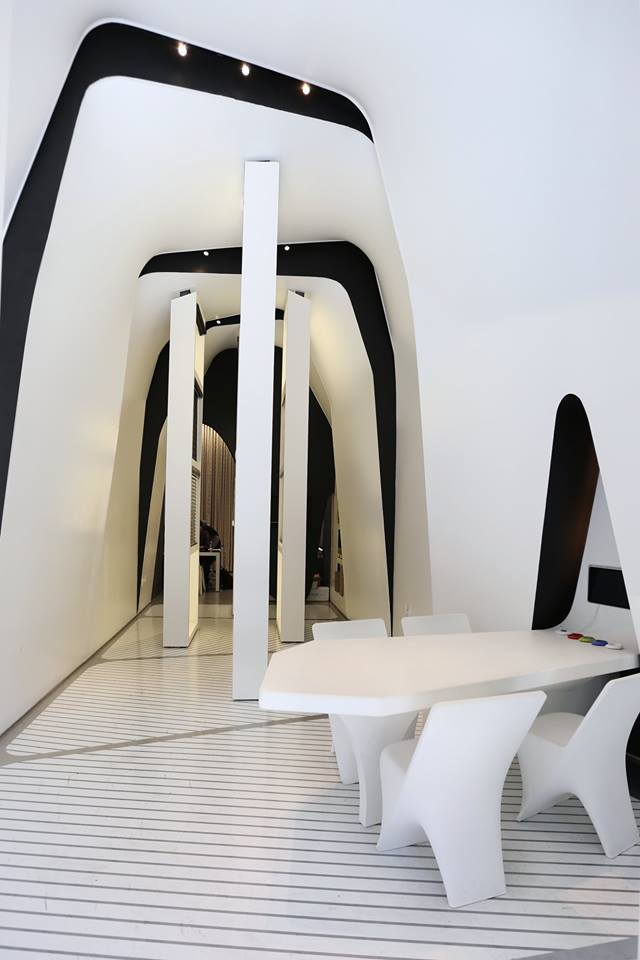 “I wanted the interior to capture a sense of movement, a rhythmic sense of planes in motion. The NYC Blinds shop was designed to speak abstractly of shade, of veils, of curtain-like fluid forms that envelop you yet feel infinite and open — a space that inspires you to create your own home with a positive ethereal spirit, a showroom that inaugurates the selection of blinds, wall wallpapers, shades, [and] curtains in an ordered relaxed way.” 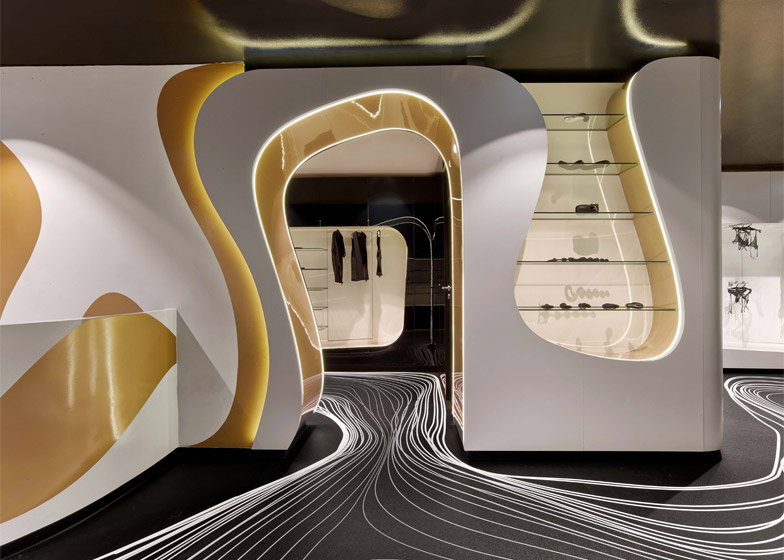 Sex shops probably aren’t the first things that spring to mind when you think about tasteful cutting-edge design, but Rashid defies expectations with the Fun Factory store in Munich, Germany.

“For the Fun Factory Munich store I was determined to create a retail environment filled with desire, emotion, and passion,” Rashid tells Dezeen. “Although the physical architecture of the existing building was difficult to soften, I succeeded in designing a sensual space.”