Set to become the world’s largest aviation hub, the new terminal building at Beijing Daxing International Airport by Zaha Hadid Architects is quickly taking shape in China, showing off an intricate skeleton reminiscent of decorative knotwork or lace. The design features five “limbs” that spread out from a central core, each one representing a key element of Chinese culture: silk, porcelain, farmlands, gardens, and tea. At this point in construction, however, the structure is most notable for its complex geometry, and it’ll almost be a shame to cover it up to complete the buildings. 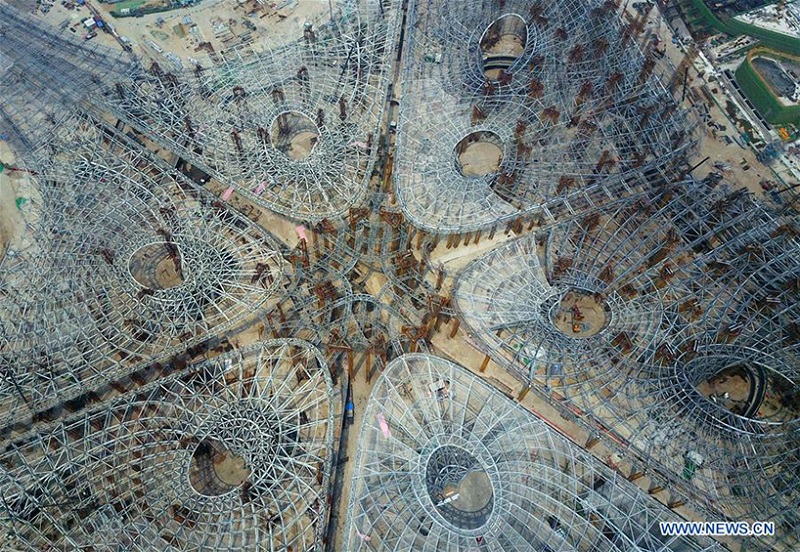 Hadid’s eponymous firm, which continues to produce projects in the architect’s signature style after her death, describes the structural arrangement as “flowing parabolic folds” under a vaulted roof, each of which reaches to the ground to provide support while also allowing natural light inside. This unusual layout draws inspiration from a traditional Chinese architectural principle in which interconnected spaces are always organized around a central courtyard. 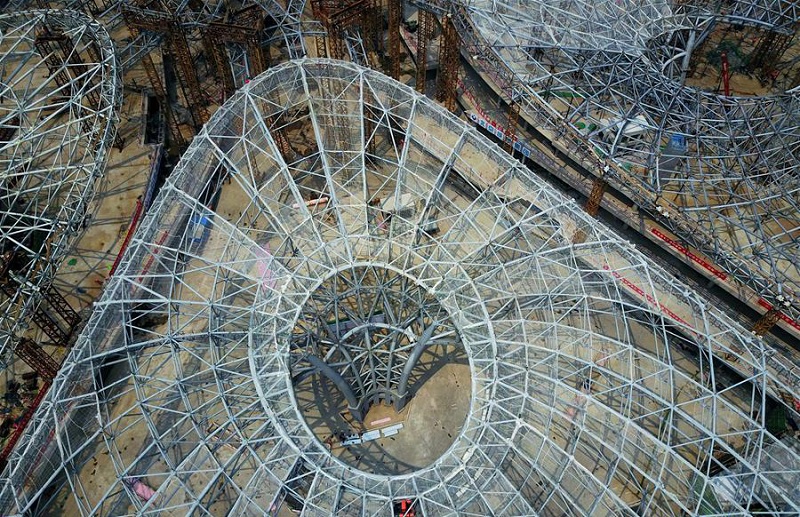 Whereas most airport layouts tend to be frustratingly sprawling, often requiring passengers to walk or sprint long distances from one terminal to another just to catch a connecting flight, Hadid’s is intentionally compact. Arranging the gates around the building’s long outstretched arms minimizes the distance between them, and the central courtyard offers passengers a convenient place to seek out services and purchase amenities. 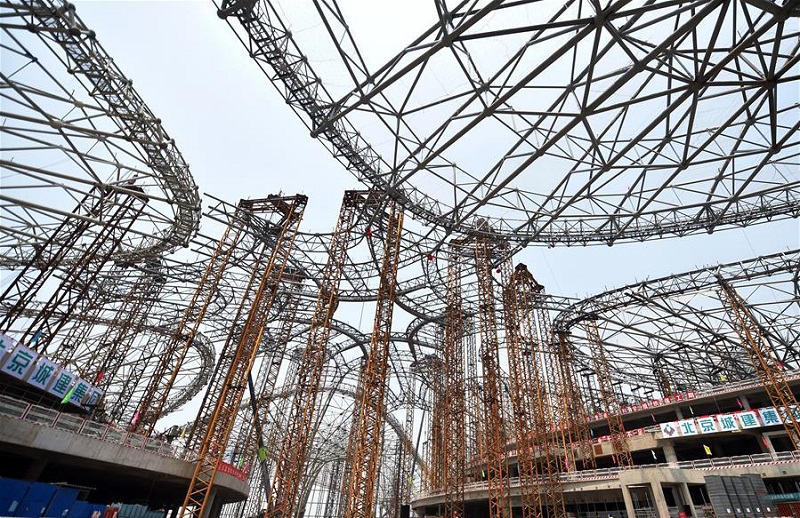 Renderings reveal lots of gleaming white curvilinear surfaces throughout the terminal’s interiors, a psychologically interesting design choice that seems like it could help soothe some of the tensions and anxieties that come with traveling. Harsh lines and shapes are completely avoided, and even the terminal’s staircases and escalators have a fluidity to their silhouettes. Hadid has previously been called “Queen of the Curve” for her devotion to parametric design styling with organic shapes that are often compared to seashells, snakes, and other wild creatures. 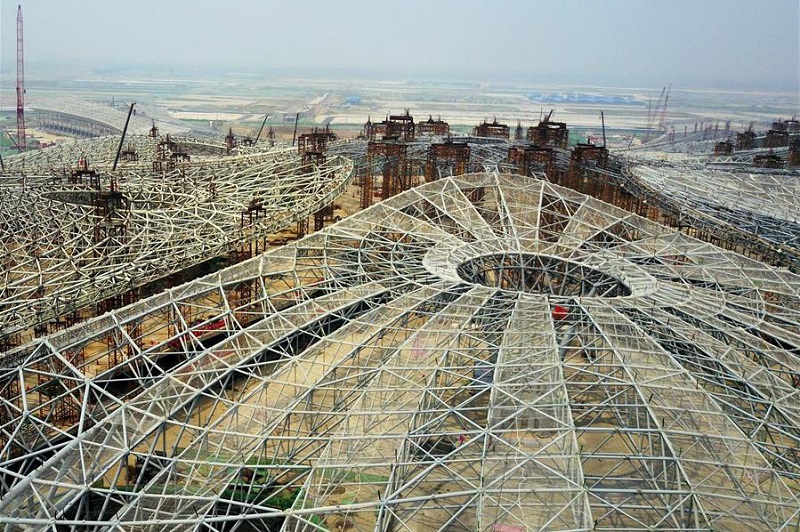 The design “guides all passengers seamlessly through the relevant departure, arrival, or transfer zones towards the grand courtyard at its center — a multi-layered meeting space at the very heart of the terminal,” says the firm. “Housing many aircraft gates in one terminal with a single passenger handling center — rather than many smaller terminals and continuous inter-terminal shuttle trains — significantly reduces the carbon footprint of the airport throughout its construction and operational lifetime; helping to achieve the airport’s high targets of environmental management and sustainability.” 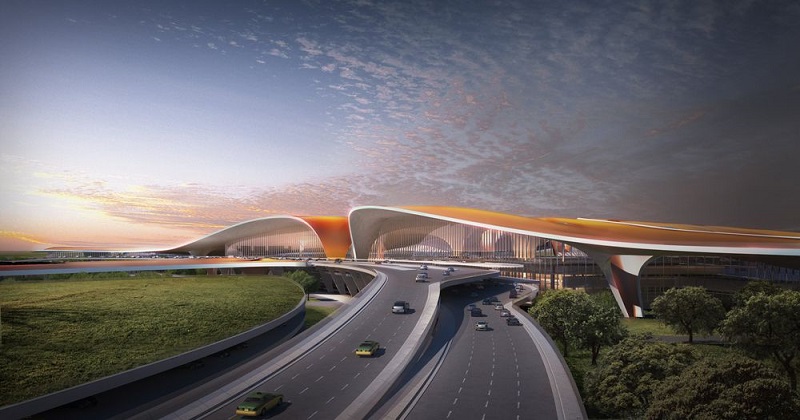 Zaha Hadid Architects won an international competition to design the terminal back in 2011. Still, this addition won’t be replacing the Beijing International Capital Airport, which is about 41 miles away. Instead, it will augment it to relieve congestion issues. The existing airport is currently over capacity, having served about 86 million passengers in 2014 alone. 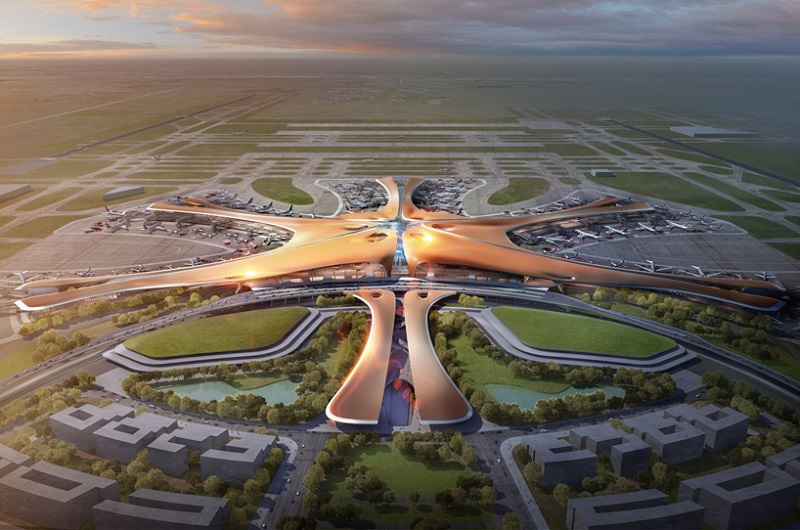 The new terminal will exclusively serve China Eastern Airlines and China Southern Airlines, diverting 40 percent of the existing airport’s passengers, or about 72 million people per year, and making the entire complex feel less crowded. When completed in 2019, the terminal will measure approximately 3.4 million square feet and offer rail connections to both the Beijing Capital International Airport and the city center.