During the pandemic lockdowns of 2020, people all over the world were stuck inside their homes, leading to a boon in renovation and redecorating projects. But even before that, spending on home decor was at an all-time high. So which countries are the biggest spenders, and which are the most frugal? A UK company called HouseholdQuotes analyzed data from Statista and other sources to reveal the percentage of monthly paychecks being spent on items like furniture, window treatments, textiles, and lighting. 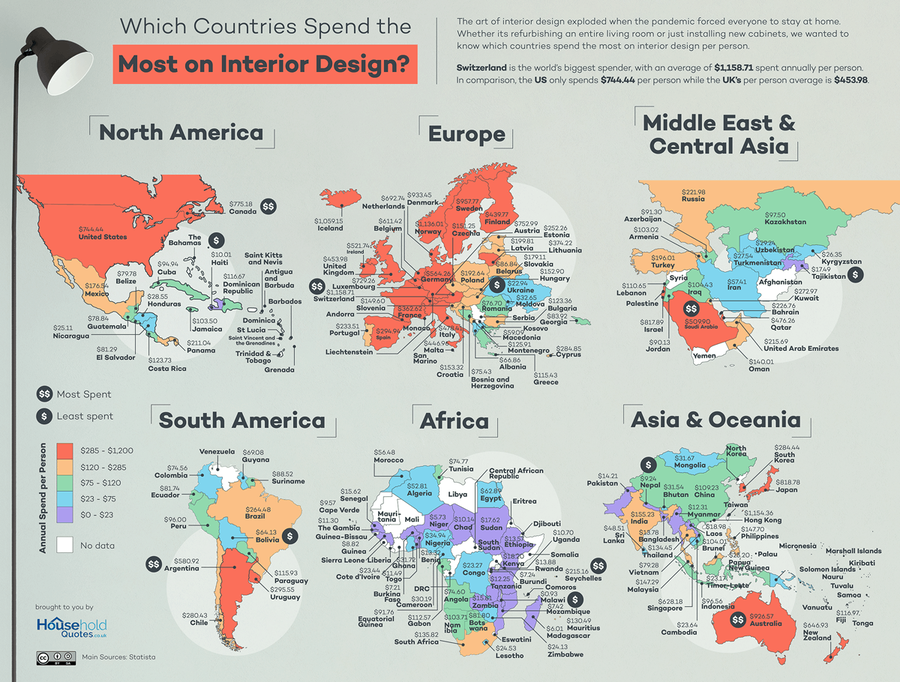 The results are pretty fascinating, clearly influenced by both access to wealth and cultural norms. When looking at the Earth as a whole, the Swiss are the most willing to open their wallets for home decor items, spending $1,158.71 per capita each year. That’s not too surprising given that Switzerland ranks above average in subjective well-being, jobs and earnings, income and wealth, education and skills, work-life balance, and housing security, according to OECD Economic Surveys. That means they have more money to blow in the first place, they spend more time at home, and they’re more settled than the average global citizen. Hong Kong is the second-highest spender at $1,154.36 per year, about 32.6 percent of the average paycheck.

Unsurprisingly, Western Europe spends more than Eastern and Southern Europe. While people living in Iceland, Norway, Denmark and Sweden spend close to $1,000 per year on home decor, Albanians spend just $66.86 and Ukrainians just $22.94. The United Kingdom is somewhere in between at $453.98. But, of course, spending varies by region, and the statistics show that Londoners spend ten times more than Scots. 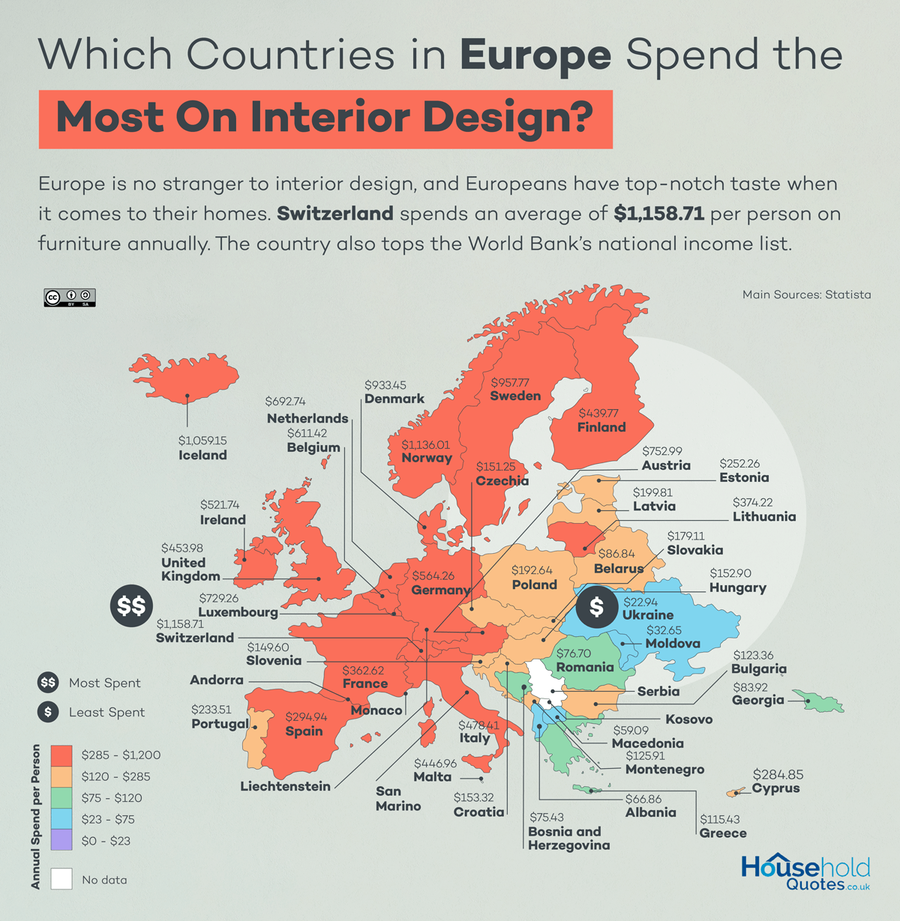 India spends the most on interiors relative to local wages at 102.24 percent of the average monthly paycheck, and if that figure seems off to you, there’s a good reason for it. Income inequality is worse in India than in many other countries, with the country’s richest 1 percent owning 73 percent of the wealth. Needless to say, figures that seem to indicate widespread irresponsible spending on home decor aren’t telling the real story. The average per capita annual income of Indian households in 2017 to 2018 was about $600 USD, while the top 20 percent of earners brought in over $118,000 USD. Rounding out the top five countries that spend the most on interior design relative to income are Argentina, Angola, the Philippines, and Vietnam. 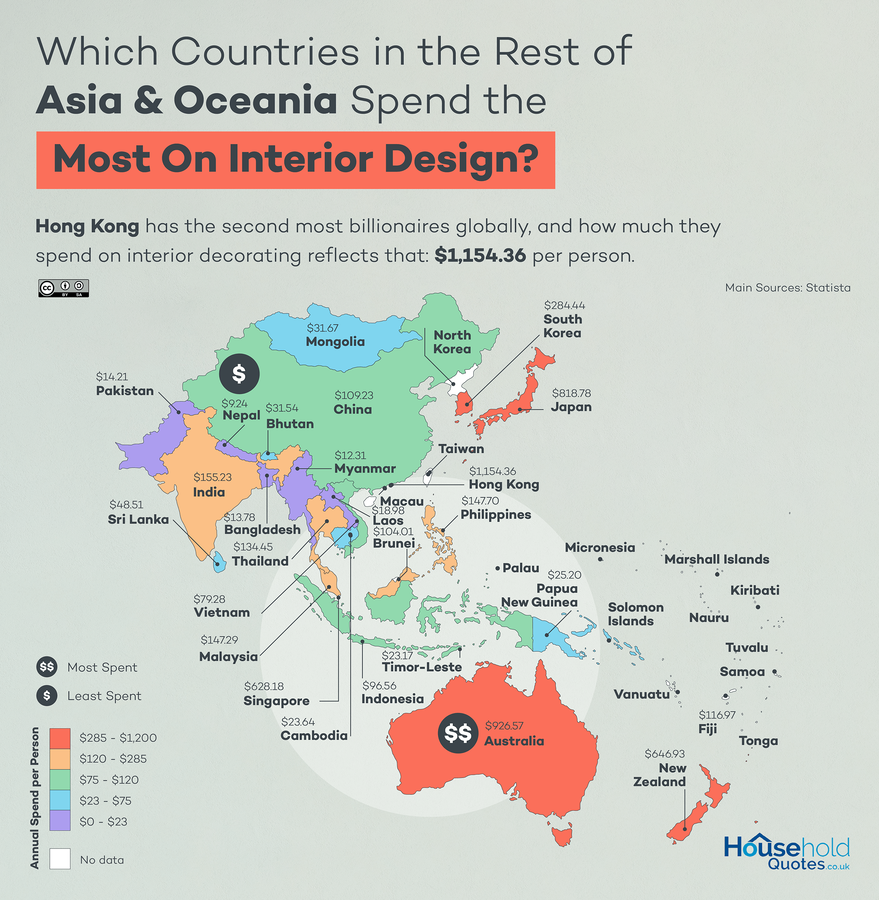 Who spends the least? Citizens of Malawi, at $0.93 per year and 3.07 percent of the average paycheck. It’s just not really part of Malawi’s culture to consume a lot of home decor. Most of the population lives in traditional vernacular housing made of mud and sticks, which tends to be on the smaller side. But you might be surprised to learn that the other countries that spend the least on home decor include some of the richest economies in the world: Brunei at number two, and United Arab Emirates at number three.

Other countries on this list include Greece, Bangladesh, and Haiti. To put that in perspective, the tiny country of Brunei is outlandishly wealthy due to its oil and gas resources (and home to the world’s richest person), while Haiti is home to some of the most severe poverty in the Western Hemisphere. What do these nations have in common? A hot, sunny climate that makes people spend less time indoors, alongside traditions of minimalist interior decor. 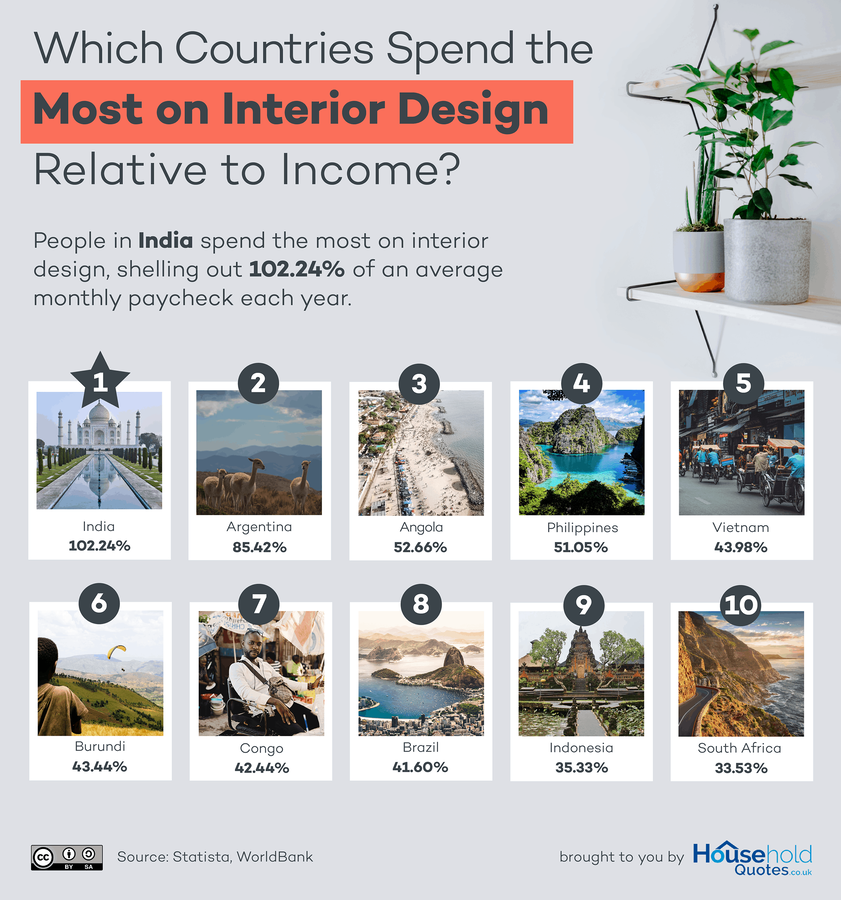 In North America, Canadians are the most eager to spend on decorating at $775.18 per person annually, but the U.S. is right behind them at $744.44. In Mexico, that figure drops to $176.54. South America also displays a significant amount of disparity between nations, with Argentina spending $580.92 at the highest and Bolivia spending $64.13 at the lowest.