The time-honored tradition of sand castle building is a getting a scary new makeover, thanks to this horror-loving Canadian artist. 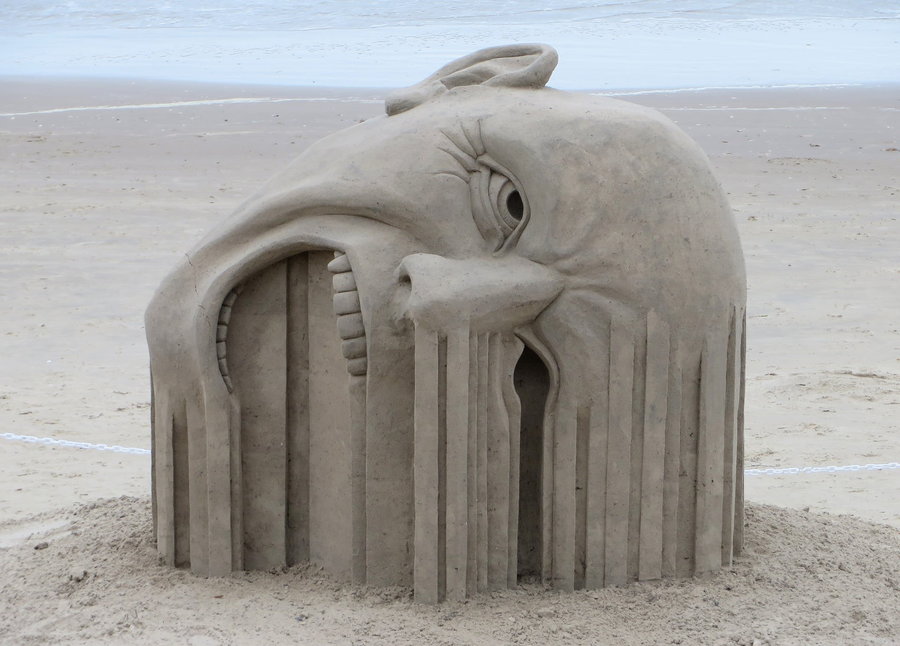 Guy-Olivier Deveau, who lives in Quebec City, is a contestant on the second season of the Canadian reality show Race Against the Tide, where participants sprint to complete giant sand sculptures on the beach of the Bay of Fundy. The judges select the winner on each episode just moments before the tide washes all the art out to sea. 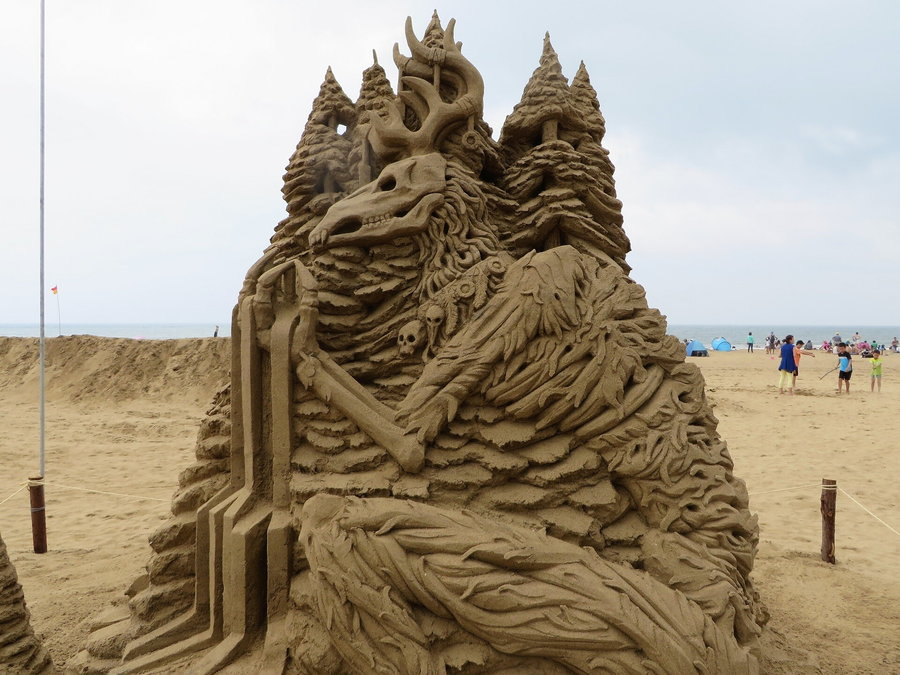 While some sculptors might be frustrated by the temporary nature of sand art, Deveau loves it.

“A lot of people wonder, ‘Oh, how does it feel knowing that your art will be destroyed soon?'” the artist said in an interview with Canada’s CBC network, adding: “…I really don’t mind it because when I’m starting it, I know what I’m in for.” 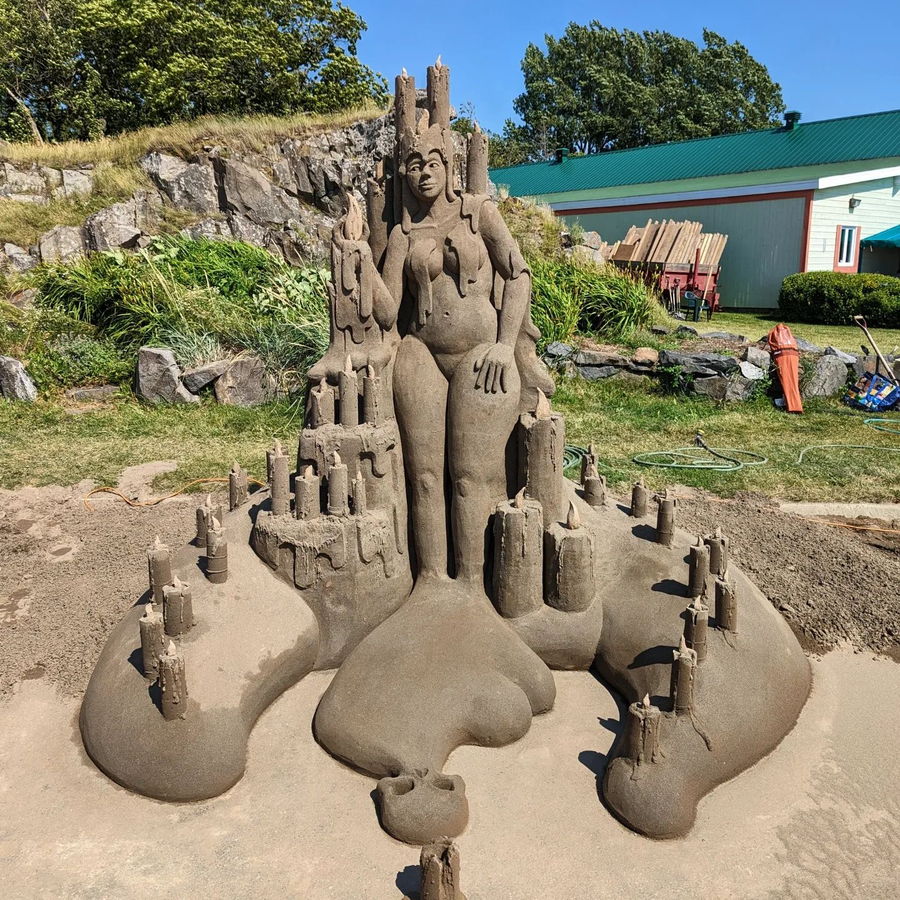 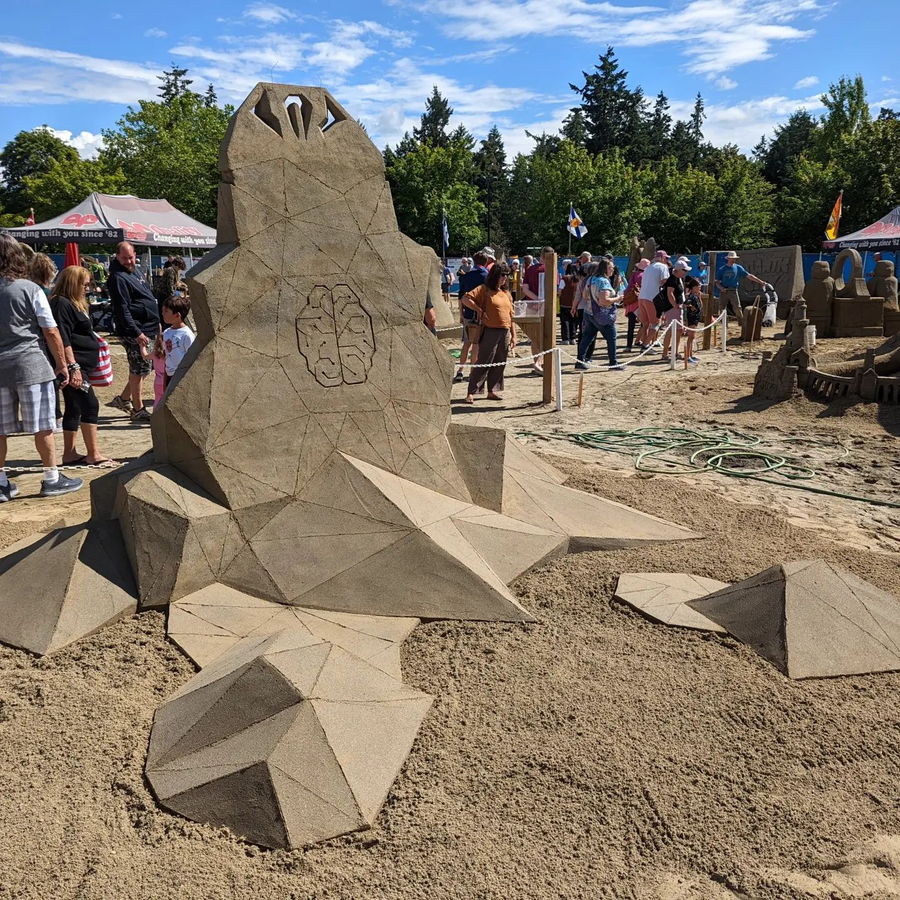 He finds sand art freeing for several reasons. “I like ephemeral art. One of the things is that they’re very quick mediums to work with,” he explains. “A two-meter sand sculpture will take me like, two or three days. If I were making the same thing out of wood or out of stone, it would take me weeks, if not months.”

Deveau also enjoys the ability to make and fix mistakes easily. With sand, he says “you can scratch it off and start again or try something new. The commitment is not so high. If you’re going to be working on a piece for four months, you know, if suddenly you don’t feel like doing it anymore or if you’re not into it, well, you’re stuck with it. But with sand, you just iterate a lot and then you’re always working on something new.” 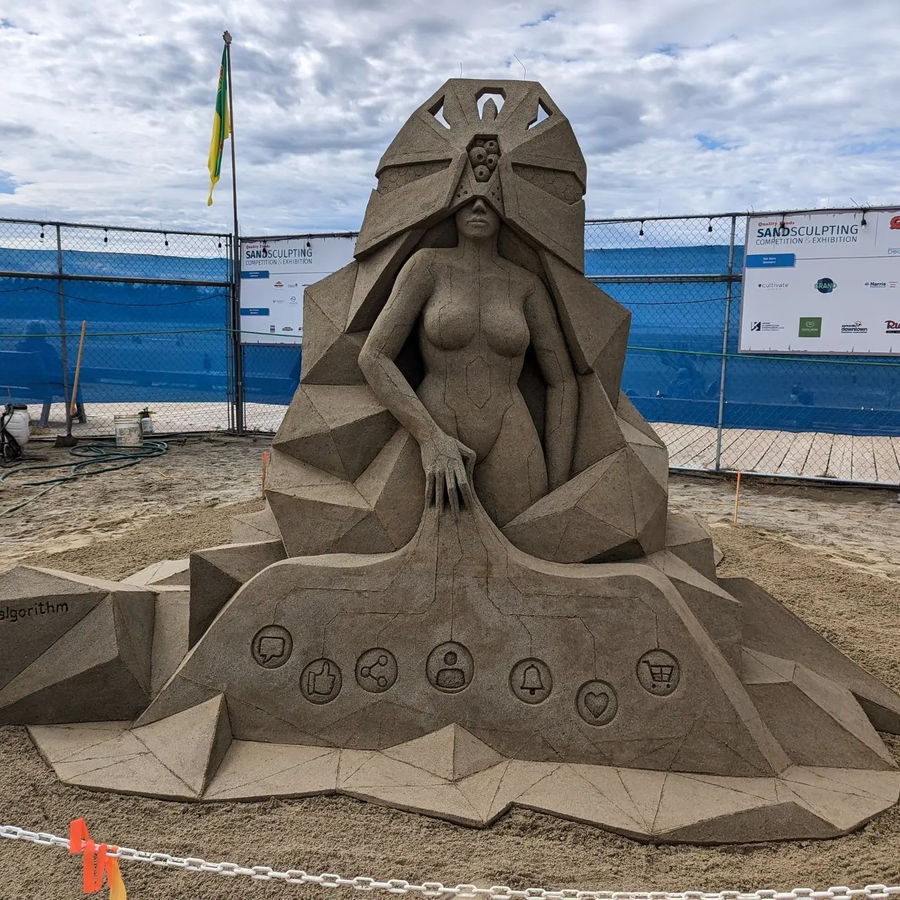 His particular brand of sand art has a harder edge than most of the competition. Skulls, disintegrating heads, and skeletal creatures are prominent motifs in Deveau’s work.

“I like to jokingly say that my inspiration is philosophy, death metal, and video games,” Deveau says. His influences include H.R. Giger, the artist who created the creature from the Alien movies. Deveau also incorporates themes from Japanese fantasy role-playing games, adding: “Also, I like anything that has a death metal or black metal aesthetic — that is dark and sometimes a little bit disturbing.” 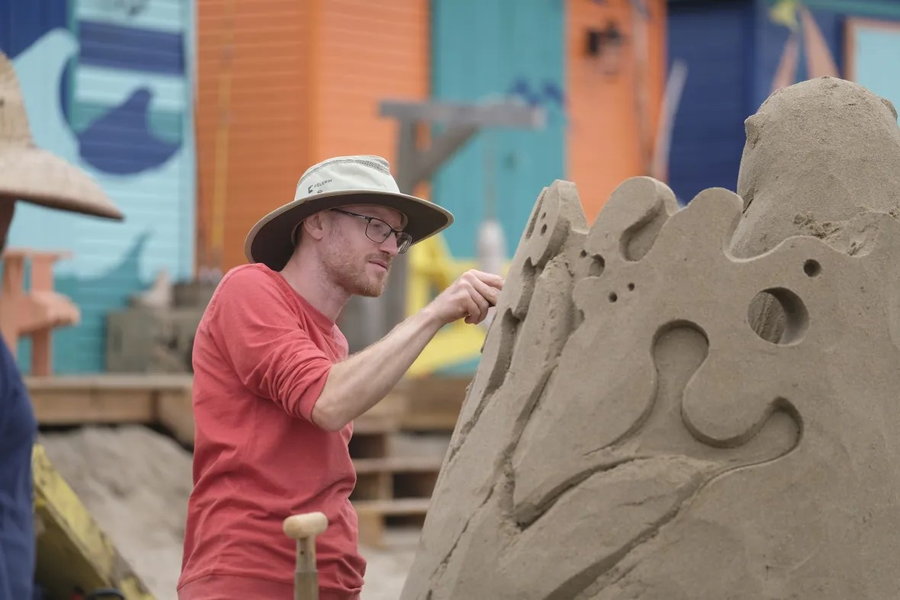 “I know there’s a lot of other artists that are doing that style in different mediums, but when it comes to sand, this has become my signature style, so maybe that’s what makes me unique,” he says. “Sand sculpture is often a bit more family-oriented, so my style may kind of clash with what’s expected.”

The artist’s horror-laced creations have at times been too much for the judges, but his vision eventually grew on them. “All the stumbling blocks that I came across just became fuel for the energy to do it better,” he confesses.

The second season of Race Against the Tide aired on July 10th, 2022. The winner will be named in the last episode, set to run on Sunday, September 11th. 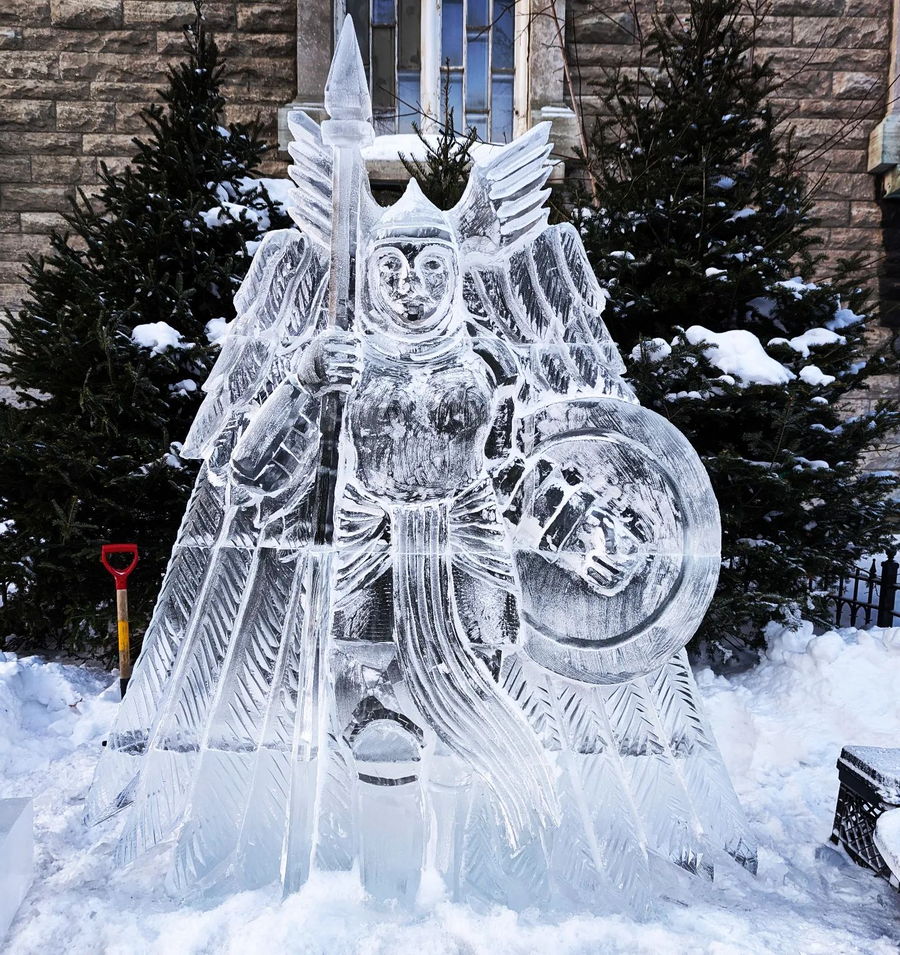 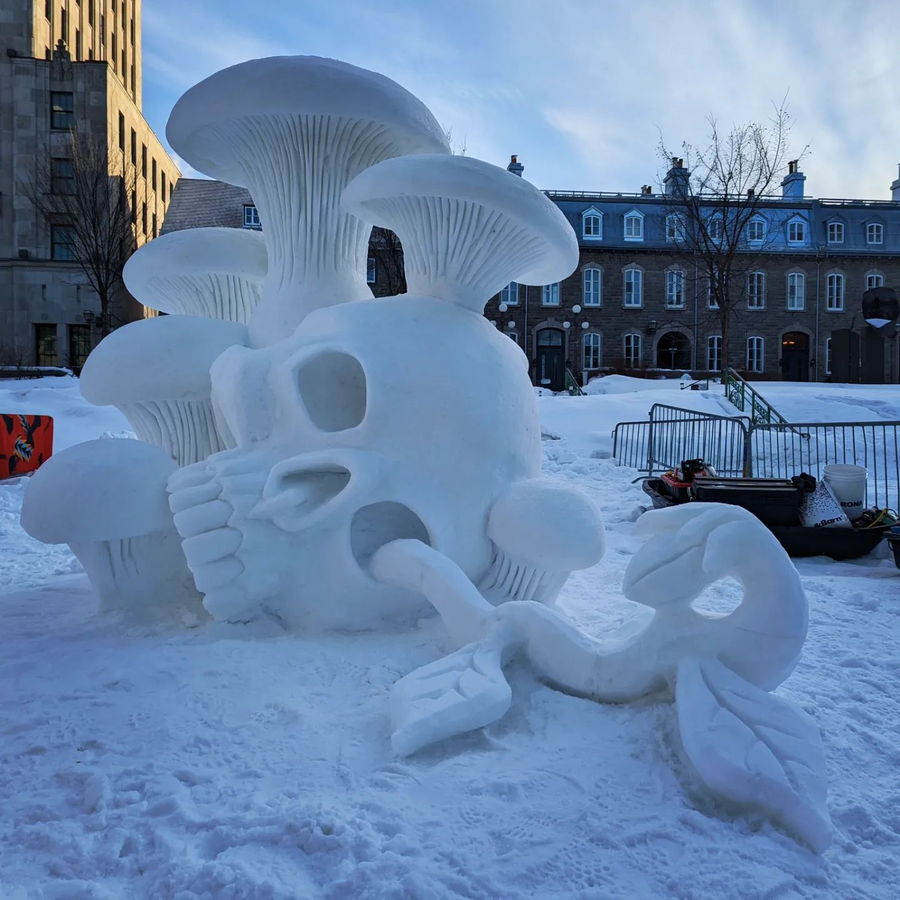 Fans can check out Deveau’s amazing sand art, as well as his ice, snow, and wood sculptures on his Facebook and Instagram pages.