A simple but elegant design, thoughtful choices in local materials, and careful attention to interaction with the climate are reason enough to laud this new school in rural Brazil. But what stands out most about “Children’s Village,” located in the remote community of Formoso do Araguaia, is just how much care the young architects from Aleph Zero took to address the needs of the disadvantaged students that the school would be serving. In fact, the firm’s approach is so notable, it earned them the 2018 International Emerging Architect Award from RIBA (the Royal Institute of British Architects). 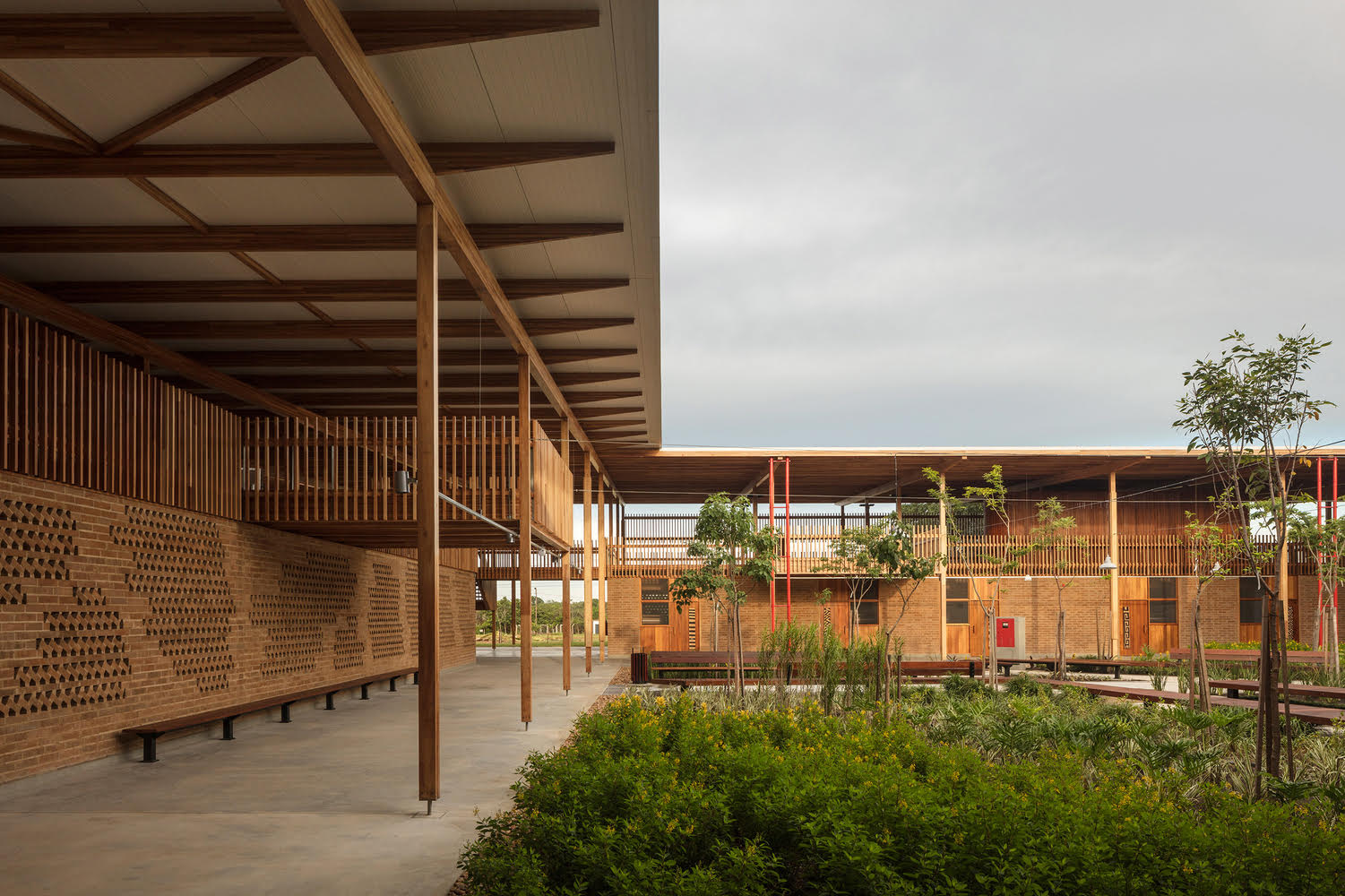 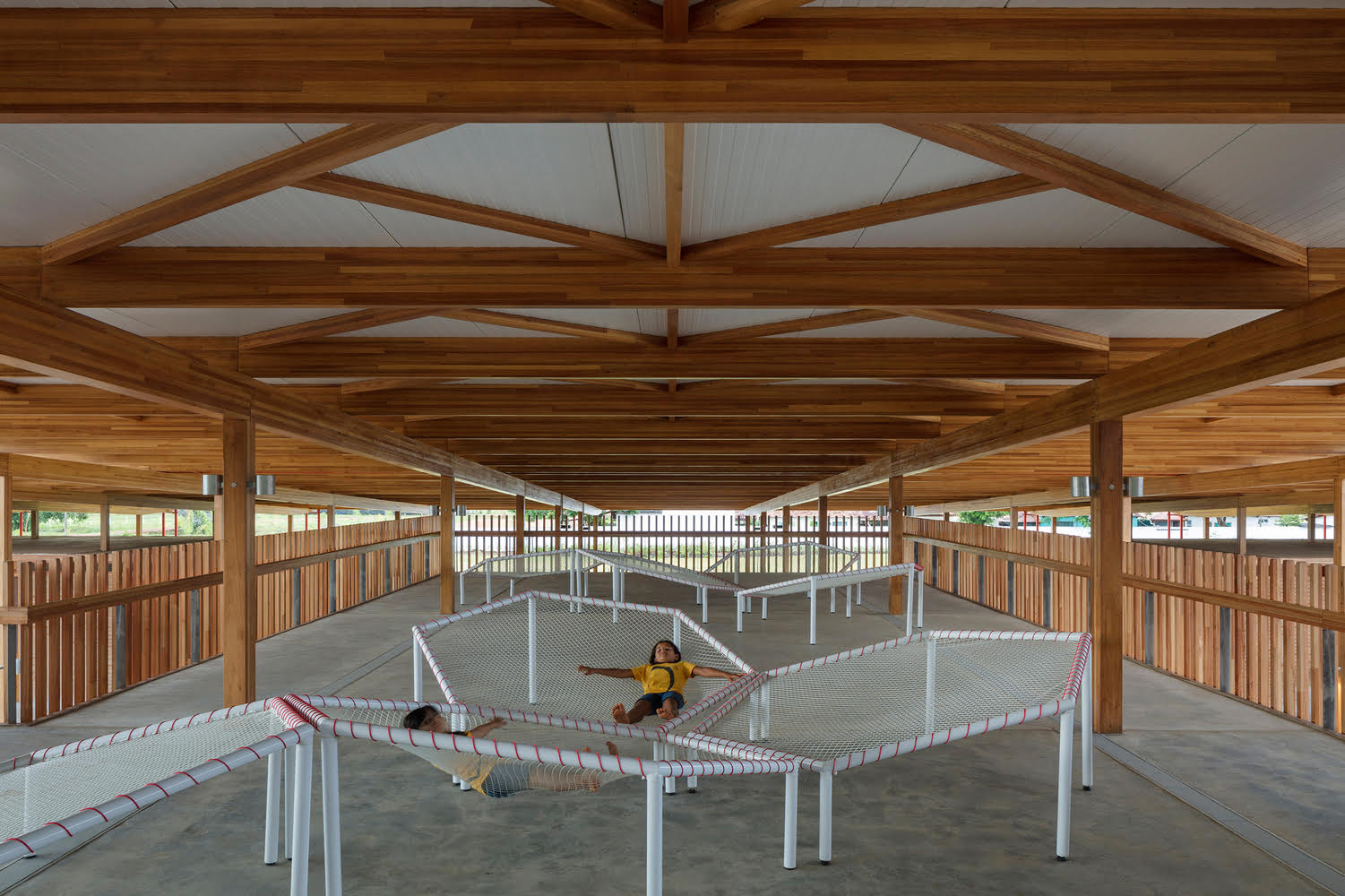 The school’s setting is a particularly harsh one in terms of weather. In an interview with CNN, the architects remarked that its exposed savannah has two seasons: summer and hell. It’s intensely hot for much of the year, and the summertime often brings torrential rain. Still, the building needed to be both low-energy and comfortable, so the firm created thick insulating walls out of local soil — formed into bricks and sun-dried on site — and covered the entire facility with a thin metal roof, leaving many of the interior spaces open to the breeze.

The Children’s Village boarding school was envisioned as a “small city” set around three courtyards, containing play areas, medical facilities, and separate living quarters for 540 boys and girls alongside its educational spaces. Commissioned by the Bradesco Foundation, it’s one of forty schools currently providing education to underserved communities in Brazil. Many of the children’s parents live nearby on a large farm also owned by the foundation, which accommodates farm workers and teachers and has its own hospital. 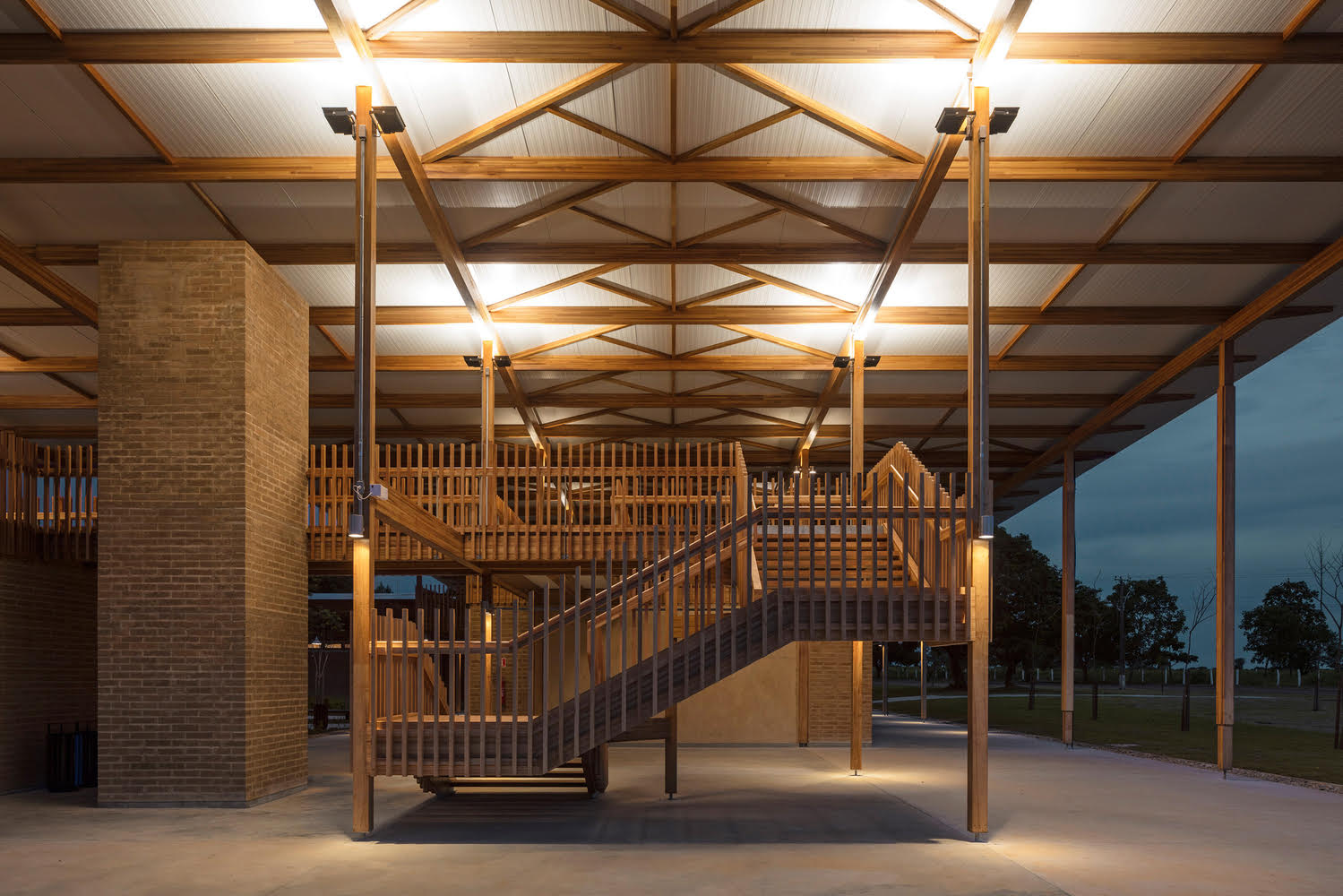 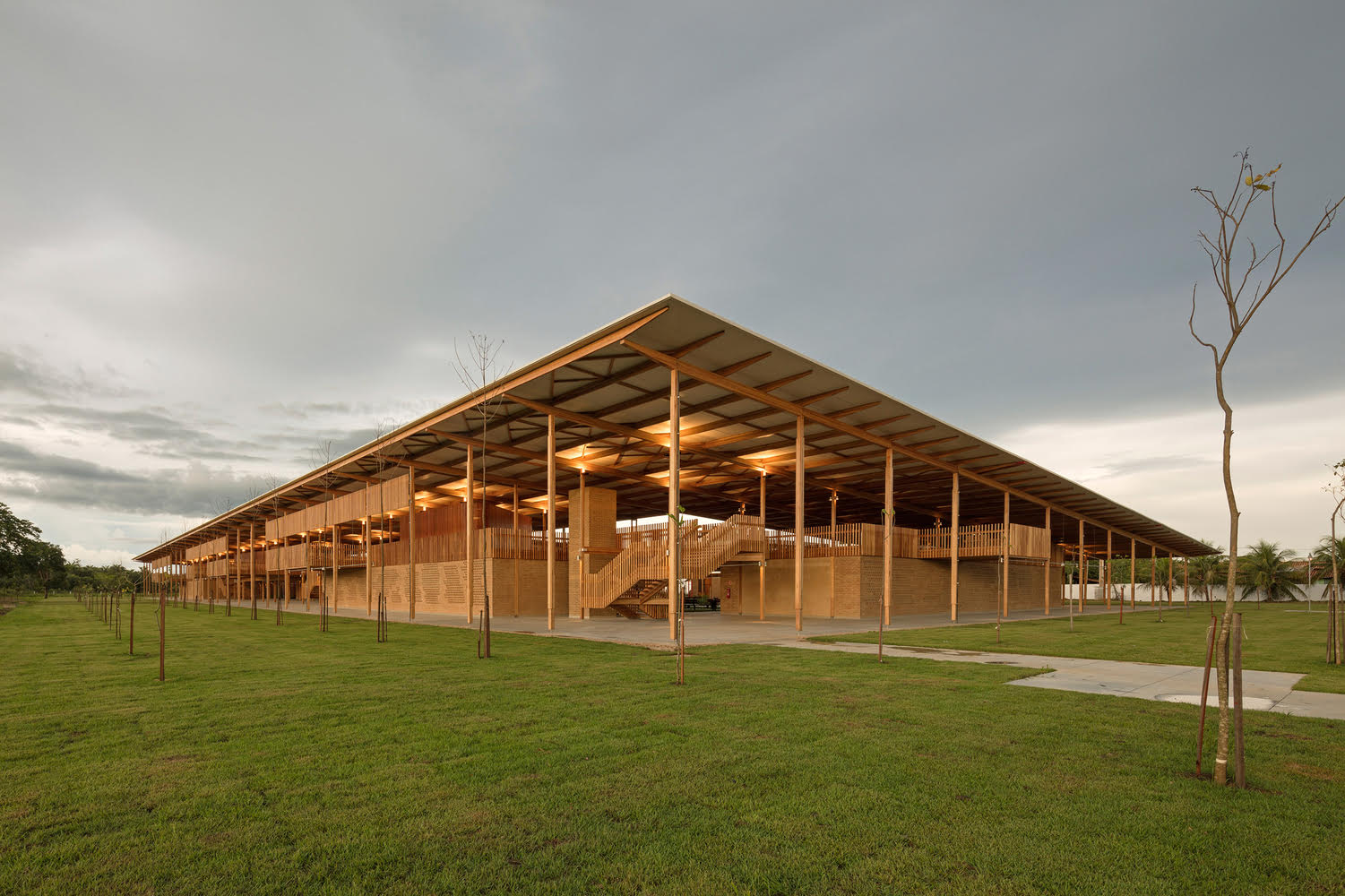 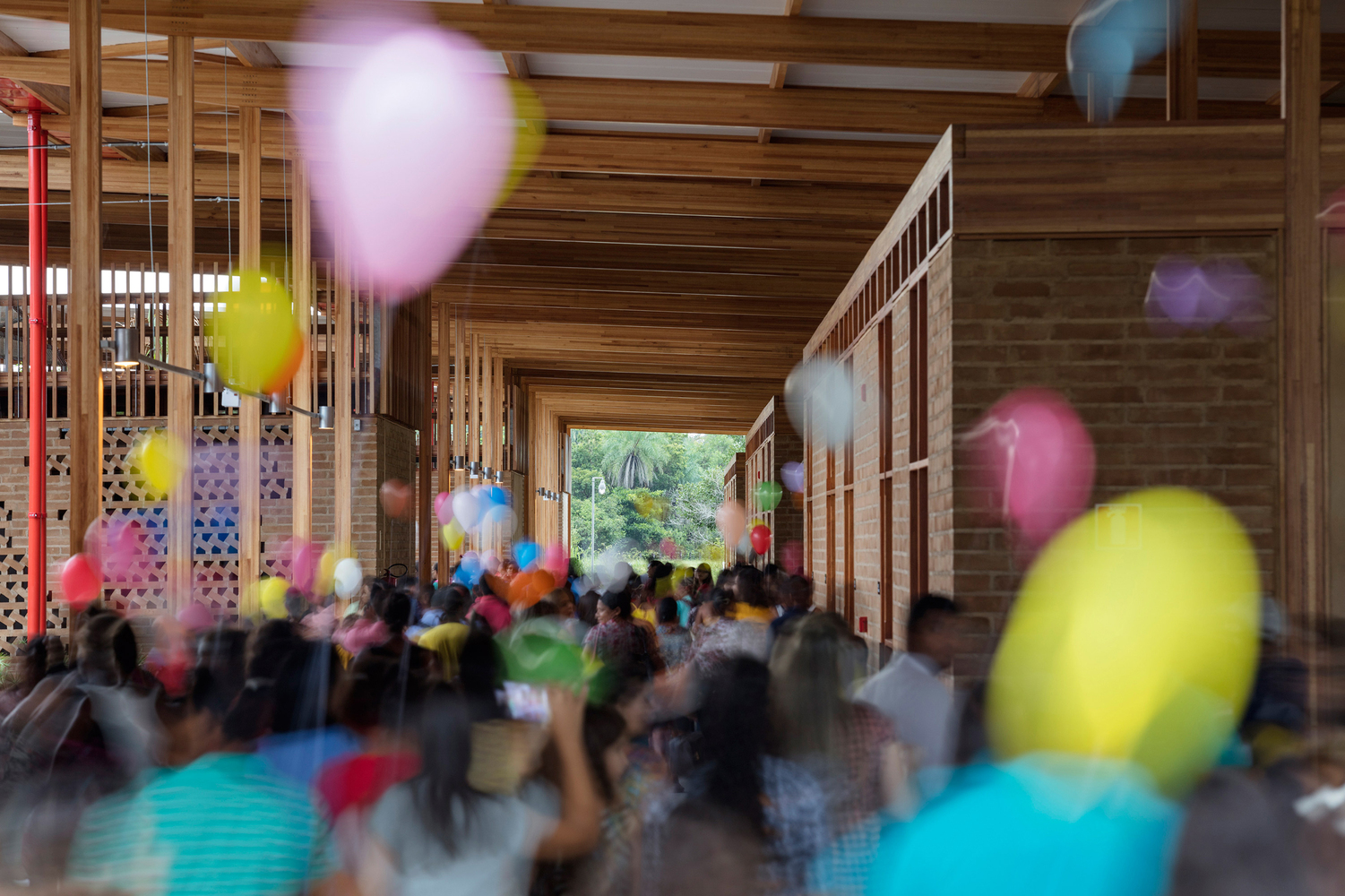 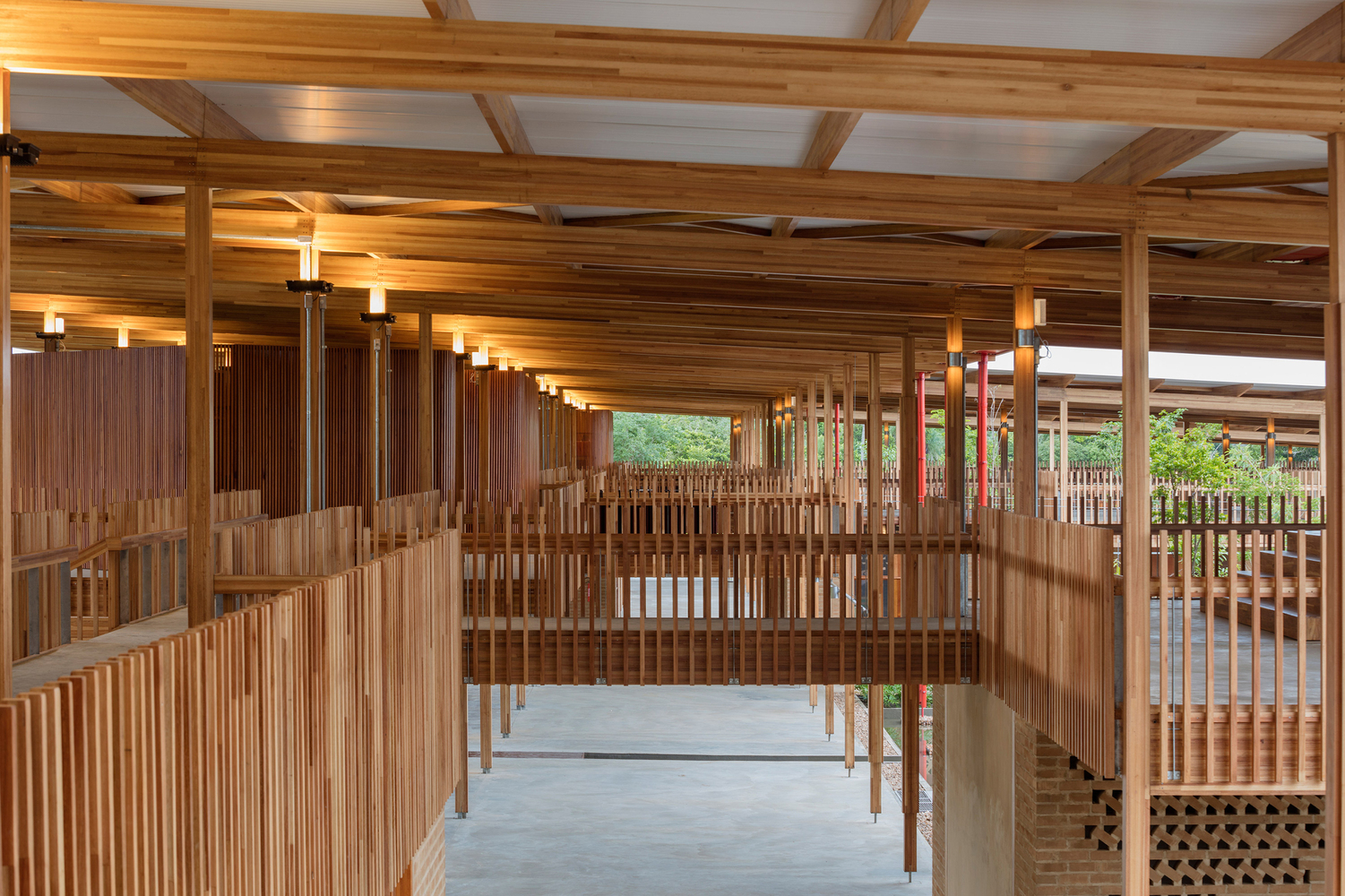 Much of the school was prefabricated and transported in pieces to be assembled on location. The streamlined timber roof canopy is made of local eucalyptus wood, as are many of the school’s elevated walkways. The architects made use of many materials and techniques particular to the region, but they felt strongly that the school should transcend local vernacular architecture to offer something entirely new. The result nods to “indigenous beauty” but prioritizes a sense of hope and belonging, offering an overall high quality of life. Amenities on site include a TV room, reading spaces, patios, balconies, and hammocks.

“There are large openings above three beautifully landscaped courtyard gardens, which are lined by the dormitories,” reads RIBA’s official website. “Each has beds for six children and is distinguished by a uniquely patterned door panel. Internally, the furniture has been specially designed, and every room has toilets, shower rooms, and a laundry, which is ventilated using perforated brickwork, handmade on site.” 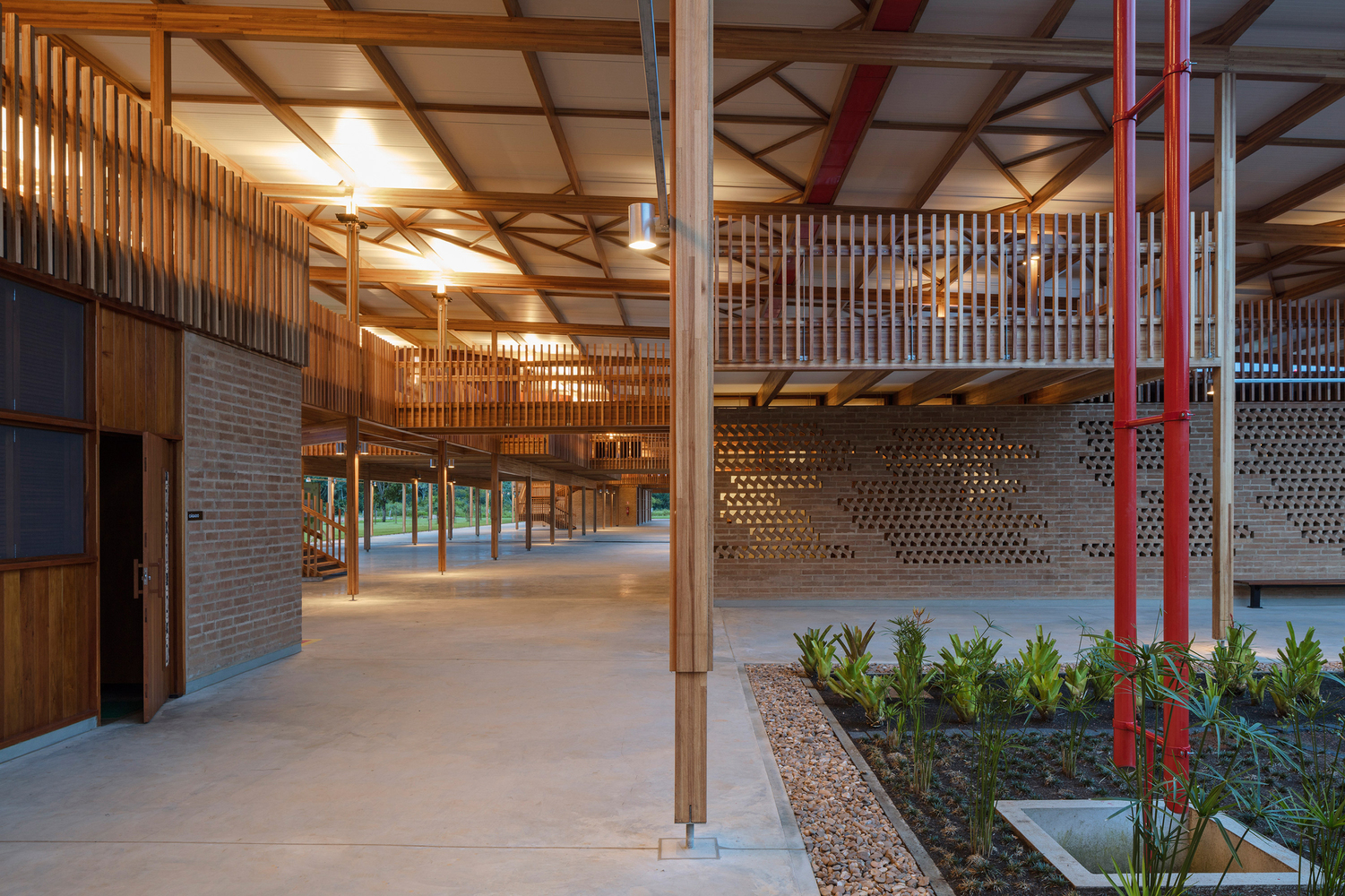 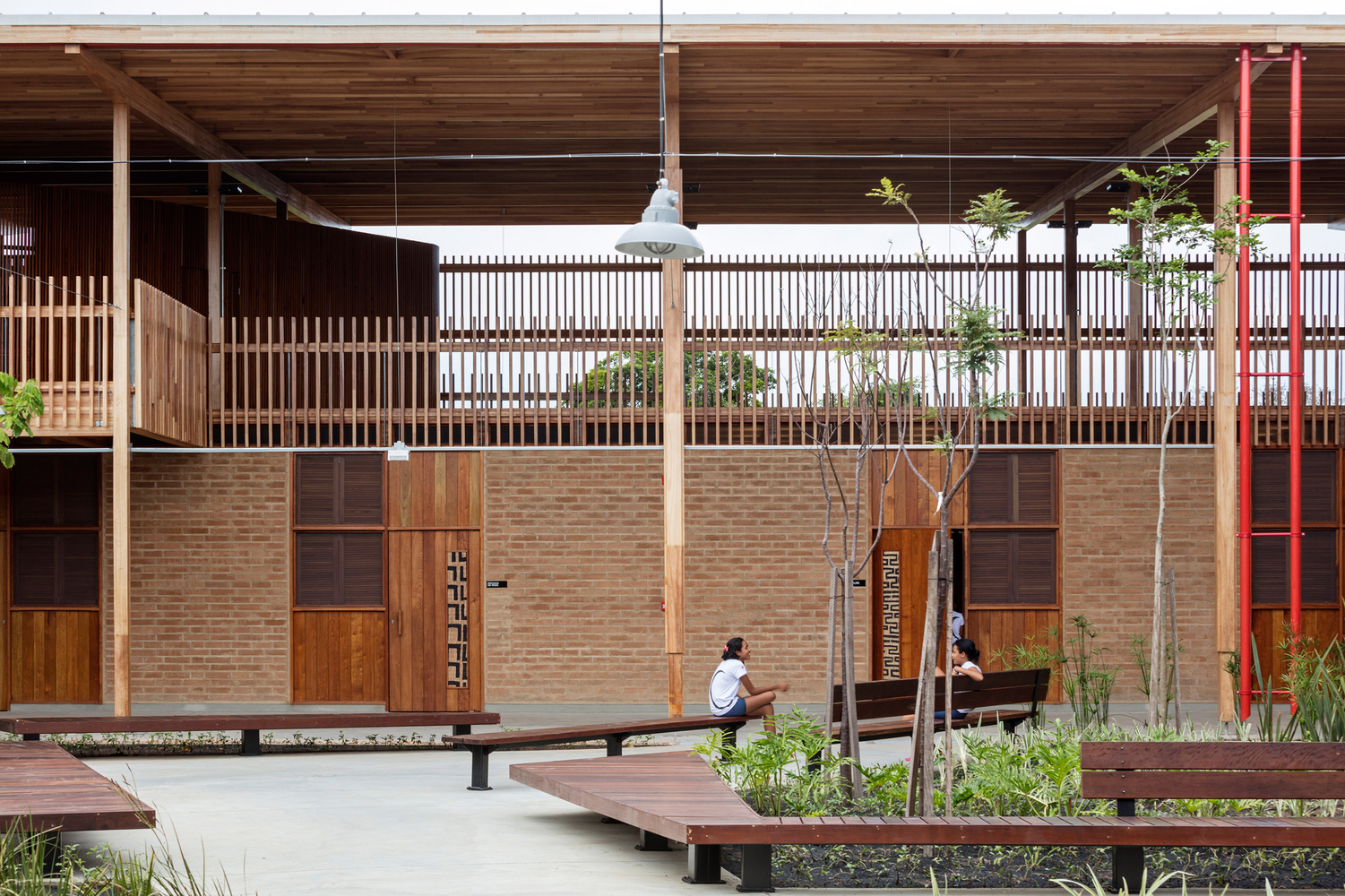 “The roof tilts from West to East, allowing space for first floor accommodation above the dormitories to the West and in the center, and is cleverly drained using pairs of colored rain water pipes. To the West a series of sculptural timber stairs rise to the upper level with its generous walkways and balconies, giving views across the site and over the courtyards. This open air space is for recreational use and inhabited [by] furniture and a stage. Slatted timber screens define three enclosed spaces. One is a study room with a large work table, whilst the others are used for relaxing and watching television.” 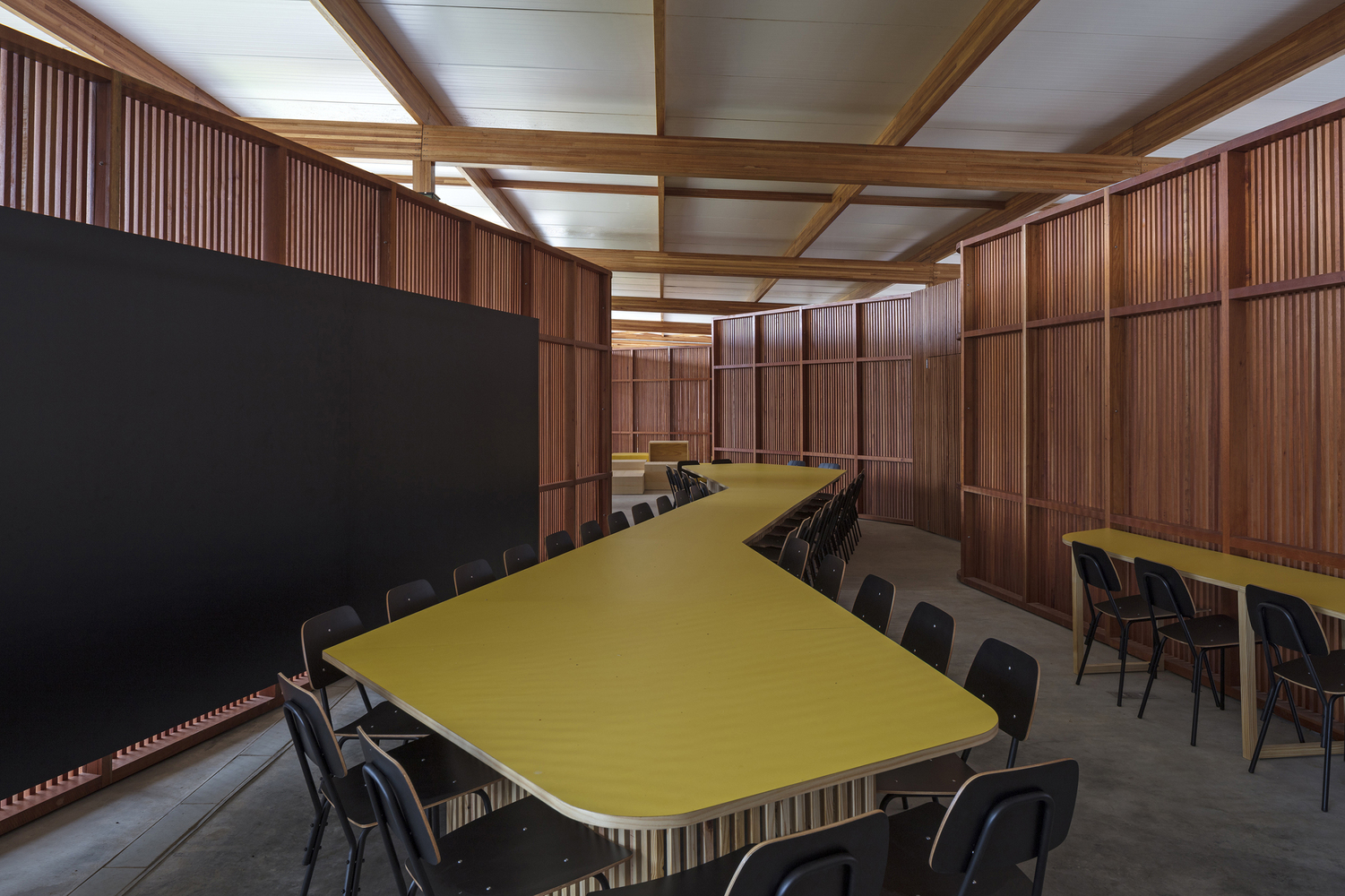 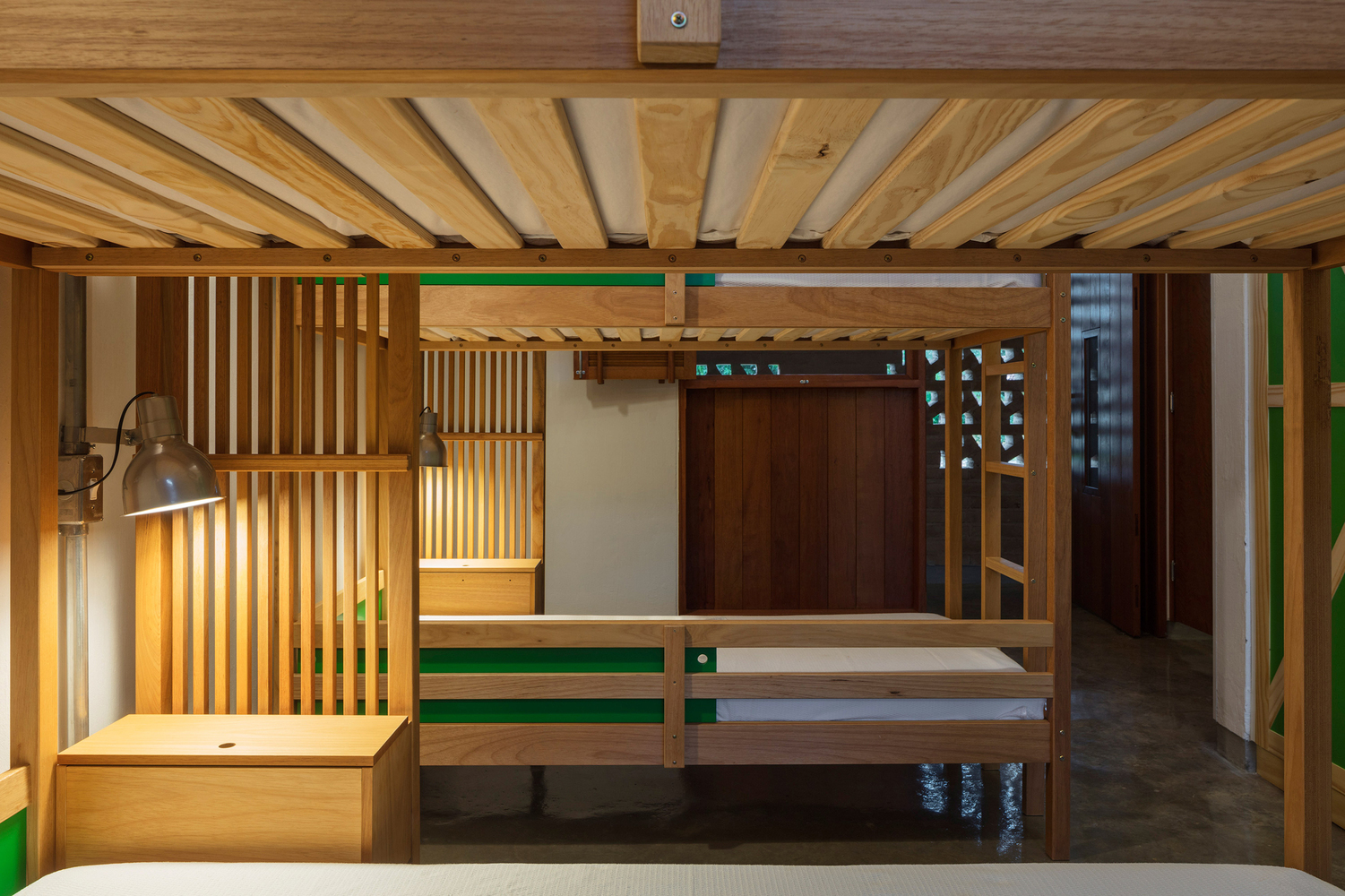 Children’s Village is modern yet approachable, and the fact that it won the RIBA prize despite its modesty points toward emerging changes in the way people value architecture. In the end, its meaning to the community around it is more important than any flashy design features.