What would a sustainable mega-city look like if it were to be built from the ground up using all modern construction methods, materials, and technologies? In the West, we haven’t had an opportunity to find that out yet, since the most desirable land has already been developed and tearing it down to start over just wouldn’t be feasible. In places that are rapidly urbanizing, however, governments and developers are teaming up to rethink how cities should be planned in the 21st century. Songdo, South Korea is one example of a currently in-progress city, and China is working on Xiongan, a new city set to be three times the size of New York. 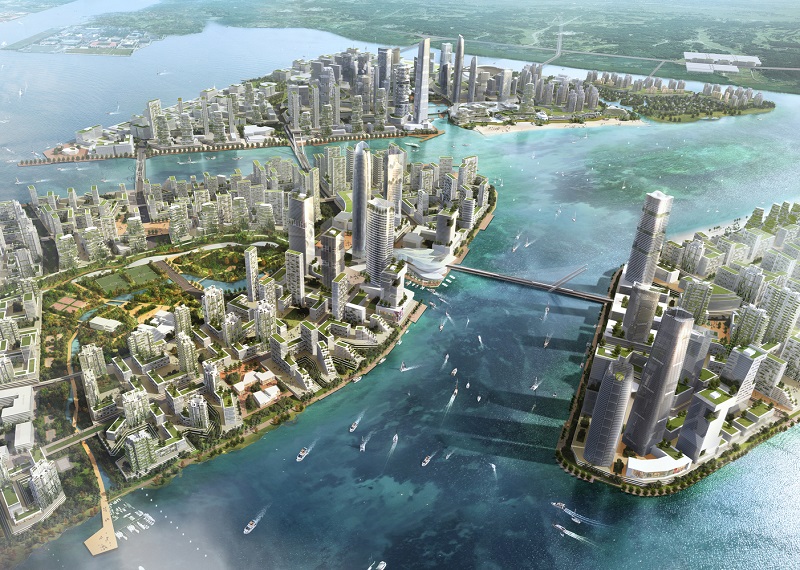 Set to be built on across four man-made islands in Iskandar, Malaysia, “Forest City” will soon join the ranks of these modern meccas. Designed by Sasaki Associates, this $40.9 billion (USD) master plan will connect major economic centers of the region and act as a “hub of commerce and culture.” Renderings depict lush, compact, and highly walkable mixed-use developments where residents can enjoy all the perks of a modern urban lifestyle while surrounded by a relaxing island vibe. 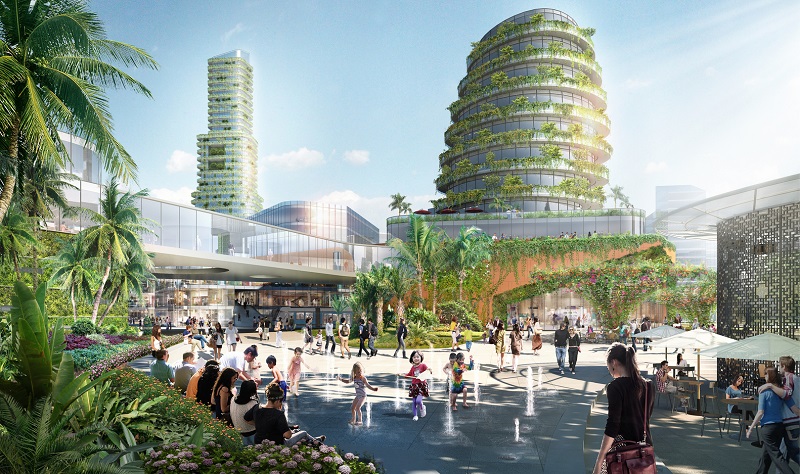 Forest City is strategically located on the southern end of Malaysia — adjacent to the booming nation-state of Singapore — and will house financial institutions, tech companies, and biotech research facilities among other industries in hopes of creating an estimated 220,000 new jobs. The developers aim to infuse the city with a broad array of cultural, civic, and recreational amenities along with multiple public transportation options, including a ferry network and light rail system that can be taken to Singapore or Kuala Lumpur. 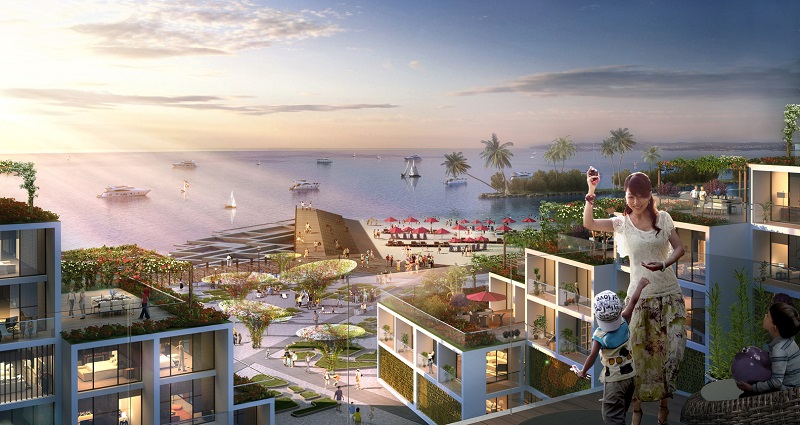 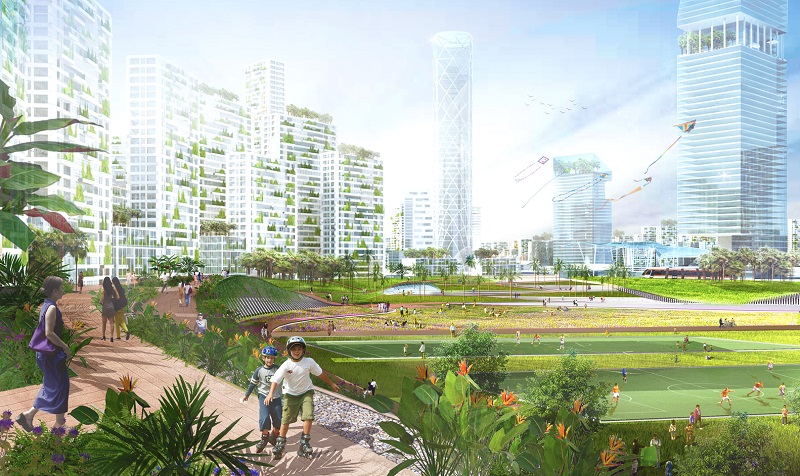 The new city’s layout is organized around the Seagrass Preserve, a marine sanctuary that protects the region’s unique plant and animal life. For anyone living on any of the city’s four islands, this preserve will be the main focal point. All 19.5 linear miles of the islands’ manufactured coastlines are designed to mimic naturally-occurring features in Malaysia’s coastal ecosystems, like tidepools and mangrove stands. The design protects against rising sea levels and supports the local fishing industry, too. 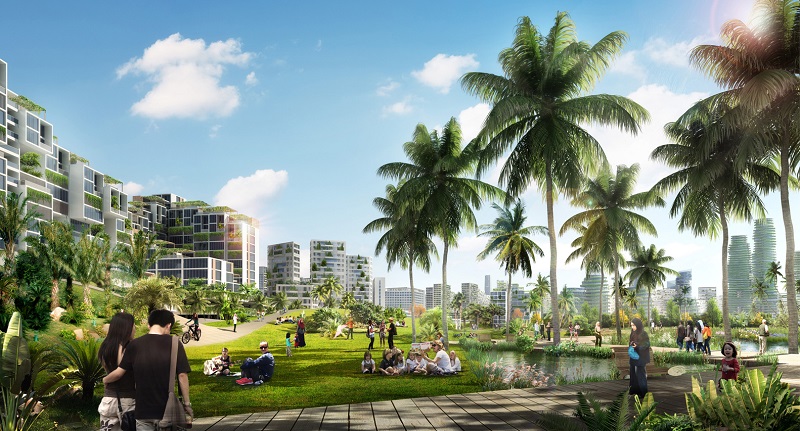 “In addition to the extensive ground-level parks and waterfront trail system, Forest City offers a new paradigm for the public realm — linking the entire development is a pedestrian-centric rooftop network of interconnected parks and gardens located on the top level of the infrastructure podium,” says Sasaki Associates. “This approach establishes a publicly accessible landscape as a continuous urban structure and is a defining element of Forest City, creating the world’s largest green roof system. Beyond a simple rooftop landscape, the podium parks provide native habitat zones, filter and cleanse stormwater, and provide recreational opportunities in an entirely automobile-free public realm.” 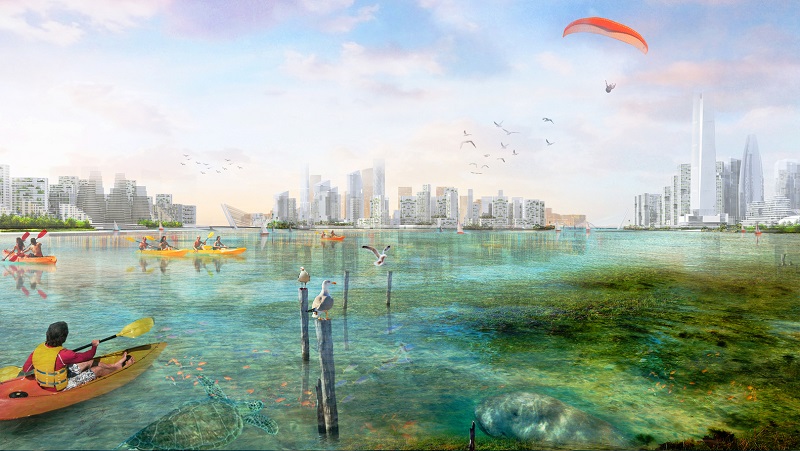 “Designed to prioritize pedestrian connections, infrastructure related to vehicular traffic is located on the ground level, while a contiguous system of public space forms a new public realm adjacent to transit stations on the top level of the infrastructure podium. Throughout each island, density and civic uses are organized around these transit centers, ensuring the majority of Forest City’s future population will live within a five to 10-minute walk of public transportation.” 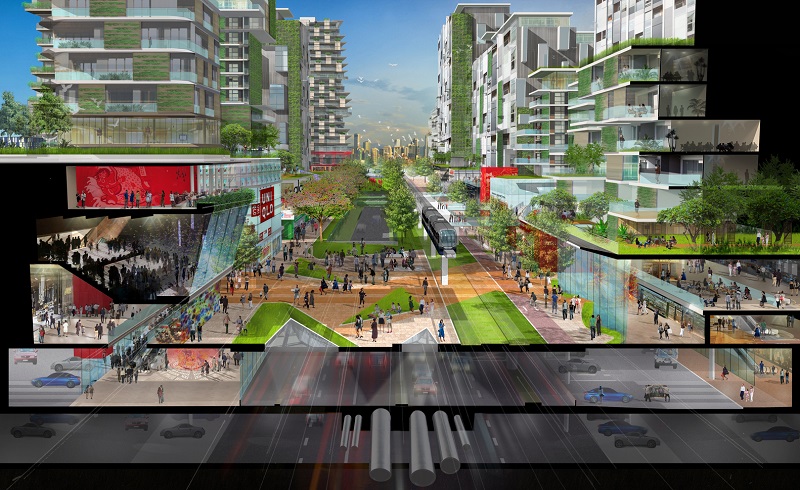 The developers hope to attract an international population interested in living and working in a sustainable urban environment with all the perks of a metropolis like New York, Beijing, or Jakarta. Sounds pretty cool, right? Of course, like all cities throughout history, Forest City won’t pop up overnight. Sasaki is aiming for a completion date around 2036.