Suspended beneath an old abandoned railway bridge in Pardubice, Czech Republic, the Black Flying House invites anyone walking by it to make a decision: will they attempt to go inside? More pertinently, how does one even get inside? 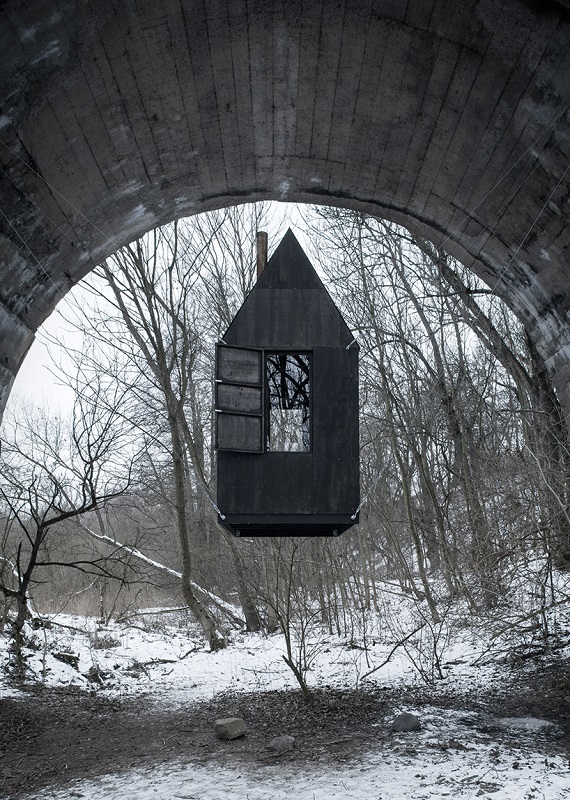 This tiny hut-like dwelling hangs in midair and is too high up for anyone to enter without at least a little assistance. The surrounding area bears a foreboding atmosphere, as if daring the most courageous of passerby to attempt an entry into the house. Even if you do muster the nerve to go in, it seems like you’ll have to come up with an inventive approach. Lucky for all of us, the architects who designed this eerie installation have hidden a perfectly sized ladder nearby. 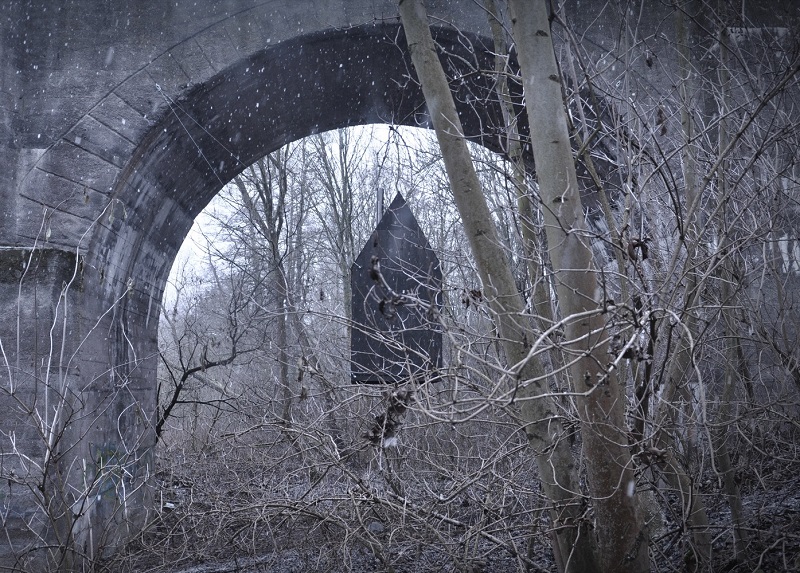 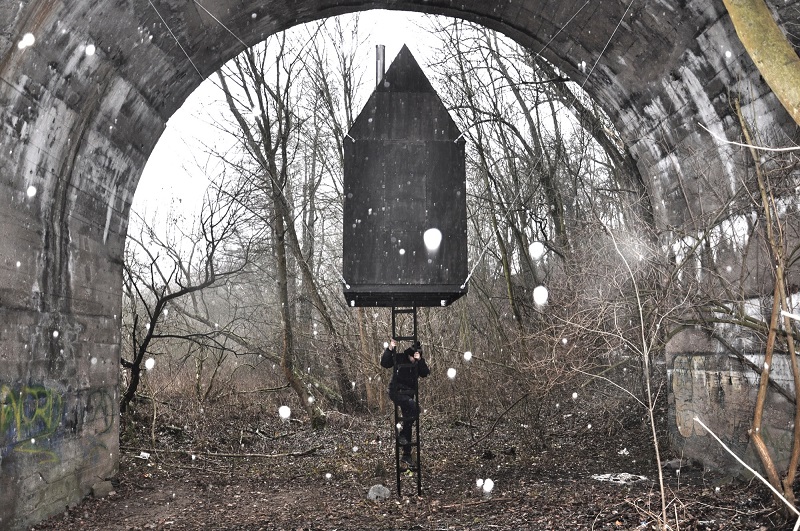 Pardubice is situated in the Czech Republic’s Eastern Bohemia region, an area that was mistakenly used to name the popular French art movement of the 19th century. The Wikipedia definition of “Bohemian” reads: “Bohemianism is the practice of an unconventional lifestyle, often in the company of like-minded people, with few permanent ties, involving musical, artistic, literary, or spiritual pursuits. In this context, Bohemians may or may not be wanderers, adventurers, or vagabonds.” This description perfectly reflects the free-floating Black Flying House, which is sure to reward any artistically-inclined wanderer who stumbles upon it with an unforgettable experience and source of inspiration. 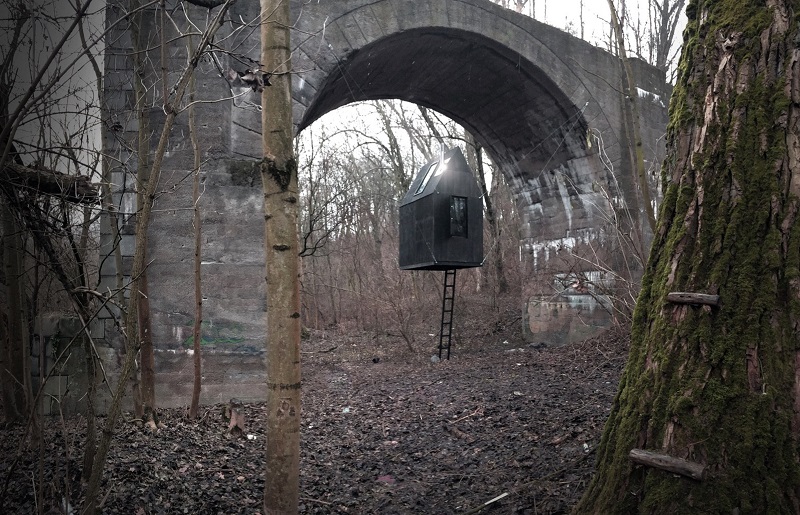 Boasting a steeply-pitched roof, a set of rectangular windows, a door, and even a chimney, this wooden structure has been suspended from thick steel cables, which in turn have been attached to the underside of the bridge overhead. The Black Flying House has a shadowy appeal, offering no clue as to what will be inside its walls until a curious adventurer locates the ladder and sees for themselves. 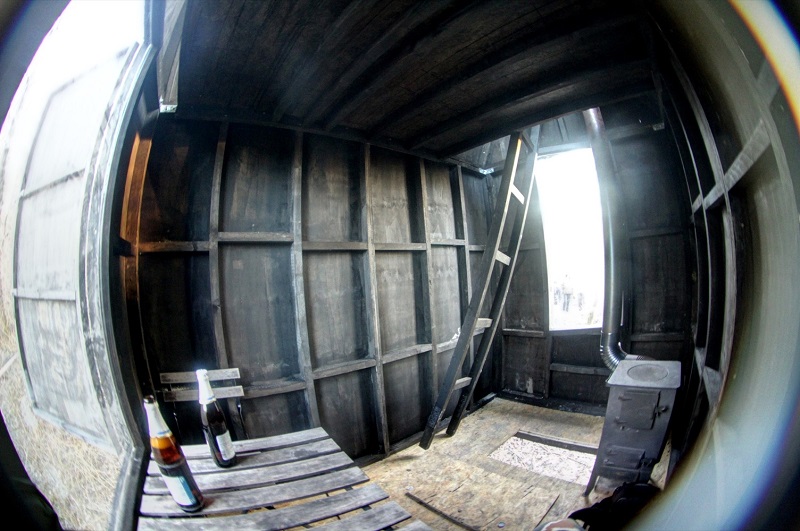 Designed to be a “conundrum that encourages passersby to think,” Black Flying House is the brainchild of H3T Architekti, a design studio founded in 2009 by the award-winning architects Vit Šimek and Štěpán Řehoř. The duo’s website explains, “[Our] projects are often temporary and located in unexpected contexts that eventually generate interesting situations and create new opportunities.” 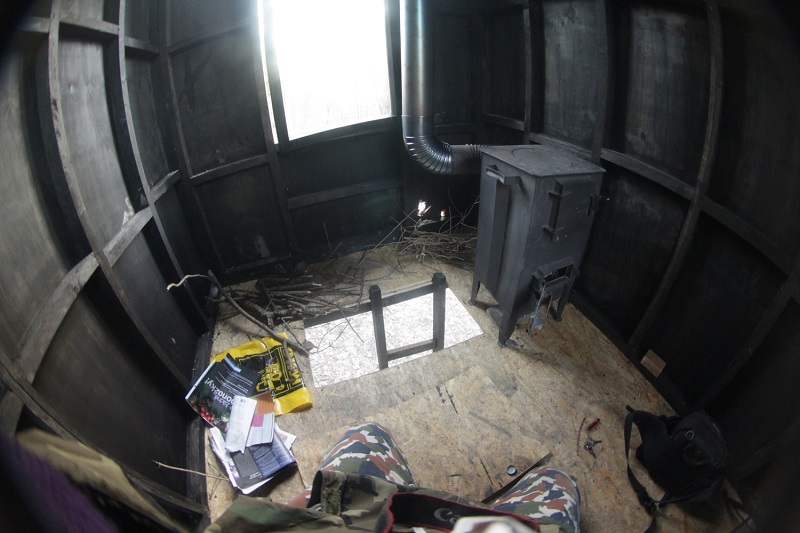 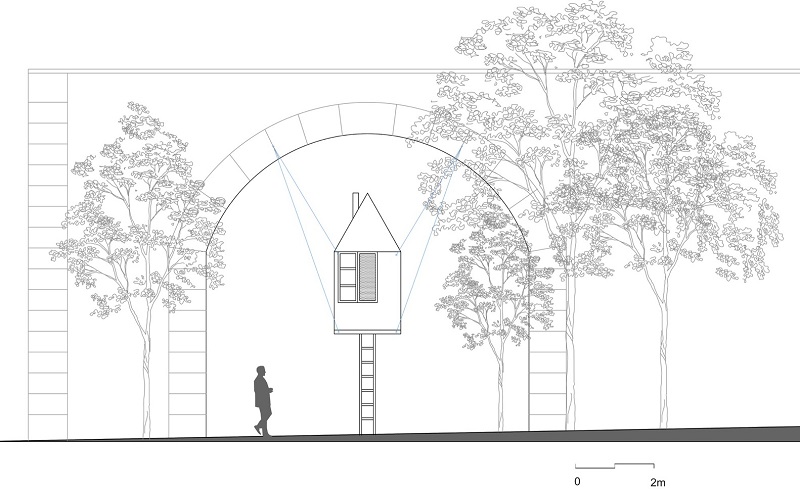 Only a fifteen-minute walk from the city center, the Black Flying House is much less isolated than it might appear to be in photos. Once you’ve made it inside the installation, you’ll find a room that contains a stove, two chairs, and a sleeping loft. It may be small, but it makes for a great lookout point and temporary place to keep warm. If you’re feeling up to it, you can even stay in the house overnight! The architects describe it as “an installation that, with its austere rendition, responded to the mysterious atmosphere of the environment. We hoped it would bring some interesting experiences or feelings.”
Sadly, the aforementioned ”temporary nature” of H3T Architekti’s projects also proved to be true in this case. Just 39 days after it was first installed beneath the railway bridge, the Black Flying House had to be taken down in accordance with an order from local authorities.
All photos by Tomas Rasl and Martina Kubesova