Ever heard of Folkestone, England? Chances are, you haven’t – yet. But all that’s about to change once the sleepy seaside port town on the English Channel opens F51. Designed by British architect and local design denizen Guy Hollaway, this multi-story skatepark will be the first of its kind anywhere in the world, not to mention a major boon to the small English town. 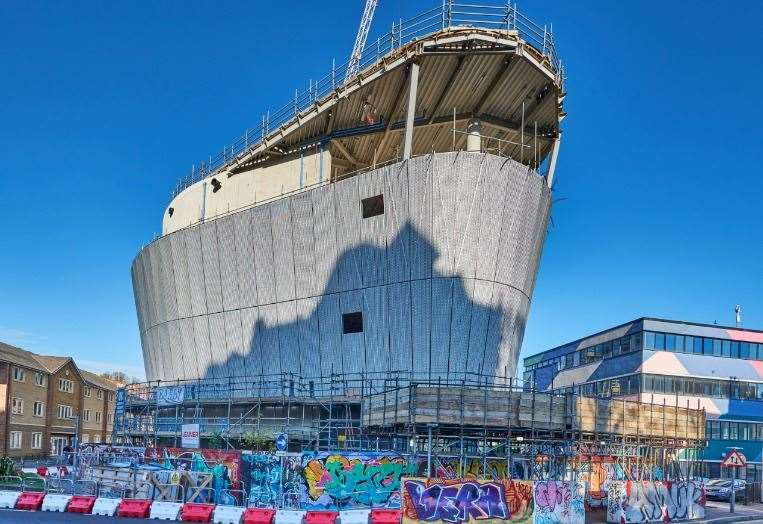 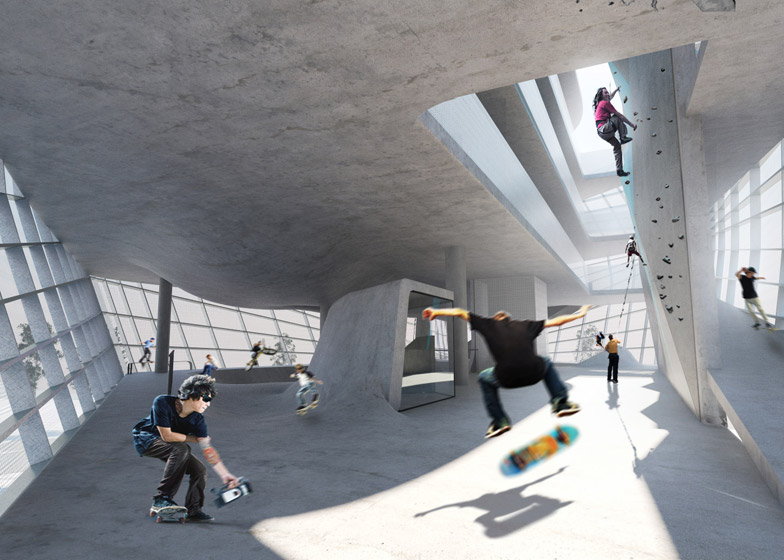 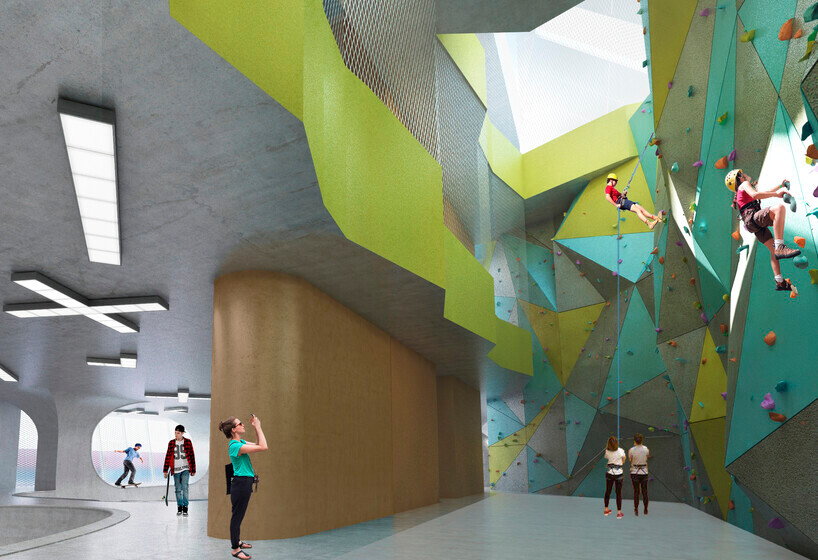 Hollaway, who was commissioned for the project by billionaire Roger De Haan, recently told Dezeen that “We see this as an opportunity to put Folkestone on the map. To the best of our knowledge this has never been done anywhere else in the world.” The park’s ambitious three-story plan certainly aims to impress, offering facilities for both skateboarders and BMX riders to hone their freestyling and tricks. There will also be a boxing ring (operated by a local boxing club), an 11-meter-high climbing wall, a café, a first aid center, and a rooftop terrace present to complete the ultimate skaters’ paradise. 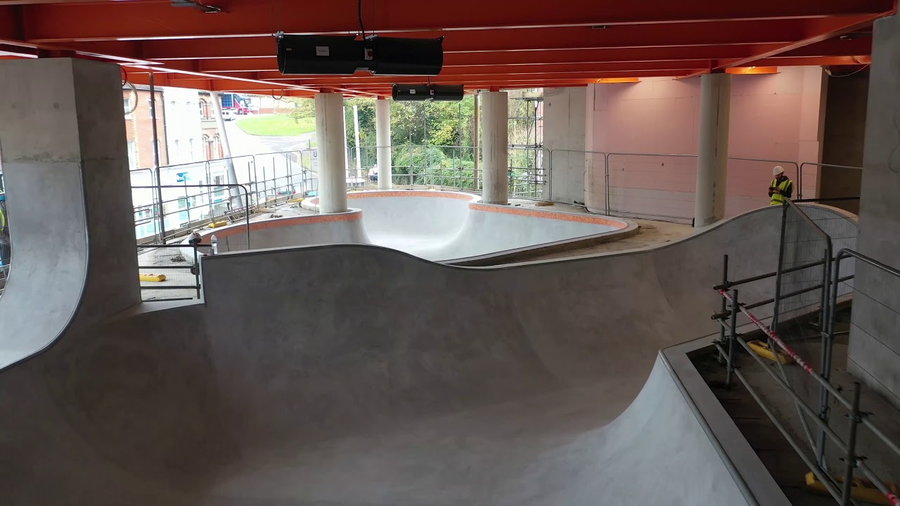 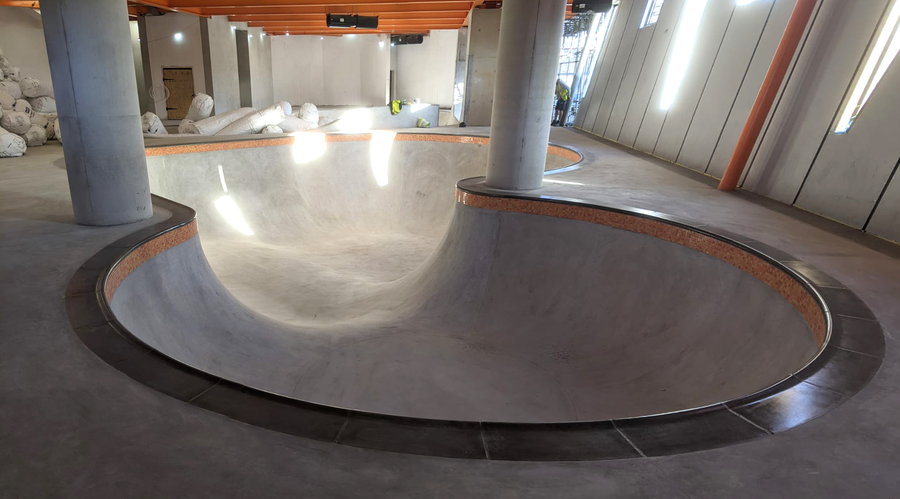 Located on the site of an old bingo hall in the center of Folkestone, the project is meant to be a lot more than a fun, tricked-out space and architectural centerpiece. More importantly, Holloway wants F51 to be a draw for the area’s youth through engagement and community involvement, with the end goal of revitalizing and re-energizing the small town of Folkestone. “If you make childhood meaningful through education, sport, and recreation, then it’s more likely [youth] will invest in their town and the future…that is what true regeneration is about,” the architect said at the outset of the project.

Replacing the old harborside skatepark also owned by De Haan, the park will definitely be a striking addition to the town. Currently under construction, the structure’s three stories tower above the rest of nearby Tontine Street, looking eerily similar to the prow of an enormous concrete ship. A true work of art described as a “giant piece of pottery” by local artist Matt Rowe, who has been documenting F51’s progress since the beginning, the skatepark was created using polystyrene molds set with rebar, which were then sprayed into their more finished concrete forms. The process is not only artistic (think ceramics), but a crucial part of one of the park’s signature features: a suspended concrete bowl located on the first floor that’s perfect for the likes of BMXers and skateboarders looking to trick, jump, and ride with reckless abandon. 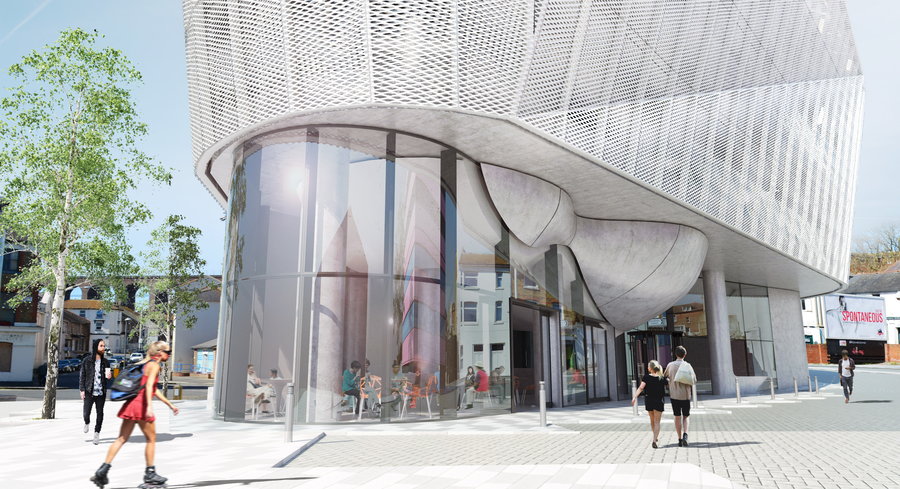 The open space, with its “refined skate surfaces” and reinforced concrete pillars, will also be a fully immersive experience, with the acoustics playing an important part in creating the park’s enigmatic and energetic ambience. Initially described by Halloway as a “controlled adrenaline facility,” the park offers opportunities for boarders and BMXers of all skill levels to showcase their skills. And even though it’s being designed with safety in mind, the park will nonetheless offer an exhilarating way for locals to ollie, 360, and shred to their hearts’ content – all in the small English town of Folkestone.