These days, Elon Musk has more of a reputation for mouthing off on Twitter than he does for successfully helming his various companies. The Tesla and SpaceX CEO, who is now also the new owner and CEO of Twitter, recently used the social media platform to lash out at Apple and its chief executive Tim Cook. 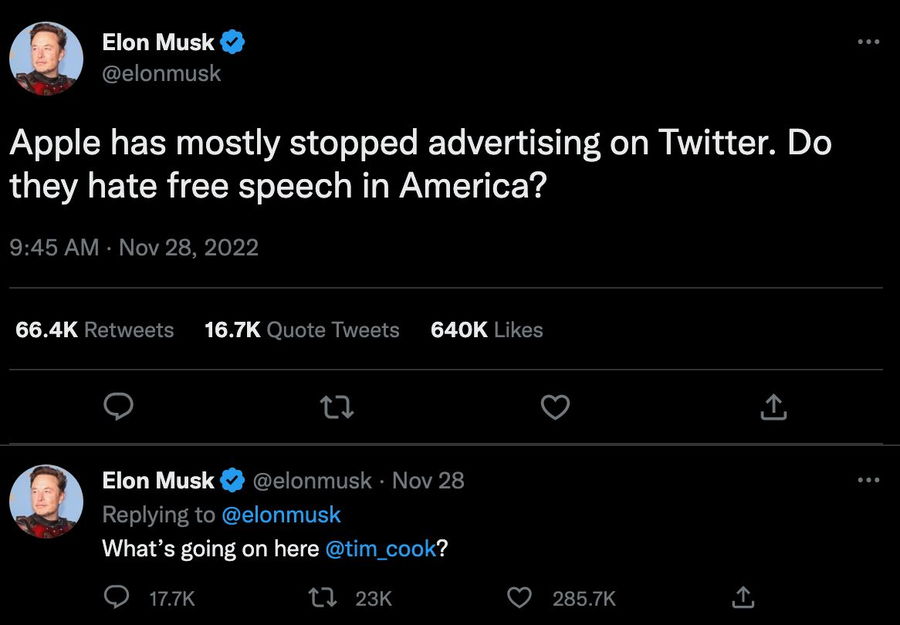 His complaint? “Apple has mostly stopped advertising on Twitter,” Musk wrote. “Do they hate free speech in America?” Musk then alleged that Apple threatened to remove Twitter from its App Store and criticized the company for charging fees to developers who create apps for its products.

Going so far as to claim that the “future of civilization” was at stake, Musk theorized that Apple might ban the Twitter app in response to his new content moderation policies. A self-described free speech absolutist, Musk first said he would set up a “content moderation council” with diverse viewpoints to manage decisions like whether or not to ban users who posted hate speech.

He then changed his mind, offering to reinstate formerly banned users like ex-President Donald Trump and neo-Nazi Andrew Anglin. He also reinstated Kanye West (now known simply as Ye) only to ban him again days later for posting a Star of David with a swastika inside of it.

Musk is receiving support from several conservative and alt-right figures for his decisions, especially since publicly aligning himself with the GOP. Florida Governor Ron DeSantis piped in with comments in support of Musk during a press conference, saying any attempt to remove Twitter from the Apple App Store would be a “huge mistake” that would “merit a response from the United States Congress.” Senator-elect J.D. Vance of Ohio also weighed in, tweeting that “no civilized country should allow” Apple to remove Twitter from its App Store.

Thus far, the conflict has been pretty one-sided. Apple hasn’t publicly responded to Musk’s accusations. Data from Pathmatics, a research firm that tracks digital marketing spending, found that although Apple had cut back on its Twitter ad spending since the summer, it was still paying the company about $1 million per month.

The Twitter app has remained available for all iOS devices, but both Apple and Google have stringent policies against misinformation, hate speech, and other misconduct, having previously booted apps like Parler for breaking them. 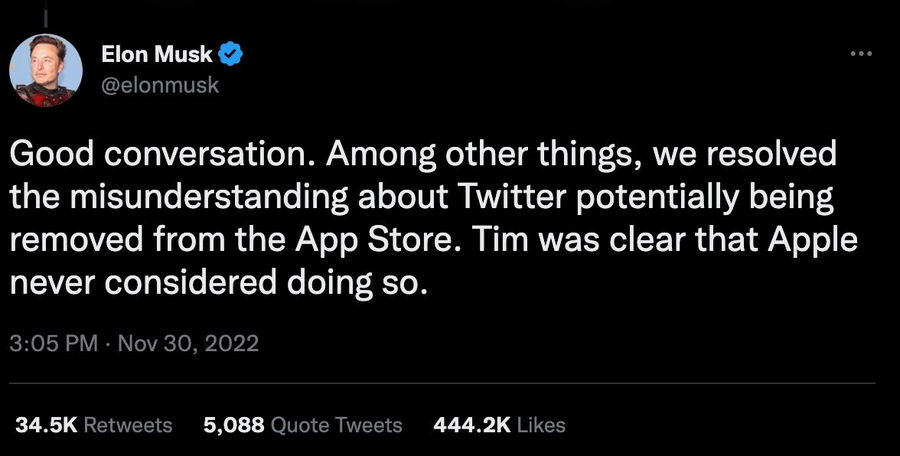 On November 30th, Musk tweeted that his war against Apple was over, at least for now. “Good conversation,” he wrote in reference to a meeting with Cook. “Among other things, we resolved the misunderstanding about Twitter potentially being removed from the App Store. Tim was clear that Apple never considered doing so.”

How Musk’s Behavior Could Affect Twitter in the Future

Musk’s choices about content moderation on Twitter have thus far complied with U.S. laws. However, the laws are a little different in the European Union, and last month a senior EU official warned Musk that Twitter would have to improve its efforts to combat hate speech and misinformation in order to avoid massive fines.

Thierry Breton, the EU’s Commissioner for Digital Policy, said that Musk agreed to comply with the rules during a video call, adding that: “Twitter will have to implement transparent user policies, significantly reinforce content moderation and protect freedom of speech, tackle disinformation with resolve, and limit targeted advertising.”

Musk’s tweets about Apple follow an erratic stream of conspiracy theories, threats, and complaints posted in the wake of his $44 billion acquisition of Twitter, finalized on October 27th. They include a since-deleted post containing baseless anti-LGBTQ theories about the attack on Paul Pelosi, and threats of a “thermonuclear name and shame” offensive against companies that have paused advertisements on the platform.

Meanwhile, the number of tweets containing hate speech and racial epithets has soared since Musk took over and fired much of Twitter’s staff, according to a report by the Center for Countering Digital Hate.