In Western Iceland, an old farm with stunning views of the Breiðafjörður Nature Reserve was in danger of crumbling into a pile of rubble in the meadow. Architecture firm Studio Bua was asked to bring it back to life, restoring its functionality without erasing the passage of time. The renewal concept will reimagine a fragmented cluster of buildings in various states of disrepair, starting with the barn, which was little more than a shell made of concrete and local aggregate rock when the project began. Today, it’s a combination artist studio and home, thoughtfully transformed into a two-story structure with a unique walled garden. 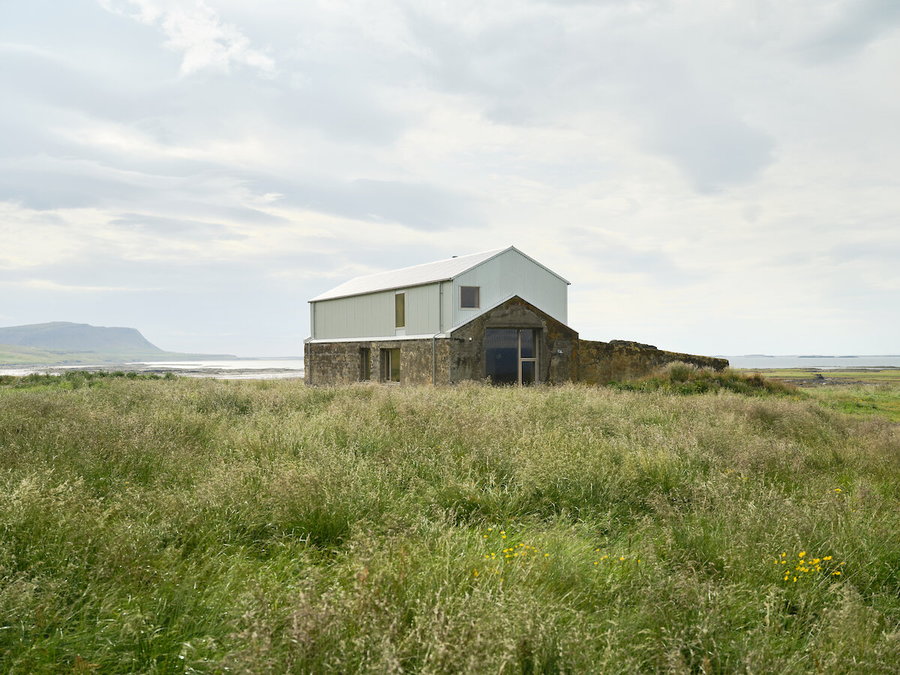 Set back from a cliff overlooking the water, the old barn structure consisted of two parts: a taller volume with gabled ends, and a wide addition off one side with a sloping shed-style roofline. No doors, windows, or actual roofs remained – just holes where they used to be. Aiming to keep as much of the concrete structure in place as possible to preserve its aged and weathered character, the architects decided to insert a lightweight two-story timber structure into the original volume, mimicking its shape. 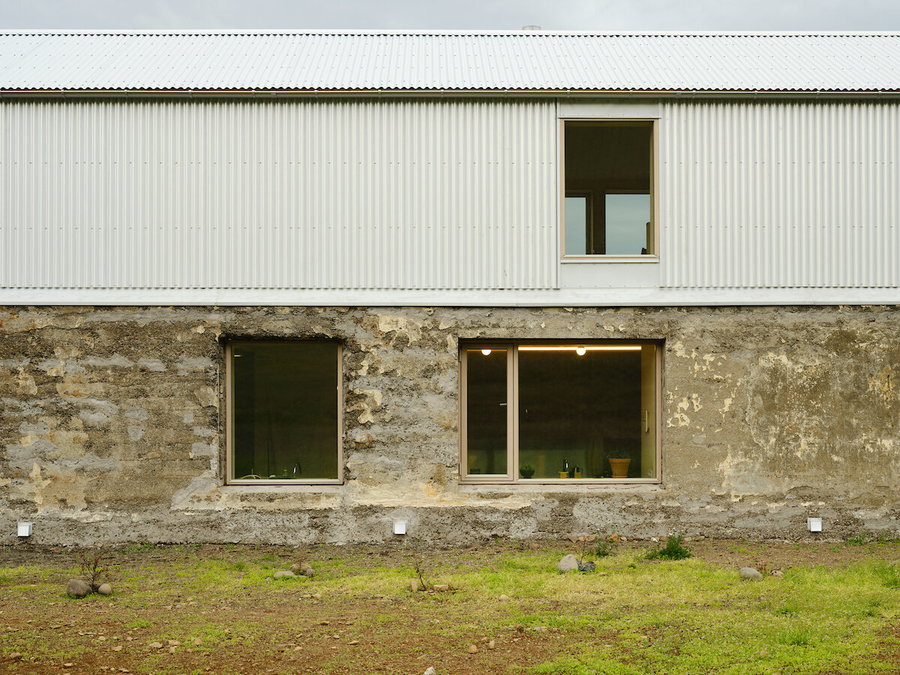 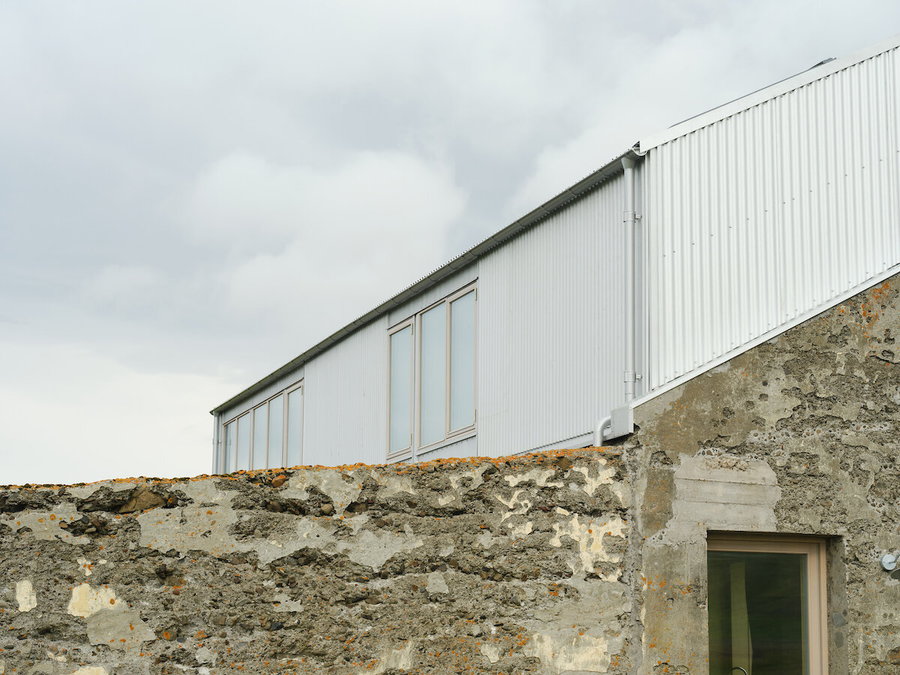 Preserving the crumbling concrete required some creativity. The old barn was made of thick and stable mass concrete, but most of its walls lacked foundations, and some were very fragile. They decided to retain only the perimeter walls, leaving them in a ruined state peppered with lichen and patchwork patterns of local pebbles. They also stabilized the existing structure and lined the barn floor with a reinforced concrete raft to ensure the home wouldn’t continue to deteriorate after the renovations were complete. 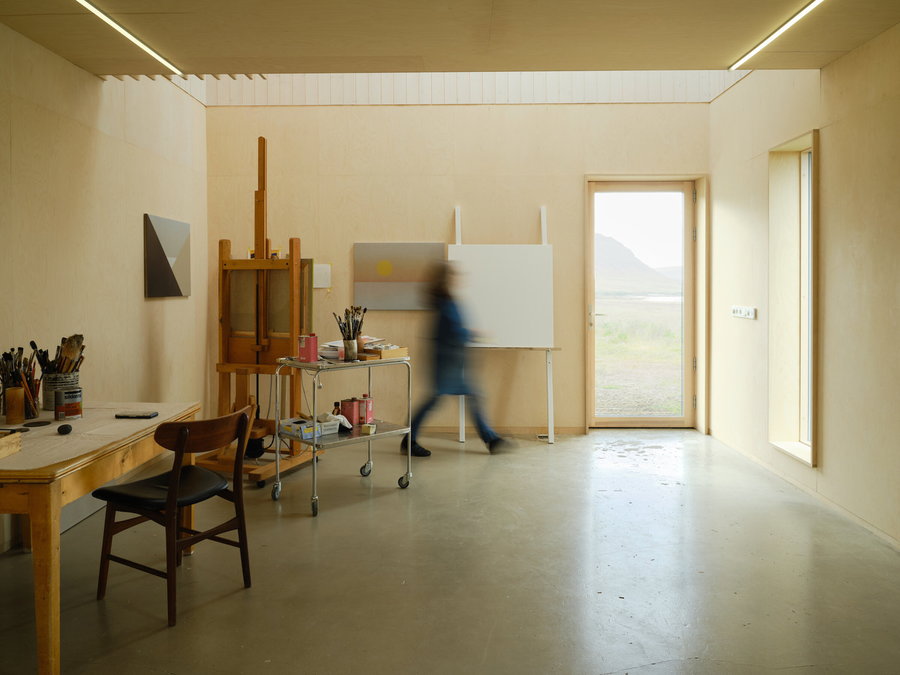 New openings were created sparingly to avoid compromising the structural integrity of the old concrete shell. One was added to let more light into the kitchen, and another adds a separate entrance to the art studio so the homeowners can move large artworks in and out. Both the new openings and the original ones were diamond-cut to a smooth surface that contrasts with the roughness of the outer facade. On the ground floor, Studio Bua placed a kitchen and dining space adjacent to the studio, giving them all a floor of polished concrete. 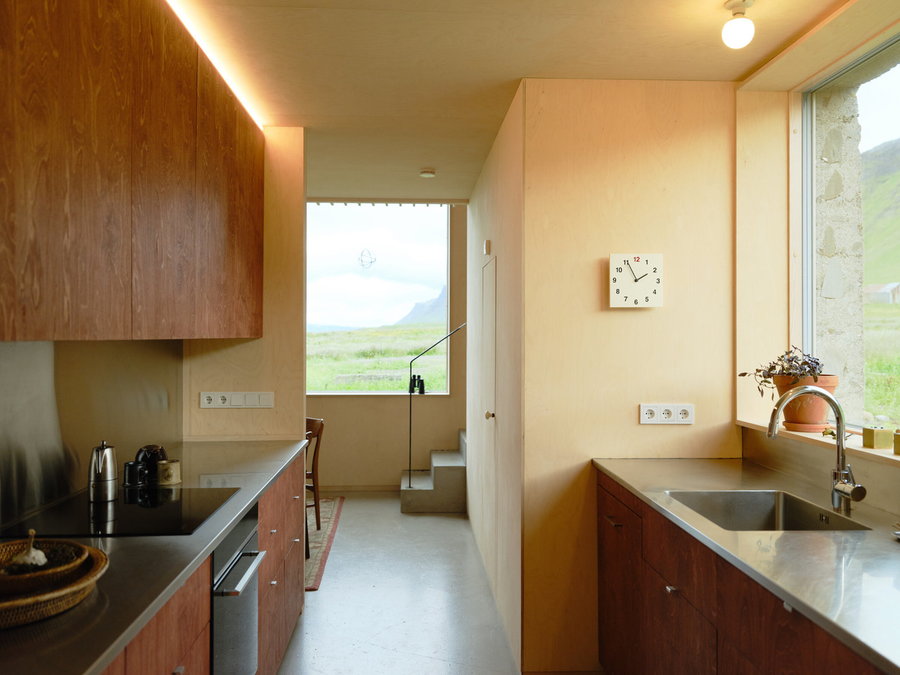 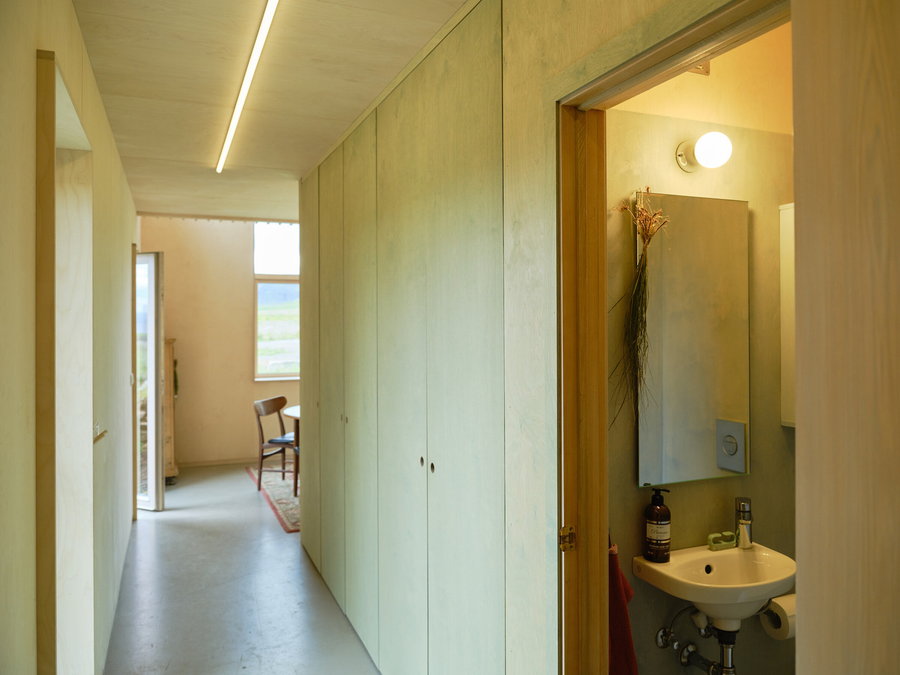 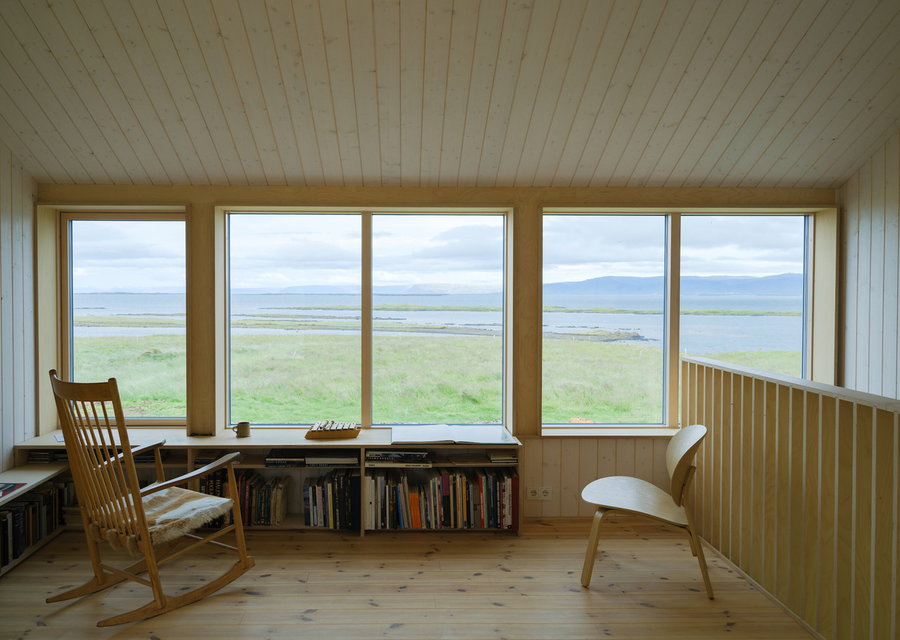 The client, an artist, had previous experience staining plywood and wanted to experiment with adding light washes of color to the birch walls. She and the architects collaborated on a palette inspired by the colors of the meadow as they shift from green in spring to yellow in winter and purple in late summer. On the second floor, the white stained pine boards and plywood surfaces are left in their natural color to complement the darkness of the concrete and stone. A plywood staircase leads from the ground floor dining room to a mezzanine sitting room overlooking a double-height space, with both rooms taking advantage of the massive amount of daylight emanating from a fully-glazed end facade. 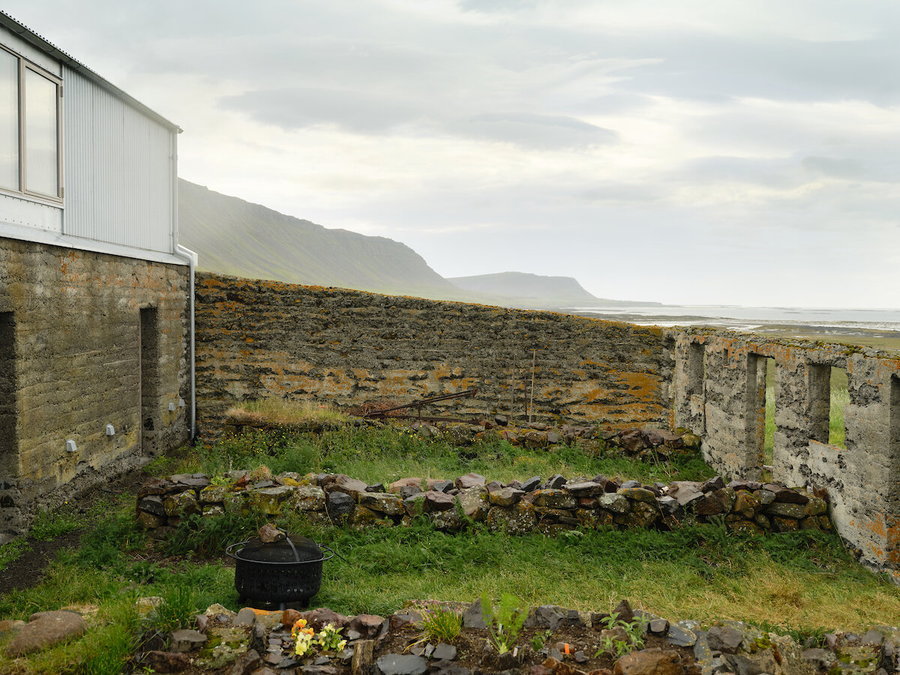 Outside, the walled garden might just be the coolest part of this old-meets-modern renovation. Protected from both strong winds and hungry wildlife, the garden preserves the framed views of the original windows and doors, now open to the air, and uses the remains of the original interior walls as row dividers.

The architects also chose a number of materials that are uniquely Icelandic in character. They explain that “the cladding of the new volume is corrugated Aluzinc – a reflective material that takes the color of the sky and meadow around the house, changing with the seasons and weather embodying the lightness of the inserted volume. This allowed us to extend to a second story without overpowering the concrete barn. From our experience working in harsh climates, this rather industrial material is one of the few cladding options that can withstand the extremes of weather.” 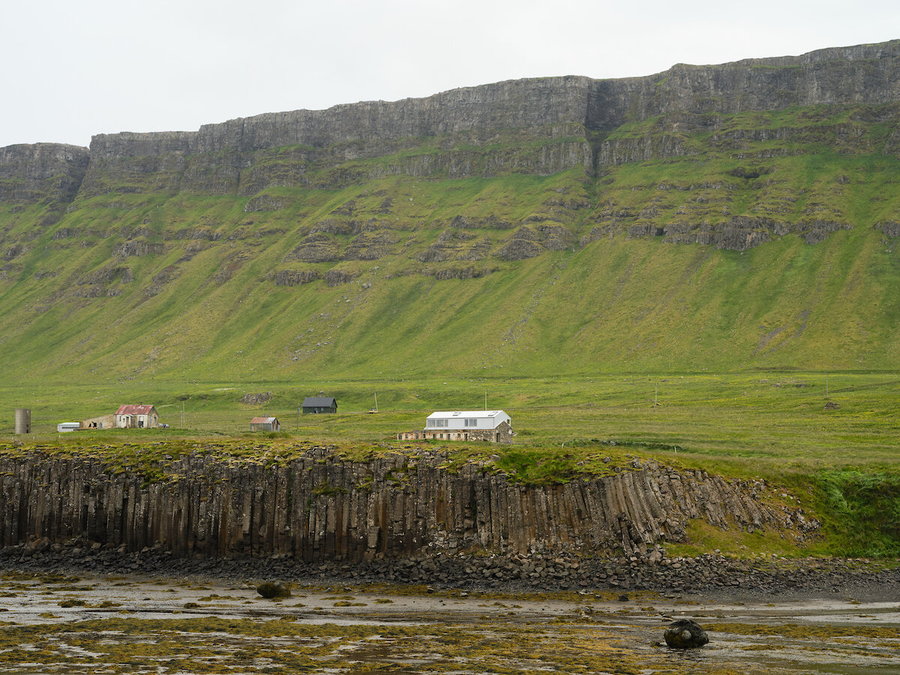 “The corrugation is also a reference to a local building tradition. From the early 20th century corrugated steel has been used diffusely in Iceland in rural and urban settings for all typologies. Most dwellings and farm buildings in the area are partly or completely clad in this material.”