When the Tetra Shed first debuted in 2012 as a faceted modular living unit, it seemed unlikely that it would ever become a reality. It had a strange silhouette unlike anything typically seen in residential architecture, with its triangular doorway, distorted hexagonal footprint, and the irregular planes of its roof and walls. It looked like the sort of 3D architectural renderings that get a brief flurry of attention on the internet and then fade away forever, never to actually be constructed. But this modular building system is real, all right. 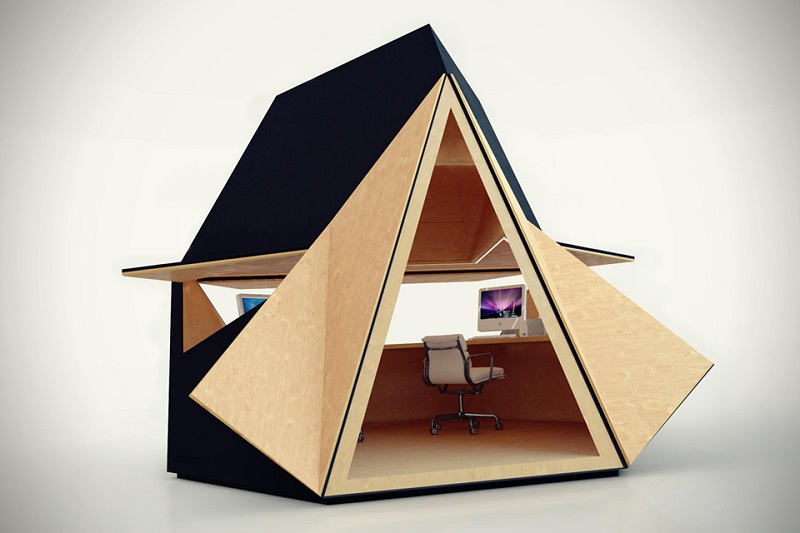 The first prototype appeared at the self build event Grand Designs Live London, and then the shed became available on a wide scale throughout the UK and Europe for £15,000. Consumers could choose from a variety of finishes, fittings, and extras like ambient LED lighting, underfloor heating, and built-in wall speakers. Though initially envisioned as a backyard studio, the Tetra Shed was large enough to be used as a detached guest suite, too. Free downloadable apps even allowed users to control the lighting and heating from their smartphones. 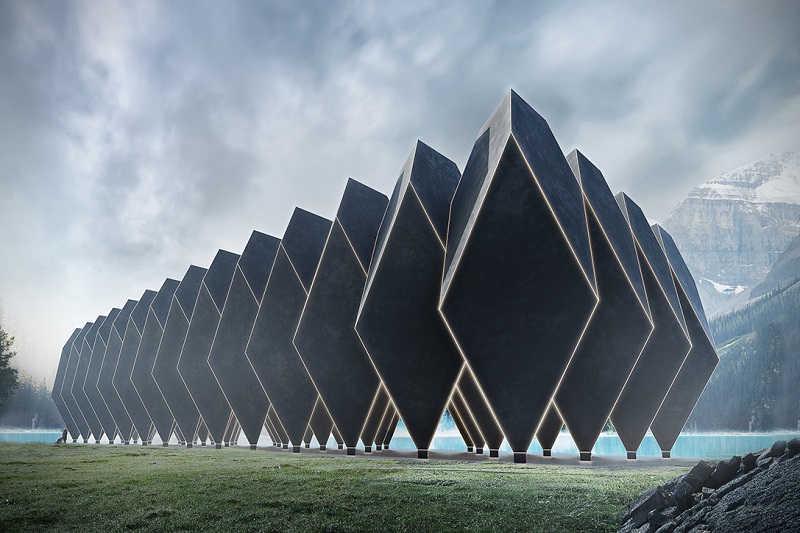 Well, RIP Tetra Shed, and long live the Tetra Hotel. Architect David Ajasa-Adekunle of Innovation Imperative recently announced that his original creation had “evolved” and would no longer be available for consumer purchase. Taking its place is an equally strange structure on a much more ambitious scale. It’s almost like the Tetra Shed started auto-reproducing itself and arranging its new, sleeker offspring into the cells of a larger organism.

These new pods are shaped more like diamonds, stretching multiple stories into the air side-by-side. Instead of a single floor with just a few square meters of living space, each pod contains four levels, consisting of a bathroom, an office, a living room, and a lofted bedroom. The interiors are sharply minimalist and lined in plywood. They’re windowless, making them feel a bit cavelike, though a triangular skylight tops each one to allow for the entrance of natural light by day and stargazing by night. 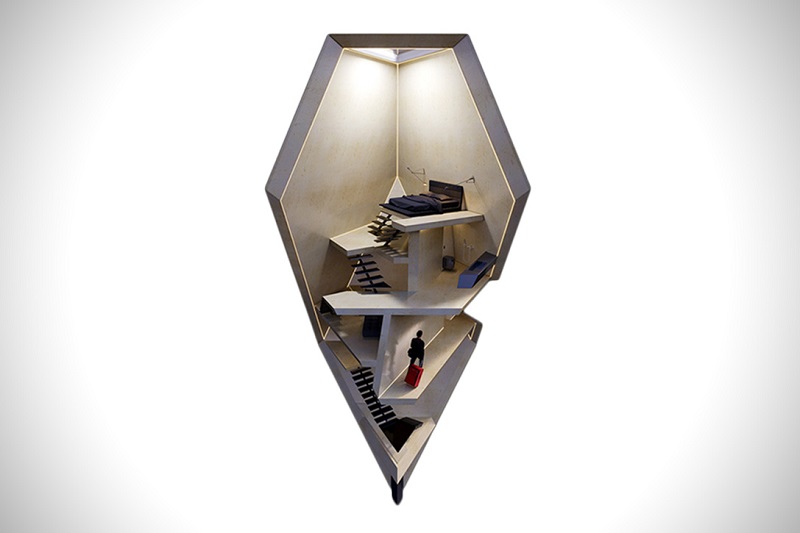 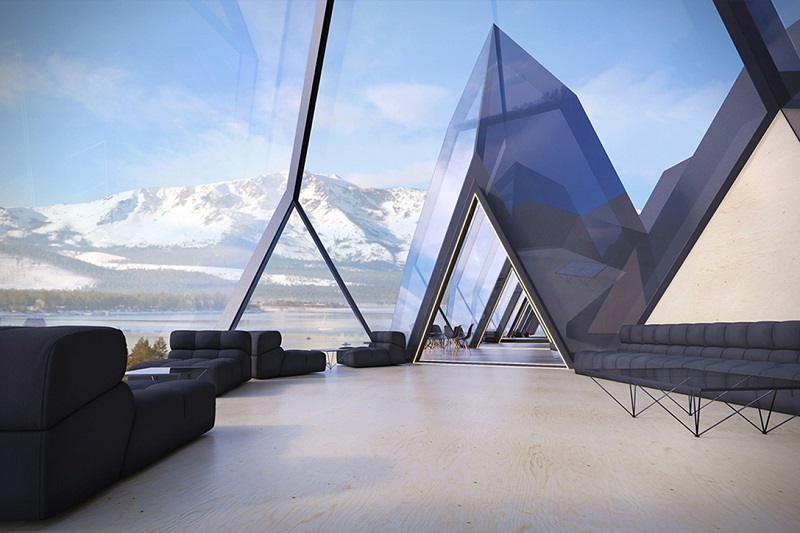 The architect hasn’t released many details about the project, but renderings appear to depict the rooms attached to spacious common areas inside faceted glass volumes of the same shape. Modular, portable, and apparently infinitely expandable, the hotel units come together to create a gaggle of ultra-private suites that can be placed virtually anywhere in the world, including the shores of remote mountain lakes with views of snow-capped peaks. 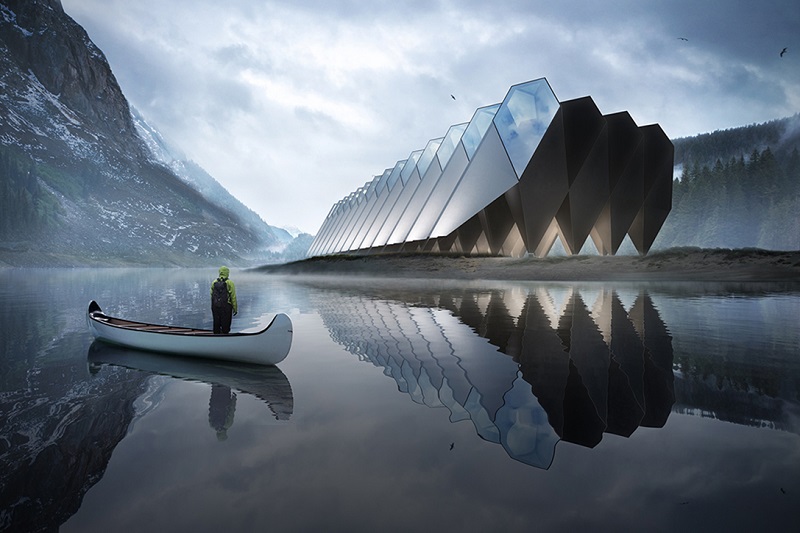 Considering that portable modular hotels are already in place in some remote locations (i.e. glass geodesic domes throughout the Arctic Circle), it seems like the Tetra Hotel has a good chance of becoming a physical reality. Its creators have already proven that they’re capable of following through on a cool-looking concept like the Tetra Shed, which came as a kit of lightweight handleable panels designed primarily for self-assembly. 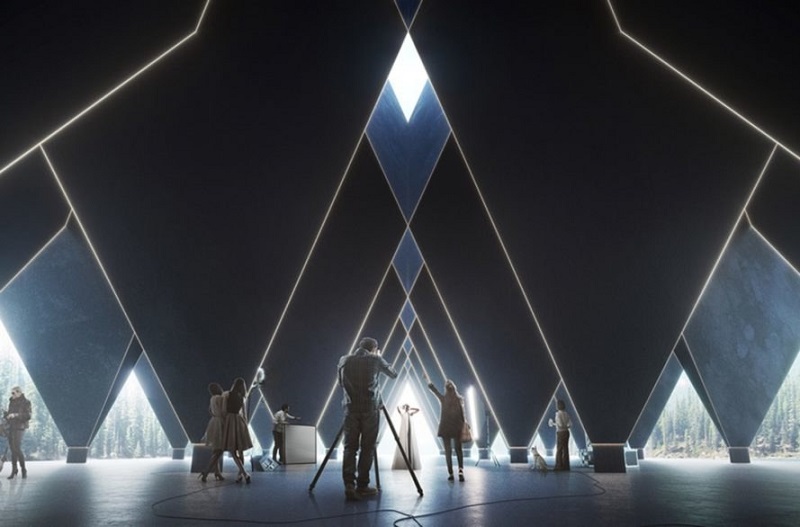 Some people might find the Tetra Hotel’s design a bit dystopian — especially the way the solid black shapes loom over the landscape on narrow supports resembling feet. But this design gives the hotel a light footprint on its chosen setting, which is a must in sensitive environments. Likely to appeal to adventurers with an appreciation for futuristic design, the Tetra Hotel definitely offers some outside-the-box accommodations.